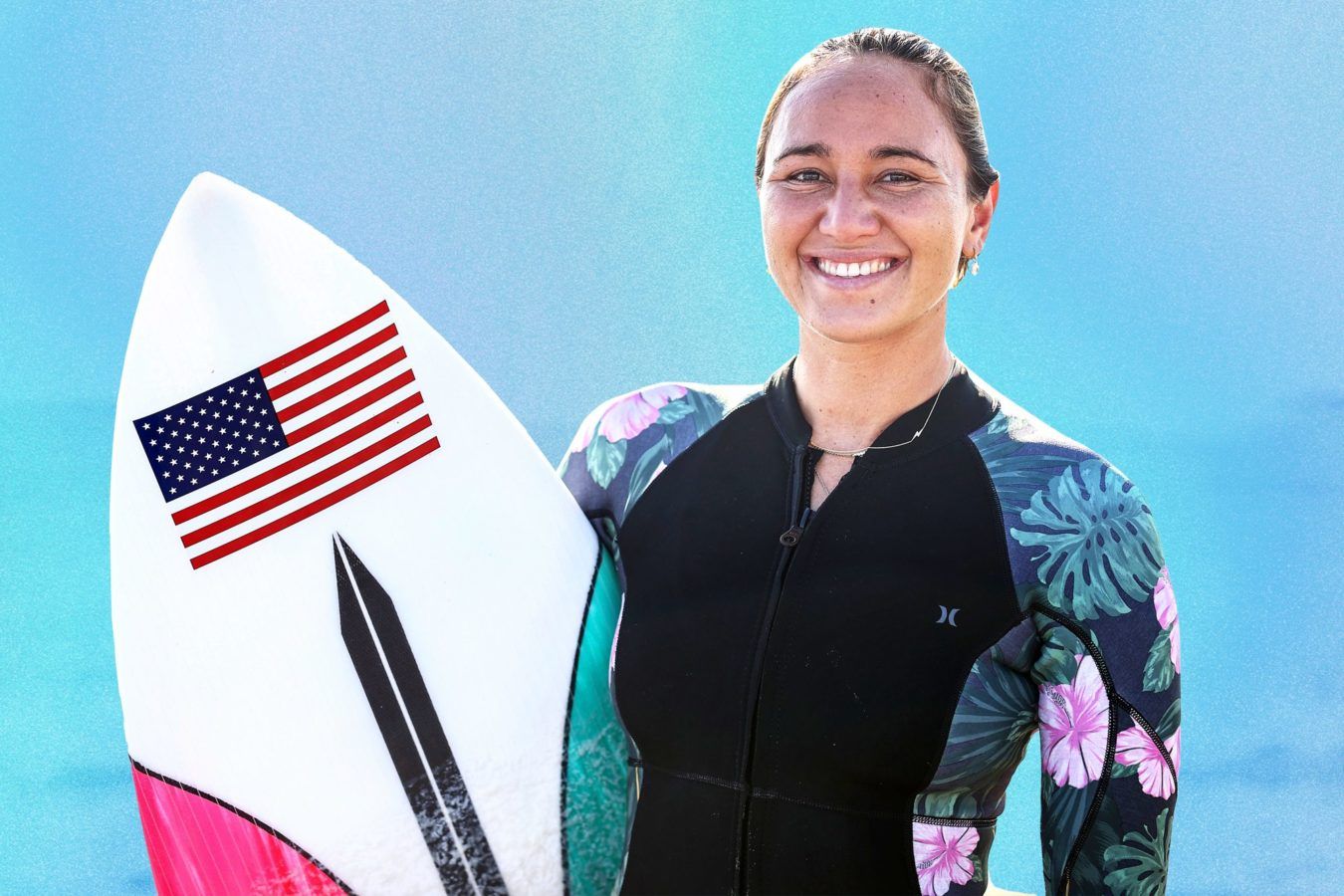 American surfer Carissa Moore didn’t know how her journey would unfold at this summer’s Tokyo Games when surfing made its long-awaited Olympics debut. The 29-year-old athlete prepared the best she could and ultimately made history in the process — winning the first-ever gold medal for women’s surfing.

“It was an incredible experience just to be a part of the Olympics for the first time,” Carissa Moore tells Shape. “I didn’t really have any expectations going in and with the pandemic, COVID, with all the different regulations and things we had to follow, I hear that it wasn’t the normal Olympic experience, but I still enjoyed every second of it. It was fun bonding with the team and getting to surf the venue and all of the experiences that were involved with it.”

A native of Hawaii, Moore started surfing at a young age, thanks in part to her father, Chris. “He’s just an all-around waterman that loved being in the ocean,” she says. He was a competitive open-water swimmer (ICYDK, open water swimming events can take place anywhere but a swimming pool), and he just surfed for fun, she says. “He introduced me to surfing to share his love for the ocean with me. It was just our time to spend together and he always jokes around, but his goal was to make me fall in love with the ocean so that I’d never leave Hawaii — and mission accomplished.”

While growing up, Moore took part in amateur surfing contests. And by the age of 10, she decided that surfing was her passion and wanted to see just how far she could go. When the International Olympic Committee announced in 2016 that surfing would be part of the Olympic competition in the Tokyo Games, Moore, though a bit hesitant at first, wanted in. “When I first found out that surfing was going to be in the Olympics, it was new and exciting, but there was also some hesitancy involved too because, ‘Oh, what it’s going to be like? How’s it going to be run? How’s the qualification going to work? Where are they holding it?’ There are so many different variables, and change and newness can be kind of scary sometimes,” she says. “But there was an overall excitement and I just would love to be a part of it.”

Regardless, Moore says she decided to prepare like this was “any other event.” “You’re really just putting on a jersey, you’re surfing the same time frame, trying to get two waves,” she says. “The goals are the same, and you’re just taking it heat-by-heat. I surfed almost every day at home, and was still competing on the World Surf League Championship Tour, so I felt like that was a great way to hone my skills and stay on top of things… Two-and-half to three weeks before we went to Tokyo, I was trying to find waves on Oahu that stimulated the same conditions that we might have had in Japan.”

The surfing competition at the Tokyo Olympics took place at Tsurigasaki Surfing Beach in Chiba, Japan. Leading up to the main event, Moore had a lot on her mind. “The Olympics carried a lot of weight and it meant a lot to a lot of people, and it felt extra special because I was surfing for something bigger than myself,” says Moore. “Especially being a Hawaiian, I’m representing surfing, which is our sport, the sport that started with my ancestors, so I felt a special connection to that and wanting to represent our people and the Hawaiian islands really well.”

Moore ultimately did Hawaii proud; she put up a gold medal-winning performance with a score of 14.83. (FYI, the surfing cores at the Olympics are based on five criteria: commitment and degree of difficulty, innovative and progressive manoeuvres, variety of manoeuvres, a combination of major manoeuvres, and speed, power, and flow).

Spending time in the waves wasn’t the only way Moore prepped for Tokyo. When it comes to staying in surfing shape physically, Moore relies on HIIT and cardio-focused workouts. “I think one of the coolest things about surfing, and maybe the under-appreciated parts of it, is that literally, you have to be fit in all different aspects. You need to have good endurance for long days of competition, you need to have a good upper body for paddling, a strong lower body for power and pushing through your turns,” she says. “You have to be flexible because you’re constantly moving and in different positions. You have to be agile cause sometimes you’re putting a turn in and then going really fast into another turn and all the movements are generated from your core.”

Moore, who works with a trainer three times a week, also tweaks her workout routines depending on the event she may be competing in. “Sometimes it’s more like agility and speed, but there’s always an overall theme to everything, doing a little bit of everything,” she explains. “And then I do Pilates once a week, and I do yoga almost every morning for 20 minutes.”

Looking back at her Olympic experience, while Moore is “really happy” with how she prepared for the Games, she also learned an important lesson about self-love along the way. “I think something that I want to try to continue doing is just to continue being kinder to myself and not be so hard on myself,” she says. “To know that, ‘hey, mistakes are okay, they’re actually going to end up shaping you into a better athlete and person, so just embrace them and embrace the journey.'”

Due to COVID-19 restrictions, all spectators were barred from attending the Tokyo Games. Moore, much like other athletes, was unable to have her support system nearby, which included her father and her husband, Luke Untermann. Flying solo, Moore ultimately relied on herself to persevere. “I was on my own in a lot of ways, and as someone who’s kind of struggled to feel comfortable in her own skin, and back myself and my decisions, and just feel confident in myself, it was really empowering to go to these Games and be like, ‘hey, I got this,’ and trusted myself. It was validating to see the result come through from that.”

With the 2024 Olympics in Paris about three years away, Moore has given thought to potentially defending her gold medal title at the future event. “I would love to try to qualify for the next Olympics, so that’s definitely a goal,” she says. “I just had such a wonderful experience this time. To be able to do it again, and be a part of it, would be super cool. We’ll see what happens.”