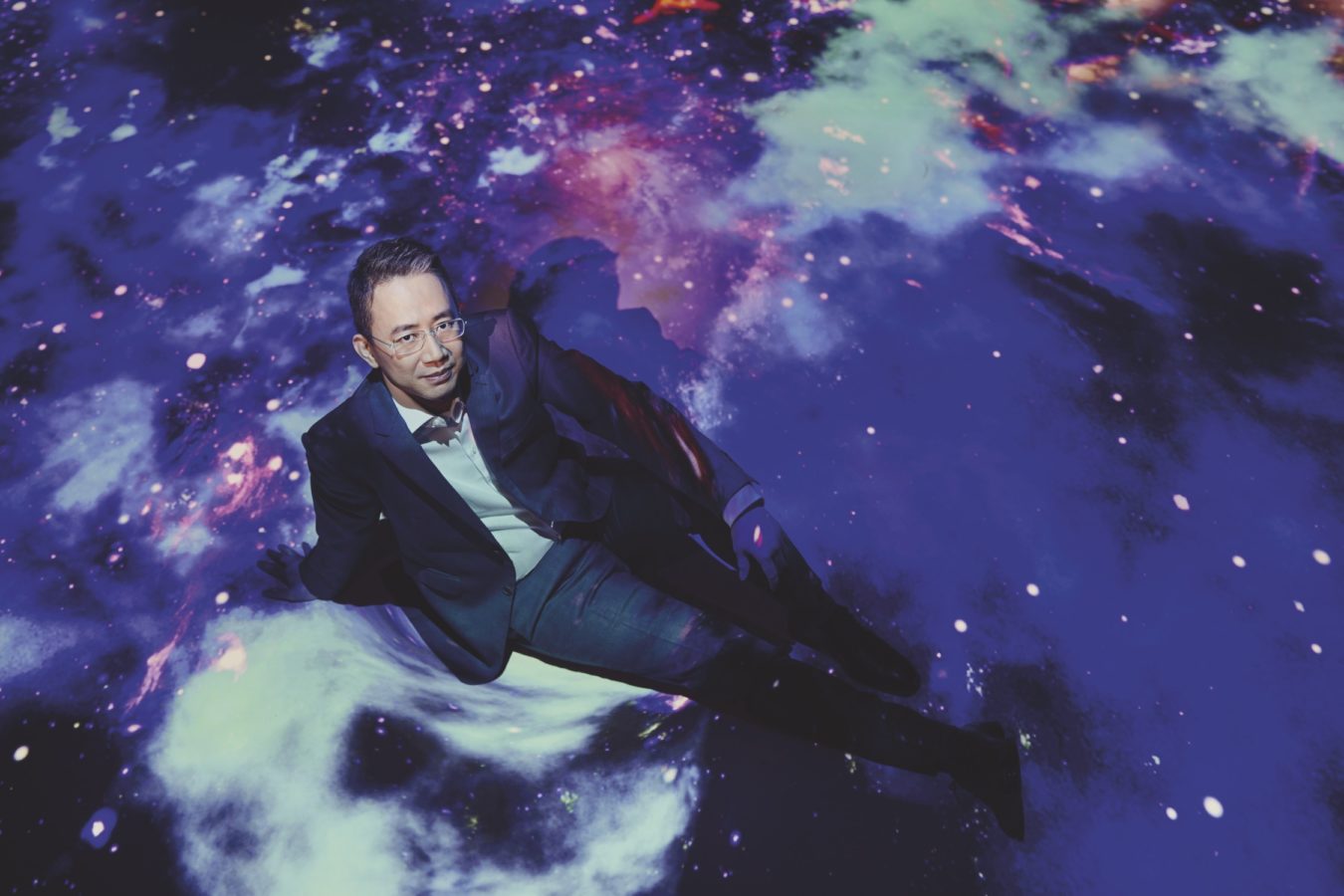 He’s illuminated stadiums and landmarks in kaleidoscopes, and broken records of Olympic scale. Nothing is too far a stretch of the imagination for Adrian Goh, Group Managing Director of Hexogon Solution.

Adrian Goh’s quiet confidence belies the riot that lives in his mind. “I have crazy ideas all the time,” he says. Palpable evidence of this manifested in 2015 when Hexogon Solution shocked the audiovisual industry by participating in both the Opening Ceremony of the 28th Southeast Asian Games (SEA Games) and the Golden Jubilee National Day Parade, which overlapped in schedule.

Juggling the two events would be a mammoth feat, as Hexogon would not be able to re-use the same equipment. Goh went on to break a record with the largest purchase of Christie projectors at the time for the SEA Games. Some 160 were mounted on 20 towers of the National Stadium for a fantastical multimedia sequence projected on the floor.

Hexogon’s expansion of its fleet in rapid time paid off. It achieved The Greatest Light Output in a single event at a total brightness of 3.2 million lumens, dwarfing not only the previous record by 200 per cent, but other Olympic-scale projection mappings including the 2008 Beijing Olympic Games Opening Ceremony.

The labour-intensive Golden Jubilee celebration in Singapore was simultaneously executed. At the National Day Parade (NDP), motion graphics and 3D effects were projected on the floor of the Padang to complement the movements of 3,500 dancers. Festivities were extended to the Merlion in Sentosa and The Fullerton Hotel, where projection mapping shows synchronised. “We ran the show at three locations concurrently and monitored more than 120 Christie projectors.”

Ambitious as they were, the events reflect Adrian’s mindset that you must not only love what you do, but “show others how it can be done with flair”.

His ideas take shape with a sounding board. “I need someone by my side to listen to my nonsense that sometimes may not make sense and stop me from dreaming when necessary.” His wife Marie Kong, who is Marketing Director of Hexogon, is his go-to now, but his father once filled the role until he suffered a stroke.

While he provided Adrian and his siblings an “incredibly happy childhood”, things took a turn when his business went south. Adrian gave up his first love of music, deciding not to push for expensive tuition and exams. In secondary school, he found his footing in the arts and later enrolled in Lasalle International Fashion School. Let there be light
Adrian’s success did not come easy. Once banned from class for not paying his school fees on time, he worked as a technician in school so that half of his fees would be waived, and it also helped to pay off project expenses and his family’s finances. “I lived and slept in school, and worked very long hours,” Adrian explains. But he never lost his passion for the arts. “I did not let money come in between me and my creativity.”

Those tough times were shouldered with the support of his classmates and lecturer. Adrian worked his way up, building his portfolio and business contacts through freelance projects. After a year working for FJ Benjamin, he started his own company. “Situations often do not turn out the way we expect. Plans will change, and we need to adapt,” he asserts.

In 1997, Adrian founded Mozz Creation, which specialised in window displays, exhibitions and trade shows. This expanded to digital printing, luxury boutique renovation and events. His fortunes changed once more when he stumbled upon small-scale projection mapping. His knowledge of it was limited. “My team and I had no clue on how to do it, what was required or the investment involved,” says Adrian.

References were also few. “Projection mapping was not popular and often very expensive to carry out in the region.” Buoyed by a leap of faith, they tried the “hard-working way”. They began mapping on various 3D objects with content generated in-house, armed only with the basic concept of 3D projection mapping and an office projector. “A few bumps later, we worked out our way of doing things.”

In 2008, the company was privatised and renamed as Hexogon Solution. Today, it has subsidiaries abroad including Thailand, Taiwan, Japan, Hong Kong and Vietnam. It counts festivals, ceremonies and mega events as its bread and butter, including the Marina Bay Countdown and Singapore’s NDPs – eight of which Hexogon has worked on so far.

Memorably in 2016, it projection mapped a Sky City at National Stadium. The scale of real-time 3D tracking had never been done before and it remains the largest to date. Hexogon executed 360-degree real-time tracking with digital projection mapping onto two objects – a large moving boulder split into eight and the Sky City of 15 towering collapsible fabric structures.

Radical regrouping
After its best year in 2019, illusions of another record year were shattered by the pandemic. Hexogon has faced massive cancellations and postponements, many of which Adrian anticipates will lead up to the first quarter of 2021.

But with his signature grit, he’s not letting it get the best of him and his team. “Having sailed through at least three crises since I started Mozz Creation, we are better prepared now.” The company’s financial stability has prevented retrenchments and pay cuts, aiding Adrian’s priority of ensuring his team “think positive and stay mentally strong”. He is confident about Hexogon’s resilience. “Just like how we started digital projection mapping in the initial stages, we will prevail. We will navigate through rough waters and make things work.”

Adrian proves he’s adept at working with what’s he got, having pulled off the first indoor National Day celebration this year. He describes the intimate evening show at Star Vista Performing Arts Centre as the most challenging National Day project the group has faced, considering its short timeline for technical planning, screen fabrication and animation content.

The import of specific equipment from other offices and materials was also delayed, reducing installation time. The crew also had to adapt to new working practices and fortnightly swab tests. Yet, the indoor event meant less pressure without the “heart attack moment” of every parade. “Typically, there’s no way of telling if the projection aligns with daylight until the last minute.”

Adrian has also made some unique moves this pandemic – one of them being a substantial investment in getting the company’s foreign workers out of the dormitory and into a hotel to prevent infections from other migrant workers.

As for now, Hexogon is now moving into the virtual and augmented reality space online, and looking to expand to more countries. He hints at “another rough sea to sail through”, as he attempts to venture into sustainability and healthcare in the long term.

In a world without limits, Adrian dreams of creating a mega multimedia projection mapping show onto the entire Singapore city skyline. “That’s a new world record unlikely to be broken anytime in the near future,” he concludes. But if his incredible track record is anything to go by, this vision will likely happen in due time.