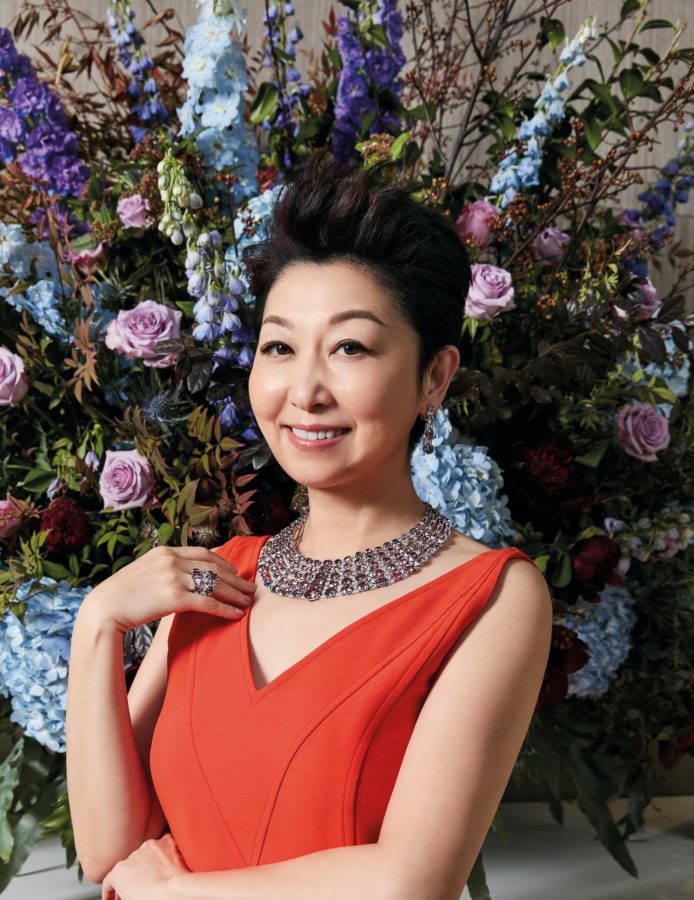 At the end of a three-hour chat in Jin Lu’s well-appointed dining room, Roosevelt’s oft-quoted words, “speaks softly and carries a big stick” come to mind.

Although the context is different – the 32nd US president was referring to using diplomacy first and force later when required, the meaning in Lu’s context is more literal. Disarmingly charming with a soothing and melodious voice, her mellow demeanour belies a strong and dynamic character. Her past achievements and her body of community work are testimony to these qualities.

Lu has worn many hats in her life, and she has worn them all well. Born in Beijing during the Cultural Revolution to an actor-turned-theatre-manager father and a soprano mother, she put her Spanish degree from the Beijing International Studies University to use in her first job as a translator, and then as a domestic tour guide for foreigners travelling with China’s only state-owned travel agency at that time. The job took the intrepid traveller to exotic locations like the Silk Road and sparked off her wanderlust and curiosity about the world which led her to Hong Kong where she took up a public relations role at a TV station.

While in Hong Kong, Lu met a senior from university who later became her husband. Together they started Golden Meditech, an integrated healthcare enterprise which was listed on the Hong Kong Stock Exchange in 2001 (delisted in 2020). Although she casually attributes their success to being lucky and willing to learn, one can only imagine the grit she must possess to have overcome the challenges she encountered along the way.

To better herself in managing a company and also to be on a par with the experts and executives that Lu had to work with within and outside the company, she enrolled in the EMBA programme at Guanghua School of Management at Peking University in 2003 and graduated in 2005. Business expansion brought her to Singapore in 2007. In 2012, she resigned from her position as executive director at Golden Meditech to become a non-executive director at Cordlife, a leading provider of cord blood banking.

Despite her successes, the naturalised Singaporean decided to give up her career in 2014 to focus on raising her children. And motherhood is a role she is fully immersed in. She cooks for her family and manages her 9,000 sq ft penthouse home in District 9 without a live-in maid. She does it so well that her children only knew her in her role as mother and homemaker, and nothing much about her high-flying past. So while wanting to give back had always been on her mind, Lu says that the push to actively get involved in community work came from wanting to inspire her children. “After all, the best way to teach children is by example.”

And she has succeeded in teaching her children empathy, despite their privileged background. In following in their mother’s footsteps to give back, Lu’s 19-year-old son volunteered at United Women Singapore (previously UN Women Singapore) for two years, while her 15-year-old daughter (with her help) designed and made cards to raise funds for Cambodian causes. And these are just two examples of the teenagers’ numerous charitable efforts.

Lu’s skills and experiences mean that she will add value to the organisations she volunteers at. From 2013 to 2018, she was actively involved at the Parent-Teacher Association at Tanglin Trust School where her son studied and her daughter is still studying. In 2014, Lu joined the board at United Women Singapore where she is currently the treasurer. She is passionate about championing women’s rights and believes that educating a girl is the best way to empower her: “One of our projects is STEM which challenges the stereotype that subjects (and the relevant careers that these lead to) like science, technology, engineering and mathematics are only for boys.”

A firm believer in instilling the correct values and conditioning a child the right way since young, Lu also tells us about United Women Singapore’s plans for 2021 which includes Boys Empowered, an initiative that aims to reach out to boys of all racial and ethnic backgrounds to redefine male stereotypes. The objective is to prevent gender-based violence and discrimination.

Lu has also been on the board of directors at the Singapore Repertory Theatre (SRT) since 2019 (although she has been an active supporter even before that). Fundraising for the theatre is a subject close to her heart. “I love the stage since I literally grew up in a theatre,” she gushes, referencing her childhood. “The past year has been a challenging one for many, particularly those in performing arts,” says Lu who, together with the board, will be looking into ways to rejuvenate public interest and getting more support from different sectors including the Government.

Her passion for community work is palpable. Besides the SRT and United Women Singapore, her philanthropic involvement includes the Association of Women for Action and Research, Chinese Women’s Association, KK Women’s & Children’s Hospital and The Red Pencil in Singapore. When talking about these, her voice takes on a more animated lilt and there is a happy glow on her face. Lu clearly thrives on being able to help someone, the high that she gets from making a difference, and from sharing the story with others.

Creating wonderful experiences and the stories that come with them is one of the ways that one of her favourite brands, Louis Vuitton, has
earned her loyalty. In the 20 years since she bought her first Louis Vuitton item – a monogrammed key pouch, her relationship with the luxury brand has only grown from strength to strength. While it was the accessory’s durability that first impressed her, it is the brand’s quest for excellence as it expands over the years even into furniture and high jewellery that has the super-achieving perfectionist hooked as she too grows in her career and personal life.

While speaking of her relationship with the brand, she recalls some of the pieces that she has bought over the years that marked significant milestones in her life, often sharing an anecdote about a piece. In 2002, she celebrated her son’s birth and the public listing of Golden Meditech with a limited-edition Louis Vuitton bag. In 2006, she bought another exclusive customised doctor’s bag, the Sac Louis, which was embossed with her and her daughter’s names to celebrate the latter’s birth.

So vast is her collection of Louis Vuitton that she cannot put an exact number to it off the top of her head, although one piece particularly stands out. Her Marc Jacobs Collector Bag, an eclectic patchwork of all of Jacobs’ handbag designs in a decade, is housed in a transparent trunk and takes pride of place in her home. Heavy and large, it is more an art piece than a wearable accessory.

Among Lu’s wearable accessories are many from Louis Vuitton, including some from the brand’s high jewellery collections. In 2015, she was on the brand’s much coveted invitation list for its annual high jewellery trip. The trip was to Sydney where she bought her first Louis Vuitton high jewellery pieces, an emerald necklace and earring set. Since then, she has been on three more of such overseas trips and has gone home with more showstoppers. One masterpiece she dons regularly is an opal set that is as beautiful as it is versatile.

As she takes out her conversation pieces, which includes a dazzling Conquêtes Regalia yellow sapphire, pearl and diamond necklace that she bought in Rome in 2018, Lu tells us about the exclusive experiences that Louis Vuitton crafts for its Very Important Clients on these trips – experiences that even money cannot buy. These include a tour of the Pope’s private quarters within the Vatican City.

Creating brand loyalty takes more than giving someone wonderful experiences. A client needs to feel that the brand resonates with them. When asked about her affinity with the brand, Lu says: “Louis Vuitton seeks to be the best and number one in whatever it sets out to do.” Sounds much like the interviewee herself.

While wearing some Louis Vuitton High Jewellery pieces during the photo shoot for this article, it is clear that its latest Stellar Times by Francesca Amfitheatrof is made with women like Lu in mind. Conjuring the idea of interstellar travel through gemstones, which symbolise the different planets in the solar system, Louis Vuitton has created a collection that ties in with the spirit of travel and adventure, which are just some of the qualities that Lu embodies.

Sign up to get the latest luxury and lifestyle news delivered to your inbox.
Mavis Teo
people