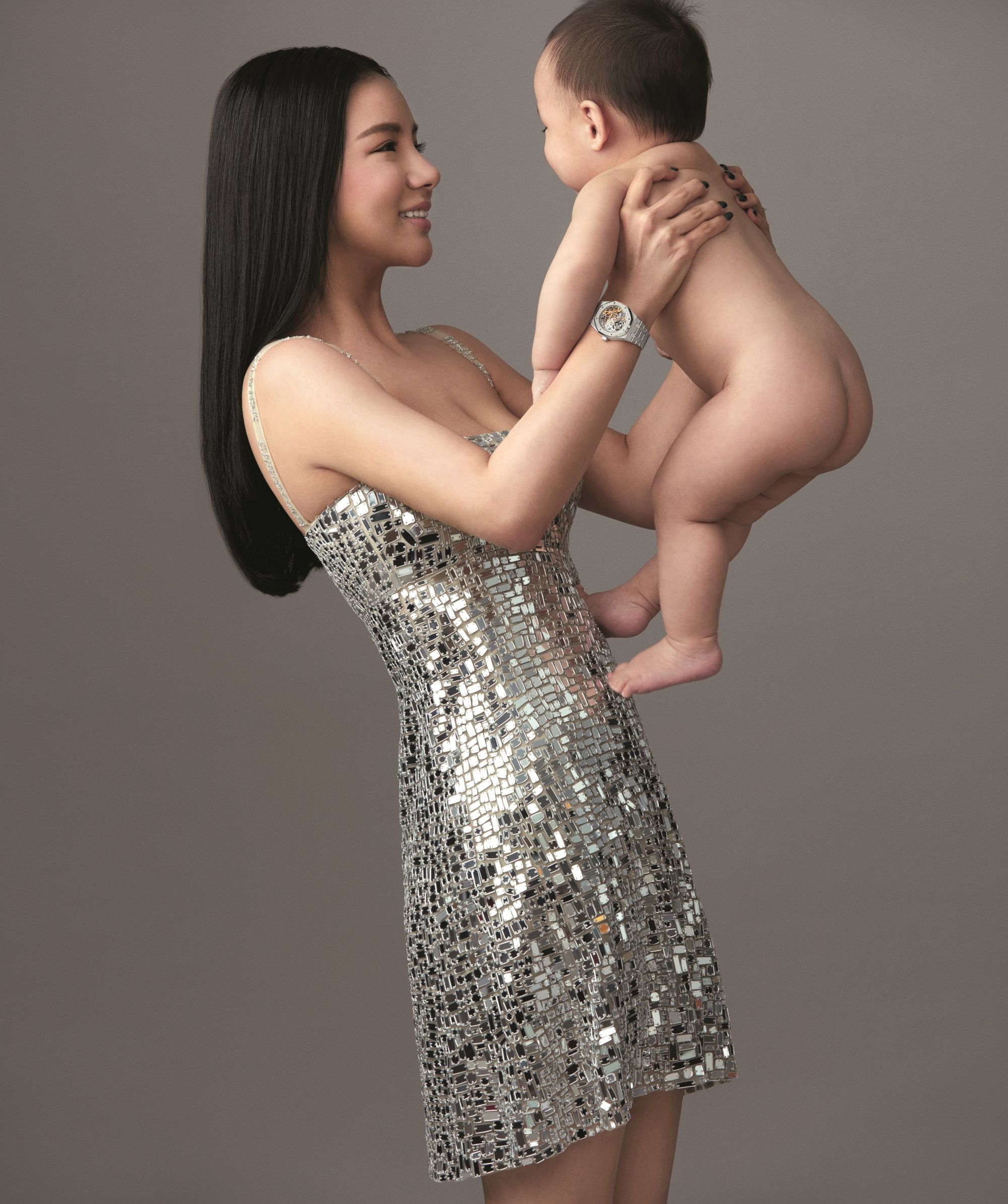 Kim Lim is on her phone. Expected, given she is one of Singapore’s biggest social media stars. But instead of updating her Instagram feed with a posed picture of her #ootd, Lim proceeds to record WhatsApp voice messages and sends them to a friend who has just given birth.

Turns out, she is giving her friend breastfeeding advice. “Yes babe, store the extra milk in the milk bag. Lay it flat in the freezer and don’t forget to write the date on it,” she dictates to her phone.

After a couple more exchanges, she looks up and apologises for having diverted her attention. “Sorry I don’t mean to be rude. My friend is new to this mum-thing and asked for help,” she explains.

Lim herself is relatively new to this whole “mum thing” but watching her dispense advice clearly and confidently, its clear the lady formerly known as a stylish young heiress has taken well to it.

“Motherhood is life-changing and if I can do that little bit to help my friends ease into their respective motherhood journey, I’ve done my job,” the 26-year-old says.

Kim Lim’s son Kyden Kho was born on July 18 last year. The arrival of her baby made headlines and surprised many — Lim had kept her pregnancy quiet. Even the way the news broke was rather unconventional.

Instead of an outright announcement, the baby’s birth was revealed when the national papers reported that Portuguese football superstar Cristiano Ronaldo had dropped in on her father, billionaire Peter Lim — not just for a business meeting but also to visit his new grandson.

Chaos ensued. Ronaldo’s fans got wind of his secret visit to the Thomson Medical Centre (TMC) and swarmed its main lobby. Security was called in to escort the Real Madrid playmaker up to Lim’s room. “We are good friends and had a laugh about the mayhem.

As for the birth announcement to be somewhat pegged to him, well… it isn’t a bad thing. One of my son’s first few visitors was a world-renowned footballer, imagine that!” she says with a chuckle.

No Worries About Weight

Why did she keep the pregnancy low-key? Kim Lim replies without hesitation: “Pregnancy is a very special time in a woman’s life and I wanted to enjoy it without having my Instagram followers or the public weigh in on something that personal. I wanted it to be a private affair right from the get-go.”

This she did by staying off social media for a good part of the nine months. The handful of Instagram posts she made during this period was generic and offered no hints at the bun in the oven. Lim describes it as “almost like a social media detox”, which helped to keep her calm and focused on staying healthy during the crucial months.

The pregnancy was smooth-sailing save for extreme nausea in the first three months. Things looked up at the end of the first trimester. This was when she started to crave local dishes such as mee pok and nasi lemak.

Like most expectant mothers, she started piling on the pounds. “I was worried but when you are pregnant, it’s not just about you anymore. Listen to your doctor and your body. Remember that the baby comes first, weight loss later!” Lim, who hits the gym four to five times a week these days, lets on.

And like other mothers-to-be, Lim worried about a host of other things. “I asked myself a ton of questions. Am I capable of taking care of a young baby? What if I don’t know how to stop him from crying? Or prepare a bottle of milk? A hundred what-ifs would cross my mind. At times, I would get really afraid.”

With the support of her close-knit family and husband BK Kho — whose details she wishes to keep private — Lim kept positive during the nine months. To prepare herself for Kyden’s arrival, she attended birthing classes and baby care courses at TMC. She read several books and researched topics extensively on the Internet. As an added measure, she also consulted friends with children to gain real-life insights into motherhood.

Another aspect of the preparation this fashion-forward millennial relished was shopping for her child. Kim Lim, who is the ambassador of premium baby store Motherswork, spent hours comparing and learning about baby products such as strollers, car seats, baby bottles and cots.

“It was fun to do research on all that. I read reviews online and asked my mum-friends for opinions. My weak spot? Let’s just say baby’s clothing is very hard to resist. It is quite possible Kyden has a larger wardrobe than mine!” she says with a laugh.

As part of her birth plan, Lim opted for an elective C-section. She says of the experience: “I was in good hands but couldn’t help feeling ultra-nervous. When the procedure started, I laid there in silence and suddenly heard this piercing cry. The doctor put Kyden in my arms and I was overcome with emotions. At that moment, I knew I would always do whatever it takes to look after him.”

Which she did from day one. Although the early days were focused on recovery from her C-section procedure, Kim Lim insisted on being hands-on as much as she could. Instead of leaving Kyden in the care of a confinement nanny at night, she chose to take the night shifts to establish an early bond with her baby.

She also breastfed him direct and often, in order to ensure a regular milk supply. Every spare moment was spent pumping to build a milk reserve for her newborn.

“Somehow motherhood gave me this determination to do what’s needed to ensure Kyden gets the best. And as cliché as it sounds, he gave my life new meaning. Everything I do, I do it for him.”

This includes postponing her wedding celebration that was initially planned for March this year. So caught up is she with Kyden, the couple is waiting until October to host guests. After all, the pair would rather not rush and stress themselves out for such a joyous affair. As she explains, “We want to enjoy our son, so the wedding is now a second priority.”

Now that she is a mother, Lim also goes out less and prefers quiet evenings at home. She brings Kyden on her trips, even though she doesn’t travel with help. Just three months ago, Lim and her husband brought Kyden to London where the couple had to attend some meetings.

They had fun traversing the streets as a family but Lim admits there were tough moments. For example, one instance when Lim had an appointment and left Kyden with her husband. But because the baby started crying, she had to rush back to pacify him. “He was actually hungry!” she reveals. “BK and I were panicking, but we have a good laugh about it now.”

On the same trip, Kyden, who was going through a period of sleep regression, kept his parents up till 5am. “It was challenging but I know that is part and parcel of motherhood. I cherish every moment, good or bad. You know what they say, the days are long but the years are short.”

Kim Lim, however, recognises the importance of me-time. She is utterly devoted to Kyden but also squeezes in time to do things for herself. Besides going on short solo trips to recharge, she also stays connected with her friends through regular lunch or drinks dates.

“To me it is about finding a balance as a parent. There is no point in being around your kids when you are angry with them or bear a grudge, thinking they are the reason you’re not able to do something. That’s not fair. So I divide my time and try to cater to both my and my baby’s needs,” she says with thought.

Kim Lim is thankful for her good network of support. Her helper of 20 years, Roselle, is her rock at home and helps with the day-to-day caring of her baby. Lim’s octogenarian grandmother is always eager to have her great-grandson come over to her home, while proud granddad Peter constantly fills in.

“When we were in London with my dad, he and my stepmum [Cherie Lim] took over Kyden and sent us out on a date. They were more than happy to spend time with him. In fact, I think my dad loves him more than he does me!” she jokes.

That Kim Lim prefers to keep her son out of the social media spotlight surprises many. After all, she has a following of more than 215,000 — wouldn’t a cute baby boy on her feed boost her likes and increase her popularity?

“While that may be true, it is not important to me. Come on, life is more than just about likes, right? My son deserves privacy and a normal childhood. He may or may not like the exposure, so for now, I would rather keep him out of it.”

Lim is a mother who walks her talk. Last October, when she threw an elaborate 99th-day bash for Kyden at The Ritz-Carlton, Millennia Singapore, guests were given a strict directive not to post photos of her child on social media. She communicated this on her invitations, in person, and in messages flashed across the ballroom screens.

Thus far, Lim has only featured photos of young Kyden with either his face turned away or largely hidden. In fact, the May cover of Prestige is the first time her son has been photographed publicly. And even then, she reminded us not to make a full reveal.

Does she foresee a popular Instagram future for Kyden? “Maybe when he is older? I haven’t thought much about it. I’ll take it when it comes.”

One thing Kim Lim has carefully considered is her son’s upbringing. An important trait she would like to inculcate in him is a giving heart. She wants him to learn to give back to others in need, just like her father had taught her.

She’s already kick-started this by bringing him along to sessions with Operation Red Shirt, a non-profit organisation that distributes food supplies to needy families. Lim has participated in these activities since she was younger.

“Like all parents, I want him to grow up to be a good person, to have a strong sense of what is right and wrong. He should treat others with respect and appreciate what he’s been blessed with,” she says.

She is trying to set the right foundation by spending quality time with him. But what exactly is fun for an eight-month-old?

“We go to the supermarket and he keeps so quiet; maybe it’s the colourful aisles or the tall shelves. With Kyden, I don’t have to be anywhere special for the moment to be significant. It doesn’t matter where I am; it is the memories we make that count.”