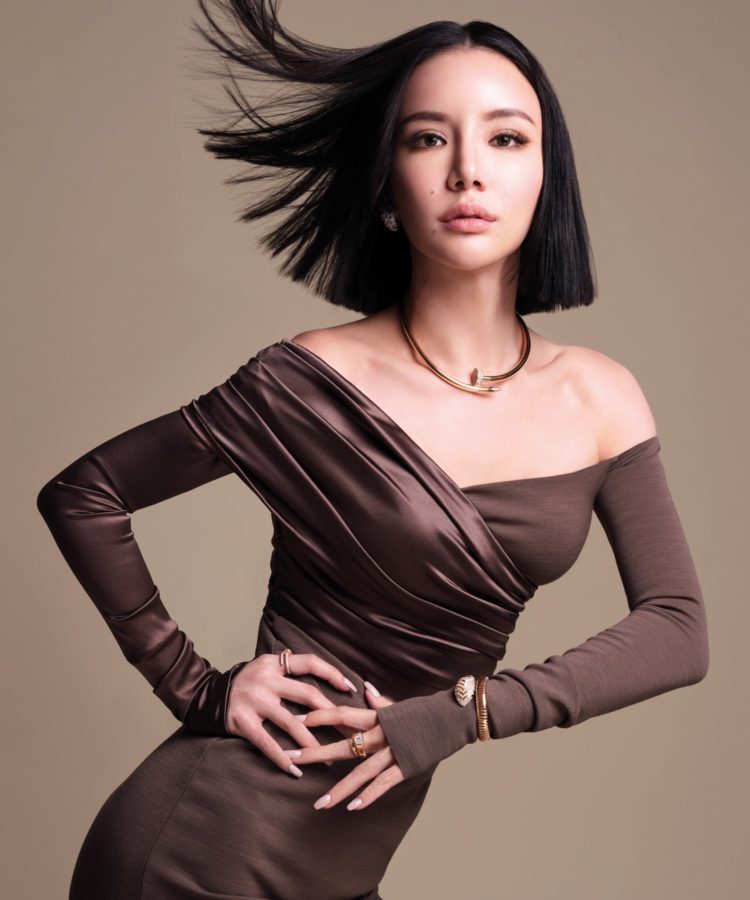 Say what you will about heiress and fashion royalty Kim Lim. Standing solidly on her ambitions to make Singapore a world-class aesthetics destination, she tells Prestige about her journey as a bona fide entrepreneur.

On set, Kim Lim exemplifies the conventions of celebrity: the high-fashion poses, the impeccable hair, the flawless complexion, the poise in front of the camera.

If she struggles with poor body image and self-esteem, I’d be hard- pressed to notice. Yet, in a profile three years ago, she got real about her battle with bulimia. “I’ve always felt insecure about myself,” she says, when I brought it up at our tête-à-tête, post-shoot. “I was fighting with myself in the mirror. I’ll find something I don’t like and I’ll harp on it. I know it’s not good. I’m working on it.”

This pursuit of “perfection” propelled and consumed Kim. She spent the last decade undergoing all kinds of facial and body procedures in Singapore and abroad. You name it, she’s done it. “That’s how I know what works and what doesn’t,” she explains. “I learnt that aesthetic work is as much science as it is an art. Two clinics can have the same machines, but the different operation techniques can have different outcomes. It’s the same with doctors. They can offer the same treatments and produce different results, depending on their skills and experience.”

Over time, she inevitably became a savant in cosmetology. “I’ve been studying the beauty industry since I was 19,” she goes on. “Through my travels, I got to experience different kinds of treatments and techniques outside of Singapore. I saw a gap. I thought, you know, I can bring in the best.”

In 2019, two years after the birth of her son Kyden, now four, Kim opened Papilla Haircare, a treatment centre in Ngee Ann City that specialises in hair loss and scalp conditions. She later expanded the brand with a product range formulated by Korean dermatologists. Today, she spends most of her working hours at Illumia, a swanky medical spa and aesthetic clinic located at Wheelock Place that offers a wide range of non-surgical and non-invasive procedures such as facelifts, eye bag reduction, nose threadlift and body sculpting.

Of course, Kim had help from her father, Peter Lim: Singaporean tycoon and owner of Valencia football club with a net worth north of $2 billion. He gave her some seed funding, but that’s as far as his support went. “He told me, ‘I’m giving you this to start, but if you run out of money, or you don’t make it, that’s it, you close,” she adds. “He didn’t groom me or anything. He’s always believed that you either have it in you, or you don’t. In fact, I think my father didn’t really believe that my business was going to do so well. He never said it out loud, but he did say that the money was for me to learn.”

As a high-profile heiress of a business empire, it goes without saying that Kim has her fair share of naysayers. “People have said that I’m not a doctor, but I’m opening an aesthetic clinic,” she says, nonchalantly. “I’m sure people have also said: ‘Oh, Kim, she’s just using her father’s money (to do whatever she wants)’. I’m used to it. I mean, people have been talking about me for a while.”

But Kim is, honestly, too busy to care. The 29-year-old isn’t the seagull manager or the aloof founder her critics may expect her to be. She has her hands full in every aspect of her business, save for administering doctors-only procedures. “When we first started, we didn’t have enough staff, and I wanted to make sure I’m hiring the right people, so it took a while,” she elaborates.

If her doctors needed assistance, she stepped in. Before she found a cleaner, she scrubbed the toilets and made sure loo rolls were replenished. Anxious about Covid-19, she “bought a lot of Clorox” and wiped down the surfaces in the clinics. Every now and then, she’d be behind the receptionist’s desk, fielding phone calls and dealing with difficult customers. She also oversees marketing, accounts and expansion plans. “My father told me: ‘You need to learn how to do everything, so when anything happens to your staff, you’re not scared.’ This way, I’ve also earned the respect of my team.”

In the process of building her beauty empire, Kim discovered things about herself. She realised she’s good at communications, both internal and external. “You know, common sense isn’t common,” she quips. “I always tell my team to not make assumptions. Whether you’re giving or taking instructions, don’t assume the other person fully understands.” She also realised she can be very patient – with her staff and customers – although she thinks that’s not always helpful. “I’m too soft, too nice! I’ve been told that I need to be firmer and stop picking up after people.”

Talking to her, I get the distinct sense of altruism. “I want to give everyone a chance to grow with me and the company,” she says of her team. “If they share the same vision and are willing to go through the hardships that come with the business, I will help them and find ways to make things happen for them.”

This desire to help others also extends beyond the workplace. Kelhealth, the parent company of Papilla and Illumia, started its corporate social responsibility initiatives as soon as the group came to being. The Kelhealth Benefactors Platform has, to date, built homes for the underprivileged in Mongolia, supported a slew of local charities in their efforts to provide food and home essentials, and donated generously to Covid-19 frontliners in Singapore.

Kim credits her father for instilling the value of giving. in her. “I grew up doing charity work with my dad. Ever since I was five or six years old, he would get us involved in packing and giving out necessities to old folks, pet shelters and the disadvantaged. He’d always remind me that we’re very lucky to have what we have and we must help other people.”

You can almost hear a twinge of discomfort in her voice when being probed about her philanthropic work, as if highlighting them diminishes her sincerity. “I find it normal to do these things,” she adds. “It’s a part of my life and I want nothing for them.”

When the interview began earlier at 3pm after a long day of photo shoot, Kim apologised for eating her late lunch of a sandwich while she fielded the questions. It’s clear that her world is moving fast and she shows no signs of slowing down. “I’m working on revamping our skincare line,” she discloses of her upcoming plans. “There will be a new, more affordable range of products and treatments for the mass market. We’re also opening another Illumia outlet and are set on overseas expansion.”

Entrepreneurship is a journey, not a destination. How will Kim know she’s made it? On Kelhealth as a whole, she says: “I feel good about the company. We’re growing. I’m very proud of my team and myself.” But it’s clear that the most crucial measure of success, by her definition, is satisfying her family. “I’m really lucky to be able to do this with the support of my father. He’s been a big role model for me, and I’ve tremendous respect for him. So I tell myself that I must do my best for him and for my son.”