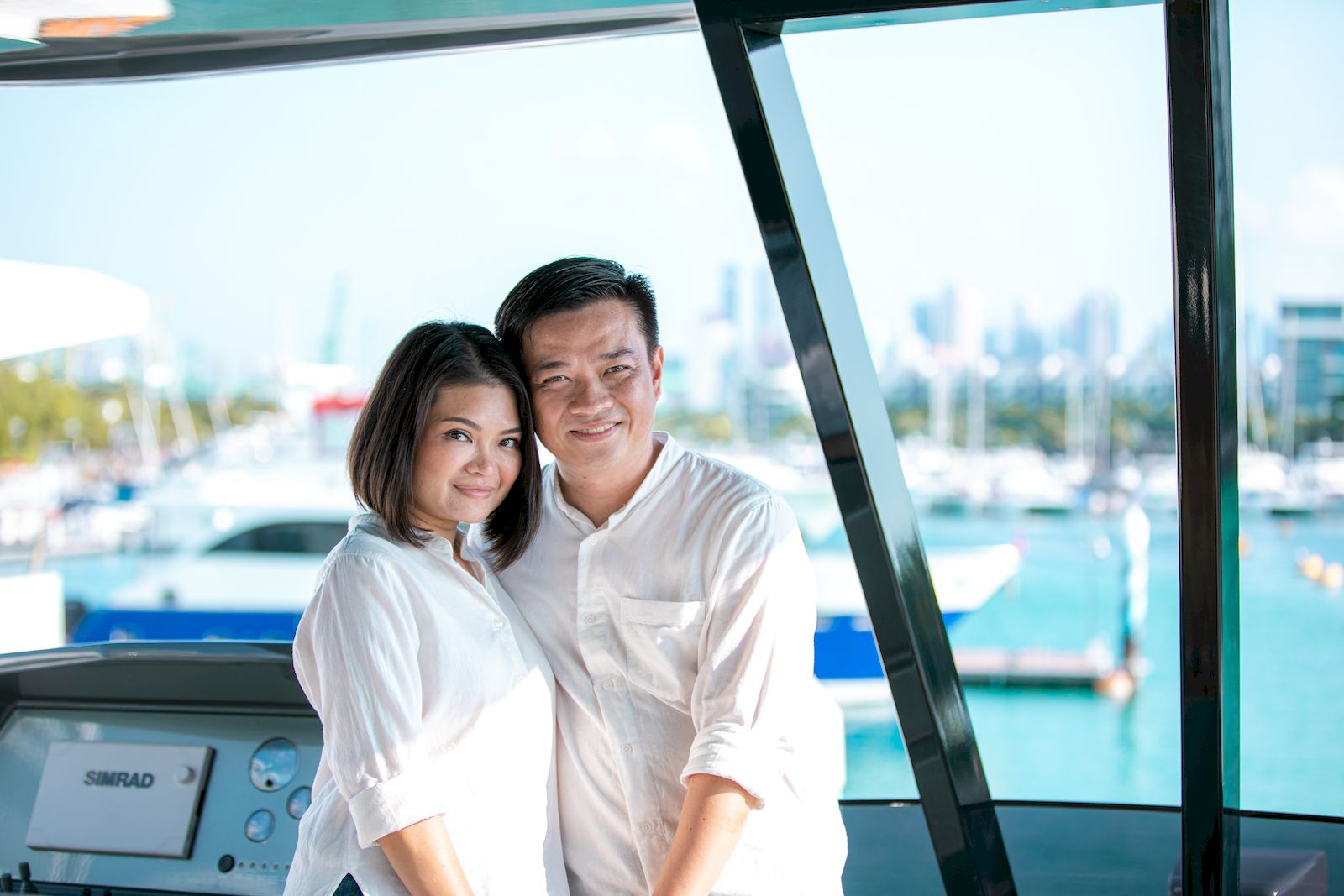 When Vincent Hee was just 15, his homemaker mother was diagnosed with cancer. Shortly after, his father was retrenched from his breadwinner job. To help his family of five pay for mum’s medical treatments and make ends meet, the young man took on odd jobs and tuition assignments after school. Despite the hardships, Vincent has fond memories of the generosity of his relatives, family friends, school teachers and even strangers, who had chipped in with money and rallied around him with emotional support.

Today, Vincent is a 43-year-old self-made multi-millionaire with a varied portfolio of businesses across Asia. Yet, he has never forgotten the kindness shown to him as a teen, and has made international news during Chinese New Year for his US$2m (S$2.7m) direct cash donation to a charity initiative that rescues Nigeria’s “witch children” and alleviates child mortality caused by pneumonia.

The donation was supposed to be in the form of the purchase of “The World’s Most Exclusive Dinner”, a lavish three-day experience put together by Director of World of Diamonds and philanthropist Karan Tilani, as well as a host of sponsoring partners. However, the last thing publicity-shy Vincent wants is fame, and even offered to forgo the dinner. Eventually, the Singaporean and his Malaysian wife Jane agreed to a hectic media blitz for one very simple reason: the children.

Climb to the top

When Vincent talks about the kids he’s helping, his face lights up immediately. “They are so cute!” he gushes, as he asks me if I’d seen the before-and-after photos of a beneficiary named Hope at an exhibit. “I love small children. That’s why I’m in the education business.”

It all started with the tuition gigs, which he juggled with school and part-time jobs at hotels. When he was studying for his Electrical & Electronics Engineering degree at Nanyang Technological University, he was already pulling 16-hour days to earn his keep.

By the time Vincent was 26 and had worked several years as a semiconductor engineer, he managed to save $50,000 – enough to do a Masters of Education at RMIT University and start his own tuition business. One success led to another, with the man founding the Charis Montessori Preschool group in Singapore, and its China counterpart in Shandong named Tong Le Yuan. He has eight schools in both markets, and plans to open more.

Apart from overseeing the operations of the schools, he keeps himself busy as an angel investor in various industries, including F&B, real estate and even entertainment. Currently, he is actively involved in mentorship and guidance for start-ups, and connecting them with investors. He is also financing a movie project in China, although he declined to reveal details.

While it goes without saying that Vincent’s work ethic and humility contributed much to his success, the entrepreneur who professes to be as regular as the next guy in the room says that he’s just been very fortunate to have made friends everywhere who offered him the right opportunities. “That’s how I got to know to Karan, and also how I met Jane. I was going on business trips to Kuala Lumpur when a mutual friend introduced me to her.”

The Hees are parents to three children, and have moved to Kuala Lumpur a year ago to be closer to Jane’s parents, who help to take care of the brood, aged 12, 10, and six months old.

The youngest child is a boy, who was conceived in 2018 just as Karan selected the couple as winners of “The World’s Most Exclusive Dinner”, from a total pool of eight international bidders who hail from Russia, China and the US. “Our participation didn’t just bring life to the Nigerian children but to us too. It was a lucky decision,” says Vincent.

The three-day experience, which took place in late January, kicked off in Sentosa with dinner at new rooftop concept 1-V:U and a night’s stay at The Outpost Hotel featuring 10,000 roses. It was followed by a daytime cruise in Singapore waters on a Ferretti 780 luxury yacht from Hong Seh Marine. Next came the highlight: an 18-course dinner by Kirk Westaway of Michelin-starred restaurant Jaan served with fine wines and champagnes, aboard a Bombardier Global 6000 from OJets cruising 40,000 feet above Southeast Asia.

In addition, two pairs of diamond-encrusted chopsticks were presented to the couple during the dinner, together with World of Diamonds’ Jane Seymour ring, a rose-gold plated platinum ring set with a rare 2.08-carat cushion-cut fancy vivid blue diamond. The Hees then spent the night at the newly restored Raffles Singapore’s Presidential Suite. Throughout the entire experience, the couple was chauffeured in a convertible Rolls-Royce, which even sent them right to the private jet on Seletar Airport’s tarmac.

While the couple enjoyed these luxuries, they hadn’t expected them. “A lot of the items on this itinerary were surprises. I’d initially asked Karan to cancel the dinner as it’s a lot of effort for him. We also didn’t want to be perceived as show-offs. However, he convinced me about the power of sharing the plight of the children and urging the community to come together to help,” adds Vincent.

Describing their lifestyle as simple and prudent, the Hees were not Karan’s customers, and were only introduced to the diamond dealer regarding this charity dinner, which is part of a long-term philanthropic project spearheaded by Karan. The latter aids DINNødhjælp, a Danish non-profit organisation founded in 2012 that operates a children’s centre in Nigeria called Land of Hope housing “witch-children” and the on-site Karan Tilani Hospital; and also funds local community efforts in the Akwa Ibom State to eradicate pneumonia, which is the leading cause of death for children under the age of five.

The US$2m in question will be used to purchase and administer 20,000 doses of pneumococcal vaccines, which cost US$85-90 ($117-$123) each. The excess will be spent on the cost of vaccination cold storage, as well as the training of doctors and nurses at the 40-bed hospital.

And to the Hees, it is money well-spent indeed. Says Vincent, “Karan had shown me a video detailing the horrors Nigerian children branded as witches were subjected to. Their parents would set their babies on fire, amputate their limbs, and starve and abandon them. As a parent and educator, this abuse is unimaginable to me. I want to give these kids hope just as how people in my youth extended to me a helping hand when I felt there was no hope.”

Jane chimes in, “Their suffering is heartbreaking. Saving 20,000 lives with US$2m is totally worth it. We must do whatever we can, because whatever we do is also for the next generation.”

A blessing to others

This project made him rethink the concept of charity, says Vincent. “Many times writing a cheque is the easiest thing. How many of us think beyond the mere act of giving to ensure that donations are spent sustainably and responsibly? We cannot save a child simply by providing food and medication; we must also think about his education and future, and how he can help others when he grows up. As an educator, that’s where I can contribute. It’s in the works.”

And this isn’t the couple’s only charitable initiative. In Singapore and Malaysia, the couple is active in food donations and organising events for aged homes and the disabled. Vincent has a surgeon friend in Indonesia who would approach him to sponsor treatments for the poor. When the haze hit hard last year, Jane also urged him to plant trees in Kuala Lumpur. To date, the Hees have grown 3,000 trees.

“Although I am always back in Singapore, I sold my car here and take the MRT instead to be planet-friendly. We must do whatever we can. Any type of charity is good. We subscribe to the Chinese proverb: ‘It is good fortune to give than to receive’. And by our own experience, you will receive so much more when you give,” he says.

“We didn’t want anything in return from this donation and yet have been shown so many amazing experiences. We took off from Singapore on the private jet and landed back here, which was the first time it ever was done. We’ve never seen 10,000 roses all at once before. And the Rolls-Royce pulling up on the tarmac – I had served with the Air Force during my National Service days, and I never thought that’s possible!”