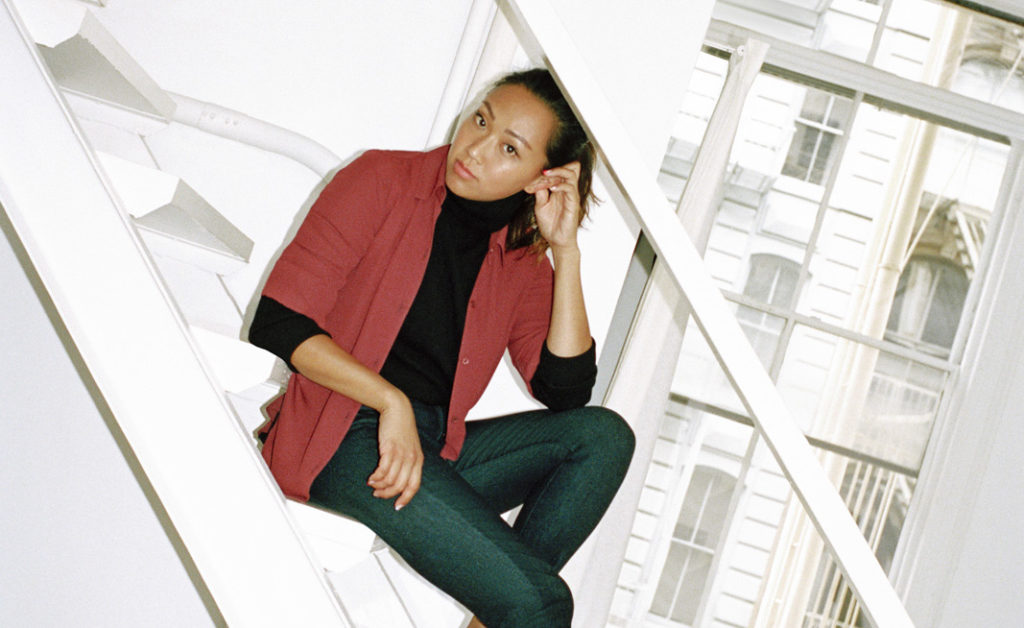 Fashion heiress and businesswoman Veronica Chou has long been immersed in the world of clothing.

When she was a teenager, her grandfather’s company was Hong Kong’s largest manufacturer of knitwear and denim, and by the time she reached adulthood the curious young woman would visit his factories – and subsequently those of her father, Silas Chou – when she’d ask countless questions: “Why’s this so dusty?” “What’s this smell?” and “Where’s this coloured water going?”

Her fascination with the industry led Chou first to an internship and eventually to a front-row seat fashion shows – by that time she was living in New York and helping her father with brands such as Tommy Hilfiger, which he’d acquired with business partner Lawrence Stroll (now owner of the Aston Martin car company and Formula 1 team) in 1989. In 2008, while still in her early twenties, she founded her own company, Iconix, bringing a raft of western fashion labels into second- and third-tier cities in mainland China to meet the demand from an increasingly affluent middle class. Most recently, has Chou launched her own sustainable fashion brand, Everybody and Everyone.

Travelling constantly within China while working with Iconix, Chou couldn’t help noticing the air pollution. “The moment I walked out of the plane, I remember seeing these particles in the air and thinking to myself, ‘What am I walking into?’” she says. “This was before the 2008 Beijing Olympics, so the air was really terrible.” Even now, she thinks it’s still a major issue.

“I came back to Hong Kong last September, and because China was still in lockdown due to coronavirus and wasn’t really open yet, the air was much better here. Now, it’s been five months since I’ve been back to Hong Kong and you can already see that the air is much worse. It was really during that time in China when I was experiencing the air pollution that I started asking all these questions about the environment, just as I did when interning at my grandfather’s factories ignited my curiosity in sustainability.

“And on another more personal note,” she adds, “growing up in the fashion industry at a time when models were often one size only, I was always presented with one type of image – the sort of ‘ideal’ woman.” At the time she’d left Hong Kong to study in America, Chou says she already had body-image issues and was struggling with eating. “I tried so many weird and crazy diets, but from there I got into what healthy eating really is, which includes a lot of organic foods. And from organic foods I got into what sustainability is in a general sense, and I began to delve into what sustainability is in fashion.

“I’ve been involved with sustainability for seven or eight years now – way before it became an area of focus within this industry, and I’m quite lucky because my brothers invest in technology. A couple of years back, I told them how I wanted to do more and they pointed me down the road of material science, which changed the way I looked at fashion.”

Chou and her brothers have invested in a company called Modern Metal, which grows leather in a lab. “There are a lot of these material-science technologies out there,” she says, pointing to a new leather bag from the Karl Lagerfeld label that doesn’t involve the killing of an animal. “The leggings I’m wearing right now, for example, are made from fermented sugar from Africa,” says Chou, whose eyes light up when she starts talking about the range of fabrics used by Everybody and Everyone, “and there are others that are made from eucalyptus fibre.” Currently her brand is available only in the US, as Covid-19 has restricted international shipments. “My clothes are mainly made in China, with some in Portugal and a small number in the US,” she says, “but I’m trying to move as much production as possible to the US, because it’s my main market. We launched in 2019, so my brand is still pretty new and the US market is big enough for me to explore at the moment.”

Chou is especially proud of the fact that her brand is size-inclusive as well as sustainable, offering a wide range of fits for just about everyone. “A lot of our clothes also have a multi-functionality to them. For example, our best-seller is a pair of trousers that adjust at the waist, so you can either cinch them for a more streamlined look or let the, out for something more casual and comfortable. We also have another pair that’s adjustable at the hem, so you can have three different trouser lengths for when you wear high heels or flats.”

Her design ethos for a single item of clothing to have multiple uses is reflected in her brand’s puffer jacket, which is made from 330 recycled plastic bottles and whose lower half can be unzipped so it can be worn shorter. “It’s a really smart design,” says Chou, “because you can wear it in the autumn as well as the winter, when it’s snowing in New York. And then you also have our turtleneck, which of course is made from sustainably sourced cashmere and wool. That can be transformed by pulling the neck part off, so when you’re hot you can take it off or layer it over a shirt to style it completely differently.”

Chou’s passion for sustainability didn’t initially meet with enthusiasm. “Four or five years ago,” she says, “I’d talk to some people about sustainability, and they’d literally turn around and run away from me. People in our industry – especially big-name designers and other famous brands – didn’t care about sustainability, but now everyone cares and everyone’s trying to make a change. Even a couple years ago, people were like, ‘What are you talking about? This is how we’ve been doing things for a long time.’ They’d tell me how it would be more expensive – and some people simply just ignored me. So, I thought, ‘OK, if you guys aren’t going to change then I’m going to make my own brand.’”

The thought and research that’s gone into the production process is evident. “It’s not just about the fabrics and materials we use but we also try to consider where the raw materials come from, to consider the source,” says Chou. “One of my own favourite products is the silk shirt, because the silk is grown in China by regenerative agricultural methods, meaning that instead of growing one type of crop year-round, various types of crops are grown throughout the year in order to protect and facilitate soil health.”

Above all, Chou expresses her desire for the fashion industry to collaborate more and find solutions collectively. “For example, if I as a new brand went to look for zippers and asked if the zipper company had more choices of sustainable zippers, they might not have them. But if 10 brands collectively asked for them, then they’d feel more obliged to make them,” she says. “Collaborative power is necessary for change in order for our industry to be less wasteful.

“A large element of the waste also comes from creating a lot of clothes that consumers don’t necessarily need or buy. One of the companies I’m an advisor to is called Perfectly, and what it does is to invite consumers to take a picture of themselves. That avatar is then used to get more accurate measurements, which reduces the number of returns when a customer orders a garment that doesn’t end up being the right fit.”

As for her personal style, Chou highly values practicality, which is also reflected in her brand’s clothing. “One thing my brand has is pockets in a lot of things,” she says. “My denim, for example, pretty much has the biggest pockets on the market and basically anything we make – from pants to dresses or athletic wear – contains pockets.” In terms of style, however, she favours clothing with a hint of cool, but not too over-the-top – something polished and elevated.

“Our athletic wear uses a breakthrough technology that allows the nylon to degrade in three years instead of the usual hundred or so years that normal nylon takes to degrade,” says Chou. Now wholly committed to sustainability, this fashion- industry eco-warrior says she’s just invested in the “world’s first circular sneakers – when you’re done with the original pair, you can send them back and they’re broken it down for recycling it into new ones. I’ve also invested in non-fashion-related clean technology, like a carbon-capture process that breaks down plastic. “My family does a lot of investment for me,” says Chou, “but if it doesn’t push the sustainability agenda forward then I choose not to invest.”

2021: fashion will be inclusive or it will go extinct