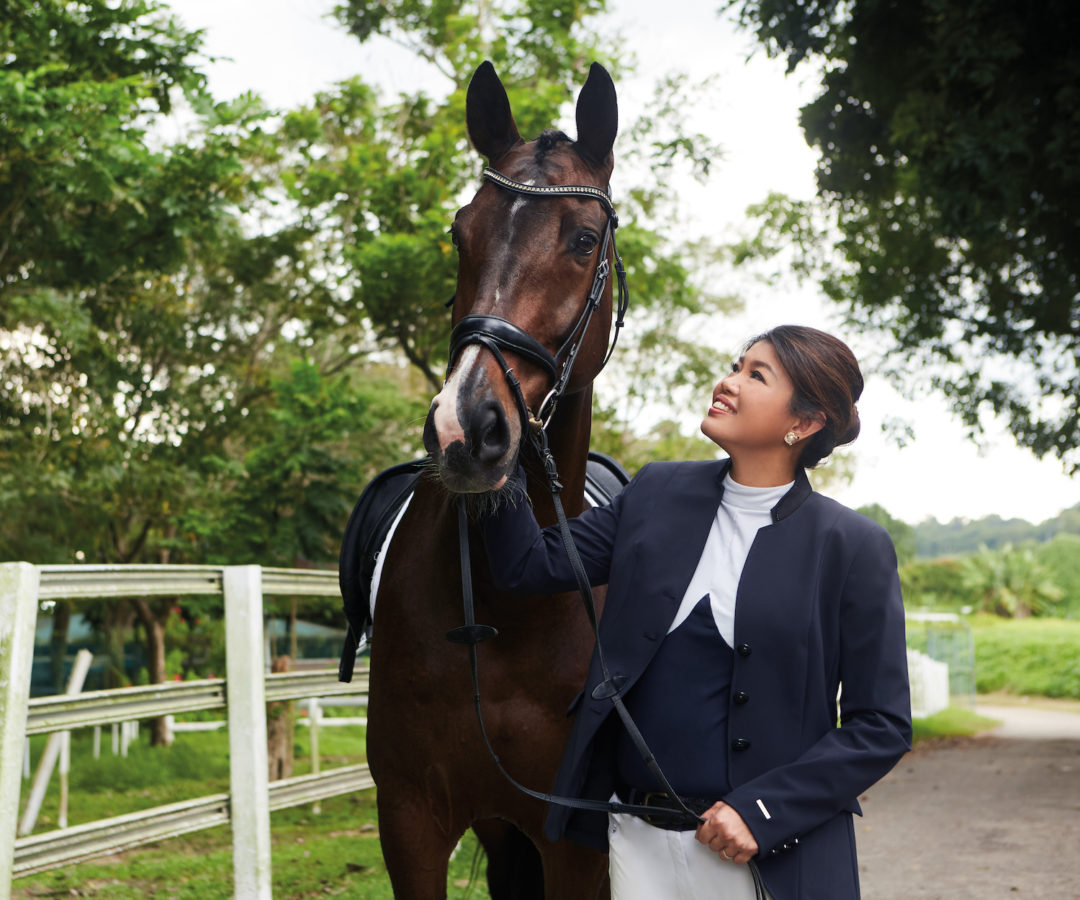 Women of Action: Diana The-Kronenburg, special counsel at Eng and Co, on her love for horse riding

People & Events
Women of Action: Diana The-Kronenburg, special counsel at Eng and Co, on her love for horse riding
Share
Next article

Tall with a commanding presence, Diana The-Kronenburg cuts a powerful figure in a strong-shouldered equestrian jacket with a nipped-in waist. Suited and booted in her competition riding gear, she looks the part of a seasoned horse rider with numerous competitions under her belt.

The special counsel with Eng and Co, an independent law firm within global professional services network PwC, has amassed over 20 years in legal and financial services. The last 14 of those were spent as chief counsel for the Asia-Pacific region leading legal teams in reputable financial institutions. In equestrianism, Diana is also a trusted voice. She is the assistant honorary secretary of the Equestrian Federation of Singapore (EFS) and the president of the Riders Club.

Despite her authoritative presence, Diana describes herself as a loving mother and wife. I have a treasured glimpse of her softer side as we photograph her. She breaks into smiles and laughter as she offers her horse Watson pats, while he nuzzles her in return. It’s clear she’s a natural with equine beings.

Unlike her peers, Diana was not born in the saddle. She only began riding later in life and took her first lessons at 38 years old. Her motivation was her then six-year-old daughter who unexpectedly requested horse riding lessons. Now 17, her daughter no longer rides with her, but the beginning years of their shared experience were crucial to her riding career.

Their first family horse was Morena, an ex-polo pony who had to retire from the sport after developing tendon injuries in her forelegs. “After having started riding for only four years then, I became her proud owner. She quickly became the family horse, and it became a daily ritual for me and a weekend ritual for my daughter, to take turns riding, grooming, grazing and hand-walking her.”

The duo eventually turned their hobby into a competitive sport and regularly took part in inter-club shows. When her daughter’s interest gave way to study pressures, Diana continued with horse riding and competed with Morena in her first National Dressage Championships in May 2016.

A force on the field

Diana competes in both dressage and endurance riding, and has taken part in many inter-club shows. Her two sports competition horses in dressage, Winterdream and Watson, are stationed at Singapore Turf Club Riding Centre (STCRC), which is the location of our photo shoot. Her last competition took place in 2019 before the pandemic and saw her winning the EFS Equestrian League in Dressage in the Medium level for 2019-2020 with Winterdream.

Between 2015 and 2017, she had competed in showjumping. “I was not jumping very high but the risk of injuries was a lot higher as I had picked up riding not too long ago, and I was no ‘spring chicken’.” She made a decision to stop jumping in 2017 after being selected to represent Singapore in the Southeast Asian (SEA) Games in the equestrian discipline of endurance riding. “I told myself that I would be a fool to miss out on representing my country, just because I had injured myself chasing adrenaline in a jumping lesson and trying to reach new heights.”

It was a worthy undertaking. The SEA Games that year is one of the highlights of her equestrian journey. “I was one of six riders who was chosen to represent Singapore for the first time to compete in a one-star event. We rode 80km on the same horse, across different terrain in Kuala Terengganu such as palm oil plantations, alongside the beach and roads. We also cut across a cemetery.”

Diana went on to compete in countries like Thailand and Australia for endurance riding. “Khao Yai National Park was where I completed my first 80km endurance ride. I also competed in Victoria’s Grampians, where you get to ride in challenging hilly terrain, as compared to the relatively flat land in Terengganu. I competed in Australia three times and enjoyed the experience so much, I bought two Arab horses.” While her intention was to compete more regularly in Australia and represent Singapore again, Covid-19 has derailed those plans for now.

Diana feels a calling to make horse riding more accessible for all by shifting perceptions of it as being a rich man’s sport. When she was in secondary school, she would take the public bus back home and pass the Singapore Polo Club. “I used to sit on the upper deck of the double- decker bus so I could catch a glimpse of someone riding a horse across the polo field.” Singapore Polo Club was, and still is, a private member’s club – its membership was a privilege that Diana’s parents could not afford, let alone the horse riding lessons.

By the time Diana began horse riding, she had made a name for herself as a well-established lawyer and could buy a membership at the club. Now, she wants to highlight more options in Singapore where one can pick up riding lessons without being a member of a private riding club. Organisations such as STCRC offer recreational riding opportunities and lessons to the general public.

Diana also wants to dismantle the idea of age as a barrier to horse riding. “The best thing about horse riding is that it is age agnostic,” she says. To her friends who dream of saddling up, but say they are too busy, too old or are afraid of falling off the horse, Diana simply offers her later start as an example.

“In my roles within the equestrian community, I hope I can make anyone’s dream to learn to ride a horse come true. If you have ever dreamt of picking up horse riding, I would advise you to just get on with it and try it. Life is too short to make up excuses not to try something new.”

Women of Action: Dr Patricia Yuen on her love for skiing