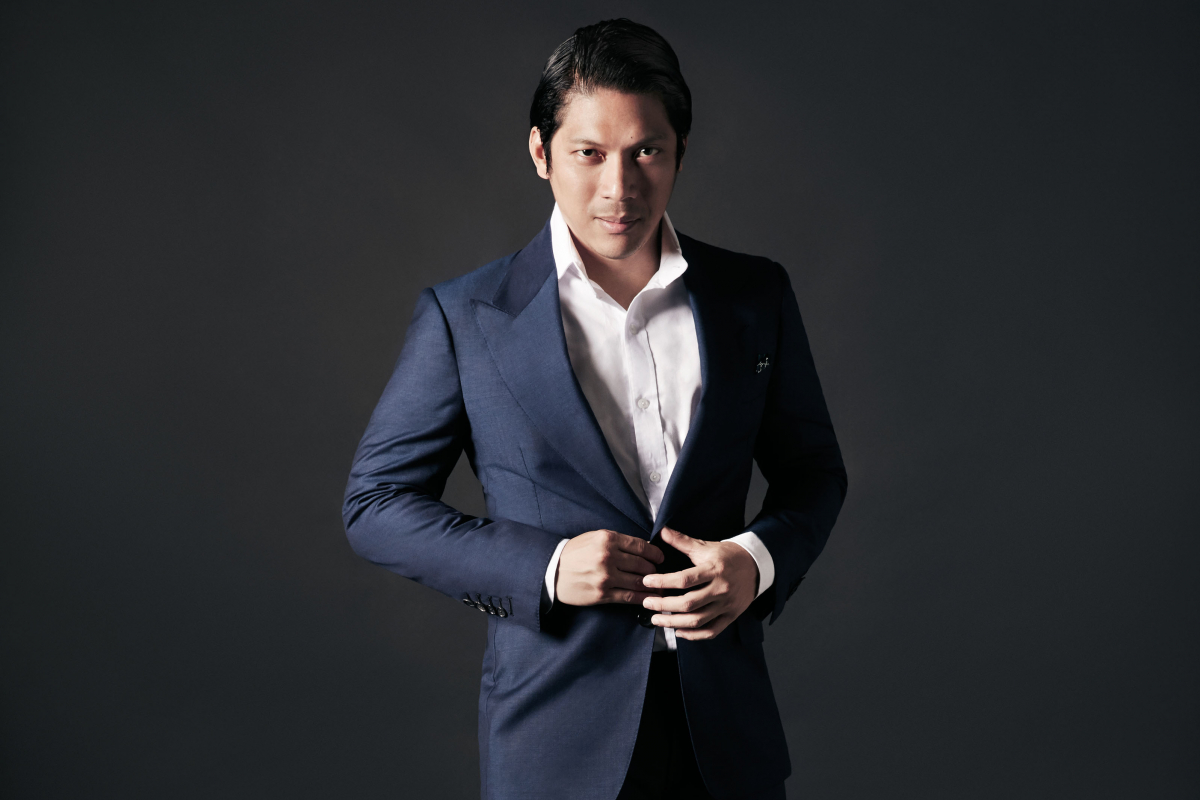 “Did you see a difference? Sometimes you have to trust the subject.”

Robbie Antonio knows exactly what he is after. He wants his photos moody and dramatically lit. He insists on styling his own hair with a particular brand of pomade. He prefers his jackets to fit close to his frame instead of draping from his shoulders. It is his instinctual approach even to the minutiae that has led to successful projects such as Century Spire with interiors by Armani/Casa and The Milano Residences by Versace, both in the Philippines.

That same laser focus extends to the start-up he founded in 2015, Revolution Precrafted. Officially evolving into the Philippines’ first unicorn — industry-speak for a tech company valued at US$1 billion or more — from what one can only assume was a prize stallion, the online platform cleared the nine-zero hurdle last October, after raising Series B funding through the Singaporean VC firm K2 Global. Revolution Precrafted bagged US$7.6 billion in consolidated project revenue from 20 countries. It’s behind homes and structures in North and South America, Europe, Asia, the Middle East and Africa. And in March it signed a US$3.2-billion deal to design and construct villas and apartments on The World islands in Dubai. All this earned the 41-year-old the 2018 Philippines Real Estate Personality of the Year award. Robbie Antonio had made up his mind to gun for a major first and become the world’s largest supplier of designer homes — and he’s well on his way.

The start-up, Robbie Antonio explains, is a confluence of his obsessions and strengths. He’s passionate about art, design and architecture; he’s into technology; and he’s in the real estate business as is his father, Century Properties’ founder and chairman Jose EB Antonio. (At time of writing, Antonio, the third of four sons, and his father ranked 28th on the Forbes list of the Philippines’
50 Richest.)

Effecting change on the largest scale possible is a mantra of Antonio’s; he studied similarities among start-ups the likes of Airbnb to crack their code to success. “I wanted to understand the consistencies among these firms: They’re asset-light with low capital expenditure, they involve technology, they’re global and disruptive,” he explains. “I just kept saying those words, and I thought, how do I practise those in an area I know?”

The answer was Revolution Precrafted, an online company that retails across the globe prefabricated modular homes and structures designed by some 80 titans in the industry — Zaha Hadid, Ron Arad, Jean Nouvel, Tom Dixon, Marcel Wanders, Sou Fujimoto, Kengo Kuma, the Campana brothers, and more. The company’s regional fabrication plants or local contractors would set up the buildings once the shipment arrives. One of Antonio’s inspirations was the French metalworker, designer and architect Jean Prouvé, who is best known for his work on prefabricated portable structures in the 1930s and 1940s, when the capabilities for mass production took off, as did the demand for affordable housing that could be built quickly and transported easily.

As managing director of Century Properties, Robbie Antonio cemented the 32-year-old company’s status as the go-to developer for high-profile branded collaborations, such as the Acqua Livingstone dressed by Missoni Home, the Azure Urban Resort Residences by Paris Hilton, and the Trump Tower Manila. “It’s good for people to know I’m not a one-trick pony,” Antonio says of his accomplishments since expanding beyond traditional real estate. “I thought to myself, I can do what I do in traditional real estate and never get to the point where I want to be.”

SEE ALSO: What do Barack Obama and Donald Trump have in common?

A disruptive vision was what he was after in establishing a prop-tech start-up. “I’ve done these amazing branded towers, but I can only build them one at a time, and it’s going to be super-expensive to do this across the world,” he says.

“Let me be agnostic and supply to theoretically every developer and landowner in the world — so how do I transport this concept?”

To bolster Revolution Precrafted, Antonio’s to-woo list of collaborators included established names: Past or potential Pritzker Architecture Prize winners, or creatives at the forefront of design, regardless of their age. But not everyone signed on to his concept. “These are people who design and build mansions for tens of millions,” he says. “And here I am asking them to do something the complete opposite — the price tag (from tens to hundreds of thousands), the size, the fact that it’s mass-produced.” (The legendary Frank Gehry is one famous holdout. “I’ve stopped, actually,” Antonio says of his efforts to talk the octogenarian round. “I’m the most persistent guy, but at some point…”)

Another venture keeping Robbie Antonio occupied is the US$1.1-billion Batulao Artscapes, situated in the outskirts of Manila. There he plans to construct four themed art museums designed by Pritzker winners, along with some 8,000 holiday or retirement homes. The concept was inspired by Naoshima in southern Japan, where the entire island is teeming with museums and installations, and buildings designed by Tadao Ando and Kazuhiro Ishii. And even as Revolution Precrafted is taking flight and Batulao Artscapes is under development, Antonio has his mind on possible endeavours outside the realm of real estate — fin-tech, med-tech and technology-based concepts that could be rolled out regionally.

Robbie Antonio has been associated with stars since developing the 19-storey IM Pei-designed Centurion condominium in Manhattan, his first real estate project following his graduation from Stanford University with an MBA. (He earned his bachelor’s degree in economics from Northwestern University.) Through five years of establishing himself in New York City’s real estate business, he became acquainted with the Trump family, and now calls Eric “one of my closest friends”.

Despite his high-profile connections — a web search brings up numerous photos of him with the likes of Giorgio Armani, Philippe Starck, Paris Hilton and Lenny Kravitz — Antonio doesn’t consider himself a public figure. An intensely private person, he named his Rem Koolhaas-designed house Stealth, which precious few have been invited to. In fact, part of the reason for launching Revolution Precrafted was the continual requests he received for a look at a residence by the Pritzker winner. “I said, You know what? I’ll do something better, I’ll do something for you, and at a very affordable price,” Antonio recounts.

SEE ALSO: 6 fashion museums to visit on your summer holiday

The 30,000-sq-ft Stealth holds another fascination: Obsession, his collection of portraits of himself commissioned from some of the biggest names in post-modern and contemporary art, from Takashi Murakami to David Salle. Obsession caused a stir, whether due to the renown of the artists or the perceived grandiosity of it all; Vanity Fair titled its 2013 story on Stealth and Obsession, “The Museum of Me,” an epithet Antonio bristles at. “It was a little project I did for a period that was talked about and sort of blown up, and people are still talking about it after five, six years,” he says with a resigned sigh. “It’s an extremely infinitesimal portion of my collection — you have to think of something different, you’re asking me the same question everyone else is; it’s so passé.”

Art has been a huge fixture in his life since his New York days, when he lived surrounded by the Met, MoMA, Whitney and Guggenheim; art auctions; and top collectors. And the emotional, imaginative quality of art provides a welcome reprieve from the analytical demands of his work. “I go through my day and my executive committee meetings are all about numbers — revenue, profit — then I head to an extremely different meeting where it’s about the creative process, and that’s what interests me, that balance in life,” he says. “The juxtaposition of the two and getting an amalgam of both — I love to be [in a position where I understand both worlds].”

When it comes to art, Antonio’s first love is abstract expressionism and pop art. He lists Mark Rothko, Jackson Pollock, Willem de Kooning and Andy Warhol as among his favourites. (His first purchase was Warhol’s Camouflage, he told Artnet.com last December.) But he recently found himself going back in time as a collector and exploring the work of Old Masters, such as Titian, Rubens, El Greco and Caravaggio. “All those names interest me more now, because it’s the opposite of what I’ve been doing,” Robbie Antonio explains. “I don’t like the bandwagon — if everyone’s doing it, it interests me less.”

In everything he does, being distinct from the crowd is of paramount importance. Mediocrity is a big turn-off, he proclaims, and it is clear Robbie Antonio prefers to aim for the apex rather than scale a peak: He has big dreams for Revolution Precrafted, that it will one day grow to become a US$10- to 20-billion-dollar company. And to get there, he is exploring the idea of venturing into socialised housing and disaster relief to build homes for millions. “It’s a business — don’t get me wrong,” he explains. “But while everyone’s not looking at it, I said, let me use what I know best, which is housing, to enact change.”

“I’ve already done the luxury projects and people know me for that, but I’m going to do something inherently very different,” he goes on. “If I can do something extremely benevolent in society in an ignored niche, why not?”

All this sounds completely natural coming from a man who is drawn to dark settings and paints his office and home interiors black — mainly because white seems to be overwhelmingly preferred elsewhere. “That’s how my brain thinks: When everyone goes left, I like to go right,” he quips.

Horses may canter in herds, but a unicorn gallops alone.