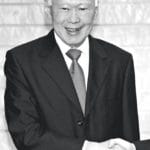 It is not inaccurate to say that Lee Kuan Yew is Singapore; and Singapore is Lee.

In more than half a century of service to the country, our first prime minister transformed what was once the boondocks of Southeast Asia — a tiny island with no natural resources to speak of — into an economic dynamo with a prosperous five million population. Along the way he also mended a fragmented public order dominated by racial tension, transitioning the city-state into the peaceful, multicultural society it is today.

As observed by Nicholas Kristof in a review of Lee’s 2000 memoir From Third World to First: The Singapore Story: “[Other] leaders have reshaped nations — Kemal Ataturk in Turkey, Lenin in Russia, Deng Xiaoping in China — but no one left a deeper imprint on his people than Lee.”

Born Harry Lee Kuan Yew in Singapore on September 16, 1923, the eldest son of a Shell employee and a housewife grew up in a house on Kampong Java road. He attended Telok Kurau Primary School, followed by Raffles Institution, where he excelled in cricket, tennis and chess, and was awarded a John Anderson scholarship to attend Raffles College (the precursor of today’s National University of Singapore).

After the Japanese Occupation (1942-1945), Lee left for England to read Law at the University of Cambridge, graduating with a double First Class Honours. Although admitted to the English bar in 1950, Lee returned to Singapore where he started out as a litigation lawyer at Laycock & Ong. The following year, he had his first taste of politics, when he acted as election agent to John Laycock in the 1951 legislative council elections.

Together with Lim Chin Siong and Fong Swee Suan, Lee would go on to found the Peoples’ Action Party (PAP) in November 1954. Five years later, in June 1959, he became Singapore’s first prime minister, a role he held for 30 years.
Lee’s abilities were tested from the start. Alarmed that Singapore would be cut off from the abundance of Malayan rubber and tin, which made up the majority of exports then, he led the nation’s merger with its neighbour in 1963. But due to numerous policy differences, Singapore was forced to separate from Malaya barely two years later. In a televised press conference at the time, he said: “Singapore shall be forever a sovereign democratic and independent nation, founded upon the principles of liberty and justice, and ever seeking the welfare and happiness of the people in a most and just equal society.”

The failed union also fortified Lee’s determination to reduce Singapore’s reliance on its neighbours by extending its reach to the wider world for trade and investment opportunities. But to do that, the country had to be built up from within.

Lee and his administration installed English as the language of business and government (while institutionalising a bilingualism policy in schools), placed emphasis on education, implemented an island-wide public-housing programme (through the establishment of the Housing Development Board) and beefed up national defence by introducing military conscription.

By the time he stepped down as prime minister in 1990, Singapore had one of the world’s most bustling ports, and had become a manufacturing and logistics hub. Today, it has one of the world’s most open economies with a GDP of US$297.9 billion (2013) and is a leading centre for the biomedical, financial, banking and legal services sectors.

Such was his vision and foresight that Henry Kissinger, the 1973 Nobel Peace Prize winner and Lee’s close friend, once remarked: “I’ve not learned as much as anybody as I have from Mr Lee Kuan Yew…[he’s] one of the asymmetries of history.”

Not surprisingly, the list of awards bestowed on Lee is extensive and includes the Freedom of the City of London (1982), Woodrow Wilson Award for Public Service (2006) and the Lincoln Medal (2011) among others. But Lee did not dwell on these accomplishments. In his book Hard Truths To Keep Singapore Going (2011), he advised those entering politics to have “convictions” and not to focus on “going in for personal glory, or honour, or publicity, or popularity.”

But as with all powerful leaders, Lee’s time in government was not without controversy, which on occasion was exacerbated by his combative style of politics and sharp tongue.

Infamously candid, he was once quoted as saying: “If you are a troublemaker…it’s our job to politically destroy you. Everybody knows that in my bag I have a hatchet and a very sharp one. You take me on, I take my hatchet [and] we meet in the cul-de-sac.”

Unyielding policies such as the Internal Security Act (which allowed for preventive detention), the death penalty and capital punishment, restrictions on public protests and the freedom of speech have also not gone without fierce criticism from locals and international human rights organisations.

Lee took it all in his stride, justifying his actions by the invariable need to do so: “What are our priorities? First, the welfare [and] the survival of the people. Then democratic norms and processes, which, from time to time, we have to suspend.”

But while politics was his battleground, kinship was his haven. For 63 years, he was married to lawyer Kwa Geok Choo and had remained devoted to her until her death in 2010. That year, the hardened political warrior shed his armour, telling The New York Times: “I try to busy myself…but from time to time, in idle moments, my mind goes back to the happy days we were up and about together.”

While the man has gone, his enormous legacy remains. In the words of Terry Pratchett in Going Postal (2004): “Do you not know that a man is not dead while his name is still spoken?”