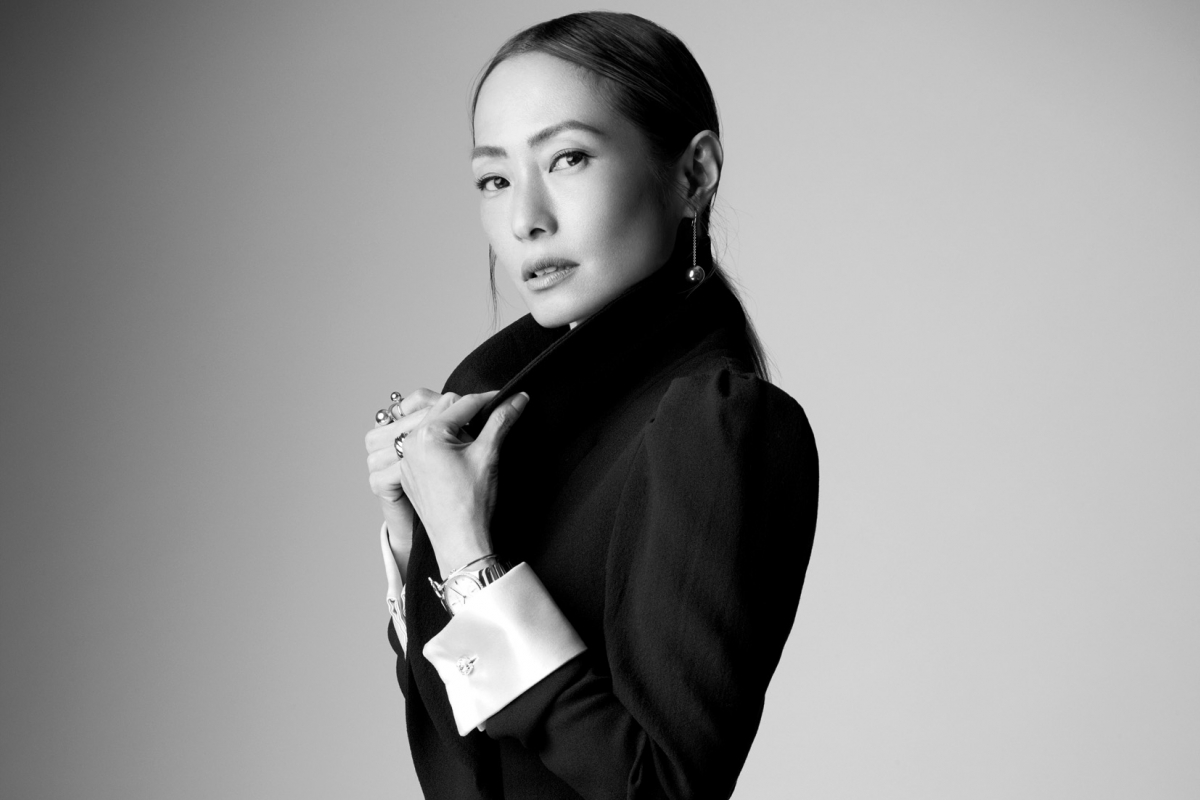 Tan Min-Li is a high-powered woman with many passions

Mention Tan Min-li and “fashionista” is the first word that comes to mind. She has been featured numerous times in the media, sharing style tips and offering sneak peeks into her wardrobe, with its dazzling array of designer gowns, handbags and timepieces.

“It’s always about fashion,” she acknowledges, as we sit down one morning at the ATLAS bar in Parkview Square. Despite the early hour, she lives up to her reputation and is the picture of chic with a lime green Kelly bag, sleeveless Roland Mouret black jumpsuit trimmed with lace at the shoulders, and a deLaCour watch.

Of course, there is nothing wrong with being such an ardent fan of fashion — she even has a capsule collection with Mad About Hue, but more on that later. What might surprise many is that Tan is a lawyer by profession, and a high-powered one for that matter.

Tan Min-Li and the Law

By day, she is a partner at a law firm (which she prefers not to name), in charge of corporate finance. She’s snagged a recommendation as leading lawyer for Capital Markets in IFLR1000 2017, and singled out as an AsiaLaw Profiles Leading Lawyer in Corporate M&A and Capital Markets for eight consecutive years. She also sits on the boards of various listed companies.

Unless you are from the legal circle, these facts about Tan are little known. And she prefers it so: “I’ve always felt that my work was a given. There is nothing remarkable about what I’m doing. I’ve done what thousands of lawyers have done.”

Her humility is refreshing and admirable, though you cannot help but wonder if she is selling herself short. After all, she’s been a lawyer for 15 years and structured deals that number in the “hundreds”.

In particular, she has helped companies go public, something which always fires her up. “It is a rare chance to get into the minds of really successful people and understand what they think and what has made them today,” she says.

“I am helping them raise funds that will make a difference to the trajectory of growth that they will experience. That’s what drives me, because it brings them to a whole new level.”

A lot of her work is cross-border too, primarily in Europe and across Asia. She finds it inspiring because she gets to learn about how different cultures work. For instance, when she first started in corporate finance, she often travelled to China as her firm was one of the earliest entrants.

Often, she sat in an office in a province, confronted with the “uphill” task of gaining the respect of her clients, who were from a male-dominated environment. “There were situations where as the team lead, I’d speak to a client and when he answered, he looked at my male colleagues. It was only a year down the road that he realised I knew what I was talking about. It was tough. But I made sure I always knew my work and the day that I got their respect, I felt that I had accomplished something.”

Tan gets a high from the deal-structuring aspect of her work. This year, she moved from managing partner to partner at the firm, so she can focus on that responsibility and return to working directly with her clients.

“Nothing inspires me or turns me on more than getting a new deal. I’m motivated by being able to create a win-win result out of a challenging situation. I want to make a difference to someone or an organisation. That, to me, is a true barometer of success.”

Clearly, she is passionate about her career. She’s never left it since joining the industry fresh out of law school — despite the notoriously high attrition rates. But having experienced its rigour, she can understand why people leave.

The early days were challenging, with 18- to 20-hour days being the norm. “There were times I worked through the night till 7am, went home to shower and change, then came back to the office,” she recalls.

Sometimes, she hopped on the plane to, say, the Philippines, landed at midnight and got down to work at 2am. The next day, she’d fly back to Singapore and go straight to the office. When it comes to closing a deal, it is necessary to catch that elusive window of opportunity, she says.

“I earned my stripes. I don’t talk about it a lot because to me, it’s the path that I chose. I don’t feel it was very interesting. I worked very hard to get to where I am so that I have the freedom to explore other things now.”

One of those “other things” is the movies. Since 2014, Tan has been a director and shareholder of Xeitgeist Entertainment Group. The Singapore-based film production company was founded in 2011 by Joe Thomas and Mark Montgomery.

“I’ve always had an interest in film and entertainment,” reveals Tan. When she was asked by Montgomery to come on-board, she said yes, joking it finally gave her the chance to meet Tom Cruise (she still hasn’t). More importantly, the opportunity would allow her to view the industry from a different perspective. “To be able to learn something new is very inspiring and enjoyable. It’s been an amazing journey,” she says.

The first film produced by Xeitgeist was The Man Who Knew Infinity, a biopic of the late Indian math genius Srinivasa Ramanujan, played by Slumdog Millionaire’s Dev Patel. In the pipeline is Hotel Mumbai, which premieres in 2018 and chronicles the 2008 terrorist attacks on the Indian city from the viewpoint of the victims and survivors.

For Tan, dabbling in movie-making has been eye-opening to say the least. “I learnt how film financing works; I work with entertainment professionals out of Los Angeles; I get to talk to the talents. I’m involved as much as my day job allows me to.”

She has attended film festivals in Cannes, Goa, Berlin and Toronto, and walked the red carpet on occasion. But the truth is, the glamour takes up only one percent of her time; the rest is spent behind closed doors attending meetings, understanding the industry, making connections and getting to know the major players.

Sometimes, she meets celebrities — such as Patel, about whom she cannot stop singing praises. “He’s so smart, humble, clued-up and savvy. He’s such a sweet soul and a lovely person. When he walks into a room and talks to everyone, he makes them feel like they are the only one in the room. He’s so personable and talented that you just want him to do well.”

Does she think Asian actors can make it big in Hollywood? Yes, she is adamant. “Now, more than ever, they will be able to. The world is so much smaller now. There is a great thirst for news and information. As Asia rises in prominence, there is a bigger curiosity than ever about it. I think this bodes well for Asian talents, and there are so many of them.”

Having worked the industry for the last three years, Tan says the most surprising thing she’s learnt is that, unlike law, “anything goes”. “I can’t even begin to explain it. It’s full of surprises. This is Hollywood. Everything you read about it is true…The norms we are accustomed to are completely out the window.”

And with more time to call her own these days, Tan has been able to indulge her love for fashion. In 2014, she collaborated with local accessories label Mad About Hue to launch a capsule collection of It Girl-worthy essentials such as high-waisted shorts and LBDs.

“As with film, I wanted to look at fashion from a perspective different than that of a consumer. I discovered a lot about the creative process that goes into designing a collection; about fabric and how it can be manipulated, and about designing around manufacturing constraints, pricing, merchandising…the list goes on.”

“But my most important takeaway is that it is crucial to have like-minded partners who share the same business ideals and objectives, so that when things go awry, which they inevitably will, problems are resolved in a constructive manner.”

In Tan Min-Li’s world of fashion

Meanwhile, she describes her personal style as “effortlessly put together but always with an interesting detail”.

“I am an adventurous dresser, and love experimenting with emerging trends and labels. To me, fashion is a way of expressing my individuality and sends a subtle message to the world about who I am, without my saying a word.”

Is she concerned about the frivolous image of fashion among some people? Her comeback is as elegant as her demeanour: “People should not confuse having a sense of style and pride in your appearance with vanity and excess.”

Tan has lost track of the number of times others say she does not look like a lawyer because of her fashionable dress sense and long, dyed tresses. But she takes it as a compliment. “I surprise them when they see what I can do. They don’t see me coming. It’s great, I love it,” she shares.

The changing times we live in means a woman should neither hide nor be ashamed of the different facets and sides to her character. Our society, she feels, needs to become more open-minded in order for it to overcome biases like this.

“There’s nothing wrong with being a lawyer and dressing up; the stereotype of what a lawyer should look like should go out the window. Women owe it to ourselves to explore different facets of our personality and stop repressing them. This is what I feel strongly about.”

Tan says it was during her early 30s when she developed the courage to step out with this mindset (in her Gucci heels, no less). With confidence, professionalism and career success as her greatest assets, the lady has never looked back since.

“Loving fashion and being adventurous with clothes don’t make me any less of a lawyer. Who says lawyers have to look a certain way? Does it mean I’m not serious about my job just because I put on make-up? Now that’s ridiculous.”