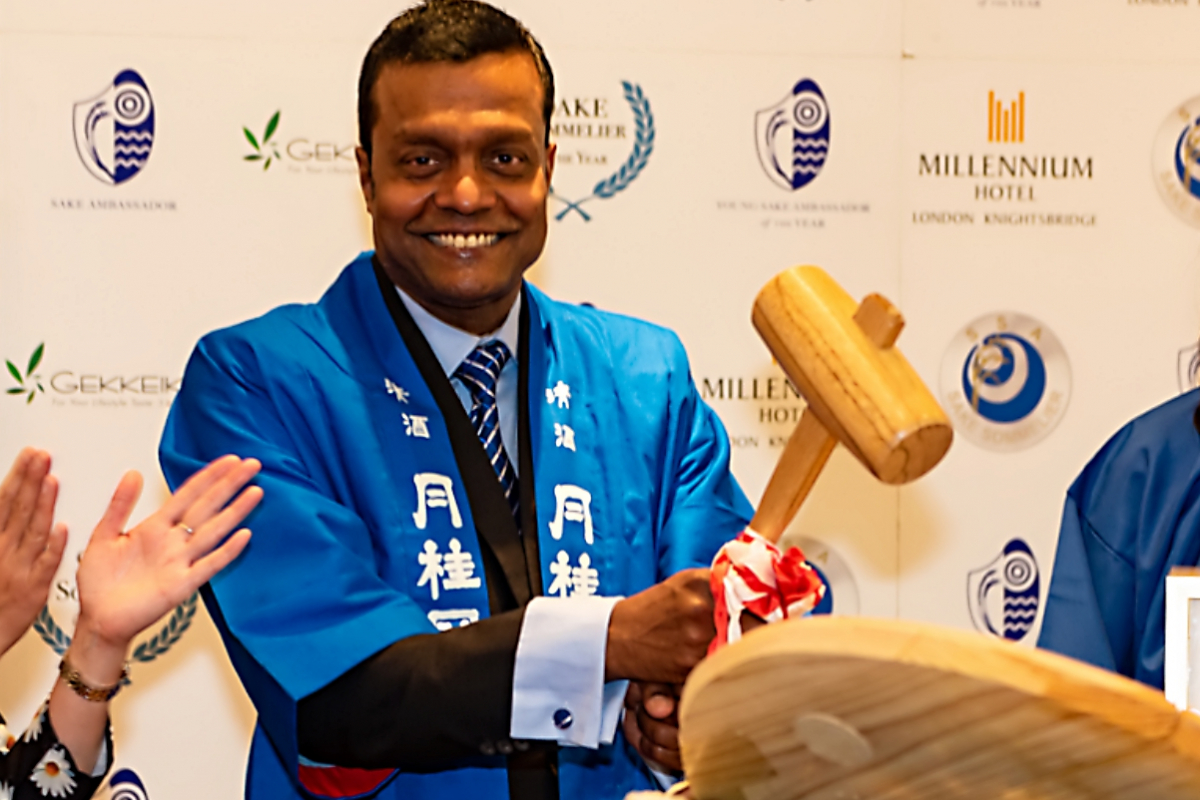 Mutton briyani with sake? Joshua Kalinan says why not.

The 52-year-old inflight auditor/air sommelier at Singapore Airlines recently won the coveted Sake Sommelier of The Year title, bestowed by the Sake Sommelier Association, an organisation based in the UK.

The annual competition pitted sake experts from all over the world against each other to show their savoir-faire in the Japanese staple. And this year, Joshua Kalinan took home the grand prize — the first Singaporean to do so. Right after his win, Kalinan customarily donned a Happi coat (no doubt feeling very happy himself) to take part in a Japanese traditional ceremony known as kagamibiraki, whereby he struck the lid of a sake barrel with a wooden mallet — a ritual performed during the most sacred of celebrations.

And there’s lots to celebrate about. It was Kalinan’s third time trying to clinch the top spot. “I took part in the competition three times. The first time, I reached the semi finals, and two years ago, I was named runner-up. This year, I’m the winner,” Kalinan beams.

Held in London on May 20, this year’s finals saw Kalinan go through six gruelling tasks, culminating with a food-pairing challenge. He had to match different types of sake with Chinese dishes, such as deep fried prawns, spring rolls and teriyaki beef. To sweeten the deal, chocolate was added to the table. For that cocoa pairing, he chose the Kijoshu sake variety, often considered to be dessert sake.

“For Kijoshu, sake is used to make sake [instead of water]. The result is a sweet sake. I even told the judges I would pair it with pan fried foie gras and grilled pineapple for a sweet balance, and they were a bit stunned. I believe in very unconventional ways of pairing food with sake.”

So much so that even Indian food is not glossed over from the menu of this unconventional — in more ways than one — sake sommelier. Ethnically Indian, the food-loving Singaporean says, “I would love to pair sake with North Indian cuisine. From tandoori chicken, which will go well with the earthy Kimoto-style sake, to creamy butter chicken, which can be paired with something sweet and slightly acidic. For the fried stuff, I’d choose dry sakes, which is refreshing — maybe a Junmai or Karakuchi.”

The fearless sommelier has even paired sake with cream of mushroom soup. “With a five-year-old Koshu [aged sake], it brings out the sweetness of the soup. Sake can go with lots of dishes. And today, the trend is to serve sake in a wine glass instead of the small kikichoko porcelain glass. Though the cups are beautiful and ceremonial, I think the switch to wine glasses is a modern, more agreeable approach. It works because it opens up the aroma too.”

With such dilation of serving styles, we wonder if the drink will lose its traditional values. Joshua Kalinan doesn’t think so. “You can still relate to what is in the glass, which is the most important thing,” he retorts.

For the sake of sake, Kalinan is correspondingly hoping for a rejuvenation. Though sake is getting popular elsewhere, it is a downward trend in its homeland. Many Japanese these days tend to drink whiskies and shoju instead, as Kalinan observes. Therefore, there is a sense of urgency for this sommelier to spread his love and passion for the brew. “I have to keep on learning and encourage people to do the same,” he says.

SEE ALSO: How to invest in single-malt whiskies

Yet, studying didn’t always come naturally for Joshua Kalinan. Back in primary school, he was a slow learner and was often called up by the principal for public caning at school. He also failed his PSLE triply. At his lowest, Kalinan remembers the words of his father, “My dad, who passed away five years ago at 73, told me then: ‘You’ve played enough, you better do well this time’ and that was the turning point in my life.”

Through further encouragements from his dad and teachers, he put all his efforts into studying. “I’m happy to say that I have an MBA today,” Kalinan declares.

The inflight auditor/air sommelier took his master’s degree while he took to the skies. He’s been with Singapore Airlines for just shy of three decades and credits the company for kickstarting his love for tipples too. “I’m actually a wine person,” Kalinan confesses.  “With the encouragement of my bosses, I signed up to be a certified sommelier with the Court of Master Sommeliers 10 to 12 years ago. And it was when I went to Japan to take the Certified Wine Educator exam five years ago that I got hooked on sake.”

The jump from wine to sake wasn’t easy. For starters, language is a barrier. How does Kalinan break this barrier? “I learn by looking at countless of labels,” he simply explains. “I may not know kanji but I manage to memorise the words, the different characters on bottles.”

You can tell the man puts in the hours, to learn and improve his self-professed “handicaps”. At the moment, the person Kalinan admires the most is Philip Harper, the first non-Japanese toji (master brewer), a Briton employed by Tamagawa brewery in Kyoto. “I met him a year ago and asked if he has any advice for me as I was about to study sake full-on at the National Research Institute of Brewing thanks to a scholarship by the Japan Sake and Shochu Makers Association. He told me that I really needed to know the Japanese characters and that really woke me up. It meant that there’s no shortcuts to success so I began to read continuously. Every time I entered a Japanese restaurant, I made sure I don’t look at the English text but the Japanese labelling instead so that I become more familiar with each word.”

Joshua Kalinan says that he is comfortable with the language now. “I’m still learning,” he humbly clarifies. “And I want to demystify sake so that it can be enjoyed by everyone — young or old.”

Having a four-year-old daughter hasn’t allowed this busy dad much time to let his guard down either. Besides making breakfast (envision blueberry pancakes) with his little girl Calista, the first-time father has also, within limits, tried to educate the preschooler about sake. Unfortunately but understandably, Calista took a sniff and said, “Eee… smelly, daddy.” Well, maybe in the future she’ll take to wine first before fully embracing sake like her daddy.