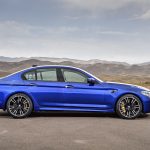 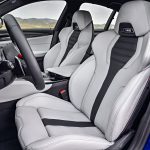 Pursuits
2018 BMW M5: Is This The Baddest M Car Ever?
Share
Next article

Ahead of its official debut at next month’s Frankfurt motor show, BMW has revealed photographs and full details of the high-performance M5 version of its current G30 5-Series. Said to be the fastest road-going Beemer ever, it’s also jam-packed with tech: it’s the first Motorsport-badged 5 to feature M xDrive all-wheel drive, a smart system that only engages the front wheels when those at the back have reached the limits of adhesion (for extreme nuttiness it can even be set to rear-only mode). And that should mean that this mighty four-door is as fun to drive as it’s adroit and sure-footed.

With a 4.4-litre biturbo V8 under its bonnet, whose 592bhp and 750Nm are transmitted through an eight-speed, multi-mode Steptronic gearbox, it’s massively fast. How fast? Well, with acceleration to 100km/h in 3.4 seconds and a maximum speed of 250 (extendable, with the optional M Driver’s Package to 305km/h), on paper it’s almost exactly as rapid as its closest competitor, the AMG E 63 S, which until this new M5 arrived held the gold medal for insanity among big, fast and luxurious automobiles.

As to whether the Beemer or the Merc is the badder, however, you’ll need to wait a little while to find out: deliveries of the new M5 won’t begin until February.

CARS
Jon Wall
Editor-in-Chief
A Hong Kong resident for more than 30 years, Jon has worked on publications devoted to culture, travel and lifestyle, as well as a short stint in daily newspapers, since the late ‘70s. He loves travel, literature, jazz, wine, aircraft and, especially, motor cars – and has occasionally been known to knock together a reasonably edible meal.
Motoring travel watches Boats wine Music men's style
Sign up to get the latest luxury and lifestyle news delivered to your inbox.