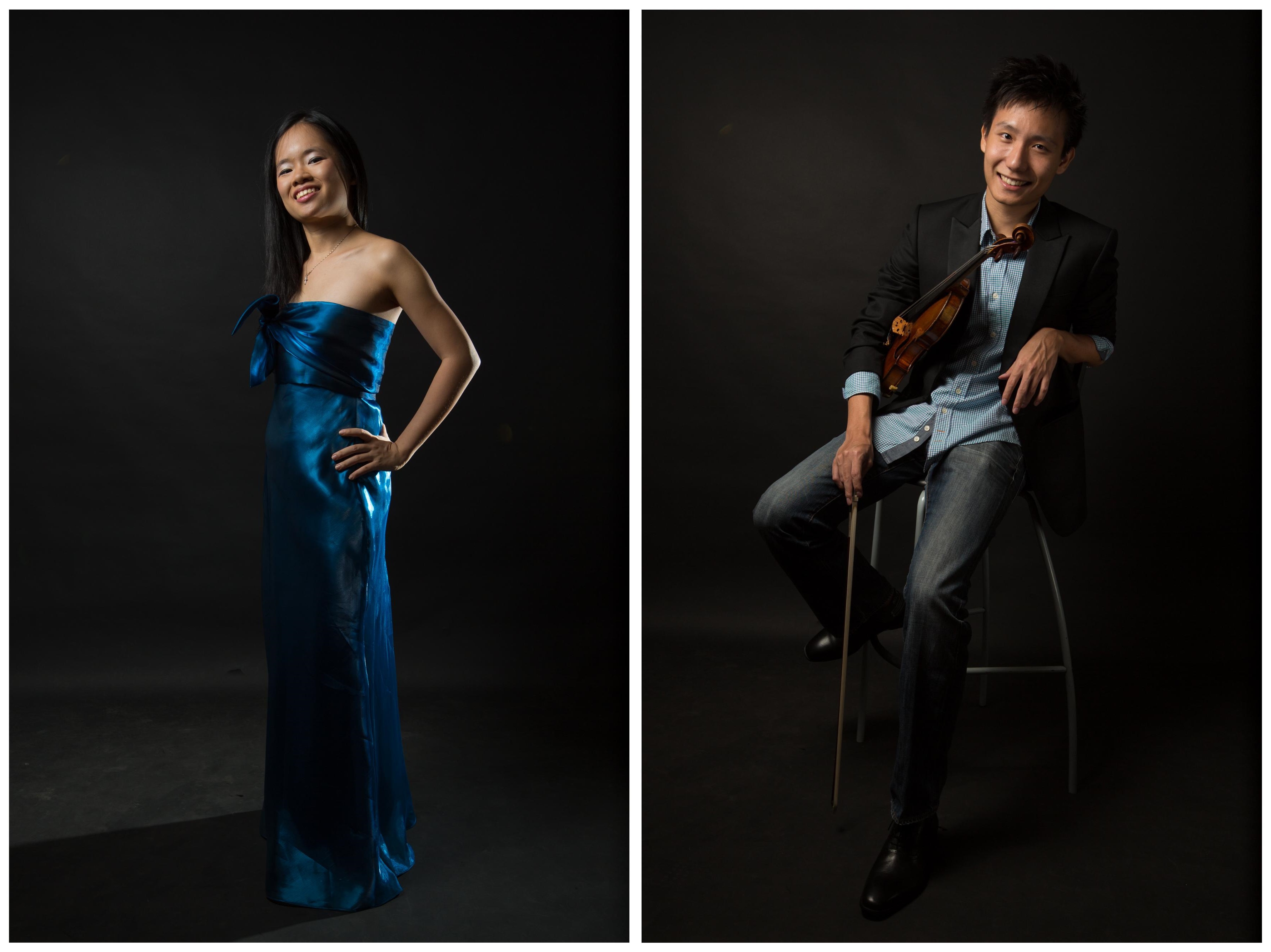 Keeping classical music fresh, approachable and unpretentious is what More Than Music does best. After their September 2016 concert Songs of Travel, during which the audience admired at leisure travel photography by Joyce Le Mesurier displayed within the Esplanade Recital Studio, More Than Music‘s co-founders, pianist Abigail Sin and violinist Loh Jun Hong, are now introducing wine into their chamber music series, blurring the line between a concert and an intimate soiree.

For More Than Music & Wine, the duo will perform Maurice Ravel’s Sonata Posthume For Violin And Piano (1897); Camille Saint-Saëns’ Introduction and Rondo Capriccioso, Op. 28; Gabriel Fauré’s Sonata for Violin and Piano No 1 in A major, Op 13; and Richard Strauss’ Sonata for Violin and Piano in E flat Major, Op. 18; as well as a segment of post-concert encores, with four wines being presented over the course of the evening: Australian winemaker La La Land‘s Vermentino 2017 and Garnacha 2017 during the concert, and Rose 2017 and Tempranillo 2016 during the after-concert reception.

Alison Harvey, South East Asia and Hong Kong manager for wine partner Grupo Freixenet, will be introducing the wine, so the audience will hear “tasting notes” for both the music and the wine during the performances.

“I still love attending traditional recitals myself,” Sin says via email. “But sometimes I wish that audiences could actively participate in the experience more, rather being expected to just sit there for an hour and a half.”

“The way we talk about music has parallels with how people talk about wine and food,” she adds. “We instinctively reach out for metaphors — in one of my scores, I described a particular sound I was aiming for as rich dark melted chocolate! Music and wine can also conjure up memories and stories about places and people. I think it’s a natural pairing!

How should the audience appreciate music and wine together?
Loh Jun Hong (LJH): The idea is that we wanted to have a multi-sensory approach to our concert, so instead of just listening with the ears through our music, audiences will get to taste the wine as an extra dimension to the experience.

Abigail Sin (AS): I think this concept will be a success if the audience is inspired to let their imagination take flight, by thinking about a scene or memory the music calls to mind, physical sensations the wine evokes, and how this all links to the music.

Alison Harvey (AH): Wine and music appeal to different senses, so I don’t think we need to get too hung up on complementarity. Whereas wine has to match food, we can be fairly free in pairing wine with music.

How was the wine list selected to complement the programme?
LJH: At first we had the idea of having French music with French wine. But after some discussion, we felt that that was too limiting and a relationship purely based on geographic location might not be the best. Instead we decided on a light and more impressionistic texture for the white Vermentino, and a more passionate repertoire for the red Garnacha.

AH: I suggested our La La Land range because it is free-spirited and unconventional. The grape varieties are all non-traditional and somehow it seemed perfect for this occasion. La La Land wines were also chosen as the official wines of the Melbourne International Jazz Festival last year.

Any examples of how a particular piece works with a particular wine?
AS: With this programme, I love how sensual the music is — how strongly the varieties of musical textures trigger all our senses. The harmonies and textures of the Ravel are like wafting, multi-layered perfumes. The Saint-Saëns is scintillating and effervescent. The Fauré is warm and lyrical, while the Strauss is full-bodied and passionate. Our choices of wine reflect the variety and contrast inherent in the music.

LJH: Ravel’s Sonata Posthume for Violin and Piano is a lovely piece with a ton of colour and flavour that has a very impressionistic feel to it: One moment you have a whiff of a curious fluffy colour, and the next we’ll be enjoying a serene melody. I thought that a refreshing white wine paired with this would be perfect.

AH: A sweet wine can be appreciated for its delicacy, intensity or crisp acidity and can match with music that is delicate or intense or crisp. A heavy red might have a voluptuous velvety texture with complex flavour and a long finish and match with an emotional movement from an orchestral symphony or an intricate four-part fugue for keyboard. The decision is all down to the mood of the listener.

What’s something new that you’ve learned through collaborating on this concert?
AS: As musicians, I’m used to the vocabulary and intricate details of discussing classical music. Working on this concert has definitely opened my eyes to the similarly complex and fascinating world of wine.

LJH: Having Alison and her team telling me about the history of wine and the different kinds of soil and methods used was fascinating. Oh and I never knew we needed an alcohol license to serve wine at an event!

AH: I’ve been introduced to some new music and it’s really made me think more about the pairing issue and the extent to which mood and context determine our choices of what to listen to and what to drink.

Is this format how you regularly savour your music and wine in your downtime?
AS: I’m still working on my PhD at the Royal Academy of Music in London, where wine is cheaper and more plentiful than it is in Singapore. A chilled rosé in the summer or a glass of red while listening to music and getting some writing done at night sound pretty good to me!

LJH: I would often have music playing in the background while my friends and I enjoy our drinks. But I think having the music performed live takes it to another whole new level!

AH: I regularly wind down with a glass of wine and some music, plus I play piano and violin, and viola in a string quartet. While it is not advisable to drink wine during rehearsal or practice, a glass afterwards is always welcome, and sipping still or sparkling wine during the interval at a concert is definitely recommended.

Wine writers refer to structure, balance and harmony to describe and evaluate wines, using the same vocabulary we use to describe music. Each individual’s perception of flavour is personal and unique, and although we can listen to the same piece of music repeatedly, inevitably each listener’s perception will be individual to them, so in many ways the appreciation of both wine and music is difficult to quantify and express in words. Sometimes wine writing and music criticism can be rather esoteric and dismissed as pretentious, but wine and music are a match made in heaven.

Cartier Christmas 2020: Give the gift of timeless luxury with our picks from the maison