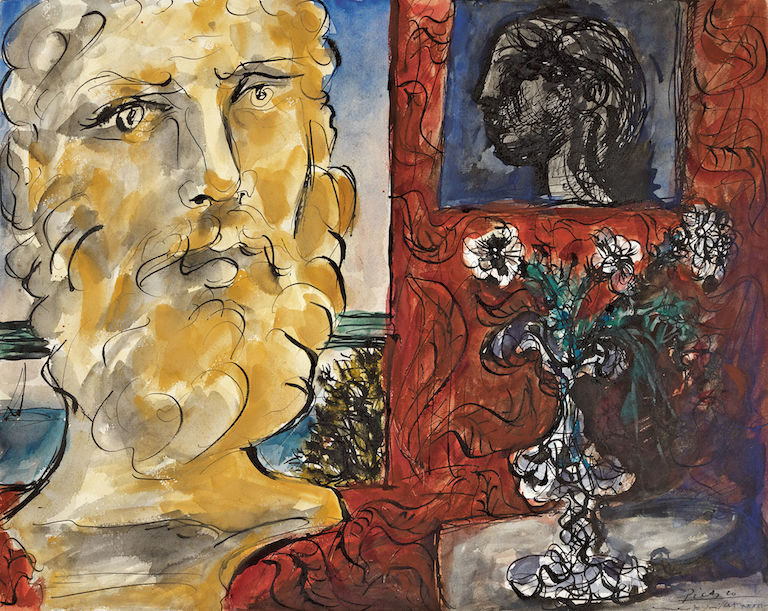 A still life artwork created in 1933 while Pablo Picasso was on holiday in Cannes with his wife Olga, is expected to achieve up to US$7 million (S$9.5 million) tomorrow at a Sotheby’s auction. Titled “Nature morte à la tête classique et au bouquet de fleurs”, it will go under the hammer for the first time in over 35 years at the Impressionist and Modern Art evening sale in New York.

The watercolour piece was created when the famed artist’s personal life was in disarray, and depicts the likeness of his mistress and principal muse, Marie-Thérèse Walter. Picasso had reflected in his work on the traditional embodied interaction of artist and model, and replaced these with sculpted avatars. In place of himself is a bearded neo-classical bust, while the model is substituted by a bas-relief sculpture of Walter.

“Nature morte à la tête classique et au bouquet de fleurs” was completed at a time when the Spanish artist did not create a single painting, and chose to focus his creative energy on a series of colourful gouaches and watercolours that called on classical legends such as that of Pygmalion and Persephone. It was held in the private collection of renowned Surrealist poet Edward James for more than three decades before going to auction alongside masterpieces by René Magritte, Alberto Giacometti and Edgar Degas.

Sotheby’s estimates that this vibrant gouache will sell for between US$5 and US$7 million (S$6.8 million and S$9.5 million) — a modest pre-sale estimate compared to Picasso’s current auction record of US$115 million (S$156 million) set in May 2018 for “Young Girl with a Flower Basket.”

“We are thrilled to present one of the most exquisite watercolours by Pablo Picasso ever to come on the market. This magnificent work represents the pinnacle of Picasso’s artistic powers… With many outstanding paintings by Picasso appearing at auction over the past few seasons, it is refreshing to offer an example of his mastery in this intimate medium,” said Julian Dawes, who is the head of Sotheby’s Impressionist & Modern Art evening sale, in a statement.

“Nature morte à la tête classique et au bouquet de fleurs” is currently on view in the auction house’s York Avenue galleries, with the exhibition marking its first public viewing in the US.