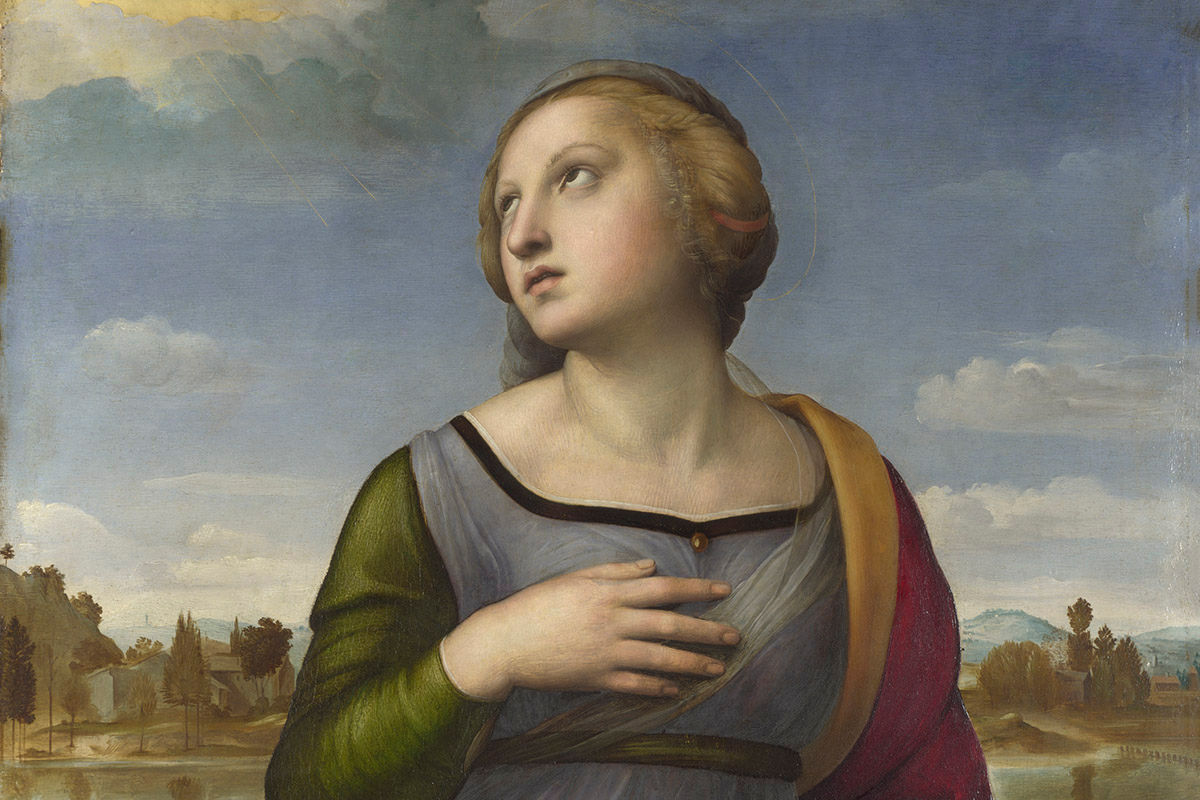 In April, London’s National Gallery unveils its highly anticipated Raphael exhibit – an incredible collection of paintings, drawings, and more, all assembled for the first time under one roof. Prestige reflects on the famed artist’s brief but brilliant career, and the priceless legacy he left behind.

At the moment the art world is going crazy for NFTs, many of which are increasing in value at a dizzying rate (as evidenced by the headline grabbing price tags attached to them). At the opposite end of the art world, however, there exists a finite amount of paintings, sculptures, and precious objects to which the term “priceless” has aptly been applied. No singular value can be put on these tangible historic masterpieces, and unlike NFTs they are – for the most part – available to all through the generosity of the world’s most prestigious museums. This April, an incredible selection of undeniably priceless art will be on display when London’s National Gallery finally unveils their long-awaited Raphael retrospective.

Scheduled to run from April 9 to July 31, ‘The Credit Suisse Exhibition: Raphael’ will bring together numerous pieces from around the globe, with the aim of exploring this Renaissance master’s complete career; examining not only his celebrated paintings and drawings, but also his work in architecture, poetry, and designs for sculpture, tapestry, and prints. It’s an unprecedented opportunity to see the full breadth of this unique artist’s skill, creativity, and ingenuity, while also shining a spotlight on those who influenced Raphael, and those he himself later influenced.

In addition to the National Gallery’s own collection of Raphaels and other related pieces, the upcoming exhibition will include pieces on loan from The Hermitage, the Louvre, the National Gallery of Art in Washington, the Prado Museum, the Museum of Fine Arts in Budapest, the Uffizi Museum, the Vatican Museum, and the privately owned Galleria Doria Pamphilj in Rome. Even some of the works that can’t be transported to London, such as the monumental frescoed rooms in the Vatican Palace, will be presented in what the National Gallery calls “innovative ways”.

He was born Raffaello Sanzio da Urbino, in 1483, in the Duchy of Urbino, not far from modern day Florence. He came from an artistic family, as his father was court painter to the Duke of Urbino. Raphael was just eleven when his father died, and historical records indicate that he played a role in managing the family workshop from that point onwards. He later trained as an apprentice in the workshop of the acclaimed master painter Pietro Perugino, and was declared a fully trained “master” himself by the year 1500 (when he was all of 17).

In the years that followed, Raphael worked in various centres in Northern Italy but also spent considerable time in Florence, which in the early 16th century was a hotbed of creativity. Together with his contemporaries Leonardo da Vinci (31 years his senior) and Michelangelo (eight year his senior), he soon completed the High Renaissance trifecta of great Italian artists. And like his legendary counterparts, he showed himself to be a master of many disciplines – prolific as a painter, draughtsman, architect, archaeologist, and more.

The influence that Leonardo had on young Raphael during those early years of the 1500s is well documented by art historians. In his portraits from this period the figures began to take on more dynamic and complex positioning, with one example borrowing from the three-quarter length pyramidal composition of da Vinci’s just-completed ‘Mona Lisa’. Another of Leonardo’s compositional trademarks, namely the “Holy Family pyramid”, was replicated in a series of works that rank amongst Raphael’s most famous paintings. A splendid example is ‘The Garvagh Madonna’ (also called ‘Madonna and Child with the Infant Baptist’), which dates from about 1510 and is one of the prized pieces set to be on display as part of the upcoming London show.

After Florence, Raphael moved to Rome – at the invitation of the new pope, Julius II – and the eternal city became his primary residence for the remainder of his life. The year that he arrived, 1508, was coincidentally the same year that Michelangelo began painting the Sistine Chapel ceiling, and thus began one of the most bitter rivalries of the Renaissance, with the elder artist making no attempt to conceal his disdain for the young upshot encroaching on his turf.

In 1511, a year before Michelangelo finally completed the Sistine Chapel, Raphael had already put the finishing touches on what would become his most famous fresco, ‘The School of Athens’; an approximately 5- x 8-metre masterpiece commissioned by the pope as part of the decorations for the rooms now known as the Stanze di Raffaello, located in the Apostolic Palace of the Vatican. The painting depicts the great figures of classical antiquity, and amongst its cast of characters Raphael painted Leonardo as Plato, himself as Apelles of Kos (a renowned painter of ancient Greece), and poor Michelangelo as the philosopher Heraclitus, who was known for his sour temper and bitterness towards all rivals.

Even before revealing his talent for frescoes, young Raphael – who was then still just shy of 30 – had created numerous masterworks in oil, some of which are part of the National Gallery’s own permanent collection. These mainly religiously themed paintings include: ‘The Procession to Calvary’ (1504-5); ‘The Ansidei Madonna’ (1505); ‘The Terranuova Madonna’ (1504-5); ‘The Madonna of the Pinks’ (1506-7); ‘Saint Catherine of Alexandria’ (circa 1507); and ‘The Esterházy Madonna’ (1508). In 1512, four years after his move to Rome, he completed the magnificent portrait of his benefactor Pope Julius II, which the oft-quoted art biographer Giorgio Vasari later described by saying “it was so lifelike and true it frightened everyone who saw it, as if it were the living man himself”.

Raphael’s star continued to rise during his time in Rome, and after the death of Donato Bramante in 1514 he was appointed the architect in charge of completing Saint Peter’s Basilica. From 1517 onwards he lived a life of exceeding comfort in the Palazzo Caprini, and was later made a ‘Groom of the Chamber’ of the pope – which gave him additional income and an elevated social status – as well as a knight of the Papal Order of the Golden Spur. He was also said to have had many romantic entanglements, and the beautiful painting known as ‘La Fornarina’ immortalises his main mistress in Rome, Margherita Luti (the daughter of a baker).

In the spring of 1520, at the age of 37, Raphael died – eight days after contracting a fever. His grand funeral was attended by large crowds, and it was even reported at the time that there were “four cardinals dressed in purple who carried his body, the hand of which was kissed by the Pope”. And while his life was short by today’s standards, his impact and influence remain powerful to this day. His career spanned just two decades, but in that brief time he helped shaped the course of Western culture like few artists have before or since.

The National Gallery’s upcoming exhibition was originally scheduled for 2020, to coincide with the 500th anniversary of the artist’s death, but the Covid crisis effectively scuttled those plans. Thankfully, the museum persevered with the project, and the fruits of those labours will be on display till midway through the summer. Of course, there really doesn’t need to be any particular anniversary tie-in when it comes to staging a show such as this, as these magnificent artworks are as timeless as they are priceless.