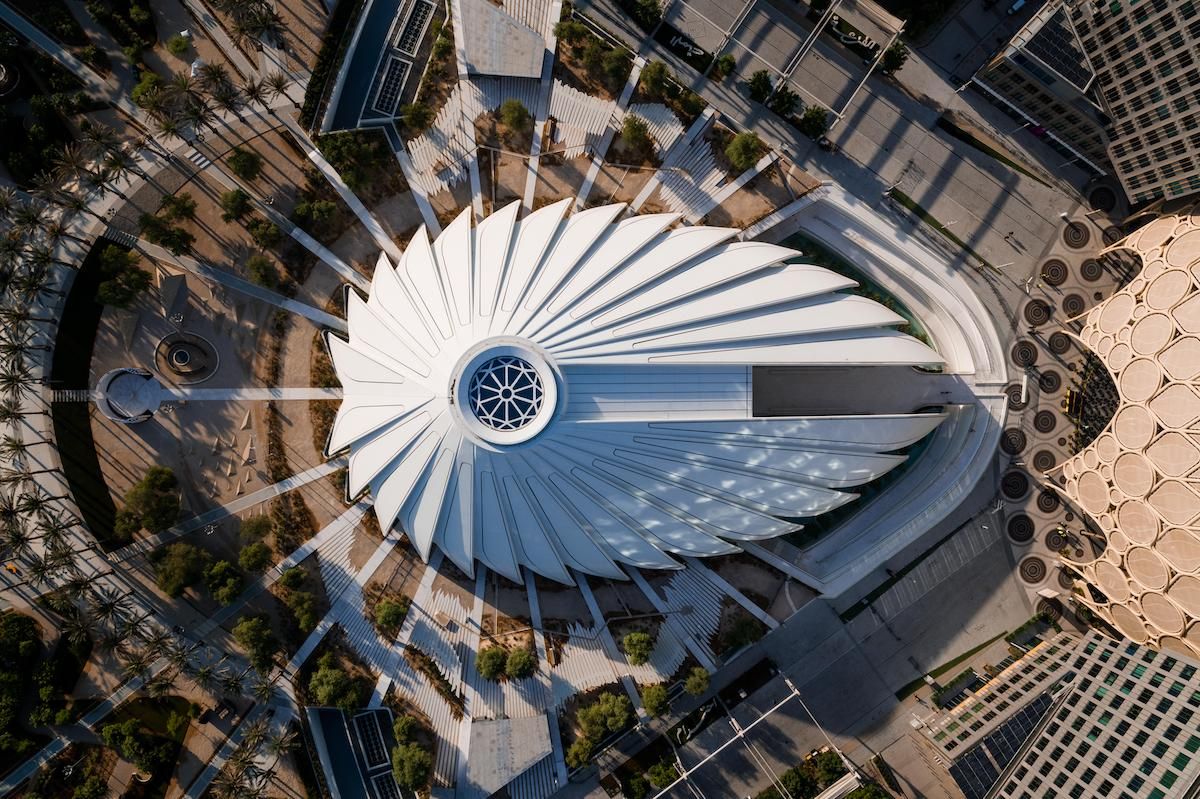 Pursuits
Expo 2020 Dubai: The most breathtaking pavilions to see
Share
Next article

One of the many reasons to visit Expo 2020 Dubai is to witness first-hand the eye-popping architecture of the various country and theme pavilions. Bruce Scott takes a closer look at some of the most impressive and inventive examples.

In May of 1851, the Great Exhibition – also known as the Crystal Palace Exhibition – got underway in London’s Hyde Park. It ran for just over six months, and was attended by the likes of Charles Darwin, Karl Marx, Michael Faraday, Charlotte Bronté, Charles Dickens, Lewis Carroll, and many other Victorian era notables. It showcased “the works of industry of all nations” and is generally considered the first of the many World’s Fairs to have been staged over the past century and a half.

After the groundbreaking Expo 67 held in Montreal, Canada, these fairs became officially known as Expos. And last October, the opening of Expo 2020 Dubai marked the first time such an event has taken place in the Middle East, Africa or South Asia. Of course, the global pandemic crisis forced the event to be delayed by more than a year, which is why it’s still referred to as Expo 2020. However, the upshot of this is that there’s still time to visit Dubai and catch this mammoth extravaganza, which continues until Mar 31, 2022. Over its six-month run, organisers estimate that 25 million visitors will visit the site.

The three core concepts underlying Expo 2020 are sustainability, mobility and opportunity, while the overall thematic message is “Connecting Minds, Creating the Future”. More than 190 countries are participating, and each nation has its own pavilion; offering an abundance of sights, sounds, tastes, and culturally significant displays for visitors to explore and experience.

What’s equally impressive is that many of the country and theme pavilions themselves are breathtaking architectural creations employing cutting-edge technology and building materials. We picked eight particularly striking examples, brought to life by some of the world’s leading architectural and design firms.

Since the United Arab Emirates is the host country for the 2020 Expo, it only stands to reason that the UAE Pavilion would be nothing short of spectacular. Designed by the Swiss-Spanish architect Santiago Calatrava, this futuristic structure takes its inspiration from the shape of a falcon’s wings. Situated at the heart of the 4.38 sq km site, it’s described by the architect as “a symbol of the UAE’s bold and daring spirit, reflected in what is poised to be the most inclusive and global Expo in history”.

In total, the pavilion – which was designed to meet LEED Platinum sustainable building standards – measures approximately 15,000 sq m and includes numerous exhibition areas, an auditorium, food and beverage outlets, and VIP lounges. The remarkable roof structure is composed of 28 “wings” – controlled by 46 hydraulic actuators, functioning as pistons – that can open and close, making the pavilion seem almost alive.

The architect’s commitment to sustainable design is further evidenced by the photovoltaic panels that are built into the roof ’s structure. In addition to being integrated with the opened wings, they also serve as protection from rain and sandstorms when they are closed, and absorb sunlight to harvest energy once opened.

As one of Expo 2020 Dubai’s three signature pavilions based on themes, Alif – The Mobility Pavilion was designed by Foster + Partners, a global studio focused on sustainable architecture with offices around the world. The name alif derives from the first letter of the Arabic alphabet, symbolising new beginnings and new horizons.  Its ribbed, curved shape, which expands outwards as it rises, was envisioned to express movement, with mirror-like, stainless-steel cladding – inspired by chrome fenders and aircraft wings – designed to reflect heat and also reflect the movement o the surrounding area. This self-shading building also features photovoltaic panels on the roof to collect valuable solar energy.

Internally, the space is divided into three key zones, each forming a petal in the tri-foil plan. The central core features the world’s largest passenger lift, capable of holding more than 160 people, although with social distancing measures in place the limit is just 38. This platform takes visitors to the third level, where they can then move down through successive interconnected galleries to the lower ground floor, viewing innovative, immersive and interactive visitor experiences that illustrate the mobility theme. In addition, a partly underground, partly open-air 330m track showcases cutting-edge mobility devices in action.

Also known as “The Green Arch”, the Belgian Pavilion is a collaborative project involving the Paris-based Vincent Callebaut Architectures and the Bruxelles-based Assar Architects. It was conceived as an ode to the regenerative circular economy, bio-based and geo-sourced materials, and the preservation of biodiversity and nature.

Located in the Expo’s Mobility District, it offers visitors the site’s largest shaded agora (public space), which is naturally ventilated by Dubai’s prevailing west-east winds. The street furniture in the ground floor’s public area has been entirely created from 3D-printed white concrete, while the curvaceous vault above – a hyperbolic paraboloid, which derives its structural integrity from its shape rather than its mass – is built using beams of cross-laminated timber. Inside the pavilion, visitors are met with a futuristic escalator, designed as a spacetime tunnel, which leads to the various immersive displays within.

The pavilion is also covered with a large photovoltaic and thermal solar canopy, producing electricity and hot water for the building’s own consumption. Perhaps most striking is the biophilic aspect of the architecture, in which the rooftop and balconies are planted with more than 2,500 plants, shrubs and trees. These “breathable” terraces are naturally refreshed through evapotranspiration from the plants.

The eye-popping Al Wasl Plaza is meant to serve as the core structure of the site, linking the three thematic districts and underscoring the event’s overall message of “Connecting Minds, Creating the Future” (as al wasl means “connection” in Arabic). The plaza measures 150m in diameter, and was envisioned as a grand meeting place for hosting such large-scale functions as the exhibition’s own opening ceremonies.

Designed by the US-based firm Adrian Smith + Gordon Gill Architecture, it’s topped with a stunning, futuristic dome, whose intricate and lattice-like construction transforms it into a kaleidoscopic 360-degree projection surface. Visuals displayed on it are visible from within and outside, offering an unparalleled and ever-changing experience for visitors.

The dome is also a 3D visualisation of the Expo 2020 logo and weighs more than 2,500 tonnes (as heavy as 25 blue whales, th PR material points out). It’s comprised of 13.6km of steel, and is made up of hundreds of individual elements welded together with intricate precision. The finished structure stands 67.5m tall – higher than the Leaning Tower of Pisa – and is definitely the jewel of the Expo’s crown.

Planting trees and increasing green spaces is the most widely available and effective way to combat the effects of man-made climate change, and this idea is the core concept underlying the Singapore Pavilion. It was designed by WOHA, a Singapore-based firm known for researching and innovating new architectural and urban solutions to tackle population growth, urbanisation and the rapid loss of biodiversity.

The structure on display in Dubai integrates landscaping into its design, showing that the built environment does not need to displace nature. As WOHA’s own architect’s statement points out: “With its theme of ‘Nature, Nurture, Future’, the pavilion encapsulates Singapore’s story of overcoming its physical limitations as a small island city-state, and adapting itself to become a liveable and biophilic city of the future.”

Located in Expo 2020’s Sustainability District, the pavilion ushers visitors into a verdant oasis of greenery, with trees, shrubs and colourful orchids – all in the middle of the Arabian desert. Best described as a three-dimensional garden, the building includes a series of raised walkways that wrap around three plant-covered cones. In addition, this self-sufficient ecosystem is powered by rooftop photovoltaic panels in an effort to achieve net-zero energy while in operation.

The colourfully avant-garde Russia Pavilion, designed by the Russian-German architect Sergei Tchoban, is situated within the Mobility District. Standing 27m high, it’s made up of two domes – one inside the other, like the famous Russian matryoshka nesting doll. But what’s most mesmerising is the vibrant, multicoloured facade, constructed of intertwined thread-like pipes that are meant to symbolise harmonious co-existence and diversity. Interestingly, the architect has also likened its appearance to the coloured lines a flow of heavy traffic creates at night in a big city.

These more than 1,000 “threads”, made from aluminium tubes with a diameter of 8cm, have a combined length of 46km. Once the tubes were manufactured and shaped, they were coated with a brightly coloured polymer to protect them from fading under the harsh desert sun. And while there are only six colours used, the countless number of combinations on the surface form a constantly changing tonal palette. The building is also surrounded by a decorative pool of water, which helps to maintain a comfortable microclimate around the pavilion and also serves as a gigantic reflecting mirror.

The UK Pavilion, which resembles a giant wooden conical musical instrument, was created by leading artist and designer Es Devlin. Also called “The Poem Pavilion”, it gathers the individual words each visitor is invited to submit, and uses an advanced machine learning algorithm to generate a cumulative collective poem – with a new poem generated every minute – which is displayed in both English and Arabic across the 20m-diameter facade, or “mouthpiece”. Devlin, who has been exploring the concept of machine-generated poetry since 2016, collaborated on the design with structural engineers Atelier One, environmental design consultants Atelier Ten, executive architects Veretec and the creative agency Avantgarde.

The pavilion’s eco-conscious construction uses cross-laminated timber, sourced from sustainably managed European forests in Austria and Italy. Inside the pavilion, the magnificent Choral Space completes the artwork with the ambient sounds of a choral soundtrack, which melds the voices of multicultural choirs from across the United Kingdom. The overall concept was inspired by Breakthrough Message, physicist Stephen Hawking’s final project (before his death in 2018) which invited people from across the planet to create a common language to represent humanity – in the event that we ever encounter other advanced civilisations.

One of the top attractions of Expo 2020 Dubai is Terra – The Sustainability Pavilion, which embodies intelligent strategies for future living. Created by Grimshaw Global – an architectural design partnership with offices in Los Angeles, New York, London, Paris, Dubai, Melbourne and Sydney – this immense sci-fi structure uses pioneering technologies to harvest energy from sunlight and fresh water from the air.

Surrounded by demonstration gardens, winding pathways and shaded enclaves, the pavilion is like a self-contained micro-ecosystem. The underground portion uses the insulating properties of the earth to shield it from the desert heat, while the aboveground surfaces are clad with a gabion rainscreen wall – sourced with local stone from the Hajar Mountains – which absorbs heat and reflects solar rays. Water efficiency, meanwhile, is maintained through a series of closed loop systems designed to filter, supply and recycle water.

The outer canopy is covered in ultra-efficient monocrystalline photovoltaic cells embedded in glass panels, while the overall form of the canopy directs cooler air in and expels low-lying hot air through a “chimney” in the centre. The entire pavilion is further complemented by 19 “E-Trees”, whose solar panels provide 28 per cent of the energy required to power the building. And just like the sunflower turns to follow the sun, these “trees” rotate 180 degrees throughout the course of the day to maximise their energy intake.

This story first appeared in the January 2021 issue of Prestige Singapore.