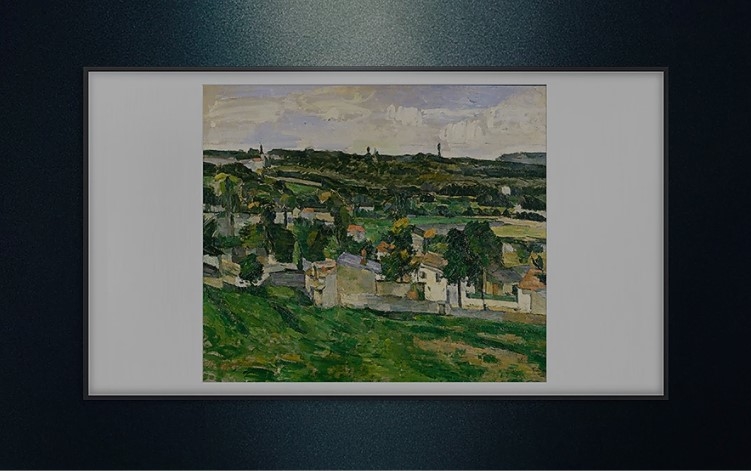 A new virtual exhibition is presenting 12 works of art you may never get to see in a museum. The exhibit, titled “Missing Masterpieces,” features works by the likes of Claude Monet, Paul Cézanne and Barbora Kysilkova, which have been missing for years. The aim is to raise public awareness about the illicit traffic of cultural artefacts.

The “Missing Masterpieces” exhibition has been created by Samsung in partnership with the art crimes expert, Dr Noah Charney, to raise public awareness about the illegal traffic of cultural artifacts. In fact, the FBI estimates that less than 10% of stolen artworks are ever recovered by authorities.

Some paintings featuring in “Missing Masterpieces” disappeared in circumstances worthy of Hollywood’s finest storylines. Paul Cézanne’s “View of Auvers-sur-Oise,” for example, once hung in the Ashmolean Museum in Oxford. However, thieves took advantage of 1999’s major New Year’s festivities to scale the scaffolding on an adjacent building, before entering the British museum through a skylight and stealing the painting. The thieves used a smoke bomb to block the museum’s motion sensors.

“Emma & Chloé” by Barbora Kysilkova was stolen in broad daylight from an art gallery in Oslo, Norway. Thieves took the time to meticulously remove the 200 nails holding the canvas to its frame, before making off with the canvas without attracting the attention of staff. Security camera footage led to the arrest of the thieves, but the portrait’s whereabouts remains unknown.

Nathan Sheffield, Samsung Europe Head of Visual Display, said, “Art is for the enjoyment of everyone, and we have a collective responsibility to protect and preserve our culture for future generations. This is why we are launching ‘Missing Masterpieces,’ to ensure priceless pieces that may never be seen again, can be enjoyed by as wide an audience as possible.”

Although “Missing Masterpieces” accompanies the launch of a new range of Samsung HD TVs, art crime expert and founder of The Association for Research into Crimes Against Art (ARCA), Dr Noah Charney, hopes that the exhibition will unearth new clues as to the whereabouts of these missing artworks.

“Before you get to work on a puzzle, you want to gather all the pieces, right? It’s the same with a crime or a mysterious loss. From contradictory media reports to speculation in Reddit feeds — the clues are out there, but the volume of information can be overwhelming. This is where technology and social media can help by bringing people together to assist the search. It’s not unheard of for an innocuous tip posted online to be the key that unlocks a case,” the expert explains.

Traffic booms during the pandemic
The “Missing Masterpieces” exhibition was launched in the days leading up to UNESCO‘s first International Day against Illicit Trafficking in Cultural Property, November 14. The event aims to encourage the international community to do more to tackle the problem, which robs people worldwide of their “culture, identity and history.”

While the traffic of cultural artefacts has been flourishing on the internet for years, the novel coronavirus pandemic has affected the surveillance of archeological sites and cultural institutions, leaving them more vulnerable to theft. Vincent van Gogh’s painting, “The Parsonage Garden at Nuenen in Spring” was stolen in the Netherlands in March, for example, while the Singer Laren Museum was closed to stop the spread of the virus.

“I am shocked and absolutely livid that this has happened,” said Evert van Os, the director of the Singer Laren Museum, in a statement at the time of the theft. UNECSO explains that the gallery was closed to the public due to covid-19, and that the theft “reminds us the need to be mobilized to fight effectively against the illicit trafficking of cultural property.”