The most expensive Banksy artworks sold at auctions 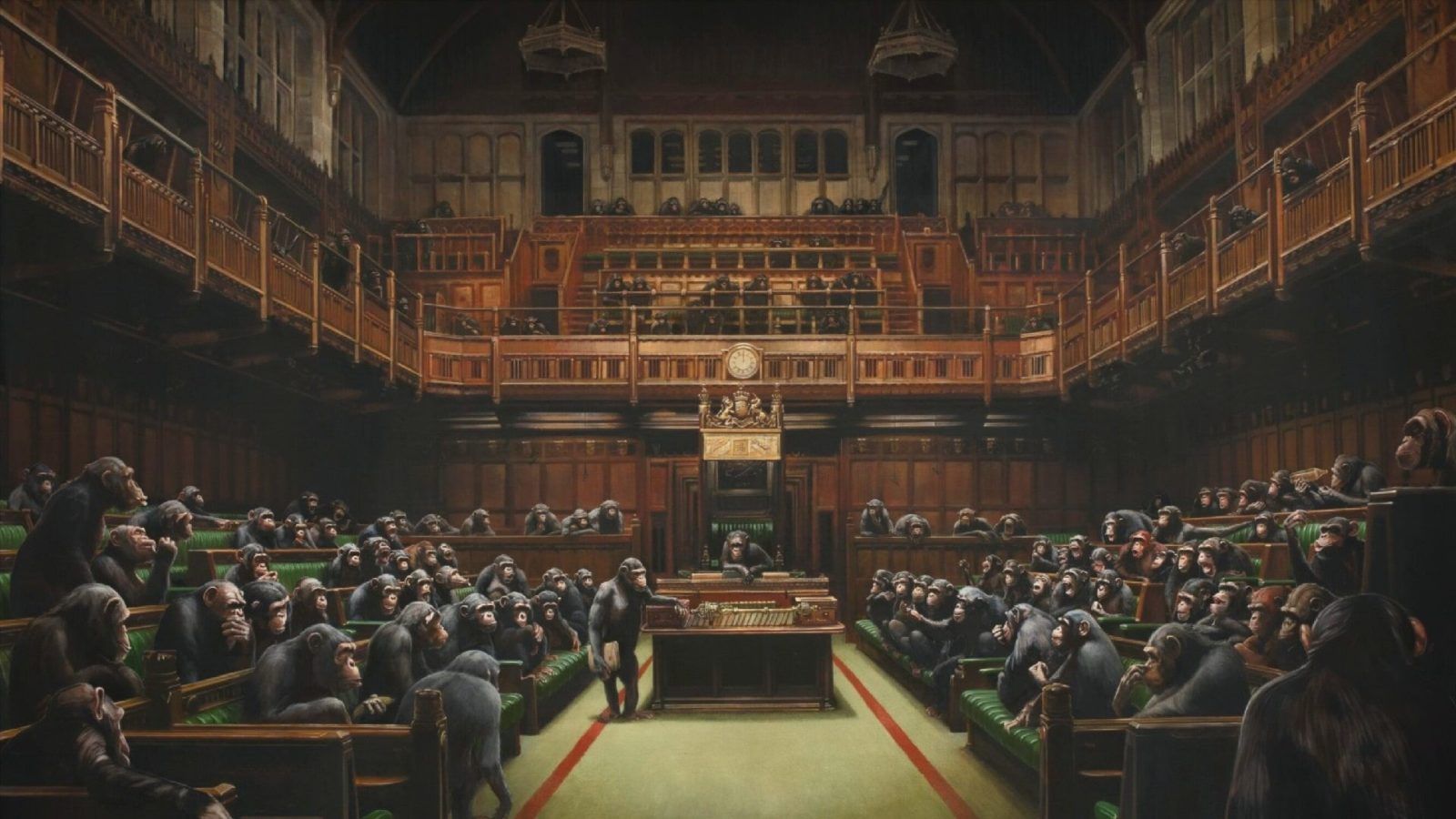 A world-renowned mystery man, here is a look at ten of the most expensive Banksy artworks sold at auctions around the world.

In the world of modern art, Banksy is a name everyone knows although they have no idea who the pseudonymous artist actually is. From working underground in Bristol in the 1990s, Banksy has become one of the most sought-after artists in the world today.

Banksy’s career as a street artist took off in the 2000s when his distinctive stencilled artworks started appearing in prominent cities such as New York, Paris, and London.

Themed against the establishment, his creations quickly turned him into a kind of prophet for the subaltern. Through simple motifs and drawings such as Girl with Balloon, Banksy has been able to drive home messages against war, capitalism, corruption, and authoritarianism.

One of his most famous murals shows a wealthy man offering a bone to a dog while holding a saw in the other hand. The three-legged dog indicates the brutality of the man on the helpless and starving being.

The mural was interpreted as Banksy’s criticism of the French establishment as it was painted at Paris’ Rue Victor Cousin, a site famous for clashes between student protesters and the French government.

Other than artworks, Banksy is also known for his elaborate projects such as Dismaland, which opened in 2015 and closed the same year. The installation at Weston-super-Mare, England, evoked a sense of a theme park in desolation and was described by Banksy as “a family attraction that acknowledges inequality and impending catastrophe.”

Another acclaimed project by Banksy is the Walled Off Hotel, which opened in Bethlehem in 2017 and faces the wall that Israel built to block off the West Bank.

Owing to his brilliant works, Banksy’s artworks have fetched millions at auctions.

From Love is in the Bin to Laugh Now, here are 10 of the most expensive artworks by Banksy.

Love is in the Bin

Sold by Sotheby’s London, Love is in the Bin is the partly shredded version of Girl with Balloon painting. It is Banksy’s most expensive physical artwork sold at an auction.

When Girl with Balloon sold for USD 1.4 million in October 2018, a shredder hidden in the frame was switched on immediately after the gavel fell, and half the painting went through the shredder. This incident made headlines across the globe and shocked the art world.

The owner of the shredded painting sold the work — renamed Love is in the Bin — for GBP 16 million (approx USD 25.4 million) at Sotheby’s Contemporary Art Sale on 14 October 2021. The lot was expected to sell for an amount between GBP 4 million to GBP 6 million (approx USD 5.5 million and 8.3 million).

Adding the buyer’s premium, the price came to GBP 18,582,000 (approx USD 29.5 million). The auction price of Love is in the Bin is thus the highest paid for a Banksy artwork.

Before its sale, the Banksy artwork had been on permanent loan to Germany’s Staatsgalerie Stuttgart museum since March 2019.

Banksy donated Game Changer to the Southampton General Hospital in Southampton, Hampshire, England, in May 2020 as a tribute to healthcare workers.

The artwork, a black-and-white sketch, depicts a boy playing with a doll dressed in the Red Cross uniform. The doll’s cape and iconography represented healthcare workers as real superheroes for their work during the pandemic. In the same frame, fictional superheroes, such as Batman and Spider-Man, can be seen dumped in a bin next to him.

The artwork was eventually sold at GBP 14,400,000 (approx USD 23 million) at Christie’s in London on 23 March 2021 to become the second most expensive Banksy artworks sold at auctions. Adding the buyer’s premium, the auction house realised GBP 16,758,000 for Game Changer.

For close to two years before Game Changer, this satirical depiction of the UK’s House of Commons was the most expensive artwork Banksy had created.

Known as Devolved Parliament, the painting shows chimpanzees taking the place of politicians and observers in the UK lower house. The chimps can be seen attending the proceeding quietly, which is not expected of primates. Instead, they are sitting and debating with one standing for a talk just like their human counterparts do in the real world.

Measuring 4 metres in width, it is the second-largest known canvas by the world-famous street artist.

The 2009 classical oil-on-canvas painting was not expected to fetch more than GBP 2 million when it was put up for auction. However, when on 3 October 2019 the gavel fell at Sotheby’s Post War and Contemporary Art Evening Sale and the buyer’s premium was added, the painting realised GBP 9,879,500 (approx USD 12.2 million) for the auction house.

After the sale, Banksy wrote on Instagram: “Record price for a Banksy painting set at auction tonight. Shame I didn’t still own it.”

The post also carried a quote by art critic Robert Hughes, part of which read: “But the price of a work of art is now part of its function, its new job is to sit on the wall and get more expensive. Instead of being the common property of humankind the way a book is, art becomes the particular property of someone who can afford it.”

Love is in the Air

Love is in the Air is an artwork depicting a protester about to throw a bouquet instead of a molotov cocktail that was auctioned on 12 May 2021 at Sotheby’s in New York. But other than being the Banksy artwork on sale, it made the news for a different reason.

Eventually, the painting was sold at GBP 9.2 million (USD 12.9 million), with Sotheby’s confirming that payment had been made in crypto.

The expected price on the higher side of Love is in the Air was USD 5 million.

Show me the Monet

Banksy’s Show me the Monet is a visual depiction of the damage caused to the environment by mega corporations.

Considered one of the most thought-provoking artworks by the contemporary street artist, the painting went under the hammer at Sotheby’s Contemporary Art Evening Auction in London on 21 October 2020.

The oil-on-canvas is hailed as one of the most defining paintings by Banksy. In it, the artist adopts Monet’s painting of the Japanese footbridge at Giverny’s water garden and goes on to redefine it to express environmental damage. Viewers, thus, see the beauty of the landscape rudely interrupted by an orange traffic cone and a shopping trolley floating in the water.

The painting was created in 2005 and displayed at Crude Oils: A Gallery of Re-mixed Masterpieces, Vandalism and Vermin — Banksy’s own exhibition — the same year.

At the auction, the painting was sold for GBP 7,551,600 (approx USD 9.8 million), including the buyer’s premium. At the time, it was the second-most expensive Banksy artwork sold.

Forgive Us Our Trespassing

Measuring 7 metres in height, Forgive Us Our Trespassing is the largest known canvas by the world-famous contemporary street artist.

Created in 2011, the Banksy painting reflects on the lives of street artists who are often accused of defiling personal properties such as walls of buildings. The painting suggests that the work of street artists only makes the surroundings more beautiful.

Forgive Us Our Trespassing is based on Banksy’s own work of the same name from 2010 drawn in Salt Lake City, Utah. It has the image of a young street graffiti artist kneeling in prayer with a halo around his head.

For the reworked and much larger version, over 100 students at the City of Angels School participated in the project that aimed to motivate children to take up art.

Auctioned for GBP 4,582,500 (approx USD 6.3 million) at Christie’s in London on 30 June 2021, the artwork is a Banksy ‘intervention’ on a version of a famous 1890 oil painting of Mount Rainier National Park by Albert Bierstadt.

At a corner of the painting, which depicts a beautiful vista of the national park with the mountain towering at a distance, Banksy has added an asterisk with a text reading: “subject to availability for a limited period only.”

The ‘conditions apply’ style of the text was Banksy’s way of telling the world that the idyllic landscape will one day disappear because of climate change and global warming.

The painting first appeared in 2009 at the artist’s Bristol Museum & Art Gallery exhibition.

Another expensive artwork by Banksy, Sale Ends Today, depicts a group of people dressed in habit, praying fervently to a sign that reads “Sale Ends Today”. It was the artist’s satire on the modern consumerist society, where people are willing to go to any length to grab their most cherished products.

Interestingly, a Banksy artwork that spoke against the rampant consumerist culture itself became one of the most expensive by the artist. It went under the hammer at Christie’s in Hong Kong on 24 May 2021 for HKD 47,050,000 (GBP 4.3 million/USD 6 million).

The oil-on-canvas artwork was created in 2006 and displayed at Banksy’s Barely Legal exhibition in Los Angeles, US, the same year.

The two-metre-long painting is a parody of the famous 1991 photograph of a heavily pregnant Demi Moore taken by Annie Leibovitz. It was featured on the cover of Vanity Fair.

In his 2006 parodied version, Banksy replaces Moore’s face with a monkey face and black wig, with a cigarette between the lips.

Originally made as a commissioned work for the Ocean Rooms nightclub on Morley Street in Brighton, Laugh Now was released in multiple signed and unsigned prints in 2003.

The one sold at Sotheby’s in London on 29 June 2021 was a signed Laugh Now spray paint on metal. Like others that are part of the series, the artwork depicts a monkey with a sad expression wearing a sandwich board with the text “Laugh now, but one day we’ll be in charge” written on it.

Laugh Now was sold for GBP 2,435,000. The auction house had also announced prior to the sale that it will accept Bitcoin or Ether as payment besides Pound Sterling.