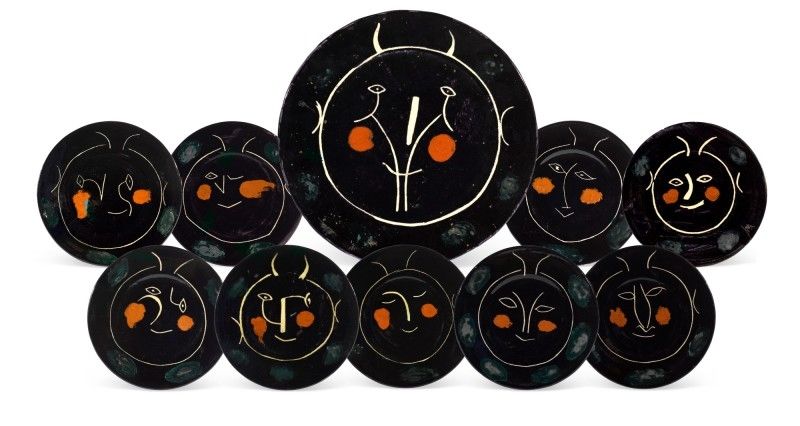 Legendary artist Pablo Picasso is best known as a pioneer of cubism, but he was also a prolific ceramicist. He started creating ceramics in 1946 after visiting an exhibition of local crafts in the Côte d’Azur area of France, where he met ceramicist and head of the family-run Madoura pottery Suzanne Ramié.

Following this inspiring encounter, the Spanish master spent the next 25 years producing more than 3,500 ceramic designs, including plates, vases, dishes, tiles and pitchers. Extensive research and experimentation led Picasso to adopt two main production methods, one based on the replication of an original object by hand and the other with hand-shaped dry moulds.

Tomorrow, Sotheby’s London will auction off an eclectic collection of ceramics and drawings that resided with him during his entire life. The online sale, titled “Picasso Ceramics: Colours of the Côte d’Azur,” offers a unique selection of works that reflect the artist’s lifelong experimentation with different ceramic techniques. Prior to the sale, these ceramics had been residing in the private collection of Picasso’s granddaughter Marina Picasso.

Why is the art-buying set getting younger than ever?
Pursuits

While his ceramics are now offered at Sotheby’s London, Picasso’s paper works are currently on view at London’s Royal Academy of Arts until April 13. Titled “Picasso and Paper”, the exhibition brings together over 300 works on paper spanning the artist’s 80-year career, including rarely-seen masterpieces that are presented alongside closely related paintings and sculptures.