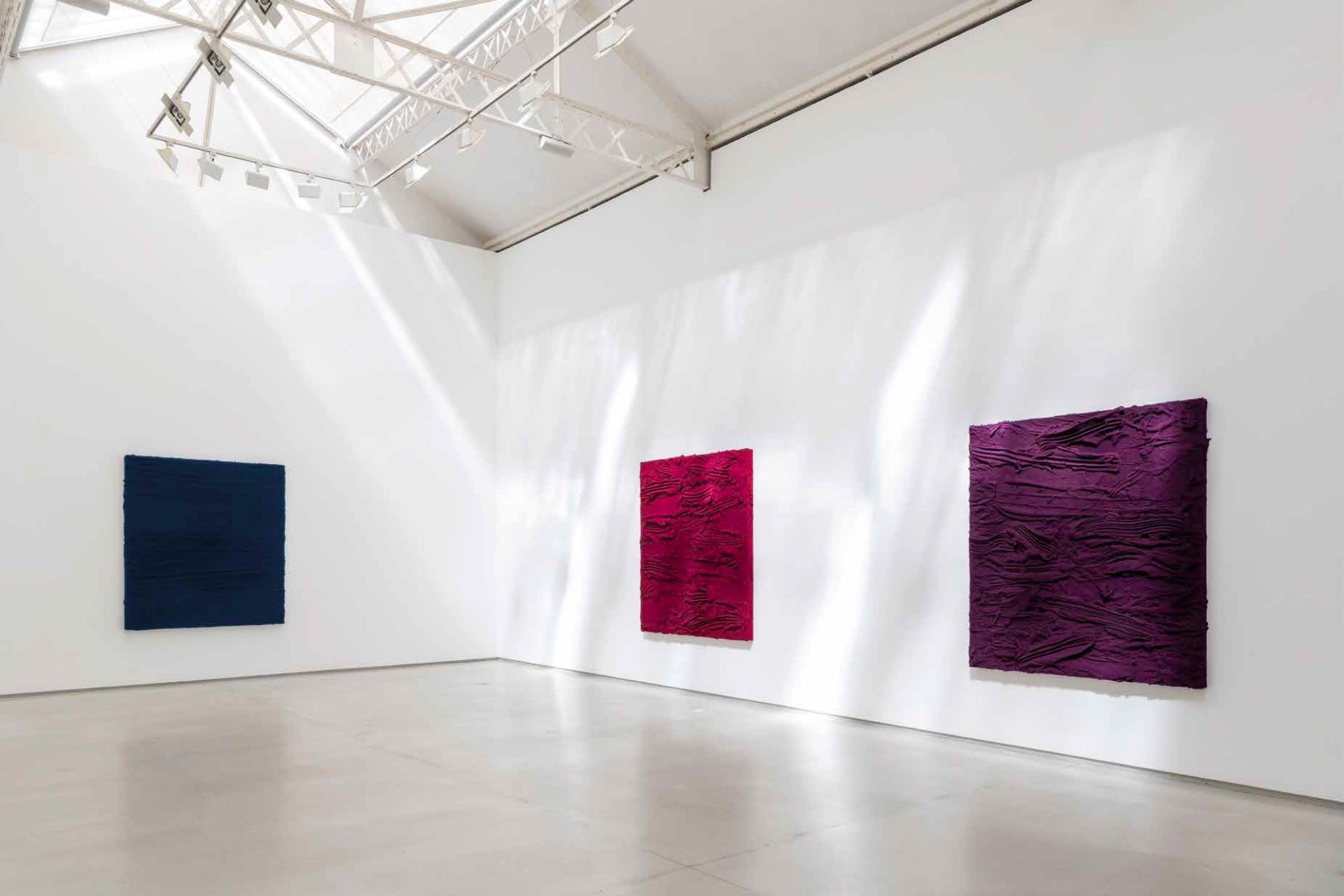 While Jason Martin has chosen paint and pigments to express his creativity, his approach to the production of his art is more akin to a contemporary dancer moving across a canvas. In another life, the British artist might have been a choreographer.

SEE ALSO: Hans Tan is Singapore’s Designer of the Year who cannot draw

For over 25 years, Martin has been primarily interested in exploring the materiality of paint and the physical action of painting, and sees his painting “as a choreography or series of movements that can never be danced again quite the same way”. Although his works are abstract, they can also be described as painted landscapes, as they take viewers on a journey of the artist’s continuous movements frozen in time and space.

His aim, he says, is in furthering the possibilities within the tradition of abstraction, to find “new approaches emptying out more familiar notions of how to paint and developing a reduced and essential personalised language”.

His style has evolved over the years, but he remains mostly known for large monochromatic artworks laden with oil or acrylic gel that have been richly textured with the help of comb-like brushes or cardboard pieces that he uses to move the paint.

The artist came to the attention of a wider public through the now legendary group exhibition Sensation at the Royal Academy of Arts in London in 1997. It marked the birth of the term Young British Artists and YBA has since become a trademark of innovative British art. “He has an extraordinary feeling of materiality, structure and monochromatic colour which is deeply anchored in the modernist tradition of painting, with its appreciation of processual, performative and gestural aspects,” remarks Thaddaeus Ropac of Galerie Thaddaeus Ropac.

Martin’s dynamic movements — at times slow and sweeping, at others swift with abrupt halts — are the main subject of his works and he describes the composition as “uninterrupted in a series of movements, and understanding that choreography is unlocking the painting”.

“I believe the most interesting abstraction has a source of figuration and my approach is that there is a warmth in figuration that I try to bring to the movement,”Jason Martin says.

Trained as a painter at the Chelsea College of Arts and Goldsmiths, University of London, Martin says he was influenced early on by a work of the American abstract painter Robert Ryman, a series of white stripes painted with a very large brush that he saw at the Tate Modern gallery. “This work showed a combination of brush marks with the suggestion that they were seamless, that there was an uninterrupted movement, a single sweep. I started to wonder how I could elaborate on that and take it further, creating a single brush mark,” he recalls.

Jason Martin started using large brushes, adapting them to his own needs, bending them, breaking them up and reassembling them using a variety of materials, “basically whatever I found in the studio that would deliver some new extension to my movement,” he says.

His technique requires him to work rapidly, as oil will harden after a period in which case “you can’t move around at the speed or the pace where you are going to get the result you want.” Because his work is very physical, he also needs a surface strong enough to “punish” without worrying about damaging the canvas. Aluminium, stainless steel or Perspex is thus used as a support. “I wouldn’t be able to achieve the same effect if I used canvas.”

Jason Martin has always been interested in pushing the limits of his materials. Having first worked with oil on a wall, he progressed to his studio floor, layering buckets of acrylic paste on his support and then moulding the thick surface with his hands or tools, in effect “sculpting” his paintings and transforming the paste into performative volume.

SEE ALSO: Cherin Sim on what it means to professionally paint on designer bags

Only after letting the rugged landscapes dry for a month would he choose the pure pigment colour he then sprayed in layers to bring out the desired colour saturation. The lengthy process gives the works a mineral texture that accentuates the mounds, ridges and crevasses he created. The artist notes that while the oils tend to reflect light, pigments absorb it, creating a different visual experience.

Jason Martin continued his exploration of 2D perspectives and began to solidify his thick impasto marks in a series of small casts (nickel, copper, bronze) in the manner of traditional 3D bronze sculptures or statues. The cast creates the impression “that the material has come together almost in an uninterrupted time and movement, but the quality of how that flat ground meets the edge is what creates that illusion”. The small formats pose no less challenging demands than works on a large scale, he adds, as they are more intensive and critically precise to create.

After a self-imposed 3-year hiatus from oil painting, during which he focused on mixed media, Jason Martin has returned to oil using a more minimalist gesture, aiming to reduce brush strokes to the least. Instead of large brushes he opted for hand-held brushes again. This helped him reconnect with the raw aspect of painting.

Next March, Martin will present the result of a recent residency at the STPI — Creative Workshop & Gallery, where he developed a series of works using paper casts, pulp and dry point. “The experimental nature of the workshop afforded me a freedom to explore materials in exciting new ways. The exhibition will hopefully reveal surprises in how materials can be transformative,” he says. “The works as a whole endeavour to hold some mysteries questioning the nature of their materials and how they have come into being.”

“If my overall studio practice can be understood as developing a pictorial language, my collaboration with STPI takes me on an R&D tour of the grammar inherent to that language,” he concludes.