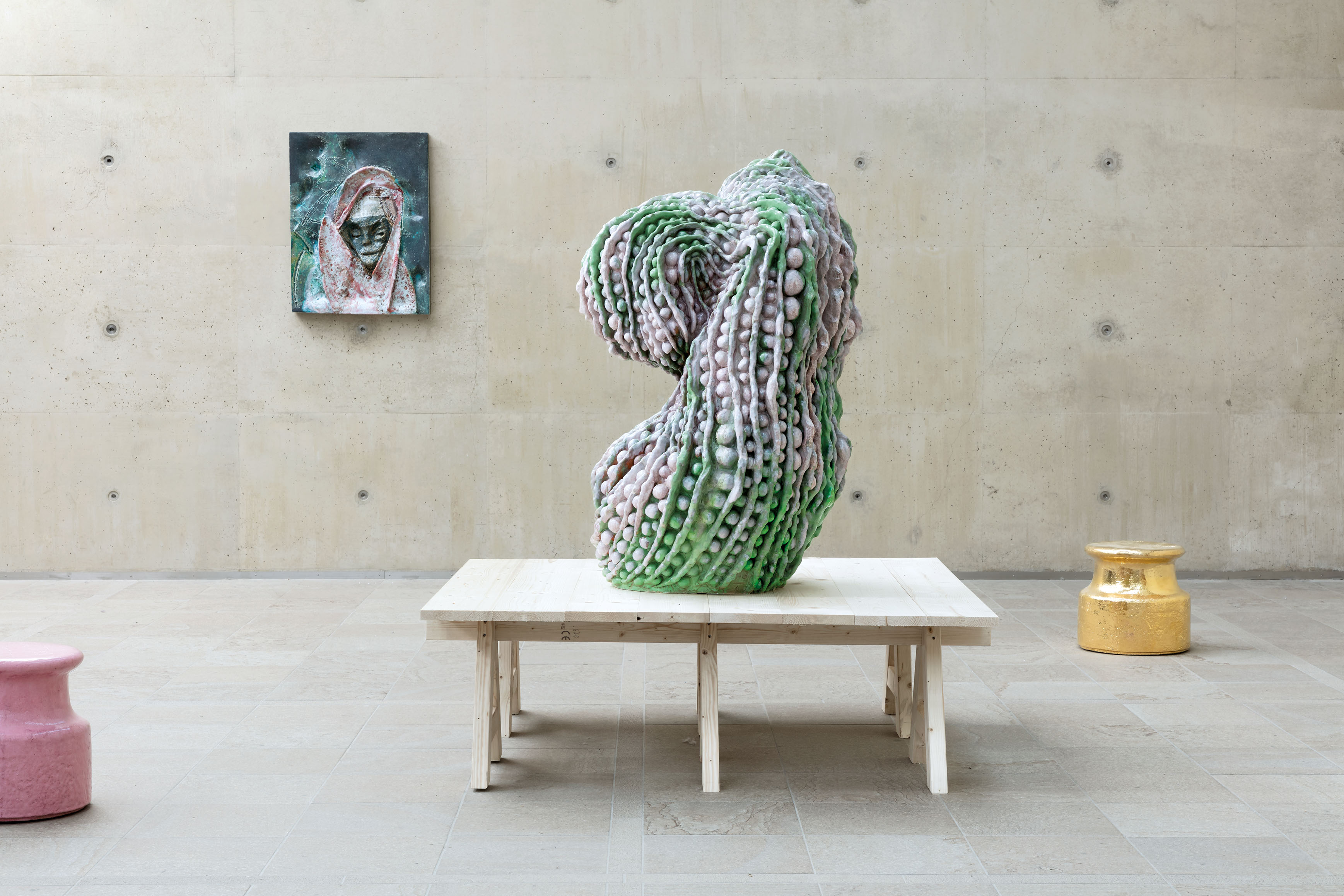 Visiting the Parisian home of Belgian artist Johan Creten, which overlooks the garden of the Musée Picasso, is like walking into a veritable cabinet of curiosities.

You’ll discover a collector with an encyclopaedic knowledge of classical antiquity, art history, opera, literature and poetry, who can converse for hours about his treasure trove of art, antiques and books, in particular the Renaissance and baroque bronzes he’d acquired at auction or at flea markets.

Creten’s initiation into art, history and beauty can largely be attributed to his weekly visits as a child to an elderly antiquarian couple, the Leonards, who instilled in him a lifelong love for historical objets d’art.

Hence for his latest exhibition Naked Roots — at Museum Beelden aan Zee in The Hague, the Netherlands, which runs until September 23 — he is offering glimpses into his universe. He’s selected for the first time nine ancient objects from his private art collection to show alongside more than 40 of his ceramic, bronze and resin sculptures, as a demonstration of the influence of historical art on contemporary art.

For example, a 20th-century Hopi Indian rain sash — a handwoven strip of cotton with balls representing clouds and hanging cords to signify falling rain that was worn by brides as a fertility symbol at weddings — finds association with the sexual nature of the hanging fruit clusters in Creten’s bronze Why does Strange Fruit Always Look So Sweet? (named for the Billie Holiday hit). Also an anti-racist statement, he created the piece after coming down with fever and hallucinating in the Mexican desert, during which his mind related the dangling sweet dates of a date palm to the swollen glands in his neck.

The theme of sexuality is also present in Génie, a provocative female torso swathed in roses spewing up from a phallic base. Both La Femmina, in glazed terracotta with flowers sprouting from a column shaped like a woman’s lower body, and the 5-metre-tall The Herring, which portrays a woman whose nudity is hidden behind a fish, can be compared to Eve in the Garden of Eden or to a 16th-century bronze Venus from the Girolamo Campagna workshop, holding the golden apple of discord she received for winning the beauty contest judged by Prince Paris of Troy.

Audiences must look below the surface to uncover hidden meanings about the story of man and the human condition. “To use beauty to talk about very serious subjects on a secondary level is very important to me,” Johan Creten notes. “These hidden stories can be social, political or sexual, and these pieces open up slowly if you take the time to look at them from different angles.”

His works are shape-shifters in terms of form, medium and meaning, depending on the viewing angle, light or context. Take, for instance, his stoneware Odore di Femmina — La Rafale, with the famous Sèvres blue glaze and crystallisations. It is part of a series of female torsos that are covered in individually crafted ceramic petals and evoke female sexual organs or a bed of mussels that are fragile yet razor-sharp and simultaneously trigger feelings of attraction and repulsion.

Born in 1963 in Sint-Truiden, Belgium, to a middle-class family, Johan Creten saw art as an escape from the narrow-mindedness of provincial life. In the 1980s, he studied painting at the Royal Academy of Fine Arts in Ghent, but as a non-conformist gravitated to the school’s unpopular ceramics atelier, where he discovered clay. A damp, dirty, sensual and lowly material looked down upon in the fine art world, it immediately spoke to him.

“Clay is a very loaded material because it’s the earth we walk on,” Johan Creten says. “In a lot of cultures, it’s called Mother Earth. It’s sacred but at the same time it’s the poorest of materials.”

He studied sculpture at the National School of Fine Arts in Paris, before becoming an artistic nomad, often as an artist-in-residence, going from one studio to another through Amsterdam, The Hague, Rome, Nice, Sèvres, Sète, Monterrey, Arizona, Wisconsin, Oakland and Miami — working with the local clays and glazes.

Fearless and flying in the face of convention, Johan Creten has always broken the rules. His clay sculptures reveal different skins, determined by the glazes used, which crawl, shiver, blister, drip and scar, and can be rough and messy — “forbidden” in classical ceramics. With its ambiguous references striking at subjects others consider taboo, his oeuvre has at times engendered controversy.

“Clay is a very loaded material because it’s the earth we walk on… In a lot of cultures, it’s called Mother Earth. It’s sacred but at the same time it’s the poorest of materials.” — Johan Creten

Perhaps the most controversial in recent years is his bat-shaped bronze De Vleermuis fountain, which incited protests before its installation in front of the burnt remains of the Broerekerk church in Bolsward, the Netherlands. It was part of a project where 11 artists created fountains for cities in the northern Dutch province of Friesland. Bats may symbolise wealth, prosperity, luck and longevity in Asian cultures, but in the West, they are often associated with the night, underworld and sinister forces.

“There’s been hate mail, terrible articles and petitions,” he remarks. “It’s been a battle for almost four years, but now that it exists, people are really starting to love it. People who had signed a petition against my fountain came to my show’s opening here because a new world has opened up to them.”

Its form is rich in iconography, taking influence from Francesco Fanelli’s Saint George and the Dragon (1640) bronze sculpture of St George on horseback slaying the dragon — symbolic of victory of good over evil — for its preliminary stoneware studies and resin master model. Johan Creten also built a staircase into the bat’s back so visitors could climb up and metaphorically vanquish the animal.

“I don’t make lots of pieces for the public space, but I loved making this. Maybe I’ll make more public sculptures, but not if I have to put water in my wine. I want to make the work that I want to make, and that was a big lesson from Bolsward: You have to stick to what you want to do and not listen to others,” he says.

While the exhibition title references recurring themes in Creten’s work such as origin, and the place of the individual in history and interpersonal relations, it also reveals insights into his life.

Mon Petit Nègre (My Little Nigger), with its politically incorrect title, was his first-ever bronze. A replica of a ceramic piece whose casting his father had offered to pay for, it has lived next to his father’s pond for years and developed a striking blue patina. “My father says this is a sculpture that carries the weight of the world at his place,” he reveals. “It’s a sculpture about suffering. The humanity of a lot of these sculptures is important to me.”

Johan Creten explains why he is highlighting both his historical collection as well as a large cross-section of his oeuvre: “I could have done a show here with seven pieces that would look stunning, but I prefer to show 50…because each piece has a different problem or story.”

Included in the exhibition is an ivory sculpture of Saint Sebastian from 1500, his hands tied behind his back and holes in his body where he was shot with arrows because of his faith. Now banned due to poaching and illegal trafficking, ivory was often used to make religious objects because it was a sacred and valuable material.

Johan Creten feels we have a duty to protect our cultural heritage. Some antique objects, like a half-destroyed South Arabian alabaster head with eyes that stare back at visitors, are mere fragments but hold incredible visual power and still can evoke strong emotions. Radiating strength and possibly used in shamanic rituals, a tiny headless Inuit torso in walrus ivory from the Bering Strait’s Okvik culture is engraved with geometric lines that denote tattoo motifs. These are reflected in the symmetrical lines of three golden oval wall pieces in glazed stoneware, Glory-Okvik I, II and III, which also suggest a beetle carapace.

Creten’s greatest achievements are elevating ceramics from the status of craft to fine art and bringing bronze back into fashion. This has helped pave the way for younger artists. He was among the first to eliminate boundaries between sculpture and ceramics, choosing to make his name as an artist instead of a ceramicist and exhibiting in art galleries and museums.

“In Europe, when I started as a young artist, ceramics in art was considered taboo,” he recalls. “It was something for women or for applied arts, and you couldn’t make a sculpture using ceramics because that wasn’t done, so for years I was in a very difficult position, because nobody wanted to show my work.”

“I’ve always only accepted shows that were about sculpture; the fact that it was clay was something extra. But in the last 10 years, there’s been a lot of change: Lots of young artists are using ceramics now.”