On the Greek island of Mykonos, a jewelry store has been transformed by creative agency Saint of Athens into a 1960s swimming pool.

The delightfully vintage, pastel blue look of the place has got fans of the American director Wes Anderson, known for his taste for symmetry and impeccable choice of colours, commenting on the aesthetic. From the outside, the Gavello boutique looks like any other typical shop in the Cyclades, according to its founder. But once inside, customers are transported into a vintage atmosphere. In order to transform the store into a “60s luxury pool,” the Saint of Athens design agency in collaboration with Dive Architects used baby blue tiles in addition to other details such as the lockers, ladder and coat hooks. “We were looking for an unorthodox way to present the colourful and opulent Gavello designs, so we came up with a surreal, summery idea,” Nikos Paleologos, founder of Saint of Athens, told Deezen, which spotted the gem. “Cosmopolitan and picturesque places like Mykonos tend to trap themselves in a dipole of rigid tradition versus forced extravagance. But Mykonos is a cosmopolitan place that calls for big and bold moves,” he outlined to the publication. “Soft blue, a colour reminiscent of urban pool luxury of the 60s, furniture made from metal, vintage elements and custom blue terrazzo displays constitute a retro yet modern, Wes Anderson kind of universe,” noted Paleologos, in reference to the filmmaker, a master of symmetry.

At the back of the store, a bench and a set of red lockers add to the trompe l’oeil effect. A feeling reinforced by the inlaid round lights that surround the store, reminiscent of swimming pool lighting. 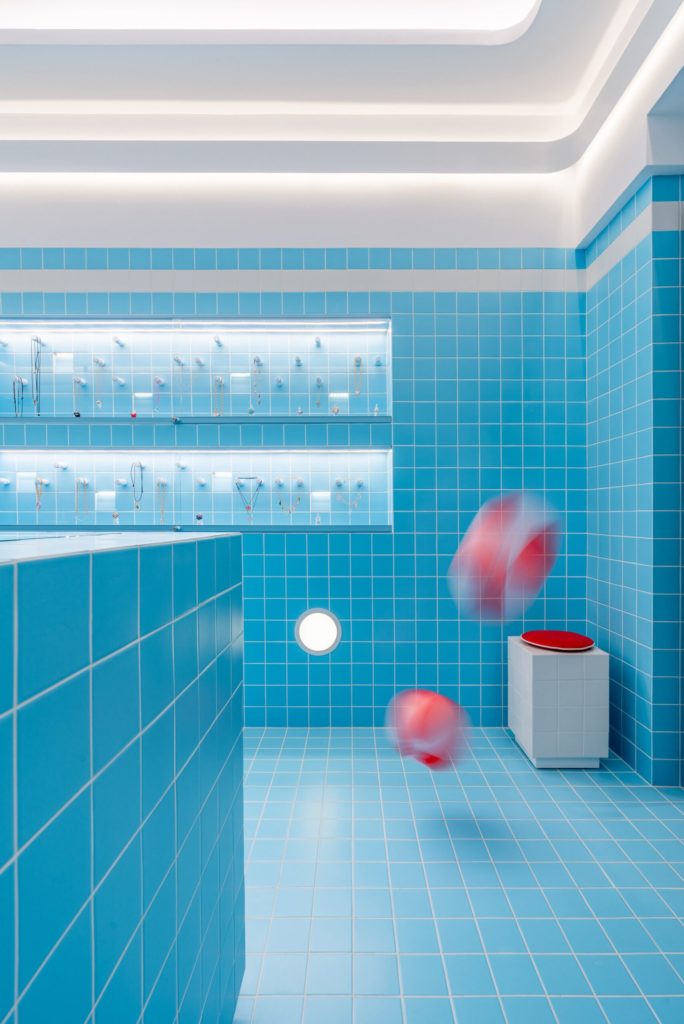 To meet the practical requirements of the jewellery brand, mirrors, cushions and display cases were placed throughout the space. Pegs, which resemble those where you put your towel, are also used as jewelry holders.

This story was published via AFP.