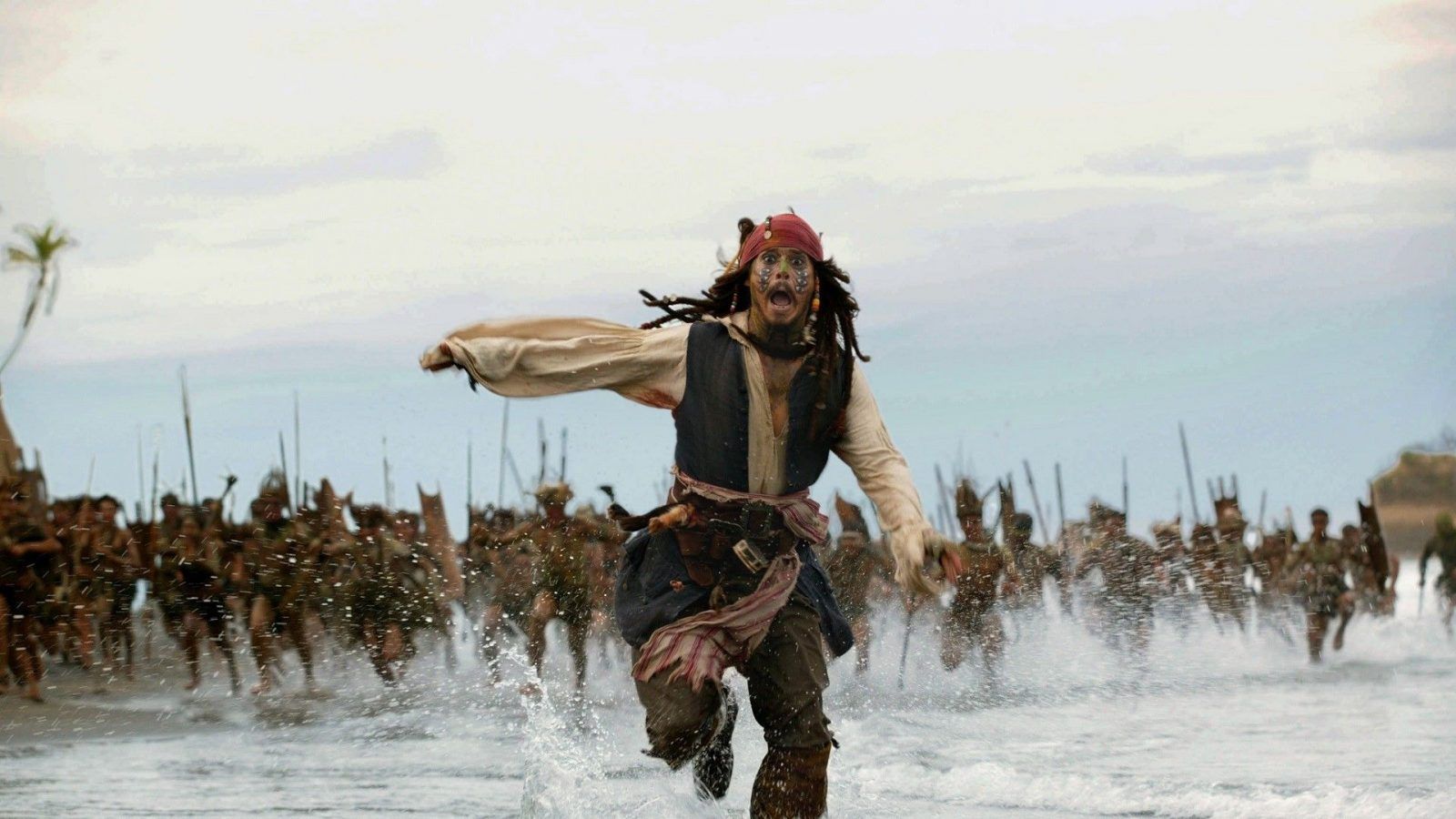 When it comes to performance, few can be as methodical as Johnny Depp. The actor goes deep into the skin of the characters he plays and gets everything from mannerisms to dialogue delivery, down to a tee. But what leaves audiences amazed are Depp’s movie transformations, which are some of the best in cinematic history.

The ever-changing faces of Johnny Depp

Extremely inventive with his roles and deeply committed to performance, Depp is known to himself take part in make-up and costume design processes of the characters he essays on screen.

Most of the films, in which he has played characters in drastically unusual getups, have been directed by Tim Burton. Make-up artist Joel Harlow and costume designer Colleen Atwood, both of whom are Oscar winners, have been frequently associated with Depp, in creating some of the most memorable movie transformations the actor is known for.

Here are some of the best Johnny Depp movie transformations

Johnny Depp had already become a star by the time Pirates of the Caribbean: The Curse of the Black Pearl (2003), the first film in the series, was released. However, he turned into an internationally bankable superstar with the success of this film.

Jack Sparrow is counted among one of the most memorable characters in movie history. This is because of Depp’s outstanding performance as the extremely witty and sometimes self-centred pirate lord, who spoke with a distinctive drawl.

The credit also goes to his make-up and costume. He got his beard braided and wore a long hair wig held by a bandana. His heavy kohl-lined eyes and stained teeth contributed to the perfect appearance of a pirate who roamed around the hot and humid Caribbean in the 18th century.

It is said that Depp was inspired by The Rolling Stones guitarist Keith Richards for the look.

With such fine acting and an unforgettable appearance, Depp won an Oscar nod for Best Actor in a Leading Role for The Curse of the Black Pearl.

Edward Scissorhands marks one of the most amazing roles played by Johnny Depp, as the titular character.

Edward is a humanoid who has scissors for his hands. Though he tries to help people by creating ice sculptures and trimming their hedges, he is hindered by his appearance when it comes to expressing his love for Kim (Winona Ryder).

Depp effortlessly brought out the pain of the character, fated to a life of loneliness, on screen. Besides his performance, critics and fans also applauded the amazing make-up work that made the actor almost unrecognisable.

Make-up artists Stan Winston and Ve Neill used prosthetics and skin-tight suits to help Depp get into the skin of the character, quite literally. For their work, the two were nominated for an Academy Award for Best Make-up.

The film didn’t do well at the Box Office and was also a critical failure, but The Lone Ranger remains one of Johnny Depp’s best movie transformations because of his nearly unidentifiable makeover.

Depp, who is part Cherokee and Creek Indian from his great-grandmother’s side, played Tonto, a Comanche warrior, who helps a Texas ranger take down a dangerous outlaw gang.

In the film, Tonto wears white paint on his face with dark lines drawn on it. The most noticeable aspect of the look was a crow placed on his head.

Depp got the inspiration for the look from a painting titled I am Crow by artist Kirby Sattler.

“The stripes down the face and across the eyes … it seemed to me like you could almost see the separate sections of the individual, if you know what I mean,” he told Entertainment Weekly in a 2012 interview.

Joel Harlow, who worked on Depp’s appearance, said that the movie has more make-up than he ever did before. Even more prosthetics were needed to make Depp look really aged for some scenes.

The film received two Oscar nods, one of which was for Best Achievement in Makeup and Hairstyling for Harlow and Gloria Pasqua Casny.

In the film, Todd is a barber in mid-19th century London, who is imprisoned for a crime he didn’t commit. Upon release, he restarts his trade as a barber and becomes a serial killer in order to avenge the murder of his wife.

Describing the character in a 2008 interview with Daily Mail, Depp said that Todd “makes Sid Vicious look like an innocent paper boy.”

“But Tim says he saw him as a very tragic guy, although he didn’t set out to glorify a serial killer. He saw him as just a very sad character. Sweeney Todd becomes obsessed with that dream of revenge and that becomes a compulsive obsession, a madness,” Depp said.

This explains why he wore heavy white make-up and had his eyes blackened. It was to portray a mix of sadness and death on the face of the character. His hair, too, bore a smudge of white colouring.

Sweeney Todd was one of the most amazing roles played by Johnny Depp. It earned him an Academy Award nomination for Best Performance by an Actor in a Leading Role. Colleen Atwood, who worked on the costumes, received a nomination for Best Achievement in Costume Design.

Lots of make-up, some prosthetics and a great deal of CGI went into Johnny Depp’s transformation into the famous fictional character, created by Lewis Carroll.

Costume designer Colleen Atwood, hairstylist Terry Baliel and make-up artists Valli O’Reilly and Patty York were involved in the creation of the character, for the screen.

In an interview with New York Post in 2010, York said that there were six colours were used in Mad Hatter’s eyes.

“Johnny did a little watercolor rendition of how he saw his character, and the make-up grew from there,” York said. “His character suffers from mercury poisoning — on one eye I used lavenders and purples, and on the other I used turquoise and light blue and dark blue, and there’s a little touch of green in there.”

Atwood said that the costume that Depp wore was loosely based on the 1860s’ style, to make it seem closer to the period when the book by Carroll was written.

“Johnny and I and Tim (Burton) all sort of did a little bit of research about hat makers and what their life was like in that era,” Atwood said.

Undoubtedly, Mad Hatter remains one of the best movie transformations in his career. Atwood received the Academy Award for Best Achievement in Costume Design.

Most of Depp’s finest movie transformations have been in those directed by Tim Burton, owing to the latter’s film-making techniques and the stories he chooses to tell.

In the comedy-horror Dark Shadows, Depp plays the vampire Barnabas Collins, who must protect his descendants from the machinations of the witch named Angelique Bouchard (Eva Green), who was responsible for his condition.

For the vampire look, Depp put on white make-up for a distinctive pallor. Prosthetics were used to create his pointy ears, nose bridge and fingers. Of note was the character’s more modern hairstyle with jagged bangs.

Thus, when Depp signed up to essay the famous character in the 2005 movie adaptation, he had an uphill task. Yet, he made it one of his best on-screen avatars. Today, fans fondly remember both his performance and his appearance, as much as they do that of Wilder.

For this purpose, Depp carved a unique appearance for himself with the help of the make-up team and the costume department.

He got a bob, white powder on the face and wore lavender contact lenses. Of note was the fake teeth that added to the eeriness of his character. Depp also wanted to add a prosthetic nose, but Burton shot down the idea.

Depp eventually revealed the inspiration for his character on The Ellen DeGeneres Show in 2012.

“Certain ingredients you add to these characters – Willy Wonka, for example, I imagined what George Bush would be like… incredibly stoned, and thus was born my Willy Wonka,” he said.

Of course, his performance was outstanding. No wonder Charlie and the Chocolate Factory was both a critical and commercial success.

In one of his famous villainous roles, Depp appeared as the malevolent wizard Gellert Grindelwald in this sequel to Fantastic Beasts and Where to Find Them (2016).

As the greatest dark wizard of the Wizarding World till the arrival of Lord Voldemort, Grindelwald is truly a force of unimaginable evil. He shares a secret with Albus Dumbledore and harbours a deep resentment towards muggles or people without magical powers.

Like some of his previous works, Johnny Depp was involved in the character transformation process. He cut and dyed his hair platinum and wore coloured contact lens in one eye that helped bring out the menacing look of the powerful dark wizard.

Commenting on why he chose to give Grindelwald the singular eye distinction, Depp told Entertainment Weekly in 2018 that it was a “character choice.”

“I saw Grindelwald as more than one, if you know what I mean. I almost felt like he’s maybe two people. He’s twins in one body. So a gamey eye is more like the other side of him. Sort of like a brain for each eye, an albino twin, and he’s somewhere in the middle,” he said.

Depp further described the character as “a human version of Finnegans Wake”, the novel by James Joyce, which, according to the actor, “begins and ends in the middle of a sentence.”

Black Mass is noted for being one of Johnny Depp’s most unrecognisable makeovers. Playing the real-life Boston crime boss in the film, Depp undertook a drastic change in his appearance, making himself look more aged and partially bald.

Make-up artist Joel Harlow, who has been behind some of Depp’s iconic in-film appearances, used prosthetics to turn Depp into “half Johnny and half Whitey.”

“From the middle of [Depp’s] face up is entirely prosthetic,” he told Boston magazine in 2015.

Harlow said that the thinning hairline look that Depp’s character carried was achieved by punching individual hair strands, one by one into a prosthetic. There were 45 forehead pieces that were used and each needed 22 hours for fixing the hair strands.

On Depp’s suggestion, the eye colour was changed to blue, using contacts. It took about two hours for the make-up routine to turn Johnny Depp into James Bulger. All the hard work was perhaps truly remarkable as according to Harlow, “some people couldn’t look at [Depp] because he looked so much like Whitey.”

Additionally, the film did well both at the Box Office and with the critics.

The film marks one of Johnny Depp’s best movie transformations. Wearing a fedora and a zoot suit, he played a human ‘Big Bad Wolf’ in the film based on the 1986 Broadway musical of the same name.

Into the Woods has several prominent characters from children’s fairy tales, including Little Red Riding Hood. As the story goes, Depp’s Big Bad Wolf is presented as a threat to Hood and her grandmother.

Speaking to Huffington Post in 2014, director Rob Marshall said that Depp was “very inspired by the wolf of the cartoons of Tex Avery from the ’40s, where the wolf is dressed in a zoot suit and a fedora, and it’s like a wolf in sheep’s clothing.”

For this reason, costume designer Colleen Atwood revealed to The Hollywood Reporter in 2014 that the character’s dress was designed like the “late 30s kind of fairy tale illustrations.”

The film earned Atwood an Oscar nomination for Best Achievement in Costume Design.