Fealty for the Royalty 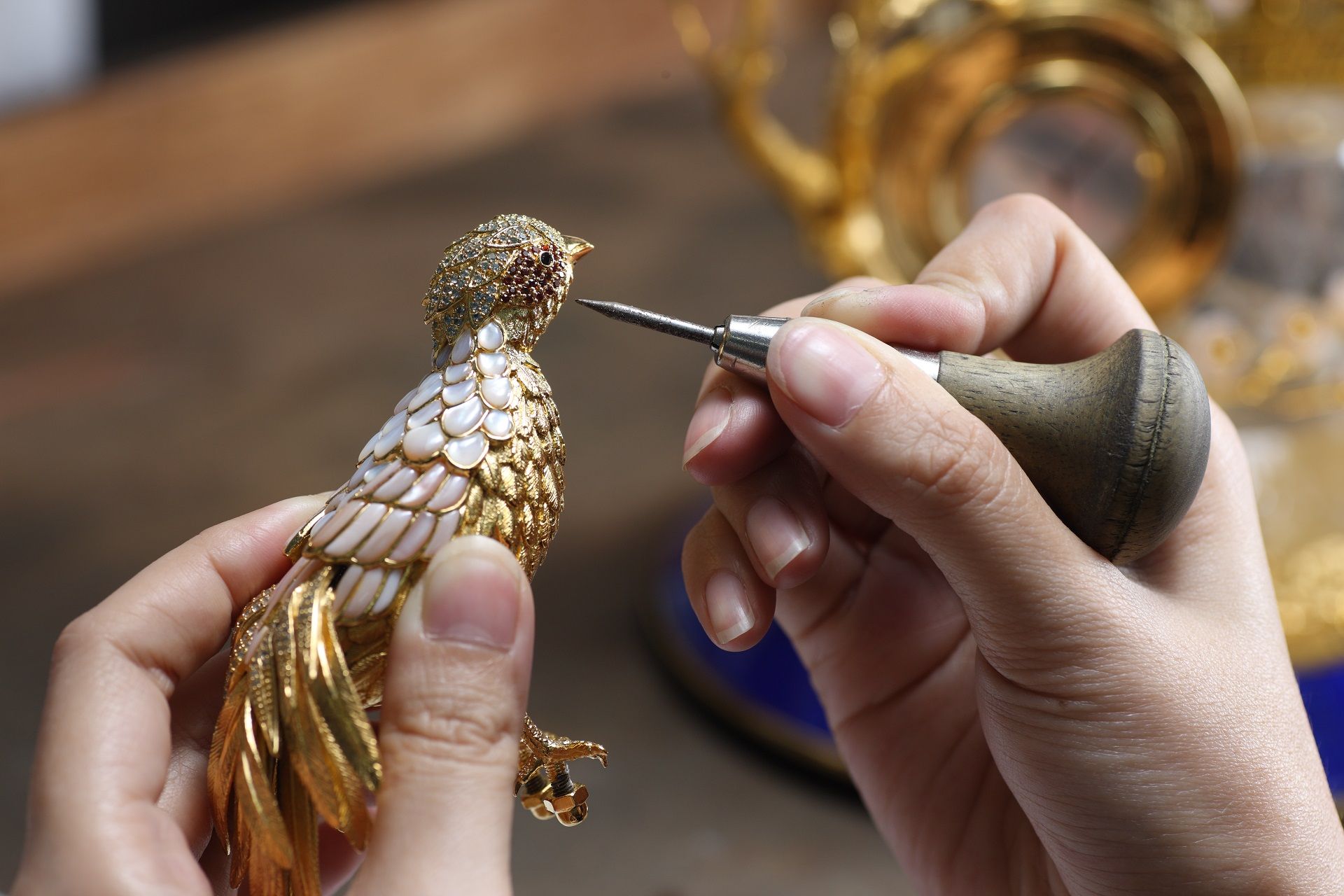 Royal Insignia founder Ivan Hoe, with his close to 30 years of experience and his prolific team of craftsmen and artisans, has garnered a steady clientele of the highest honour, designing and manufacturing orders, decorations and medals for royal families and international ministries on this side of the world.

Some of their most remarkable masterpieces include the Sultan Ibrahim Johor Medal embossed with a portrait of the Sultan of Johor Ibrahim III with intertwined sprigs of gambier and pepper plant, to commemorate His Majesty’s coronation in 2015; as well as the Sultan Azlan Shah Silver Jubilee decoration of sterling silver and purple enamel detailing, honouring the 25-year reign of the Sultan of Perak.

Besides commissions for such monumental ceremonies in history, the Singapore-based atelier has also taken up the responsibility of designing and crafting items for another celebratory occasion that is just as important: royal weddings. Their most recent clientele was that of the Royal Johor family, when on August 14, the Sultan of Johor’s only daughter, Princess Tunku Tun Aminah Sultan Ibrahim wed her Dutch fiancé Dannis Muhammad, the semi-professional footballer turned marketing manager for the Tampines Rovers Football Club.

Compared to the time-honoured orders, decorations and medals, royal weddings come as a new challenge for Royal Insignia, as not only do they have to honour the exacting royal protocol for the traditional sobriety of a royal wedding, but to marry it with aesthetics of the 21st century and the ever-changing modernisations to come.

Royal Insignia shares with us exclusive testimonials on the creative and production process behind an illustrious wedding for the royals and affluent families alike.

What would you say distinguishes a royal wedding from that of a commoner through the perspective of an atelier like Royal Insignia?
We had the honour of designing and crafting for a good many royal weddings, alongside weddings for very wealthy families over the years, and one word sets the two classes apart: bespoke. Every meticulous aspect of the wedding is personalised, and the reason why this is so is because for these affluent families, everything used during the wedding becomes part of the family’s heritage. The items are preserved and used to educate future generations on the family’s history. We have been commissioned to design and craft everything from wedding invites, traditional ceremonial items, wedding jewellery, and wedding favours, to the dinner service used during the wedding dinner, such as bone china plates, silverware, and linen. Once, we were to design and craft the hantaran items for a wedding, whereby the wedding couple commissioned for a replica of every item to be made in sterling silver for display in the family’s private gallery after the ceremonious wedding.

What is one of the most challenging royal wedding gifts Royal Insignia has ever crafted?
It would undoubtedly have to be the commission for the Crown Prince Al-Muhtadee Billah of Brunei Darussalam, back in 9 September 2004, whose wedding with the Crown Princess Sarah was acknowledged as one of the most extravagant celebrations of the decade. His Royal Highness requested for a wedding gift an elaborate egg made out of rock crystal that opens up to portraits of the happy couple in the encasement. The block of rock crystal, also known as “pure quartz”, weighed at least 20kg, and it was enormously fragile in contrast; one wrong placement of the chisel could shatter the entire crystal! Our hardstone carvers spent endless hours reducing the walls of the egg to merely 10 millimetres.

What challenges do the Royal Insignia craftsmen encounter when designing and crafting for these royal and affluent families?
One of the greatest challenges would be the sheer number of people involved during the preparation for the wedding itself. Compared to a commoner’s wedding, not only are the couple’s parents involved more extensively in the planning and preparation of the wedding, for royal weddings, the royal council has to be consulted as well to ensure that traditions are being adhered to. The challenge, especially during these modern times, lies in balancing the wishes of the couple with that of the other parties concerned, especially when the older relatives may be more focused on the traditions.

How would you say Royal Insignia go about ironing out the differences between the modern and the traditional, so that things can be met on the middle ground for families with centuries-old heritage?
We are proud to say what Royal Insignia does best is in understanding the heritage and the tradition, and giving them a modern yet timeless interpretation. One of the best examples that we can share despite the confidentiality of our clientele is one many years back for a very lovely bride we shall call “B”. It was a privilege for us to work with B, who loves modern and minimalistic designs. B adores cupcakes, and it was her wish that each guest brings home a bejewelled bowl shaped like a cupcake at the end of the wedding. Our designers created two exquisite designs for B: one was gilded in gold and decorated with tiny pearls and red semi-precious stones, whereas the second bowl was in a cool shade of blue with black pearls and white faceted stones. B loved the designs, but her parents, not so much. The gifts were to be distributed to their VVIP and VIP guests, and it was important for the family’s traditional motifs to be emblazoned prominently across the gifts. This difference between the bride and her family was the source of many uncomfortable and tense meetings to come. With only one month to the wedding day, a time when tension was at its peak due to the still unresolved differences, our designers came up with the brilliant idea. We stylised the “cupcakes” with what would seem at first glance to be dainty flowers, but only upon closer study, one would distinguish that the way the flowers’ curve formed the family’s ancestral motifs. B and her mother loved the designs, so much so that they had the cupcake bowl repurposed into a trinket box for their jewellery, which now sits on their dressing table in their family villa when we last visited.

Where do the craftsmen and artisans go to look for inspiration for weddings of such prominence?
Like how our experience with B has demonstrated, weddings are more than just a celebration of love for the affluent; they are also a display of the family’s rich heritage. Prior to working on any designs, we have a special team of researchers who will study the couple and their family trees in detail. Through this research process, we hope to uncover stories, colours, motifs or symbols that are unique to the couple and their families. These stories and symbols will then be incorporated into the design of the wedding items. A long-time customer once commissioned Royal Insignia to design a wedding gift for his daughter’s special day. His wife had passed on while his daughter was still young, and the daughter did not have the privilege of having her mother present at her wedding to celebrate her entering this new chapter of her life – something many may take for granted. Through extensive and excessive research, our designers managed to salvage a very old piece of lace from her mother’s wedding veil, and we replicated the lace pattern with semi-precious cabochon stones across a rock crystal picture frame. On the happiest day of her life, the bride would have a reminder of her mother’s own happiest day, and could take that small part of her mother with her as she starts her new life. As gift makers, these are the moments that we live for: moments when a carefully-thought-out gift can capture memories believed to have been lost through time, express forgotten emotions, and bring its recipient insurmountable joy.