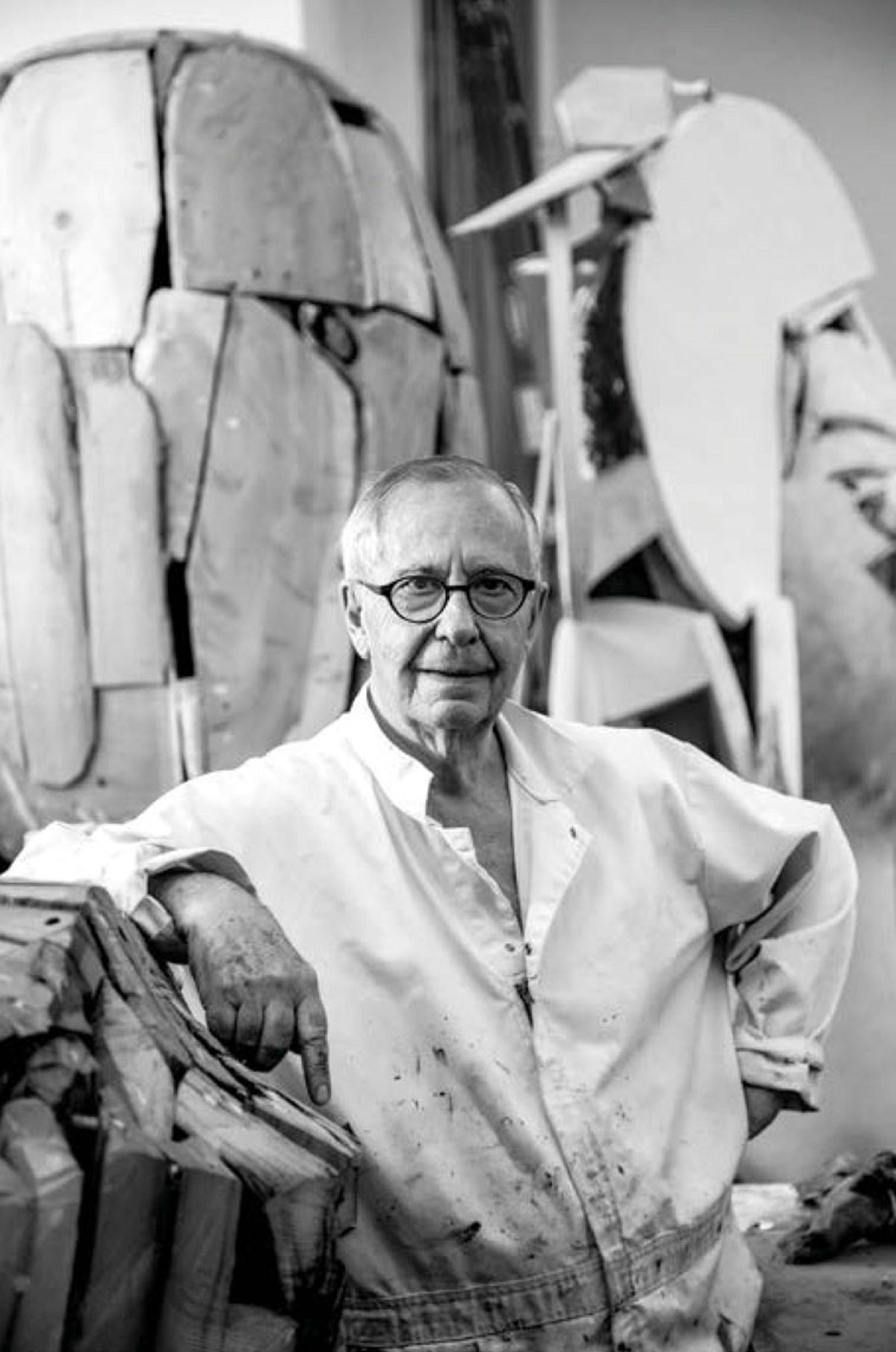 It was Campbell’s soup for Andy Warhol, balloon sculptures for Jeff Koons, and spotted pumpkins for Yayoi Kusama. But for Manolo Valdés, it’s all in the head. The Valencian has made a name for himself reinterpreting the human face through various techniques — paintings, mixed-media collages; wood, stainless steel, aluminium or bronze sculptures — producing works that often tower between two and five metres. The medium varies but the essence stays the same: An expressionless face stares straight ahead, a blank space is exposed to scrutiny and imagination.

Ten bronze meninas (Spanish for ‘girls’) and eight massive sculptures on Orchard Road, along with paintings and collages, were presented by the Opera Gallery Singapore a month ago for the Manolo Valdés’ first major showcase in Asia. The exhibition followed more than 60 solo presentations of Valdés’s pieces; most notably, Place Vendôme hosted his 16-ft-tall La Pamela, a featureless figure topped with a colossal sunhat, last September. (It can also be seen outside Valencia’s Ciutat de les Arts i les Ciències until December 10.)

Borrowing from the Spanish painting tradition, pop art and material art, Manolo Valdés often draws on 17th-century Spanish court painter Diego Velázquez and his portraits of Margaret Theresa of Spain (which also inspired Pablo Picasso’s Las Meninas series of 58 paintings). But paying tribute to European art history isn’t Valdés’s only reason to keep to the theme of heads and faces. “It’s difficult for me to paint a landscape or a person,” the 75-year-old says through his wife, Rosa, who’s also his interpreter. “I’m interested mainly in materials and matter — I must create something for which the materials are dominant; the subject is an excuse.”

Whether it’s reductionist portraits composed of multicoloured paint or heads cast in brass or stainless steel and crowned with fronds, orchids or butterflies, a sense of unity pervades his oeuvre. “The product is totally different, even with the same subject,” the 2007 Officier de L’Ordre National du Mérite of France recipient explains. Nothing sold at conventional art supply stores interests him; instead, reused paper, wood salvaged from discarded pallets, paint he formulates with linseed oil and powder pigments, slivers of mirrors intentionally shattered, and even previous works he’s taken apart and scrapped, offer limitless possibilities. “It’s easier for me to use materials that are unconventional, then I get inspired to use them in an unconventional way,” he says. Living in New York, where he’s been based since 1990, also makes everything easier to find. “Or maybe materials look for me!” he laughs.

Valdés’s art might look haphazardly put together, but every choice is deliberate and meticulous. Collages take at least a week and sculptures at least four months, though some projects have taken up to five years to complete. Some concepts remain just that, or as maquettes or true-to-size cardboard or plastic foam models, relegated to a corner in his studio until new inspiration strikes. “Experience has taught me not to destroy [models] immediately, because you can find a solution [in time]. [Deciding whether to cast a sculpture is] mostly a feeling, based on experience, like how in everyday life you may think, “When do you like a person? When are you in love?” It is both rational and irrational.”

Trained as a painter at the Fine Arts Academy of San Carlos in Valencia since 15, Valdés was inspired by the sociopolitical climate in Francisco Franco–ruled Spain. In 1964, he formed Equipo Crónica with fellow artists Rafael Solbes and Juan Antonio Toledo. The group criticised the military dictatorship through its pop art techniques, and dissolved in 1981.

These days, Manolo Valdés backs away from reproducing Equipo Crónica’s style of charged artwork. “Today I’m more skeptical, I don’t think that by making art or being an artist it’s possible to influence the world sociopolitically. When someone makes a statement in painting or sculpture, he is renouncing the richness of art.”

He now looks to nature and from his home next to Central Park, where he first got the idea of butterfly halos for his sculptures after spotting a sunbather with magnificent monarchs swirling about him. So what’s next? “An artist is like a hunter,” he says. “I’m always looking, trying to find something [fresh].”