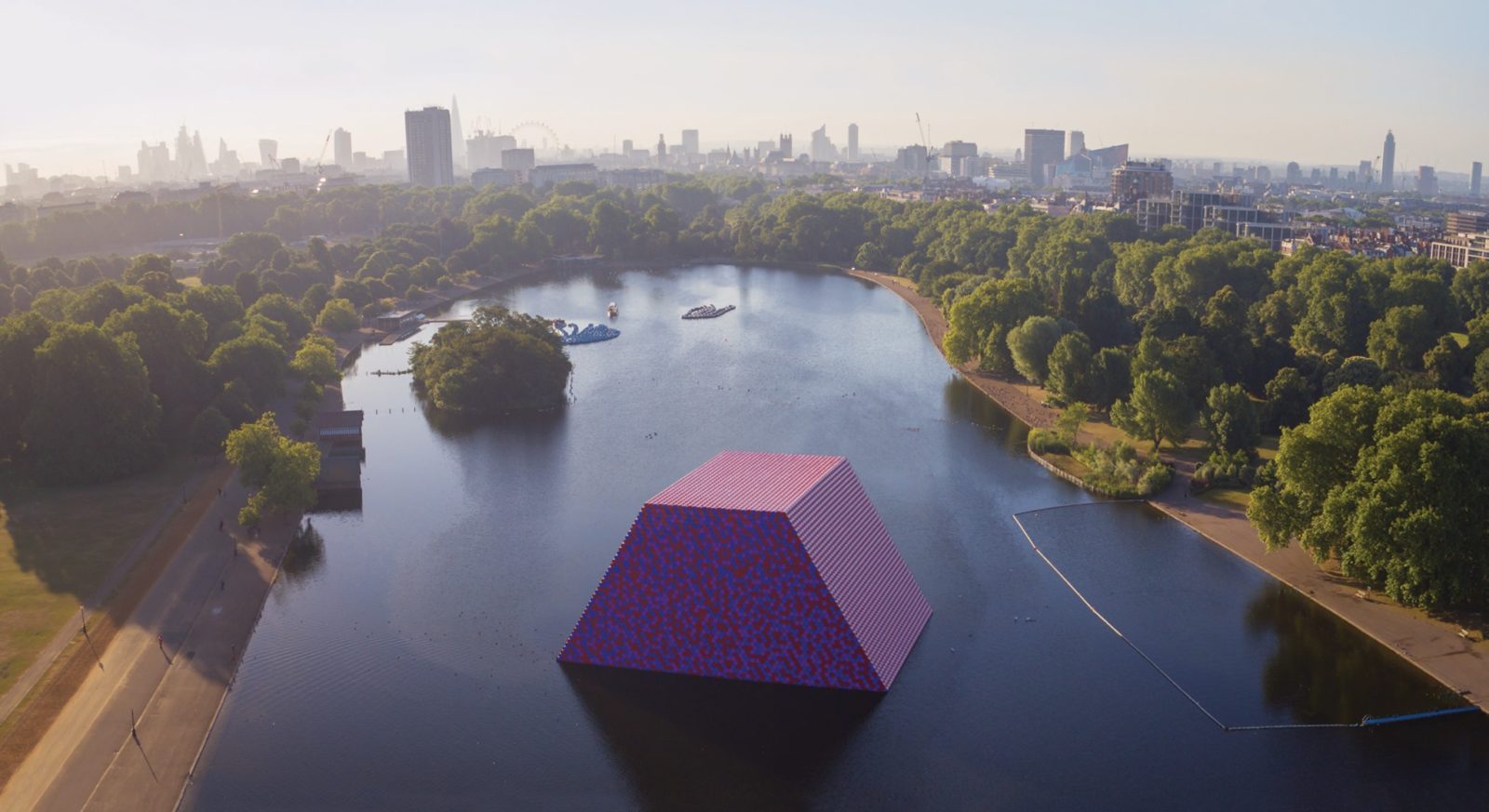 Pursuits
AR art: Create your own museum at home with Acute Art app
Share
Next article

While most people’s first experiences of AR today are likely to be in gaming and entertainment, this technology is now taking the art market by storm through various star-dubbed initiatives.

Have you ever dreamed of owning a monumental sculpture by the late Christo? Serpentine Galleries and Acute Art are now paying tribute to the late Bulgarian-born artist by bringing back to life his final large-scale public artwork, “The London Mastaba,” in augmented reality.

For three months in 2018, the monumental sculpture was installed on top of the Serpentine Lake in London’s Hyde Park, where passersby could admire 7,506 pink and purple barrels that Christo stacked on a floating platform.

Accessible via the free Acute Art app, “The London Mastaba AR (Hyde Park)” offers art enthusiasts the opportunity to discover an exact virtual replica of the installation through their mobile phones when they visit the Serpentine Lake.

While this site-specific initiative has been designed to be used in London’s Hyde Park, VR and AR production house Acute Art has announced that it is currently working on a version that art aficionados can use at home, or wherever they are.

“The democratising power of new immersive media will bring Christo and Jeanne-Claude’s unique artistic vision to wide and diverse audiences across the globe,” Daniel Birnbaum, artistic director at Acute Art, said in a statement.

“Wunderkammer” (or “Cabinet of Curiosities” in German) allows tech-savvy art enthusiasts to project realistic-looking sculptures of animals, objects and weather phenomenons into their homes.

Some of the digital objects included in “Wunderkammer” are particularly interactive, as light sculptures and objects are invisible to the eye until the user “catches” them with their hand.

Most AR collectibles in Eliasson’s latest project are free to collect, although a few are offered for around $3 for a 30-day period.

While Acute Art CEO Jacob De Geer said that his company “was founded on the vision of democratising art and bringing it to places where it could not be before,” there is huge potential for the commercialisation of AR artworks.

New Jersey-born street artist KAWS put this theory to the test in March with an ambitious AR project, which encompassed a public exhibition and the drop of two AR sculpture editions of his trademark “Companion” that are available for purchase on Acute Art’s app.

Collectors could acquire a piece of the project in various ways, including as an edition of 25 nearly six-foot-tall AR sculptures that were available to buy together for $10,000 on the company’s website.

Owners are able to place, capture, and document these AR works, collectively named “COMPANION (EXPANDED),” at different locations using the Acute Art app. More surprisingly, they can keep the AR sculptures private, or make them publicly available for anyone who has downloaded the app.

Although less expensive than some pieces by KAWS on the market, these AR works can also be swapped and re-sold on the app for a price of the owner’s choosing. Acute Art has announced that a 30 percent commission will be tacked on, split equally between the seller and the buyer.

Art lovers on a budget could also purchase another collectible by KAWS, which takes the form of an open edition of 1.5-foot-tall AR sculptures that are available in three colours, and can be purchased on the app for a period of seven or 30 days at a time.

These “AT THIS TIME (EXPANDED)” artworks were sold at various price points, with one sculpture being on offer at $6.99 for seven days, and all three sculptures available for $29.99 for 30 days.

“When I realised the quality that could be achieved and experienced in AR, I was immediately drawn to its potential. I have been creating objects and exhibiting works in public spaces throughout my career, and this allows me to expand on that in a whole new arena. The possibilities of locations and scale are endless, and I’m excited to start a new dialogue in this medium,” KAWS said of the successful initiative in a statement.