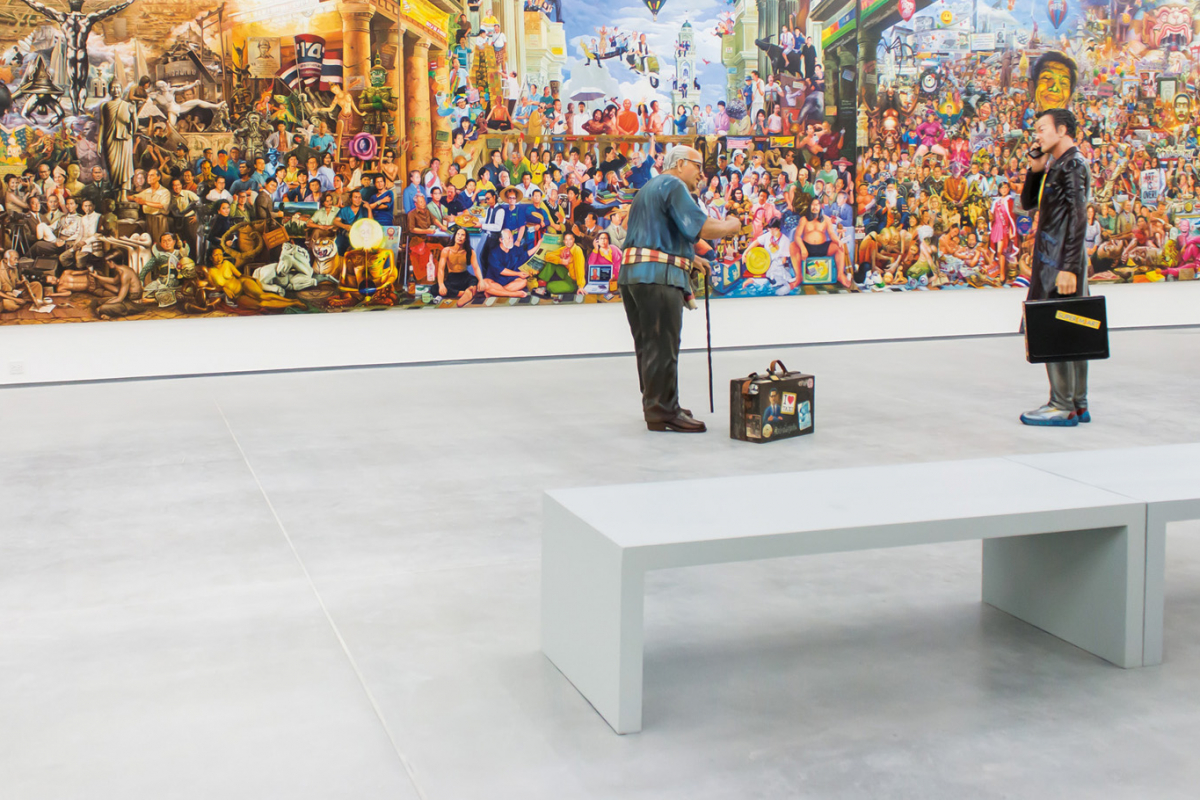 Opened in July 2016, this 3,000-sqm private museum was co-founded by Thai contemporary art collectors Eric Bunnag Booth, his late mother Patsri Bunnag and her husband Jean-Michel Beurdeley, as a showcase for part of their 600-strong artwork collection, which includes seminal works by different generations of contemporary artists, from the late conceptual artist Montien Boonma, often regarded as the father of Thai contemporary art, to Chatchai Puipia, known for his figurative paintings, and Navin Rawanchaikul, whose Bollywood billboard-influenced creations explore his Thai-Indian identity.

“We are not presenting the history of Thai modern and contemporary art. It is a personal collection based on what makes us react emotionally. I understand that the collection is not to everyone’s taste, but the visitors seem to enjoy discovering something new and different,” Booth says, adding that his greatest satisfaction is knowing that over 60 percent of the museum’s visitors are under 35 years old, which attests to the younger generation’s interest in Thai art.

MAIIAM is part of a vibrant contemporary art scene, Booth proudly shares while pointing out that the northern Thai city has attracted artists for over 25 years. In the early 1990s, a group of young artists, including pioneering Thai contemporary artists Montien Boonma, Uthit Atimana and Mit Jai Inn, launched the Chiang Mai Social Installation project to display their artworks in open spaces as a response to the lack of gallery infrastructure. Then, in 2004, Rirkrit Tiravanija and Kamin Lertchaiprasert also settled there and set up The Land Foundation, an experimental art and community project set amid the rice fields. Other notable creatives living in Chiang Mai include Cannes Film Festival-winning artist-director Apichatpong Weerasethakul, filmmaker and videographer Araya Rasdjarmrearnsook, contemporary artists Navin Rawanchaikul and Torlarp Larpjaroensook, who owns Gallery Seescape, an alternative art venue he established 10 years ago.

But the action is not only happening in northern Thailand. As if making up for lost time, Bangkok will host two Biennales this year. The Bangkok Art Biennale runs from November 2018 to February 2019 and is supported by former acting culture minister Apinan Poshyananda and drinks magnate Thapana Sirivadhanabhakdi. Organisers are bringing in international stars the likes of Marina Abramović, Yoshitomo Nara, and Elmgreen & Dragset, along with established Thai and Southeast Asian artists such as Sakarin Krue-On, Heri Dono, and Ho Tzu Nyen. Look out also for Huang Yong Ping — he took over the Grand Palais in Paris in 2016 with a giant aluminium snake skeleton that encircled piles of containers — with a new installation at Wat Pho, one of three temples among various venues for the event.

Sirivadhanabhakdi says the Biennale represents Bangkok’s aspiration to become an important destination in the world of international contemporary art, while the event’s artistic director Poshyananda believes it will create “a new chapter” for the Thai contemporary art scene.

While the Bangkok Art Biennale is billed as the country’s first, it is preceded by the alternative, privately funded Bangkok Biennial, which happens July 7 to September 3. Organisers are taking a more guerrilla-style attitude, preferring to remain anonymous and eschew a selection committee. As its website states, “The hope is that this approach will allow Bangkok Biennial to achieve a broader, more inclusive and more diverse programme.”

Also scheduled for 2018 is the Thailand Biennale, dubbed the Krabi Art Olympics (November 2 to February  28, 2019), which is planned by the Culture Ministry and Krabi’s provincial administration. It focuses on site-specific outdoor works with the theme, “Edge of the Wonderland”.

Building on such rising interest in art, the private Sansab Museum of Contemporary Art will open in Bangkok in 2020. Thai businessman Petch Osathanugrah (CEO of Thai beverage producer Osotspa) has commissioned a young architectural firm, Supermachine Studio, to design a building for his extensive contemporary art collection, which includes works by international names such as Damien Hirst, Frank Stella, Francesco Clemente and Takashi Murakami, as well as Thai artists including Rirkrit Tiravanija, Udomsak Krisanamis, Arin Rungjang and Kawita Vatanajyankur. Beyond housing part of Petch’s permanent collection, the 10,000-sqm structure also features temporary exhibitions as well as educational programmes, with talks and workshops. A museum spokeswoman explains: “Petch sees the programming as a possibility to incubate and advance cultural understanding about contemporary art, and to encourage public engagement and create dynamism for the museum.”

Along with this flurry of private initiatives in Thailand, the commercial art scene has also slowly taken shape. Thai galleries were out in force at January’s Art Stage Singapore, which had chosen Thailand as its Special Country Focus. The Numthong Gallery presented a large-scale installation by Kamin Lertchaiprasert, No Past No Present No Future, while Richard Koh Fine Art offered a trio of new oil paintings by Natee Utarit.

“It’s about time the spotlight gets turned on Thailand. Most collectors do not realise there are more well-known Thai artists showing regularly on the international scene than [artists] from other Southeast Asian countries,” according to gallerist Richard Koh, who says the Bangkok gallery scene is becoming more vibrant with several new galleries opening recently.

“There is definitely a rising awareness of contemporary art. You see attempts to support the local art scene from different sides. The government is interested in supporting it, [as well as] the private sector with collectors and galleries,” adds Lorenzo Rudolf, founder and director of Art Stage Singapore.

Yet, some observers point out that the lack of full support and coordination from the Thai government to the contemporary art scene is hampering its development. For example, there is still no national contemporary art collection — works by important artists remain in private hands or overseas museums.

While the Bangkok Art Biennale is a good step, “infrastructure has a long way to go,” notes David Elliot, a senior curator at the Redtory Museum of Contemporary Art in Guangzhou. He is also among seven international advisers for the Biennale.

The launch of three art fairs at almost the same time underscores the lack of coordination, says artist Manit Sriwanichpoom. “It reflects the fact that the country doesn’t have a master plan in promoting art. Each institution and organisation just wants to do what it likes without cooperation. Three Biennales is an overkill.”

Manit adds, “Instead of promoting the supply side, [they should be] creating demand that Thailand needs. To have a true eco-system of art, we need to have all partners involved, from art makers to art dealers, art biennales to art fairs, private sector to governmental support. It has to be a complete circle. This situation tells us the Thai art scene doesn’t know how to work as a team. Art organisers prefer to be solo players. It’s fine for rich countries, full of resources and infrastructure, but that’s not our case.”

While Booth agrees, he takes heart that many excellent galleries have opened in recent years, never mind that there remains only a handful of contemporary art collectors to support the market. He is optimistic because he’s observed that the younger generation has become increasingly interested in collecting while a new crop of local curators is eager to learn and work: “This will help make a great difference in the local art scene. It is very exciting!”

SEE ALSO: Stephen Ng and Chang Siok Eng only buy art when both agree on it