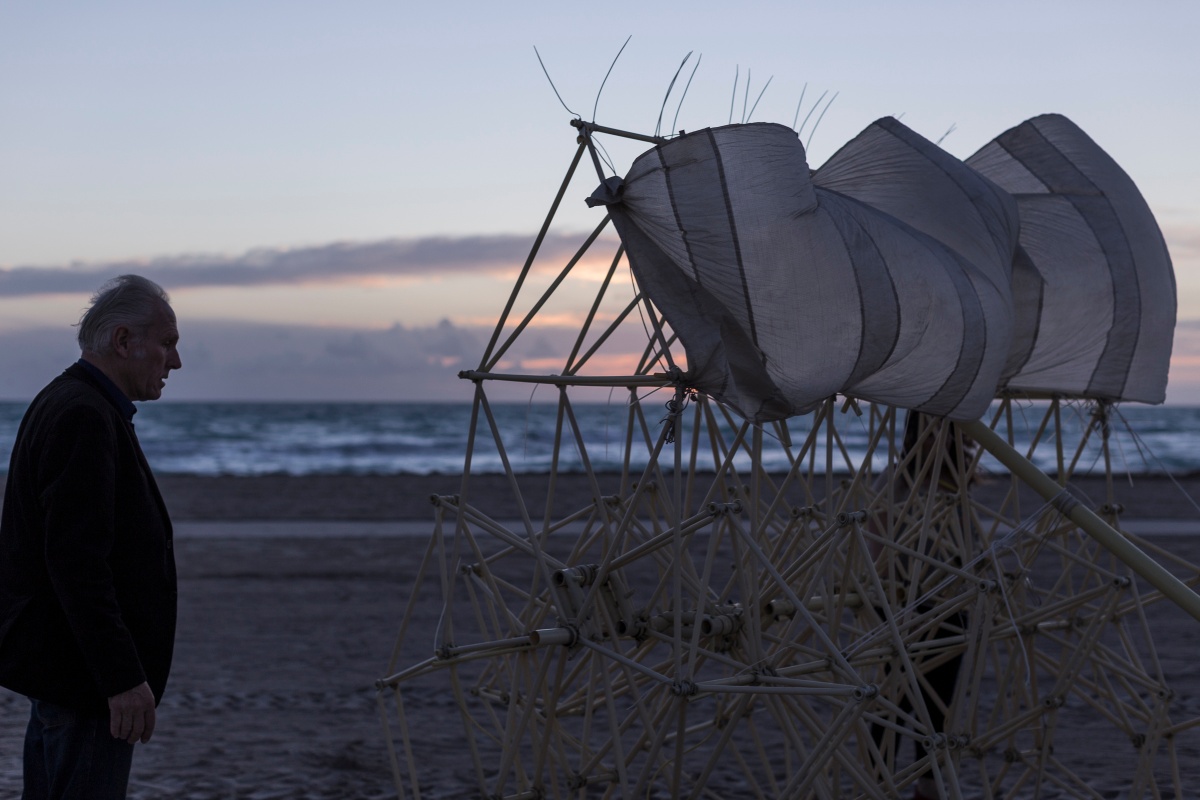 From a distance, it looks like the skeleton of a prehistoric caterpillar-like creature complete with antennae taking a stroll in Japan’s Mie Prefecture; its organic shape ambling seemingly to the vagaries of the wind. But the skeleton isn’t bone. Look closely and you find instead PVC tubes lashed together with adhesive tape and zip ties, and billowing sails for a head.

This is Animaris Mulus, the latest creation by Theo Jansen, which is being exhibited at the Mie Prefectural Art Museum until September 18.

Many describe the former landscape painter as a kinetic artist, but watching one of his wind-propelled sculptures walking unassisted — and without electronics — one might easily liken him to a mad scientist or a divine being, for breathing life into the inanimate.

Jansen, 69, calls his creations “Strandbeests” (“beach beasts” in Dutch), the first of which he birthed some 25 years ago. Among his most ardent fans is Mythbuster’s Adam Savage, who likens the sculptures to “biological organisms”. Even The Simpsons paid him what many consider as the ultimate fan tribute: Guest starring roles for Jansen and his kinetic sculptures in a recent Christmas episode.

In fact, ask the artist what is the most memorable compliment he has ever heard from a member of the public, and he self-consciously admits: “I hardly dare say it, but I’ve heard many times, ‘You have changed my life’.”

Long known among engineering types, Jansen waded into the psyche of the glamorous art-buying crowd when in 2014 he showcased a series of Strandbeests — including his largest, the 13-metre-long Animaris Suspendisse — on the golden sands of South Beach for the duration of Art Basel Miami Beach. That large-scale exhibition was organised by Swiss watchmaker Audemars Piguet (in partnership with the Peabody Essex Museum), which found kinship in Jansen’s pursuit of technical perfection and ability to break boundaries between art and engineering.

Recalling that partnership, Jansen tells Prestige: “While I have virtual Strandbeests walking in my head, I know that watchmakers have watches ticking in their heads too. We have a very similar thinking process: When I feel how in love they are with their work, it reminds me of my own love story with the Strandbeests.”

This love story marks a new chapter with the unveiling of the caterpillar-like Animaris Mulus. “Since I showed my works at Art Basel Miami Beach with Audemars Piguet, a totally new walking was developed, with many advantages: There is no more sand in the joints, they carry a lot more weight and they can walk on very rough terrain,” Jansen says of his latest work.

Always innovating, Jansen spent this summer extending the evolution of his oeuvre. “I was busy growing dunes. The strong winds brought sand (like in a sand storm) and I tried to cannibalize that sand stream into dunes, using PVC-pipe skeletons. I want to do everything mechanically…something watchmakers understand I believe!” he shares.

Meanwhile, after wrapping up in Mie, Jansen and his works will head south where a four-part exhibition will open at the Okinawa Prefectural Museum and Art Museum this October.

Sign up to get the latest luxury and lifestyle news delivered to your inbox.
ART Sculpture Audemars Piguet theo jansen
Lauren Tan

Loftus Hall is for sale, but would you buy the most haunted manor in Ireland?

In the spirit of giving back, we’re collaboratin

Here's a clear instance of an everyday design that