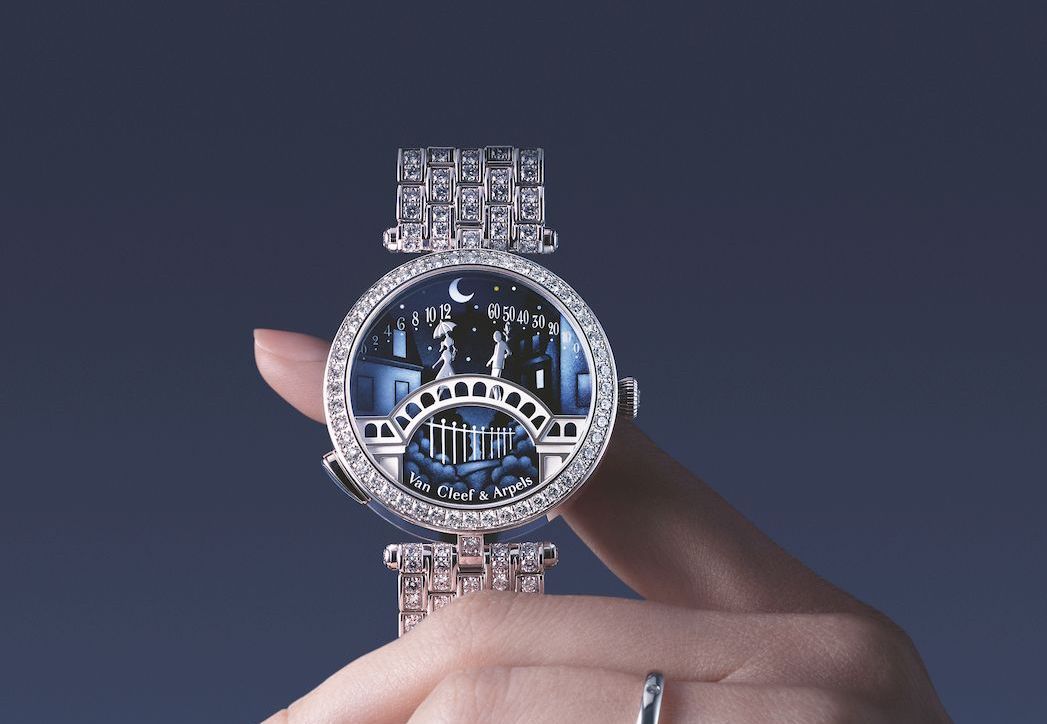 Just like how love has inspired Van Cleef & Arpels’ stunning Romeo & Juliet jewellery creations, the Poetry of Time collection also draws influence from the notions of romance, especially the Lady Arpels Pont des Amoureux watch, an iconic mainstay for Van Cleef & Arpels since 2010. The story unravels in the city of Paris, where two lovers yearn for each other’s affection. As they rush through the streets to meet, bathed under the glowing moonlight, they finally share a kiss on a bridge at the stroke of midnight as she holds an umbrella while he hides a rose behind his back as a token of love.

As Paris awakens, the lovebirds continue their search for each other, once again connecting on the bridge at noon where they kiss once more under the enchanting sky.

Almost a decade after the debut of Lady Arpels Pont des Amoureux, Van Cleef & Arpels has six new versions: A day scene (now a permanent addition to the collection), a night scene, and scenes of the four seasons.

These new versions also have an animation-on-demand module — the kiss can be re-lived at the press of a button any time.

From day to night

An elaborate scene like this cannot be brought to life without the technical skills and professional know-how.

Take for example the grisaille enamel technique. Developed in France in the 16th century, the wizardry of this execution is showcased in two different ways on the two dials. In the original version, white enamel powder is placed on a dark background, also known as blanc de Limoges. The result is a stark contrast of light and dark hues depicting the Parisian night.

For the new daytime watch, Van Cleef & Arpels has employed coloured grisaille enamel — using pink and blue enamel against a white background — for the first time to achieve a gentle quality that evokes the notion of daylight. This enamelling process takes about 30 to 40 hours, and each dial is fired for about 10 times to achieve the desired result.

But the exquisite craftsmanship doesn’t stop there. The silhouette of the bridge has been finely carved in gold, letting the structure stand out against the background with diamonds set around the dial lending it even more sparkle. The nighttime watch also comes with gold flakes that add sparkles against the dark sky, while the daytime version showcases two painted swallows flying over the city.

That’s not all. The lovebirds are also featured prominently at the back of the watches and both come fitted with interchangeable bracelets such as navy blue, purple alligator skin or paved with diamonds.

For those who prefer eye-catching bejewelled timepieces, these four jewellery watches — with diamonds and coloured stones adorning the bracelets no less — definitely steal the limelight.

The different seasons are depicted by pink flowers for Spring, while Summer is highlighted through butterflies fluttering across the streets; the beauty of Fall is represented by falling leaves and the snow-covered rooftops signify that Winter is here. The best part? The couple are also decked out in appropriate attire for the season.

Just like the daytime and nighttime versions, the dials on all four jewellery watches are decorated using the grisaille coloured enamel technique, with the flowers, butterflies, leaves and snow all given the gold carving treatment.