Who Are Alessandro Michele’s New Allies For Gucci’s Autumn/Winter 2018? 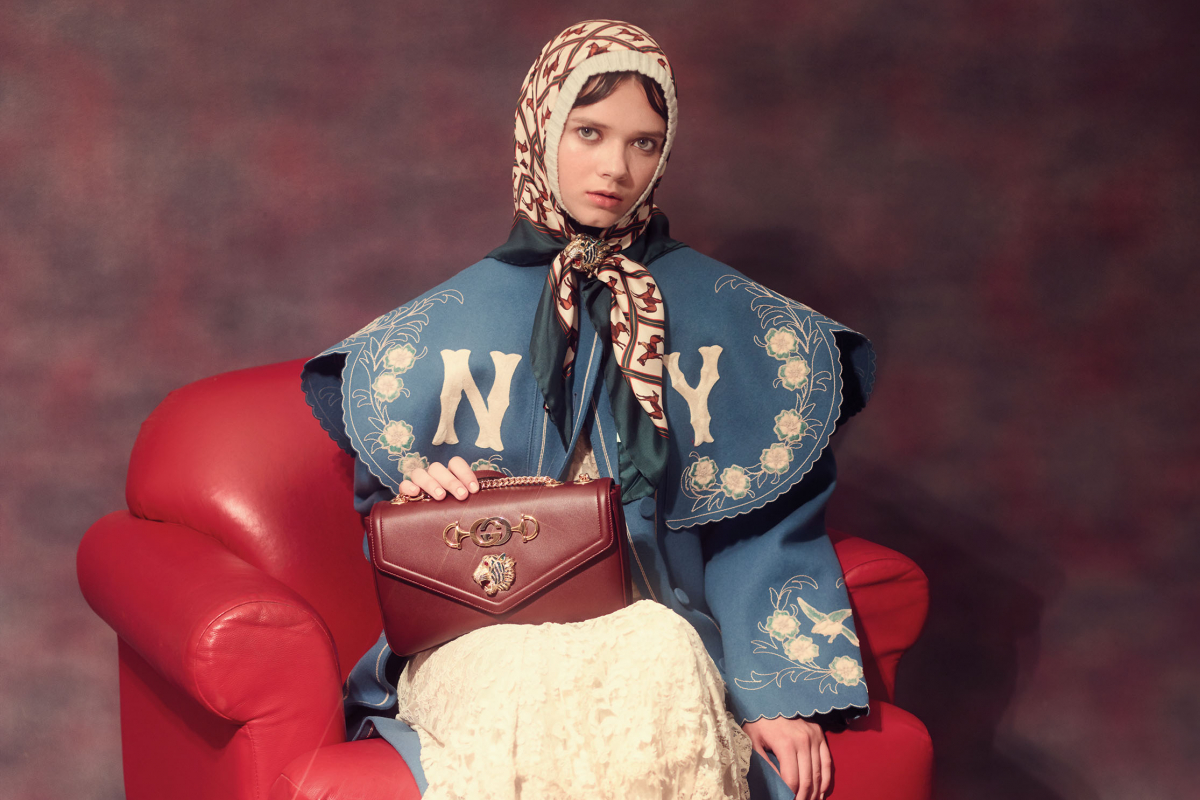 Models of no fixed identity or origin cradled a baby dragon, a chameleon and even decapitated heads (relax, they’re just Makinarium replicas!). One sported eyes on the hands, while another had a third eye on the forehead.

While the next-level spectacle that only he can conjure racked up the likes, what will ring up sales is the new roll call of collaborators the creative director — who sees his work akin to a surgeon’s — has enlisted to enable you to craft your own identity.

One more crossover from Pre-Fall 2018 is the Flashtrek lace-up shoes, Michele’s crossbreed of the mountain boot and chunky trainer.

The shoe’s tongue carries the Gucci brand in the font of Japanese multinational video game developer SEGA, which made its debut in Spring/Summer 2018.

With a wide range of hats, bags, shoes, menswear and womenswear, you can’t miss Major League Baseball‘s (MLB) presence in this collection. The collaboration with  the oldest of four major professional sports leagues in the US and Canada was first introduced on Pre-Fall’s accessories. It has been extended to ready-to-wear, making it the new collection’s most prominent partnership.

This time, the professional baseball organisation’s team logos of New York Yankees, San Francisco Giants and Los Angeles Dodgers et al have evolved from print to patches. The embroidered embellishments go against conventions to inject an unexpected sporty edge into pieces both formal and casual.

Ever the rule-breaker, Michele also proposes a unisex ensemble (above) from the traditionally male tailored-shirt-and-trousers outfit that the Gucci girl can wear too.

There’s something British in Michele’s mix too. Characterised by leather handles, belt straps and corners on its iconic cases, British luxury travel lifestyle brand Globe-Trotter has been handcrafting luggages since 1897. Its durable yet light construction has made it a hit among royalty and explorers, such as Queen Elizabeth II, Sir Winston Churchill and Sir Edmund Hillary.

Seen on the runway, the vanity case was Gucci-fied with the signature GG pattern, bamboo handle, front-lock closure and a detachable leather strap that can be adjusted to the length desired. To complete your travel needs is a set of four-wheel trolley cases in cabin, medium and cargo size.

Michele’s corp of creative allies has another American great: The legendary Paramount Pictures Corporation is the fifth oldest surviving film studio in the world. Crowned with a ring of 24 stars, the distinctive pyramidal mountain has been its logo since inception in 1912, which makes it the oldest surviving symbol of Hollywood film.

Michele takes the celebrated emblem out of the silver screen and onto ready-to-wear. It adorns leather bombers, checked shirts, sweatshirts and the back of a men’s evening jacket in velvet, but the  most conspicuous pieces are the T-shirt peeking out under a leather jacket (above) and the gown with a glitzy sequin-embroidered appliqué of the logo (left).

Michele always has something cute in his collections. His Boston terriers Bosco and Orso appeared last season. Snow White and Bugs Bunny turned up for Spring/Summer 2018. There was the Guccy teddy bear in Cruise 2018, and remember the child-like scrawls of Coco Capitan and GucciGhost?

Now he looks East — Chikae Ide, the Japanese illustrator behind Viva! Volleyball. The manga was first published in 1968, a time when volleyball was popular in Japan. Some of the new-season sweatshirts and T-shirts feature her original prints. You’ll spot Natalia, a Viva! Volleyball character on a mouliné knit jumper in the show, as well as the quintessential manga-style pair of eyes along with the words, “to be continued”, in Japanese.

Did you catch the other Hollywood reference in this collection? Look 12’s zip-trimmed sweatshirt stars Faster, Pussycat! Kill! Kill! from American director Russ Meyer, known for depicting female empowerment. About three go-go dancers who embark on a spree of kidnapping and murder in the Californian desert, the 1965 movie is regarded as seminal in feminist films.

For Michele, it was the bold graphics of the movie poster that caught his attention. He sidestepped the ferocious femme fatales and adopted the campy style of the text. This surprisingly lighthanded touch seemed to convey that a subtle evocation of this cult classic sufficed his ode to Hollywood.