Scents in the City: Inside Berlin’s Boutique Luxury Fragrance Brand 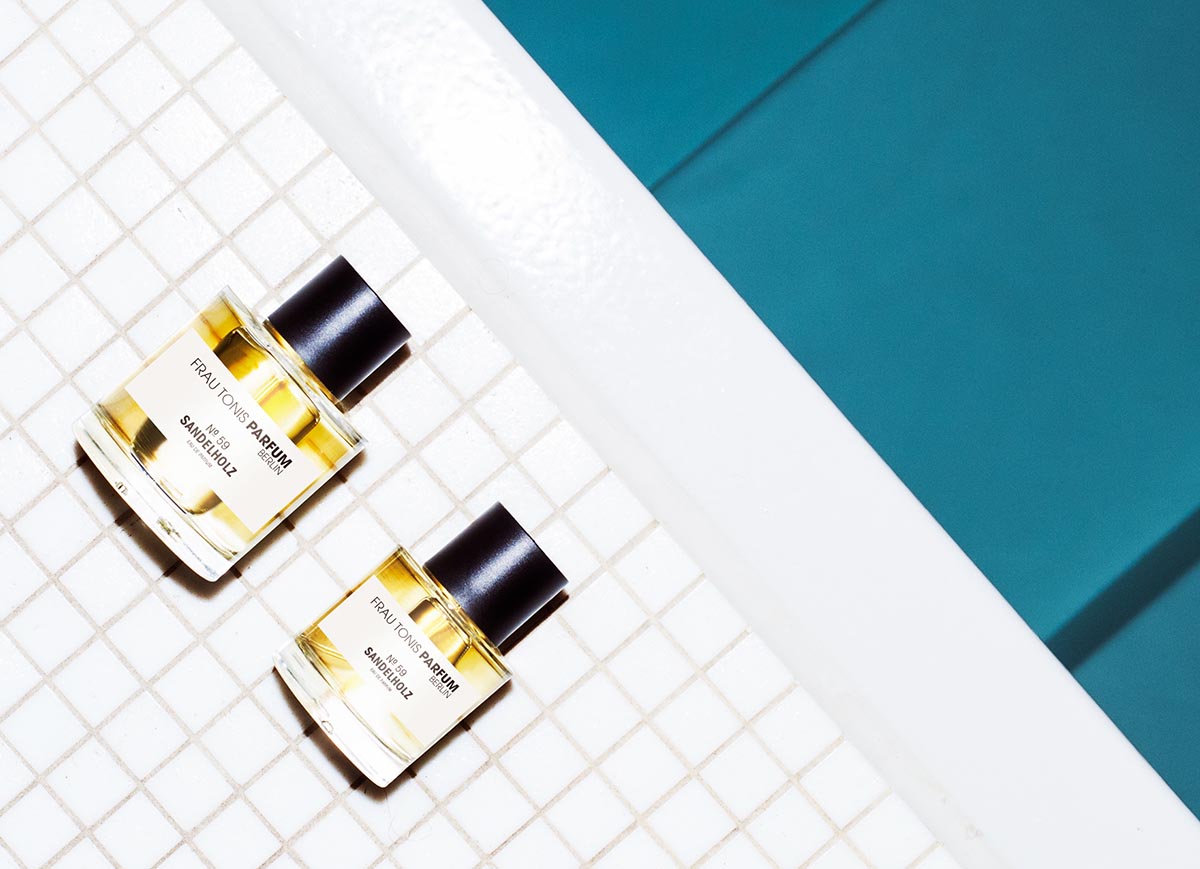 One summer afternoon in Berlin, a group of ladies clad in classic cuts in blacks and neutrals are sipping cava in a shoebox-sized boutique. Although the crowds and chaos of Checkpoint Charlie are just steps away, the group might as well be in another world.

One woman remarks that a certain scent reminds her of a trip she once took, while another thinks back to a forgotten childhood memory. Laughing, musing, reminiscing, the women all find their favourites and eventually combine a trio of them into something new.

Their custom-blended vials must rest for three days, to allow the molecular structures to break down and come together again, before they can grace the skin.

“People often say they wish for a perfume that will make them more seductive or sexy, and that’s not what we’re about at all,” says Stefanie Hanssen, the owner of Frau Tonis Parfum.

“We want a fragrance that does something for you, not just how other people perceive you. Sometimes we say it’s like we look into the diaries of our customers. We want to hear about memories and hopes and desires.”

It’s a vastly different approach to most mass-market retailers, who would rather push the latest big-brand bottle than delve into the psyches of their customers.

When Hanssen decided to launch her boutique business in 2009, she wanted an experience that was as far from generic department stores as possible. She had no idea how successful her small project would ultimately become.

To date, more than 5,000 customers have created their own personalised blends and publications such as Wallpaper, Vogue and The Wall Street Journal have all heaped praise upon the store.

Kaufhaus des Westens, or KaDeWe, Berlin’s most iconic luxury shopping centre, commissioned a special blend and requested the right to sell her wares.

The key to the brand’s success and rapid rise to prominence among in-the-know aficionados lies in both the product and its unconventional presentation.

The staff at this minimalist-chic parfumerie are psychologists, art students, translators – anything but sales personnel.

In lieu of glossy glamour shots of models and celebrities, the lone photograph adorning the wall is a black-and-white portrait of an elegant lady, the Frau Toni, after whom the shop was named and Hanssen’s grandmother. Her wise, witty eyes appear to survey the scene before her.

“My grandmother has always been a woman who says, ‘Less is more,’ and this business mirrors her life philosophy. Everything here is minimalist. We have only a few products, but we have good products,” muses Hanssen.

Frau Toni was only 40 when Hanssen was born and acted almost as a second mother to her while growing up. The 89-year-old still periodically visits the shop, which often moves her to tears.

“She has always been very special. Her clothes were always tailored and she always wore this exceptional fragrance with a hint of roses. When you grow up with someone like that, they become almost like an icon and this store is something of an homage to her.”

That sense of sophisticated understatement is readily apparent in the luxury fragrances themselves.

In stark contrast to commercial fragrances contained in gaudy bottles resembling stilettos or feminine silhouettes, each of the offerings here bears the same plain monochromatic label with a number, name and nothing else.

In Berlin’s grand tradition of eschewing conventional gender norms, every fragrance here is unisex. At times they seem to mold themselves to their wearers’ skin and personality, accentuating masculinity in some and femininity in others.

None are overpowering; even heavier scents such as agarwood, that intoxicating aroma found lingering in the air of Middle Eastern bazaars, soften with soothing notes of bergamot.

Hanssen stumbled upon the idea quite by accident on an evening at the Berlin Philharmonic with her husband in 2009. The woman sitting next to her wore a particularly intriguing scent, one that Hanssen did not recognise.

“There was something medicinal to it, but also almost green and still somehow moving. I couldn’t bring myself to ask her what it was, so I thought I would simply go around Berlin and describe how this perfume had smelled until I found it,” she says.

“I was in KaDeWe and Douglas and so many perfume stores, but the answer I got was always the same: ‘Oh, we don’t know, but why don’t you try the new fragrance from Prada or Gucci or Chanel?’”

Frustrated that no one seemed interested in honouring her specific request, she resolved to do something about it herself. “I thought, I would do it differently,” she says.

“I’ve always loved perfume. I knew that it was a risk to start my own business, but I thought, Why not, I’m in Berlin?”

It wasn’t long before word spread and her distinctive fragrances developed a devoted fanbase. Some of her concoctions are simple, while others are more complex and allude to a specific source of inspiration, such as No.18, a beguiling blend called “Bogota Berlin” after the city’s legendary bohemian hotel and artist hangout.

When the hotel fell victim to gentrification a couple years ago, Hanssen decided to honour its memory in olfactory form.

“It was in development for roughly two years. We spent ages brainstorming, trying to come up with how we could interpret this hotel, which has such an incredible history,” she says.

For an abode known for housing lovers of the avant-garde, nothing ordinary would do.

“In the end, we combined the concept of the Hotel Bogota with a touch of the city Bogotá. There are elements of this perfume that don’t seem like they would go together on paper, like roses and pepper or figs and cedarwood. It’s one of our bestsellers.”

Another bestseller required no brainstorming whatsoever, because it already existed.

No.37 starts with a powerful hit of violets, followed by waves of raspberry and licorice. This most eccentric number comes from the original recipe for the perfume that Marlene Dietrich always wore when she lived in Berlin in the 1920s.

“We asked a perfumer to reawaken this recipe and bring it back to life for us. As you might imagine, to some noses it’s almost abrasive, but when such a crazy star like Marlene Dietrich wore such an unusual scent, it made her even more spectacular,” she says.

It seems fitting for such a wildly divisive, larger-than-life figure.

“Between us, she wasn’t the greatest actress, but she was most definitely a star and a Berlinerin. And that is truly something.”

Facets of the Hauptstadt, be they hotels, actresses or even the linden blossoms that line the grand boulevards in spring, directly or indirectly inspire many of the fragrances here.

Indeed, one of Frau Tonis’s most sought-after scents is titled simply “Berlin”.

It’s part of a trio created for the KaDeWe group designed to embody the essence of Germany’s three most important urban hubs.

“I knew the Berlin perfume must smell unbelievably young, because this city is so full of life and energy. For me, Berlin is international and tolerant and this perfume reflects that,” she says.

Rather than start with the components, the team began the conceptualisation process by trying to distill Berlin down to a few key ideas, then figuring out how to encapsulate those.

“That’s why it also smells a bit edgy. Berlin is wild and young and a bit feisty. Munich is baroque and epic. Hamburg is cool and clear.”

As with everything else in her collection, the three could not be more different. Each has the ability to transport the wearer to another place, time or simply state of mind.

“So many of these perfumes have a small story behind them. When you close your eyes and inhale, it’s like you see a silent film playing,” she says.

“I think it’s beautiful that people find our perfumes meaningful, like a small oasis in the city.”