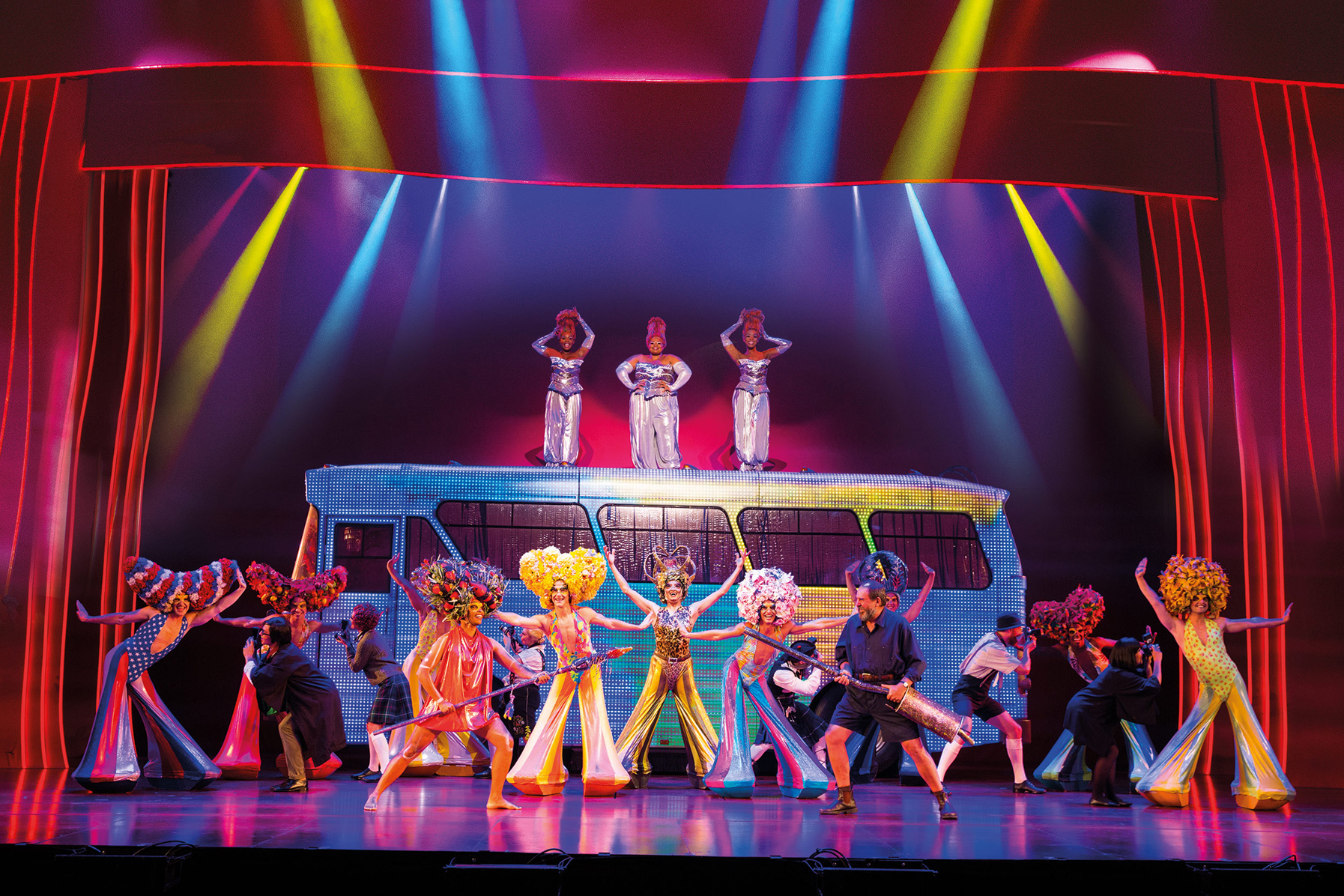 Prestige Towers is going through a period of serious obsession with all things drag, thanks to a small discovery made one evening while browsing through Netflix, where we spotted our very own Mike Ruiz, who photographs many of our covers, in a promo spot for RuPaul’s Drag Race. Since then, the more avid among us have been racing through episodes every spare moment – and that’s on top of watching all available YouTube videos for ways to achieve the perfect cut crease to rock in the office or to brush up on skills for Halloween.

On finding out that Priscilla Queen of the Desert was in town, we took the chance to pick the brains of Head of Wardrobe, Eugene Titus, on all things costume, including how this musical – which is based on the movie that won a slew of awards in 1995 for Best Costume Design – goes about transforming actors into splendid drag queens and how they replicate the infamous “tuck”.

As Head of Wardrobe, you maintain costume and ensure actors are able to perform their best in the outfits. What do you need to bear in mind when choosing costumes for a production like Priscilla?

Priscilla is big, it’s large and in charge. It’s also very colourful, so we always have to think very clearly about balancing the over-the-top nature of the production and practicality. All the costumes have been very cleverly thought out. It’s easy access and easy in, easy out.

How do these costumes compare to those of real drag queens? Do you take cues from them?

Yeah, absolutely. We definitely look to drag queens for quite a few aspects, because the movements are very exaggerated. For example, the shoulder pads are bigger on drag queens than say, women, and that’s something that’s important to work in.

We cut from ladies’ blocks for the costumes and we make undergarments that have inbuilt hips, boobs and all the other shapes we need the actors to have. Everything is cinched in and based on women’s tailoring, so it’s completely realistic.

What about the tuck?

Like all drag queens, good undergarments are crucial. None of our actors do the tuck, so we’re talking about good support hose that lift, tuck and sit in all the necessary places.

What separates stage costumes from, say, movie or television wardrobes?

Theatres are big shows and everything needs to be exaggerated. Everything is bigger and louder for the audience, so we look at size, which is very important. We create volume whenever we possibly can.

Any tips for our readers?

Yeah, so in the show we have these feather headdresses. Usually, if you put feathers on a hat, it could fall flat but to create height and volume, we’ve built understructures with chicken wire to amp it up. Same with everything we do ­– extra boobies, extra layering, extra tailoring.

What are costumes meant to do?

I think they’re meant to take you on a journey – to make you see and feel things you’ve never before. To open up your eyes to a different world, so there’s lots of colour, vigour and laughter. We try to bring all that emotion out into the costume when there’re quiet moments, when there’re big, loud moments. The costume helps develop the character and convey the message.

What are some of the best costumes in Priscilla?

My goosebumps moment would have to be when the Gumbies come out. There’s a moment at the end of the first act where the queens are going through the desert and they meet all these characters along the way and the Gumbies are just magnificent. Massive, massive headdresses with these amazing half-moon platform shoes that are incredibly difficult to walk on and they do crazy stuff. They’ve practiced and rehearsed for so long to get the sequence right, but it still gives me goosebumps when a whole stream of them come out from the side stage and they all start doing moves like “Stayin’ Alive”. I’ve never seen anything so cleverly done and they are literally huge circular shoes cut in half but the trousers cover the legs so you don’t see exactly what’s going on. We kept them very sexy at the top – low cut, like a little bathing costume with Lycra trousers. They’re awesome.

Things break all the time but I have a big team – six travelling and seven local members to keep disasters from striking, but of course something is bound to go wrong. Just recently, one of the shoes broke and it was a very obvious part of the show. So, I have a pouch with tape and elastic and safety pins, and duct tape is one of our saving graces – we duct-taped the shoe on. Literally around his leg. With so much going on onstage, the colour, the movement, you barely notice it. But the shoe is fixed now.

A lot of dresses have nude illusions. Daniel [the main character] comes out in the beginning of the show. He wears a puppet dress and all the beading is done on a transparent mesh body, so it’s a long sleeve, giving the illusion that it’s just running from nothing into mid-air, like it’s glued onto his body. That’s always fun.