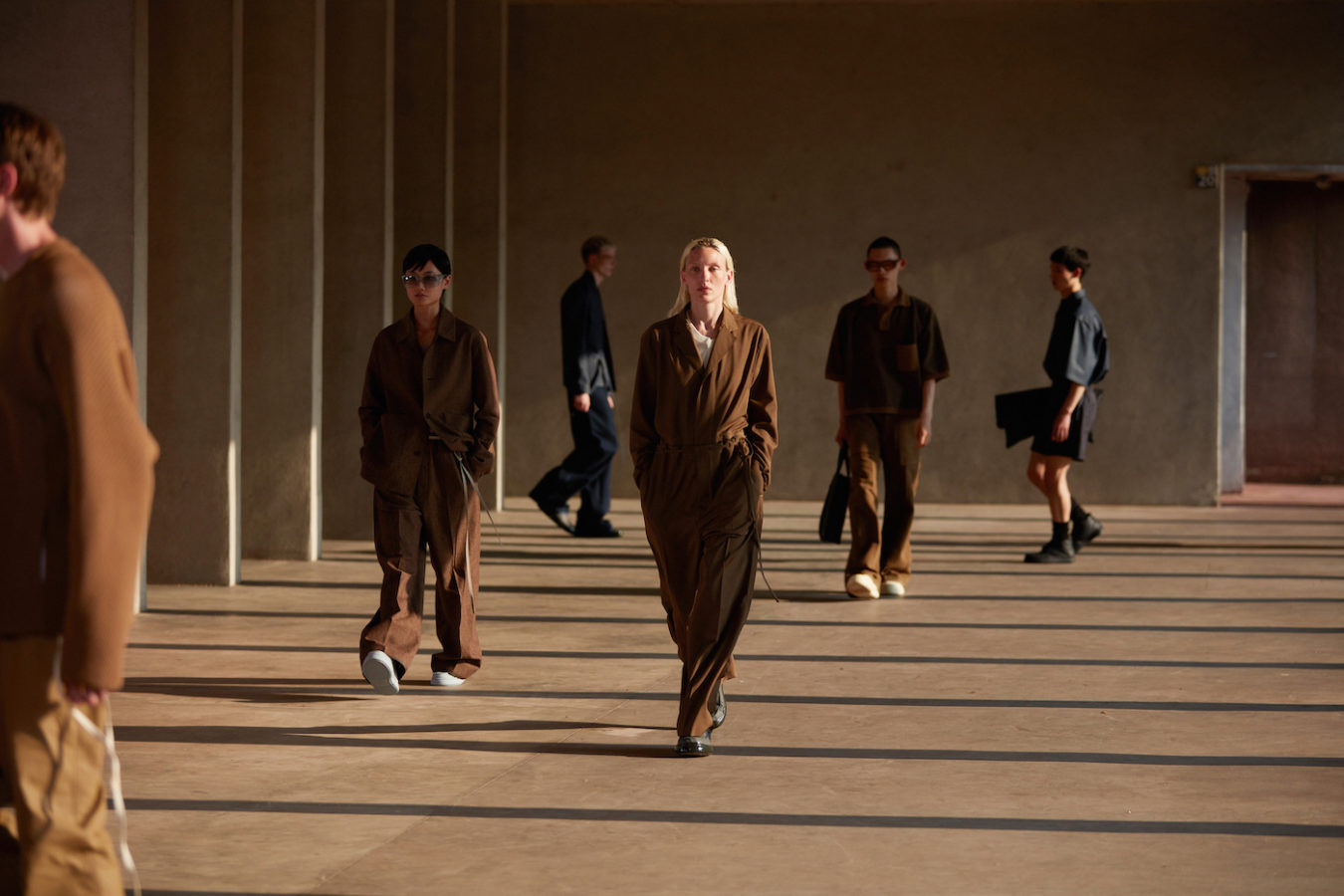 Zegna-clad models negotiate a green maze, then walk through industrial buildings and up walkways struck with sunlight.

“I wanted to communicate with freedom in The New Set we’re all in.” says Sartori, who’s dressed that morning in a crisp white T-shirt. It’s been several years since we last met, either around fashion week in Milan or at Zegna’s famous mills in Trivero, in the Biellese Alps, and the world has changed considerably since then. “It’s a time when comfort is key and no longer just a commercial asset, or a request from marketing. Comfort is an undeniable pillar of design today, because if there’s one thing we learned from this period, it’s that we don’t need certain things anymore, but we definitely need other things.”

In this instance, Sartori is talking about fashion, but it could be an address about the greater state of life. And even if there is a return to a certain uniform of the past, he’s sure that we won’t go back to identical former constrictions. It’s all about a “comfortable attitude, the right mood for yourself, respect for your own personality. “This is what I wanted to communicate,” he says. “Comfort, freedom, lightness, fluidity, unisex-styles, the energy of the silhouettes and the design. The colour and the vibrancy – all these went into this idea of the modern set, the modern world.”

There’s certainly a feeling of lightness and freedom in the cuts and shapes. Airy summer silhouettes are a perfect blend of expert tailoring and luxury leisurewear. For a brand whose heritage is so anchored in men’s suits (and formal suits at that), this new attitude comes through with glorious aplomb.

Breezy kimono jackets, workwear pockets and sensual knitwear – along with comfortable, effortless jerseys – are elevated with couture stylings and come in utility hues such as moss green and navy, as well as crisp whites and powder pastels. Wide-leg pants and side sleeves provide masculine shape, while long duster coats elegantly elongate.

It’s hard to ignore those sumptuous summer pastels that Sartori is serving up: vanilla, pink, light green and light blue, which are all the result of a conscious deep dive. There are many pieces in the same hue, with fabrics treated so as to get exactly the same tone and shade, regardless of whether they’re cotton, wool, nylon or cashmere.

The shift towards monochromatic and matching looks delights Sartori. “I’m a big fan,” he says. “And you’ve seen it in the show, with this monochromatic loop. Why? Because it’s like a changing perspective, cleaning and offering a strong image through the shape and the design, and not with the colours. When you put three, four or five together, your eye is reading mostly the mix and match of colours. “I want people to read the silhouette and the shape … so I go monochromatic. I design accordingly,” Sartori says of his spring/summer range. He and his team even wore several items of clothing themselves so they could understand how the garments feel when lived in.

The focus of change is on these fluid tops and underpinnings – sometimes made longer on the body – roomier jackets and shirts. It’s a more relaxed evolution, which Sartori started in spring/summer 2021 (designed during the first lockdown) and also employed directional softness, pastel colours, more roomy fits and pleated trousers.

Men’s suits are going through a kind of emancipation of late, with leisure and formal melding more than ever before – and, of course, there’s the boom in luxury sportswear too. Sartori, however, is well placed to steer the Zegna ship 360, as he previously helmed Z Zegna and then the LVMH-owned French menswear and accessories hrand Berluti, before returning to the Italian house.

A new way of dressing and living will surely inform much of menswear in the future, so was it difficult to veer in a new direction from a mindset of a label known for its formal suits? During the first lockdown, Sartori felt that “the past was a little inappropriate … I thought, ‘Oh my God, this doesn’t suit me or my customer.’”

In one way, he says, the change was easy because everything is still tailor-made with tailoring techniques, despite the more relaxed aesthetic. He’s using the same mills, ateliers, pattern makers and artisans, as well as the same sources of raw materials. “It’s still the best cashmere, the best wool and the best silk. I might ask for different finishes or different weaves, but it’s still coming from the best raw material and the best sources.”

The difficult part is that the uniform he’s playing around with has changed; it’s no longer focused on just the suit and the tie. And Sartori says that the retail experience will be transformed, too. “I imagine the store of the future,” he says, “and while tailored suits, shirts and furnishings will still be anchored to Zegna and the DNA of Zegna, it will be a more dedicated to one-to-one experience.”

In terms of men’s suits and formalwear, he’s seeing an uptick in made-to-measure or bespoke, but also a rise in personal styling with prêt-à-porter and sports. Men will be looking for a more personal service. Zegna’s sportswear is selling like crazy, says Sartori, so it’s no wonder we see its influences here. The narrative blend of leisurewear and high fashion is part of a radical “mindset change” at Zegna. It’s one that I suspect many of us will grow to enjoy even more – some see this as an acceleration of what would have happened in men’s style anyway.

As we emerge from grim Covid times, the spring/ summer 2022 collection Sartori is offering is so fresh that it evokes the scent of citrus trees, freshly washed linen and forest paths. A revisit of silhouettes alongside signature beautiful craftsmanship – “It’s very couture work here,” he quips – means new fits, new emotions and a welcome sense of positivity. As Sartori says: “These new garments are giving a new feel and attitude.”

Long before mainstream and luxury fashion became sustainability-conscious, fuelled in part by marketing and PR considerations, the house of Ermenegildo Zegna was walking the walk rather than talking the talk through initiatives such as the Oasi Zegna nature reserve, a reforestation project initiated in the 1930s by the company’s founder.

“Zegna had a green mindset early on,” Sartori explains. “I found the words and the vision of founder Ermenegildo very touching. One of the centres of his vision, written in his notebook, says, ‘I want to build the most beautiful brand in the world, taking care of the people and of the environment,’ so we all feel committed to this big ‘green thought’ mindset behind it.”

This was written in 1910 — and by the 1930s Zegna was planting half a million conifers across the mountains that surround his wool mill and headquarters. In 1940s, he built the Panoramica Zegna, a road linking the surrounding villages and towns, to further support the sustainable balance between man, culture and nature in the region. Since then, the house has continued to invest in the preservation of those mountain forests and the values of sustainability. Thirty times the size of New York’s Central Park, Oasi Zegna was established in 1993 as a freely accessible public nature park covering around 100 square kilometres between Trivero and Valle Cervo in the Biellese Alps.

After Sartori recently rejoined Zegna, he and CEO Gildo Zegna were brainstorming and decided to do a deep-dive audit from raw material to finished product. Once the calculation was done, steps were made to reduce waste at each production ladder. The brand launched #UseTheExisting initiative, which extends beyond recovered fibres, threads and fabrics from production to include recycled materials such as plastic, which are employed in innovative ways — such as the Z Zegna’s outerwear made from recycled bottles.