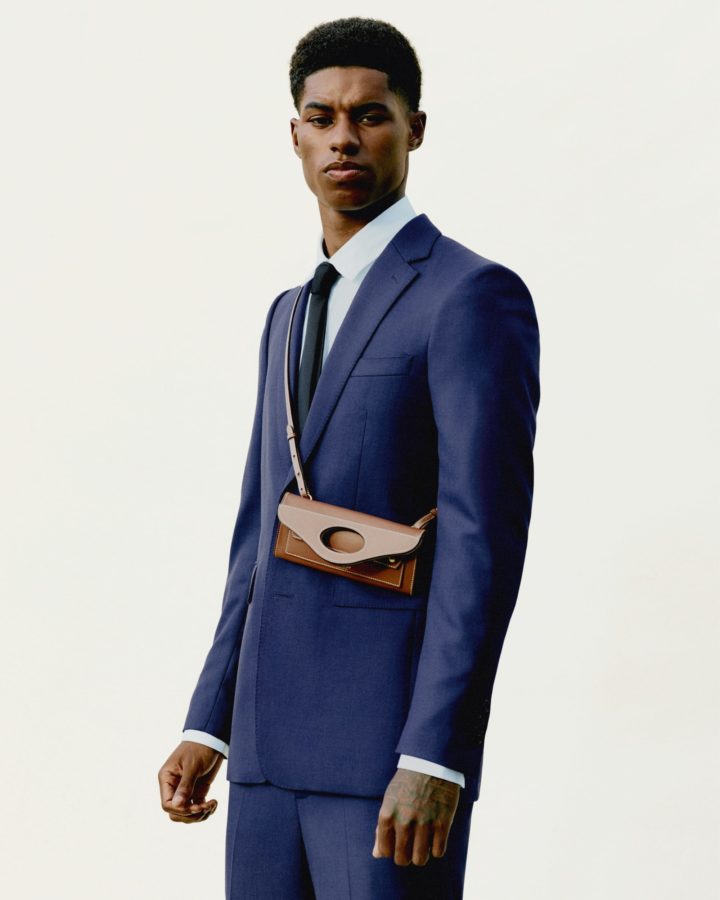 Burberry is founded on the principle that clothing should be designed to protect people from weather hazards.

This sense of responsibility isn’t just apparent in Burberry’s collections. Beyond fashion, the British brand is actively taking steps to protect our planet and drive positive change in communities through powerful collaborations. Its contributions did not go unnoticed, too. Last year, Burberry was included in the Dow Jones Sustainability Index (DJSI) for the fifth consecutive year, and was ranked third place in the Textiles, Apparels & Luxury Goods sector for its economic, environmental and social impact.

In this season of giving, Burberry has teamed up with Manchester United’s lead striker Marcus Rashford, a vocal advocate for vulnerable children, for its latest holiday campaign, which includes an ambitious initiative that supports charities and youth organisations. As well as continuing its contribution to FareShare, a food poverty and food waste charity in the UK, the brand is working with London Youth, Manchester’s Norbrook Youth Club and Woodhouse Lifestyle Centre, New York’s Wide Rainbow and the International Youth Foundation to help create a better future for the young.

‘This campaign is about looking forward, looking to the future; inspired by youth, it brings together a community of different talents and worlds as one. United by passion, commitment and love, this campaign is a celebration of their dreams, of exploring and of always going beyond,” says Chief Creative Officer Riccardo Tisci. “I’m honoured that Burberry can partner with Marcus Rashford and amazing organisations around the world to give back to the next generation, allowing them to explore their dreams. And I wanted to take that concept of exploring beyond to express a real sense of freedom in the campaign. It’s all about that fearless spirit and imagination when pushing boundaries, something that we hold so close to our hearts at Burberry.”

Captured by Rafael Pavarotti and styled by Ibrahim Karama, the campaign images celebrate the community around Burberry: blurring boundaries, crossing divides, bringing people together. A frieze of models and dancers are featured alongside Rashford, wearing the likes of Burberry’s iconic trench coats, diamond-quilted barn jackets, and hooded puffer jackets made from recycled nylon.

In the same spirit of dynamic, carefree youthfulness, the much-talked-about campaign film sees a troupe of Burberry-clad characters dancing through Britain’s gritty, grey landscape to a modern rendition of “Singin’ in the Rain”, braving the elements and dodging hailstones as they move from city to sea. Choreographed by (LA)HORDE and produced in collaboration with directors Megaforce, it’s a welcome shot of optimism and inspiration in this wretched time with its celebration of diversity, unity and possibilities. Hit play; your next two-minutes will be well-spent:

Sign up to get the latest luxury and lifestyle news delivered to your inbox.
Fashion charity Burberry Sustainability christmas 2020
Crystal Lee
Digital Editor
Prestige Singapore's Digital Editor wonders if she's better with words or numbers. Some days she thinks she's terrible at both. But most of the time, she's pretty good at eating, drinking, admiring beautiful things, and exploring new worlds.
Wine and Dine Tech travel culture beauty Fashion