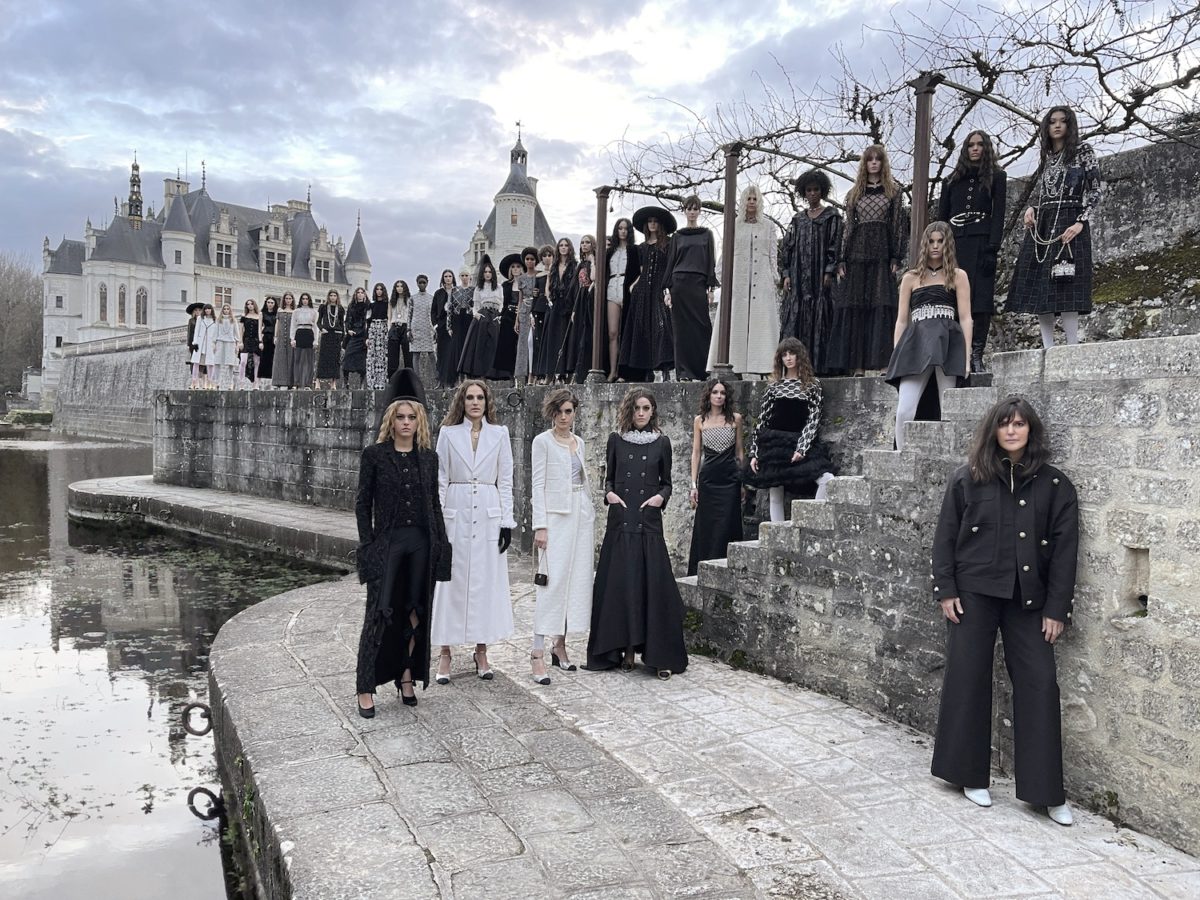 Founded in 1880, the expert in flowers and feathers joined Chanel’s Métiers d’art hub in 1996, following three decades of collaboration when founder Gabrielle Chanel embraced the camellia as an emblematic house element.

Look 57 reveals the maison’s strength in textile embellishment with a skirt that took 210 hours of embroidery alone. It has two tiers made out of tulle flounces. On the top, the shorter layer is chequered with a velvet braid punctuated with golden pearls, while flaunting marabou feather pom-poms. No less ornate, the bottom layer is decorated with golden pearls atop black rooster feathers. Likewise for the deceptively simple-looking pants, which are elevated with double georgette pleats requiring 14 hours’ work.

The legendary embroiderer, established in 1924, has been collaborating with Chanel since Karl Lagerfeld’s appointment in 1983. For this collection, the maison proposed exclusive reinterpretations of Chanel’s aesthetic codes, such as this tweed skirt in Look 17.

Black velvet ribbons frame the sequined embroidery in gorgeous hues of red, pink, opaline and burgundy, creating a geometric pattern evocative of both the latticework of the coffered ceilings at the Château de Chenonceau, as well as Chanel’s storied quilted pattern.

The work of Montex embroidery is reputed to be immutable, showcasing designs that defy imagination through ingenious combinations of different techniques. The prowess of the 82-year-old atelier is exquisitely expressed on the lapel of this jacket in Look 3.

It took 60 hours of embroidery to animate the bouquet inspired by the Château de Chenonceau’s tapestries. Guided by hand, a 19th-century Cornely machine composed the bouquet motifs enlivened with shades of green, pink and fuchsia. Next, a Lunéville crochet hook embroiders the white background, stems and flower petals with nearly 17,000 sequins and cuvettes – carried out on the underside of the fabric – before needlework completes the background with silver sequins and crystal strass.