Fendi California Sky: How veering off-course led to this collaboration

Behind Joshua Vides’ cartoonish graphics and latest collaboration with Silvia Venturini Fendi are lessons on how veering off-course and taking on the unexpected can be rewarding. 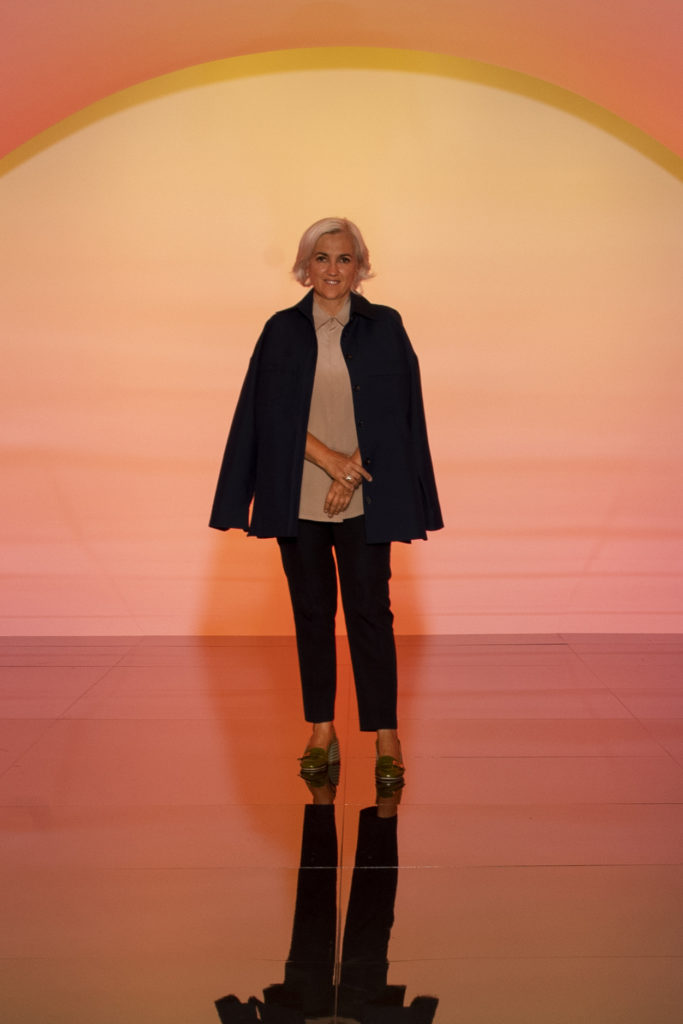 Silvia Venturini Fendi is looking forward to collaborations. “It is something that I’d like to do more because there is always this confrontation.” The family-led luxury fashion house of Fendi is no stranger to working with outsiders. Its 54 year-long partnership with the late Karl Lagerfeld — he worked with Silvia’s mother and aunts initially — makes a strong case in point. “There was always a vocal chorus around creativity. So sharing our creativity and doing collaborations in a very open way is something that is very much in our brand DNA.”

She kick-starts Pre-Fall 2020 with an exclusive collaboration with Los Angeles-based visual artist Joshua Vides, who has “drawn” over all-white ready-to-wear and accessories in his signature black marker style. In the California Sky collection, he traces seams and edges, as well as adds shading, to create audacious 3D tromp-l’oeil effects, complete with reinterpretations of the Fendi Stamps and FF logo.

Silvia stretches the summery vibes from her holiday-inspired Spring/Summer 2020’s Solar Flair collection. She strips off all the colours and reworks the motifs with Joshua’s cartoonish monochromatic twist infusing a free spirit and cool edge to women’s, men’s and kid’s ranges.

Although he began drawing since he was young, Joshua’s journey to becoming a respected artist was not conventional. Born and raised in Rialto, California, the first-generation Guatemalan-American’s father was a truck driver while his mother was a nurse. Growing up in the low-income city led to a stint with a street gang until he turned 15. Graffiti and skateboarding were his means of creative self-expression. At 19, he started a streetwear brand called CLSC (read “classic”). “I had so much energy I didn’t know what to do with it,” he recalls. “I was really into streetwear. At the time, there were only a handful of brands. I thought, ‘I can print on T-shirts’. So I tried my hand at that and that turned into the next seven years of my life.” The business started with 15 employees and a store in the Fairfax district in Los Angeles, before it grew into an lifestyle label carried by 400 retailers worldwide.

“In 2017, I kind of hit a wall. I felt that I needed to do something else. So I walked away from the brand that I had built,” he explains. Upon his wife’s encouragement, he tapped on his background in graffiti to come up with a concept he calls Reality to Idea, which basically reduces and returns 3D objects — from sneakers to multi-storey buildings — to its origins as 2D black and white sketches. Think of it as new-gen Op Art. As the streetwear veteran’s stature grew in the modern art community, megabrands the likes of Google, Nike, and Mercedes-Benz came knocking.

When Fendi set up Peekaboo Bar in iconic luxury department store Harrods last year, it asked Joshua to design the pop-up space, and later, Fendi Caffe as well. He showed his mettle as sudden opportunities opened up before the launch, flexing his creative muscles beyond spaces to Defender protective covers, limited-edition skateboard decks and even crockery for the café.

Spurred by the success from deviations of the original plan, and amazed at the emotional range a black marker could produce, Silvia invited him to Fendi’s creative studios in Rome to expand his artistic world with the Pre-Fall 2020 collection. “It was my assistant Marco and I in a room filled with white products, a moodboard of my works, and the moodboard for Solar Flair.” Joshua lets on. “Silvia was so relaxed and mellow about everything; she was like, ‘What do you want to do?’. She looked at some things, and she went ‘Oh that’s really cool’ or ‘Nah, let’s pass on that’. She was just so open.”

“It was nice and fun, and I would say also fast,” adds Silvia. “When you have good ideas, the process flows fast. Today, long-distance collaborations are easy because you can Whatsapp every idea and every little change.”

To streamline the usually lengthy design process, Joshua created motifs and ideas for Silvia and the design team to play with. “And they crushed it. They sent over a catalogue, and it’s just blew my mind.” He was excited to see a full collection of his artwork for the first time. “It was a huge moment for me that I will remember for the rest of my life.”

Question is, why is the collection christened California Sky? “When we worked in the studio, where there are enormous, like 20 m-high windows, we often looked up at the sky. We were very much inspired by the view,” answers Silvia.

The sky-like dégradé effect from tie-dyed fabrics makes an apt follow-up to her Solar Flair collection. “With a touch of blue and lilac, it resembles Californian sunsets. Joshua’s Californian, so who better than him could represent that?” she says. Her suggestion of the colourful background — a first for Joshua — struck a personal chord with him. “In Rialto, the only thing I could look up to was the Californian sky.”

Silvia muses on this variation from the original black and white concept: “What I have learnt is not to be predictable. I think that being open to other people is a way of exploring new things. This brings another point of view and is enriching.”