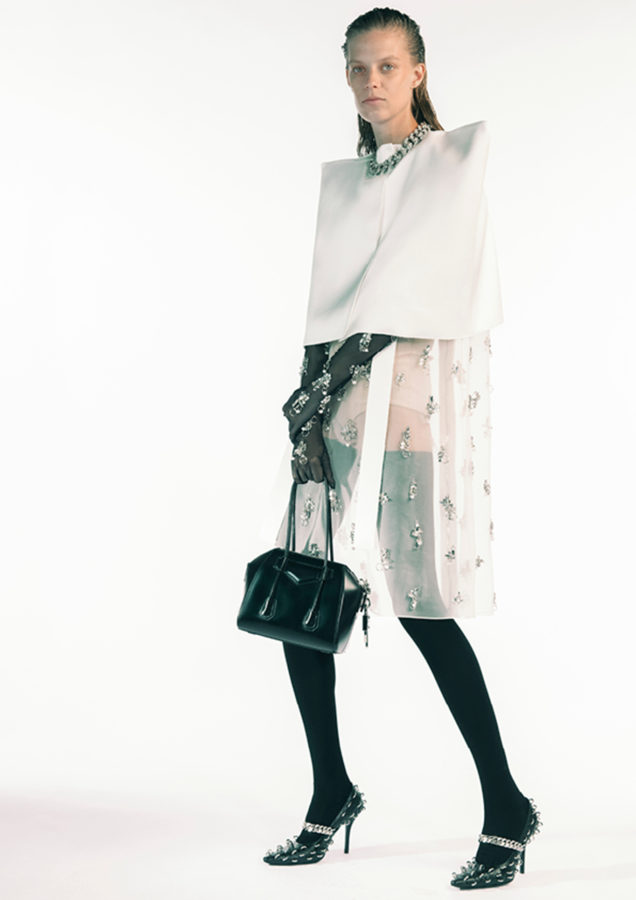 Matthew M. Williams reveals his inaugural collection for Givenchy, unveiling his idea of pragmatism that blends with the house’s sleek luxury.

The American designer presented his inaugural collection as creative director of Givenchy in a series of lookbook images taken by Heji Shin. The spring/summer 2021 collection, both for men and women, was created during the worldwide lockdown earlier this year, just after the announcement of Williams’ appointment at the luxury house.

The collection explores Williams’ knack for utility, as shown in his 1017 ALYX 9SM designs, fused with the signature sleek luxury of Givenchy. “A sampler of what is to come,” according to the collection notes, it delves into Givenchy through a stream of consciousness for Williams. The collection also sees the utilisation of Givenchy’s archives that points to the past, present and future.

Williams notably chose to focus on hardware which, according to him, is something that unites the women and men of Givenchy, a symbolic nexus of utility and luxury. The Lover’s Lock is a unisex object of utility, decoration and commitment and emotion; a sincere yet playful symbol of Paris and a nod to Le Pont des Arts. It also points to Williams’ commitment to the world of Givenchy in this first proposal as creative director. This padlock hardware accented the collection, used as a fastening on oversized leather handbags, or decorating belts like charms.

“You find the pieces of the puzzle for a collection, building it from symbols and signs, but never forgetting the reality of the person who will wear it and bring it to life,” Williams noted. “The women and men should be powerful and effortless, equal and joyful, a reflection of who they really are – only more so. It’s about finding the humanity in luxury.”

Elsewhere in the collection, Williams pivots between his idea of pragmatism and the feeling of elegance and playfulness established in Givenchy’s DNA. He plays the elements of past and present such as the Tryp-toe shoe and stockings, the Horn heel and hat together and a further examination of the Antigona bag. They are joined by the new unisex Cut-out bag as well as the G chains, objects that will add to the history of the house. Denim and sportswear elements were infused, as seen in the leather parka pullovers and the new technical coatings of denim in both paint and resin. Interestingly, these are just as labor intensive as the collection’s more traditional embroideries. It is a sign of Williams’ Californian sensibility transplanted to Europe that he approaches the two sides with equal confidence.

Sign up to get the latest luxury and lifestyle news delivered to your inbox.
Ajeng G. Anindita
Fashion