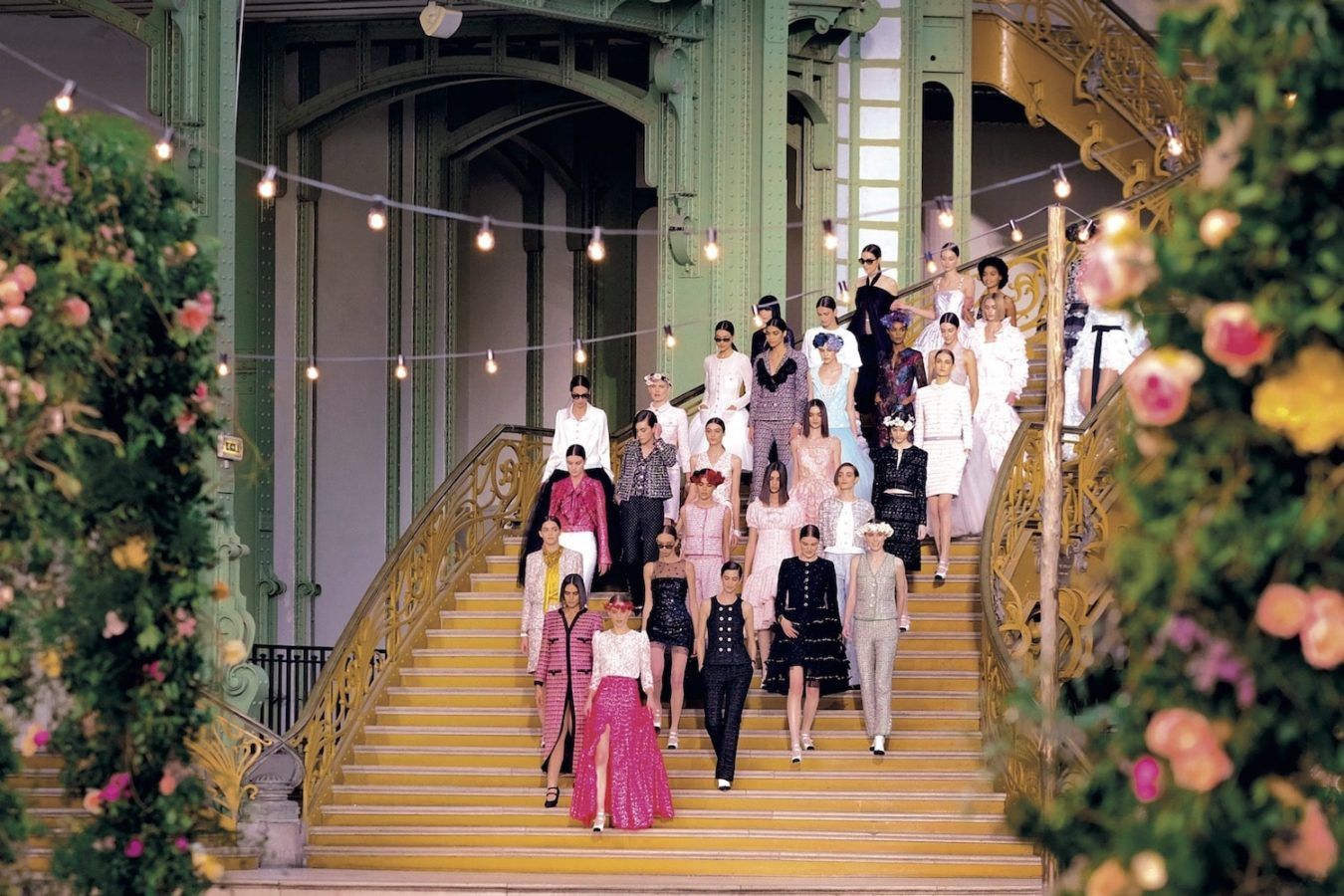 In anticipation of a freer and more hopeful year, haute couture for Spring/Summer 2021 is bringing us lashings of sartorial fantasy and ageless craft, as well as whimsy and escapism, writes Jing Zhang. 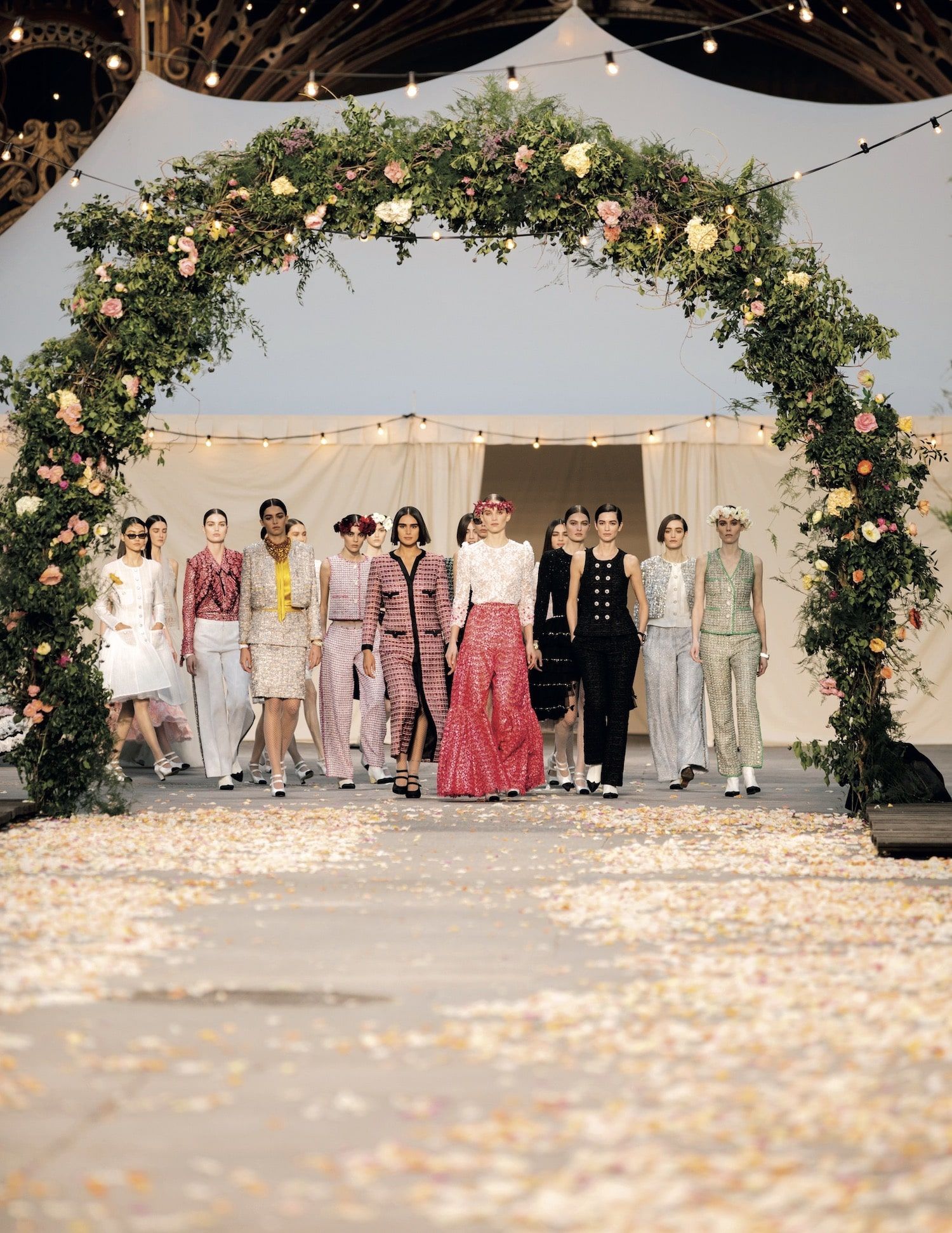 Chanel’s Spring/Summer 2021 haute couture line-up aimed to recall a big family celebration (remember those?), with models descending the stairs of the Grand Palais and passing beneath arches of flowers. While other houses chose to go down an impossible fantasy route, Virginie Viard’s 1920s silhouettes were much more grounded. There were long dresses in ecru satin crêpe with a train, embroidered by Lesage with strass and pearl butterflies, plus a wing collar and shirt cuffs. There were long tweed button-downs, vests, trousers and skirts in gentle spring tones full of positivity. Long tulle skirts and 3D embroidered fabrics provided ethereal eye candy in pristine full white, ivory and black outfits.

Chanel also toyed with ideas of dance, freedom, celebrations and family gatherings, such as a wedding or a summer soirée where balmy air envelops the guests; thus came movement in petticoats and tiers of flounced crêpe georgette. The idea was also embodied by petticoats in motion, by the tiers of flounced crêpe georgette and two-tone Mary Jane shoes favoured by tango dancers, but all done in inimitable Chanel style.

Kim Jones is certainly making an impact at Fendi. A line-up of supermodels and celebrities including Naomi Campbell, Bella Hadid, Cara Delevingne, Demi Moore and Kate Moss (along with her daughter Lila) wore gowns that were romantic and transcendent, with a large serving of the “renegade British sensibility of the Bloomsbury Group” alongside classical Italian beauty.

The show notes that came with this Spring/ Summer 2021 collection included a quote from Virginia Woolf’s Orlando: “Vain trifles as they seem, clothes have, they say, more important offices than to merely keep us warm. They change our view of the world and the world’s view of us.”

In his first haute couture collection, Jones paid homage to Britain’s Bloomsbury cultural set of the early decades of the 20th century, as well as Fendi’s Roman heritage. Virginia Woolf and her sister Vanessa Bell’s liberated creativity were inspirations, alongside Fendi’s DNA and the beauty of Italian art and sculpture. Jones dug deep within both cultures and found many undiscovered parallels – for example, from marble, as a classic Italian material, to the stone used to bind books published by Virginia and husband Leonard Woolf.

Gentle shimmers and metallics often created a mirage-like effect to some of these iridescent outfits. Motifs and decor used by the Bloomsbury Set at their homes found echoes in the embroideries and embellished accessories. Woven jacquards and silken gowns were crafted with intarsia furs, velvet ribbons and hand- beaded tailoring. As a family-run company, Fendi’s sense of continuity is important. Jones took monograms from predecessor Karl Lagerfeld’s final collection and beaded them onto boots, while the concept of family – both real and chosen – is evident through the cast of people chosen to model the collection.

For Spring/Summer 2021, Viktor & Rolf proposed a Couture Rave, inspired by parties that once were and parties we hope are yet to come. Fantasy with an edge, the light- hearted, playful, youthful collection continues with upcycling elements employing archival materials in surprising combinations, such as vintage lace, jacquard, fragments of dresses and even sweatshirts.

The joyous, voluminous ballgown skirts in ruffles and tulle are paired with highly embellished (with metal, lace, crystal and vintage jewellery) body-cropped bra tops and single long gloves for a feminine silhouette. Then there are the looser, straight A-line and batwing outfits that employ more sporty fabrics. Cut up, deconstructed and put back together, this fantastical mishmash of “haute couture meets underground party” is an irreverent chaos of unexpected combinations, something that the design duo have carved out a niche for themselves. If this is supposed to take us away from the mundane outfits we’ve been enduring too much of lately, it does a good job – and with a shock to the system too. Held at Het Hem, a contemporary art centre in a former munitions factory outside of Amsterdam, the show celebrated the “power of transformation”.

Taking time to appreciate the rituals, human craft and values of haute couture, Valentino’s couture offering was at the same time very modern and of the moment. Luxurious separates, cosy tops, long trousers and elegant skirts came alongside the more regal red- carpet gowns. Modernity and even elements of futurism are conveyed through the beautifully simple lines and designer Pierpaolo Piccioli’s distinctive and committed long silhouettes. A long white origami-style coat reveals as much as it covers. Shiny liquid metallics, beading, embellishments and sparkles work to a futuristic effect rather than traditional sparkly, feminine glamour.

These outfits are “stripped of every evident artifice, of prints and decorations”, which give different effects when viewed up close or from afar. The theme of regeneration is particularly resonant at the moment and Valentino has expressed this well this season, with purity, refinement and, importantly, an element of surprise. 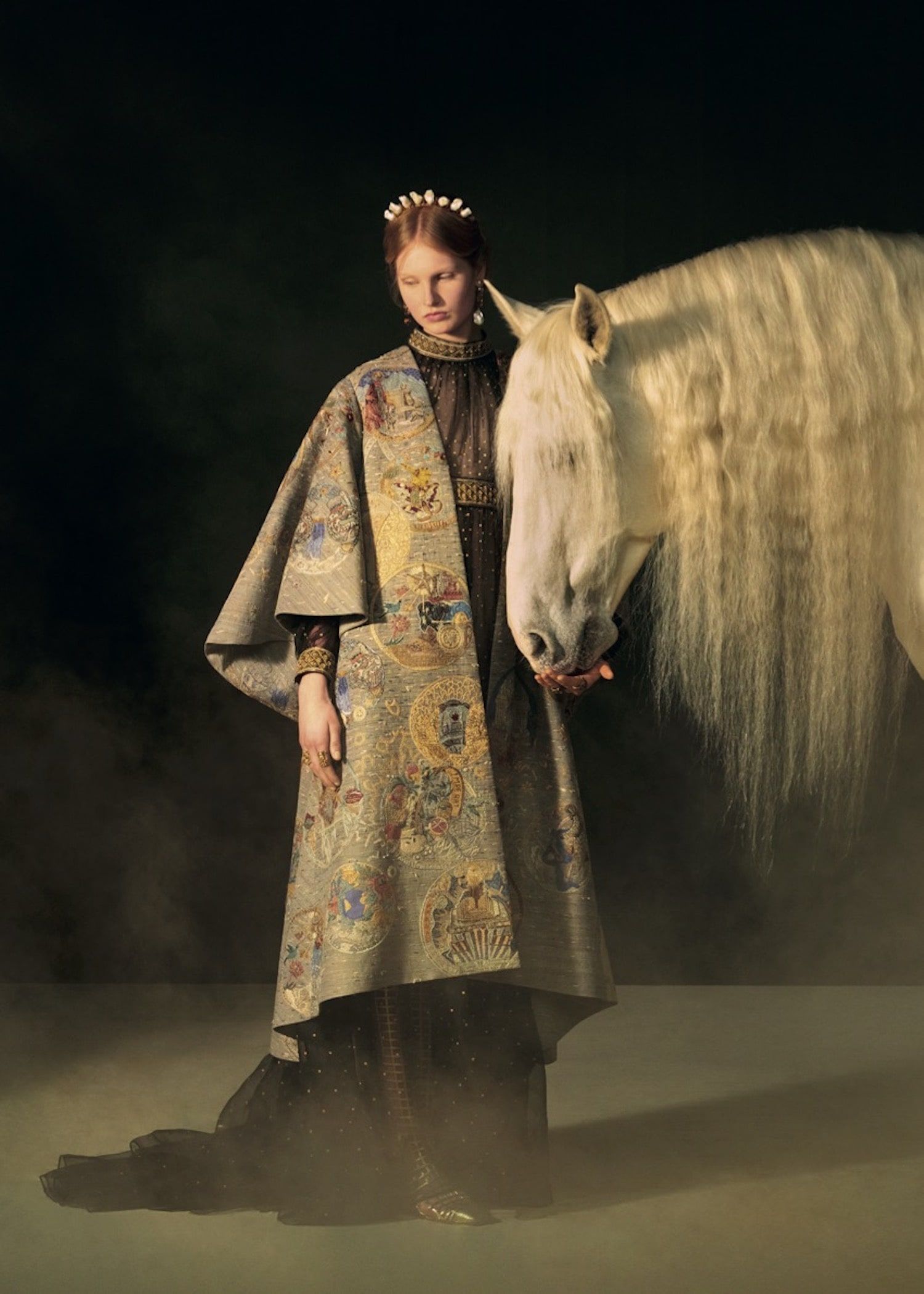 Ancient mythology has resonated in Maria Grazia Chiuri’s fantastical couture creations of late. Spring/Summer 2021 is no exception, taking on the theme with a spin on the Visconti- Sforza, the oldest known tarot cards in the world, while acknowledging Christian Dior’s own fascination with clairvoyants.

Couture garments were laden with heavy medieval influences – shapes gathered under the bust then fell voluminously to the ground, while long, hand-pleated dresses in silk lamé and gauze were both ethereal and grounding. The draped dresses in velvet, chenille or chiffon, as well as heavily embroidered coats (with jewels, feathers and flowers), gave an old- world and opulent flavour of the aristocratic lifestyles of the Visconti-Sforza families. Velvet and gold jacquard matching sets and grand capes made for a heavy, weighty collection that was steeped in a sense of history and anything but frivolous. The short fashion film Le Château du Tarot, directed by Matteo Garrone, took us on a surrealist journey of sartorial and spiritual discovery using a range of imaginative characters not amiss in Tarot stories.

A celebration of flamenco vibes, volume, froth and frill, Giambattista Valli’s haute couture offerings transport us to a world far, far away. Delectable gowns in reds, pinks, peach and one scrumptiously all-feathered are made for the red carpet. Yes, they’re OTT, but the femininity and exaggerated silhouettes give us a sense of lightness and frivolity too.

Worn with stunning 3D headpieces and floral masks, these are worthy of a Venetian masked ball but done in a classically dramatic, girlish Valli style. We wanted fantasy and this was it. With an otherworldliness of epic proportions and some tasteful confectionary shades, it’s a collection that will have avid, couture-loving fashionistas foaming at the mouth.