Style
What to wear when you’re working from home
Wine & Dine
OurTreat, a new initiative, aims to support healthcare workers and F&B outlets
Pursuits
Take a virtual tour of Tate Modern’s Andy Warhol retrospective
People & Events
Cover story: How Amanda Leong came out of her shell and gained newfound confidence
Sign up for our newsletter to receive what's happening in fashion, jewellery and watches.

Unlike his more high- profile counterparts, Erdem Moralioglu can hang around his showroom and gather honest, uncensored feedback from buyers, as he’s not yet not well recognised in person. The same cannot be said of the award‐winning designer’s work, characterised by experimental textiles, divine floral prints and a charming mid‐century sensibility that he’s made his calling card.
“I’ve always been very textile‐driven, whether it’s print, fabric manipulation or embroidery,” Moralioglu says of his womenswear label, which he launched in 2005 after graduating from London’s prestigious Royal College of Art. “It always feels integral to my work process – fabric and silhouette go hand in hand. I’d design a dress and along with it, imagine the fabric. Fabrics take a long time to develop, so we need to work on them early.

Opposites Attract
Erdem means “virtue” in Turkish, and when asked what he thinks his best virtue is, the Montreal‐born, London‐based designer, whose father is Turkish and mother, British, says that it’s curiosity, an inclination that saw through creative partnerships with the likes of Nars and the Royal Ballet. “I think what makes collaboration successful is when you learn something as well from them,” he says.
After buying a house in Bloomsbury, he found a plaque that led him to Victorian cross‐dressers Frederick Park and Ernest Boulton, otherwise known as Stella and Fanny, who lived as “sisters” in the 1860s. The tale was so compelling, it inspired his wonderfully eccentric collection for Spring/Summer 2019. “A story is what I need as a catalyst to create a collection,” he says.

Fanny, Stella and Rachel at the @metmuseum exhibition ‘Camp: Notes on Fashion’ @rachelbrosnahan

Moralioglu’s penchant for research took him to the National Portrait Gallery, where Victorian portraits of women and their dresses informed the collection’s oversized tailoring and many of the fabrications. Spanning shrunken jackets to voluminous puff sleeves, the idea of extreme scale underpinned bold silhouettes. Common in Victorian clothing was chine, which he explains as a weave composed of twisted threads that create a blurred effect. Applied on florals in odd colours, it is an apt allusion to blurring the line between genders. “Often, prints and the fabrics can be an extension of telling the story,” he adds.

At the art museum, he also discovered female entertainers dressed as men. “I didn’t realise how often women played men’s roles then. There were some extraordinary female cross-dressers,” he recalls with awe. “There was that kind of really odd exchange between genders in a very conservative time, which I found really interesting.”
The past is not so different from the present, where he notes “there’s as much openness as there is closeness”. In his runway show, many of the models’ faces were shrouded in veiled boater hats, which he called “the sexualness in hiding your face”.
“There’s a lot of Victorian erotic photography where the face is hidden because it’s illegal, so people didn’t want to risk getting identified,” he explains. “There’s something about concealing the face and exposing the rest of you that’s quite sexual.”
Were the hats in some way a statement about this age of the selfie and era of overexposure? “I never thought of that. But that’s a really interesting interpretation,” he muses. “We live in a strange time of self-obsession and filters. We’re constantly looking at ourselves because we can see immediately with our smartphones. It wasn’t a conscious reaction from me, maybe a subconscious one. But it’s an interesting observation. Sometimes I learn a lot from interviews.”

In his play of hide-and-seek, Moralioglu snuck men – his personification of Stella and Fanny – into the diverse line-up of models from different backgrounds and of different nationalities and genders (there were transsexual models). “The tailoring is quite mannish. There’s this ambiguity in the male-female contrast that I’ve always been fascinated with,” he reveals. “I have a twin sister. I grew up with someone who is me, but the opposite sex, so that sense of gender was always kind of relative to me. The way my parents raised us never made me feel like females were the weaker sex.”
But he is quick to clarify that the collection isn’t about gender fluidity. “It’s probably more about the idea of dressing to become who you think you are, as opposed to who you’re born as. In a way, we all dress to project who we hope to be.”
Neither does he feel that it’s about gender equality. “It goes back to my childhood again. My twin sister and I were brought up completely equal. Gender equality never came into mind because it was never something that I ever questioned. Because it just seems natural that we would be equal. My sister’s thoughts and ideas are just as valid as my own. I couldn’t imagine why they wouldn’t be.”
Wonder Women
His twin Sara (younger than him by 15 minutes) is a film-maker. “She’s amazing,” he says. “She just returned from El Salvador doing a documentary on the murder capital of the world. She’s very much a journalist. We’re similar in that we’re both very curious. We ask a lot of questions. And we both tell stories, in different contexts.”
Call it a side effect, but growing up with a twin sister and a stay-at-home mother, whom he names as the woman who most epitomises beauty, lent influences to his body of work rooted in exploring the codes of femininity. 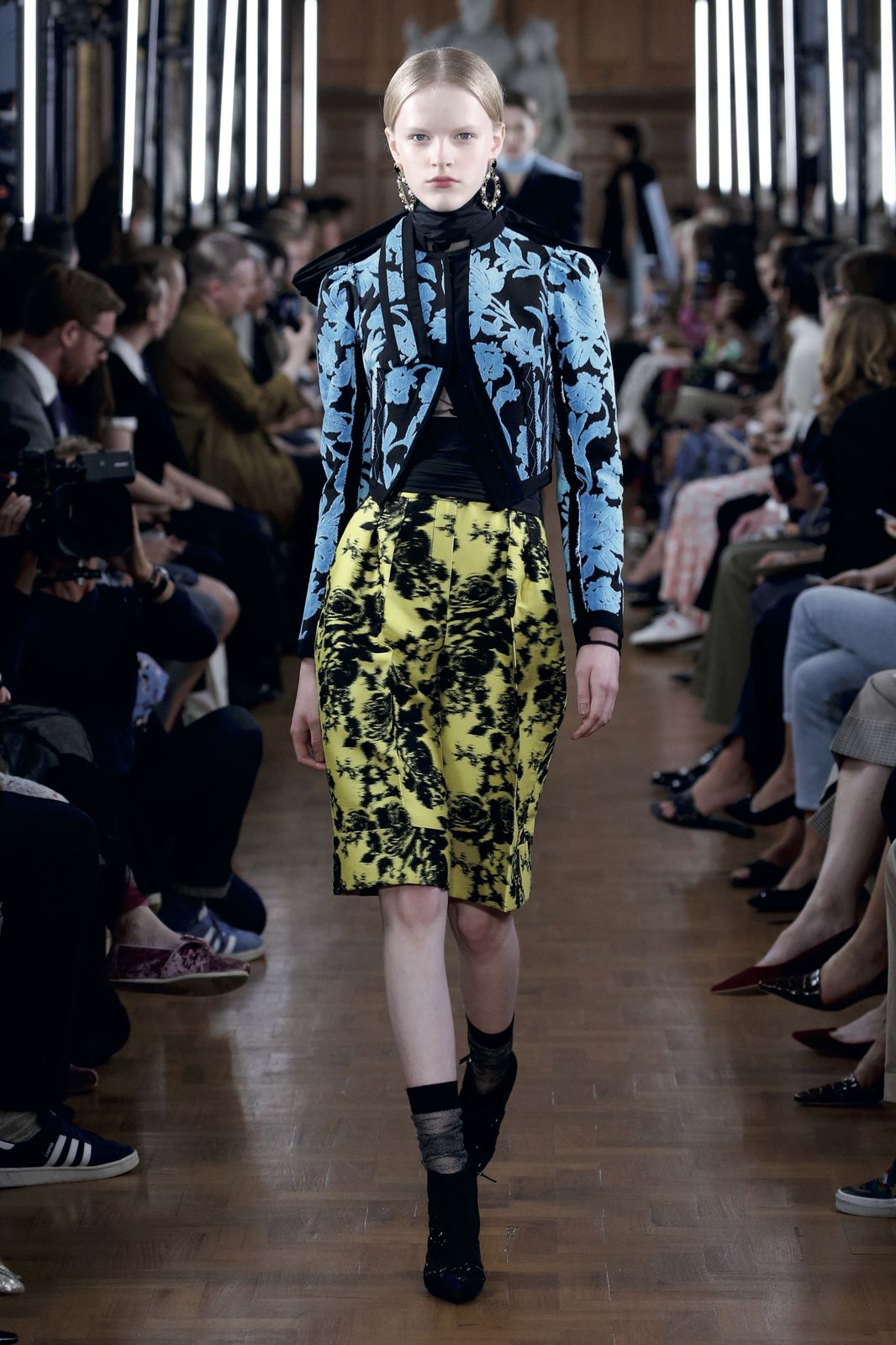 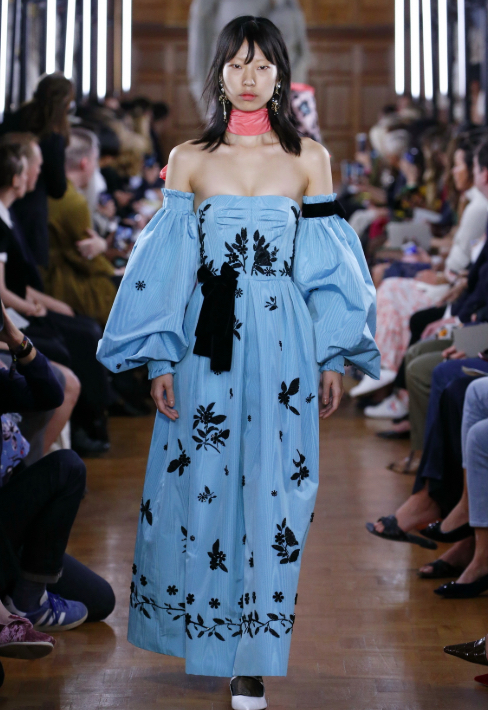 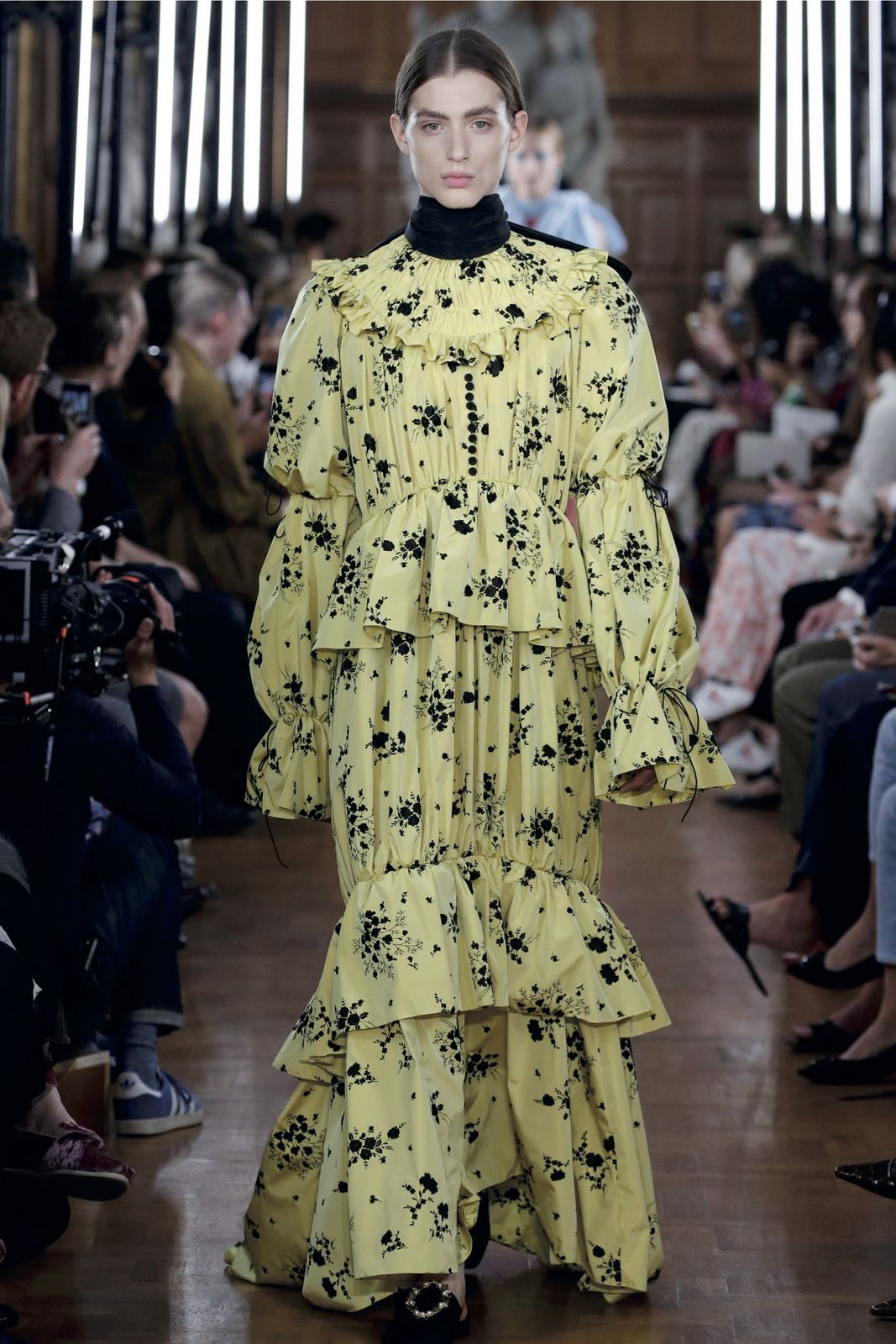 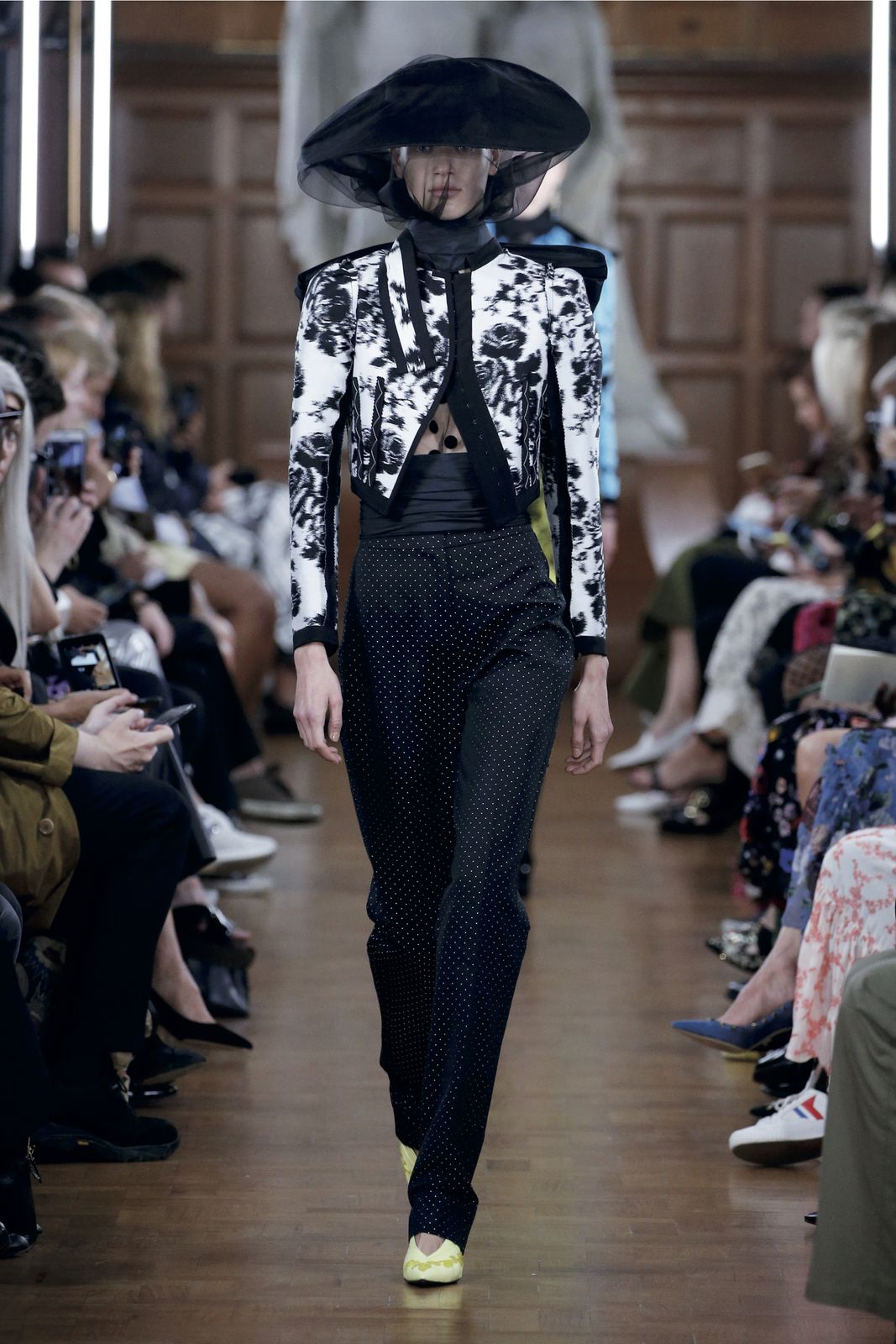 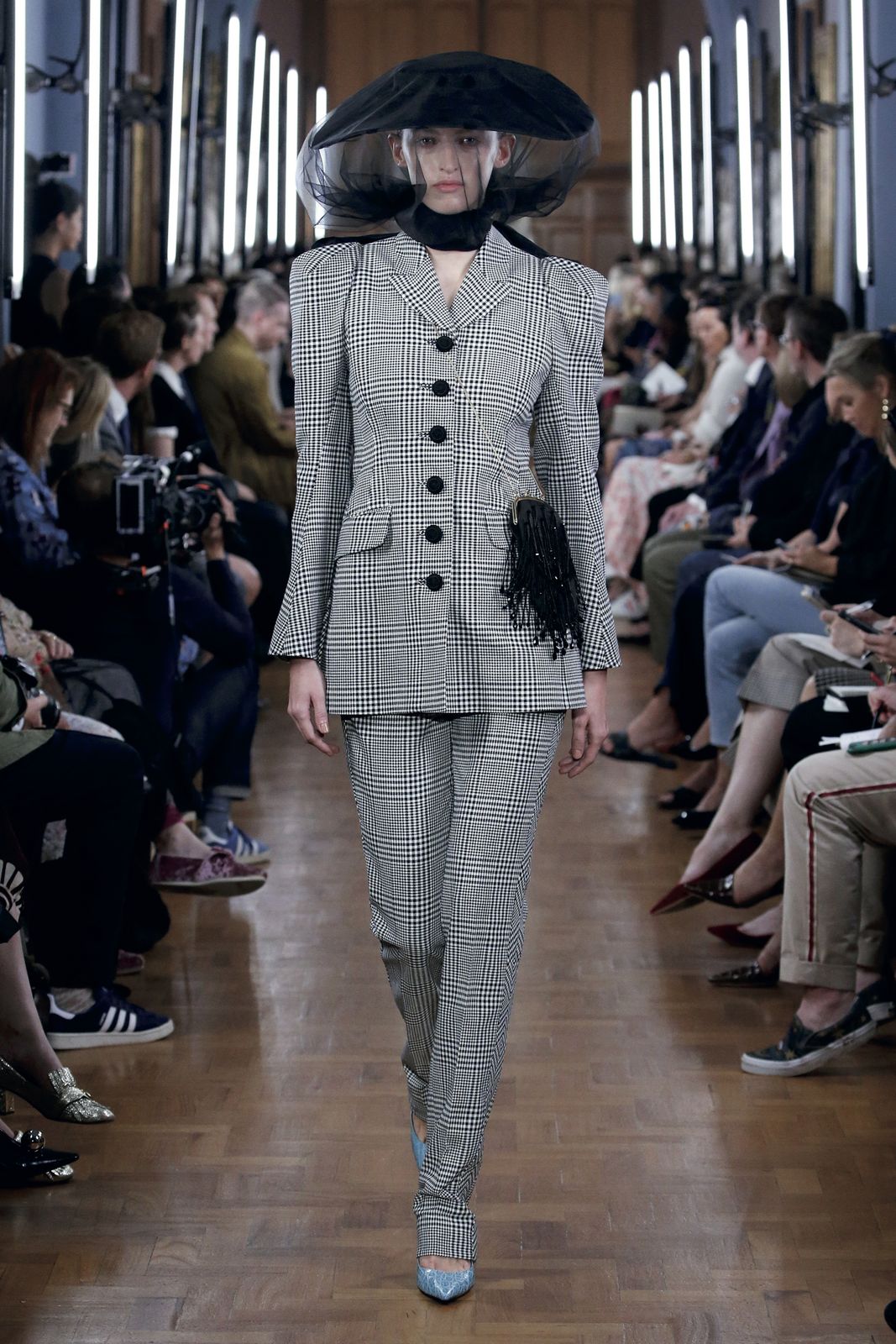 Yet, there is never a certain type of woman in his mind when he conceptualises a collection. His designs are driven by story, not customer. His work stands out because there is a dreamy, fantastical allure… without compromising on wearability. “When something is well designed, it should work on different women,” he points out, observing that the smallest detail, such as side pockets, can make all the difference.
In fact, he considers how his dresses respond when the wearer leans over a table or gets out of a car. Prioritising practicality has built him a thriving business, which is why he came to Singapore to meet customers at a trunk show in Club 21. “It’s the nicest compliment to see women here, in South Korea, Japan or France, places very far away from my studio, enjoy wearing my work.”
Moralioglu has dressed many celebrities, even royals, but it was an American politician, former Texas senator Wendy Davis (who stood for 13 hours in Congress to fight for the right of women to have an abortion), who impressed him the most. “She wore a simple printed dress, but I think she looked great,” says the man who champions the power of femininity. 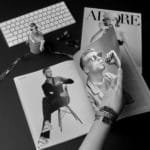 Talk to Me About:
Fashion