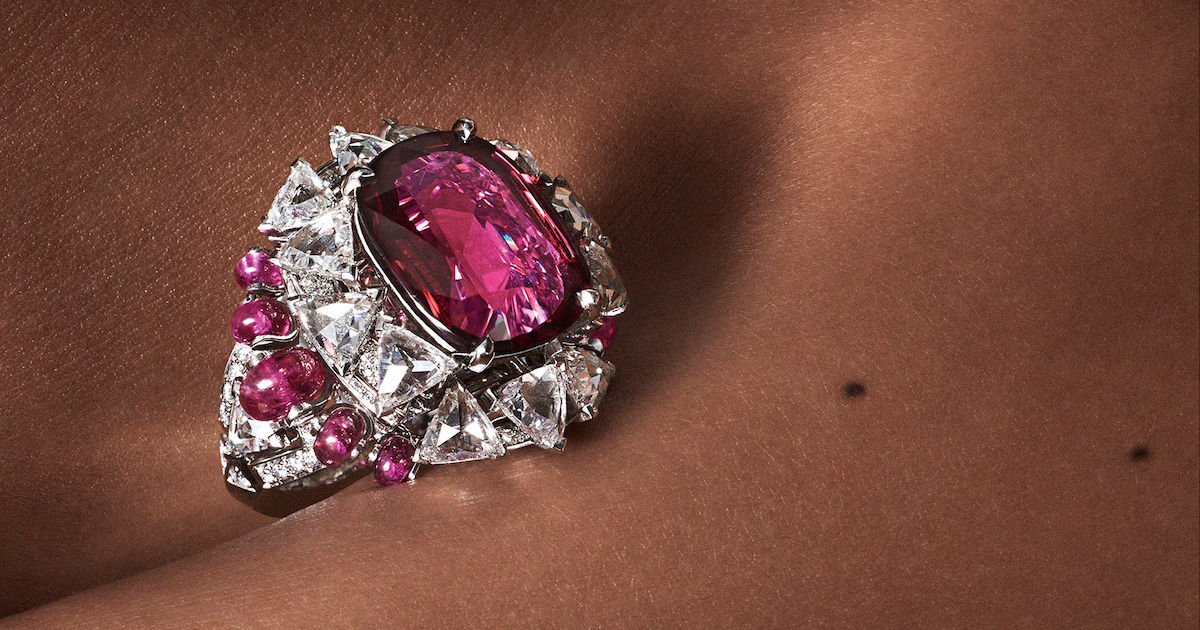 The Phaan ring: A skilful interplay of light

“This unique ring surprises, thanks to its remarkable ruby of rare vitality. Lightly raised, the stone dominates a precious architecture. This is how the magic works: Light filters to the heart of the piece and reveals the unexpected presence of a cushion-shaped rose-cut diamond. An illusion is created by the diamond, which gives depth and intensity to the ruby’s colour, fooling our senses.”
Jacqueline Karachi, creative director of Cartier

Each creation at Cartier begins with a unique stone – in this instance, a phenomenal 8.2-carat cushion-shaped ruby from Thailand that crowns the arresting Phaan ring in the Sixième Sens par Cartier High Jewellery collection. Like a muse of an haute couture atelier, the gem fuelled the imagination of an expert team of designers, jewellers and gem-cutters at the maison’s workshops.

Revered for centuries as the most precious gem, the ruby is in a league of its own in the jewellery realm and at Cartier, where it plays the major role in the house’s many high jewellery creations. However, achieving the richest hue in this gem through the perfect cut, without compromising its weight and value, is a tremendous challenge.

Appearances are deceiving here. A closer look reveals not one, but two tiers that compose the ring’s unique architecture. An audacious undertaking like this can only be executed by a maison such as Cartier that boasts unsurpassed savoir faire.

The simplicity of this creation masks a laborious and intricate construction in stages, which sees a 4.01-carat cushion-shaped rose-cut diamond placed just beneath the ruby.

Since research focused largely on the most appropriate technique to set the diamond under the central ruby, thorough studies on the volumes had to be done. This called for multiple mock-ups employed by jewellers as well as designers to ensure the viability and stability of the arrangement of gemstones.

The addition of polished ruby beads and triangle-cut diamonds in different sizes contributed to the complexity of the assembly. As it was imperative to maintain the jewel’s airy aesthetic from an aerial view, the additional gemstones had to be positioned at varying heights around the piece and in between the subtle openwork. This allowed the centre diamond to capture light and illuminate the ruby from within. The unorthodox setting also served to further intensify the ruby’s luscious red tone.

Just as applying standards of excellence and quality are rigorously controlled at every stage, Cartier is committed to responsible practices and sourcing through the Responsible Jewellery Council, which has expanded its certification process to include coloured stones such as rubies. It is also through the Coloured Gemstones Working Group, of which Cartier is a founding member, that the maison endeavours to promote the development of better practices in the jewellery industry.

“This ring is inspired by frosted flowers. Its slightly drooping corolla is crystallised with sparkling snowflakes, magnified by a composition of diamonds in various cuts, such as rose, hexagonal and triangle. This play of forms gives the piece its uniquely geometric structure and enhances the effects of the sparkle.”
Jacqueline Karachi

Assembling a multitude of diamonds of varying shapes in such harmony was the first major challenge faced by the workshops. For instance, setting delicate, sharp points of triangular stones required a technique and skill that can only be accomplished by Cartier’s best craftsmen. To maximise the intensity of light reflecting from the diamonds, the artisans took pains to reduce the gaps between the stones throughout the production process, so that the platinum structure remains perfectly hidden.

The result is a composition of brilliant- and rose-cut diamonds in hexagonal, octagonal as well as triangular shapes that fit together with extreme precision to reveal a slightly curved corolla that appears as if it’s been crystallised by sparkling snowflakes.

On the top of the ring, diamonds are set in a motif akin to the view in a kaleidoscope. This adds to the ring’s graphic aesthetic, while allowing every stone to dazzle from all angles and impart exceptional luminosity to the piece.

To enhance the sparkle of the central 2.55-carat rose-cut diamond representing the heart of the bloom, Cartier designers created a complex new setting by placing another 0.51-carat brilliant-cut diamond within a hexagonal motif below it in an inverted pavilion setting.

A surprise awaits on the underside. The design incorporating this unexpected second stone mirrors the geometric motif on top – highlighting the great finesse of the ensemble and Cartier’s unrivalled technical mastery.

“Stemming from an impressive 20.51-carat sapphire cabochon are waves paved with diamonds and emeralds extending in ‘echoes’. This effect of movement is amplified by blue, green and black – a palette that uses its own contrast to enhance the optical illusion.”
Jacqueline Karachi

A play on visual perceptions with a unique form, the Parhelia ring is one of the most enigmatic pieces in the Sixième Sens par Cartier High Jewellery collection.

The maison’s singular style is expressed through the harmony of polychromatic stones on this incredible jewel. Featured in many Cartier creations since the beginning of the 20th century, the sensual and flamboyant combination of blue and green – known as the peacock motif – was the brainchild of Louis Cartier, who drew inspiration from Islamic arts, as well as the costumes and decorations of the Ballets Russes – a renowned Paris-based travelling dance troupe from the early 1900s comprising prominent Imperial Ballet dancers.

Initially an experiment, the unconventional combination of sapphire and emerald – perceived as jarring in Europe at the time – was testament to Cartier’s bold, creative vision. The two colours have been inducted into the maison’s emblematic palette since, and continue to be interpreted in a wide range of nuances to this day.

It is impossible to take your eyes off the main 20.51-carat sapphire with a saturated blue – a hue associated with the divine and immortal since ancient times. Lending contrast to this cabochon’s rich colour are diamonds and buff-top emeralds set in five platinum “parentheses”. Tilting lightly downwards, each one unfurls like a ripple breaking a lake’s surface. Black lacquer punctuates the exterior lines, creating a shadow effect and reinforcing the illusion of a fluid movement.

Precious kinetic waves are seen “reverberating” to either side in halos that emanate from the sapphire. The ring’s length extends across three fingers with slightly flexible tips to ensure comfort when worn. This commanding piece is also modular: Its main motif can be detached from the ring to transform into a brooch resembling an Art Deco-inspired bow tie.

This story first appeared in the January 2022 issue of Prestige Singapore.