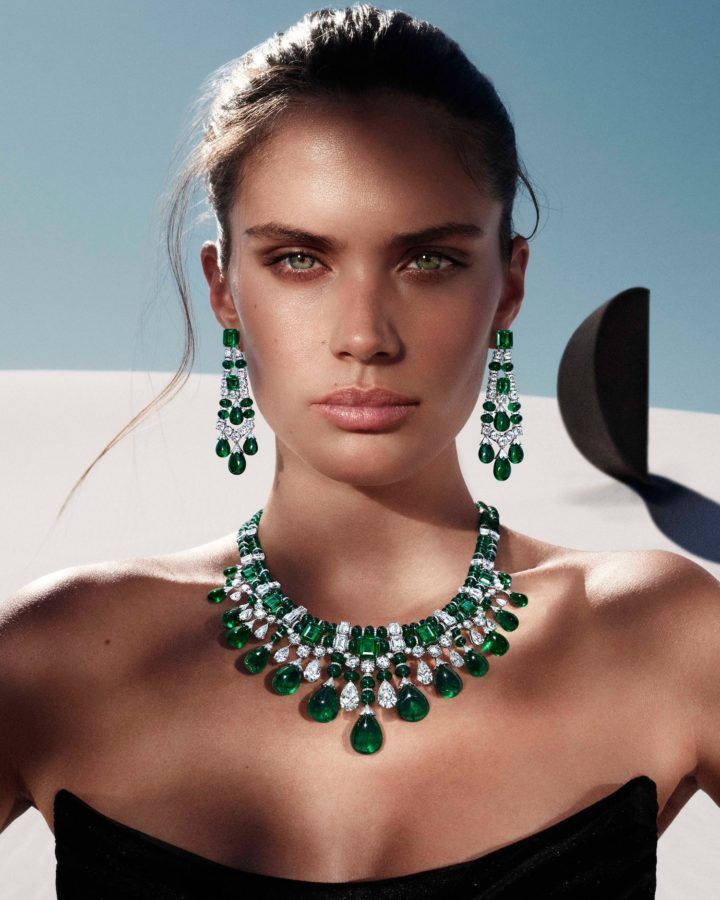 Out on the Atlantis Dunes in South Africa’s Western Cape, Portuguese supermodel Sara Sampaio poses in front of fashion photographer Mikael Jansson for the campaign shoot of Graff’s new and stunning Tribal jewellery collection. Looming over her dramatically are specially created large-scale, blackened steel sculptures, whose elemental shapes and symbols are central to this line.

There’s no denying the magnetism of the jewels, which are inspired by the ancient African folk tale of The Girl Who Created The Stars. Describing the origin of the Milky Way galaxy, it’s a story of how a girl magically turned glowing embers into stars by tossing them high into the night sky. The human fascination for the celestial bodies is as old as our love for all things that emanate life and light in the dark, such as the gleaming diamonds and coloured stones showcased here.

Case in point: the showpiece high jewellery necklace, which is set with 418 carats of emeralds and 76 carats of diamonds. Its sensuality, vibrancy and strong tribal aesthetics are the result of the beautiful combination of shapes and cuts, complemented by the contrast between the emeralds’ intense green and the diamonds’ mesmerising sparkle.

Represented in this contemporary collection are the three striking, sculptural motifs of Graff Gateway, New Dawn and Night Moon – each a sub-collection. The abstract ovals of the Graff Gateway link the past and the future, the earth and the stars, symbolising a new beginning and endless possibilities. Highlights include a Graff Gateway parure featuring pear-shaped diamonds, a magnificent diamond choker, and other contemporary creations with rows of Graff Gateway motifs and dynamic diamond fringes.

New Dawn achieves the illusion of an explosive sunburst through the use of multi-shaped diamonds, evoking the beauty of a sunrise breaking over the horizon. Scintillating white and yellow diamonds hold sway here, imparting life, power and energy to masterpieces that include a resplendent necklace, a 5.31-carat fancy vivid yellow oval diamond ring and a 12.5-carat fancy vivid yellow radiant-cut diamond ring.

The sense of calm and clarity conjured up by gazing at the moon is encapsulated by the Night Moon motif. A perfect half-moon formed by clusters of round and pavé diamonds, it works in both elaborate or minimalist designs, whether it is an intricate necklace, or a bracelet or ring bearing clean lines. Bold and imaginative, Graff’s Tribal collection is a masterclass in storytelling through the language of jewellery.