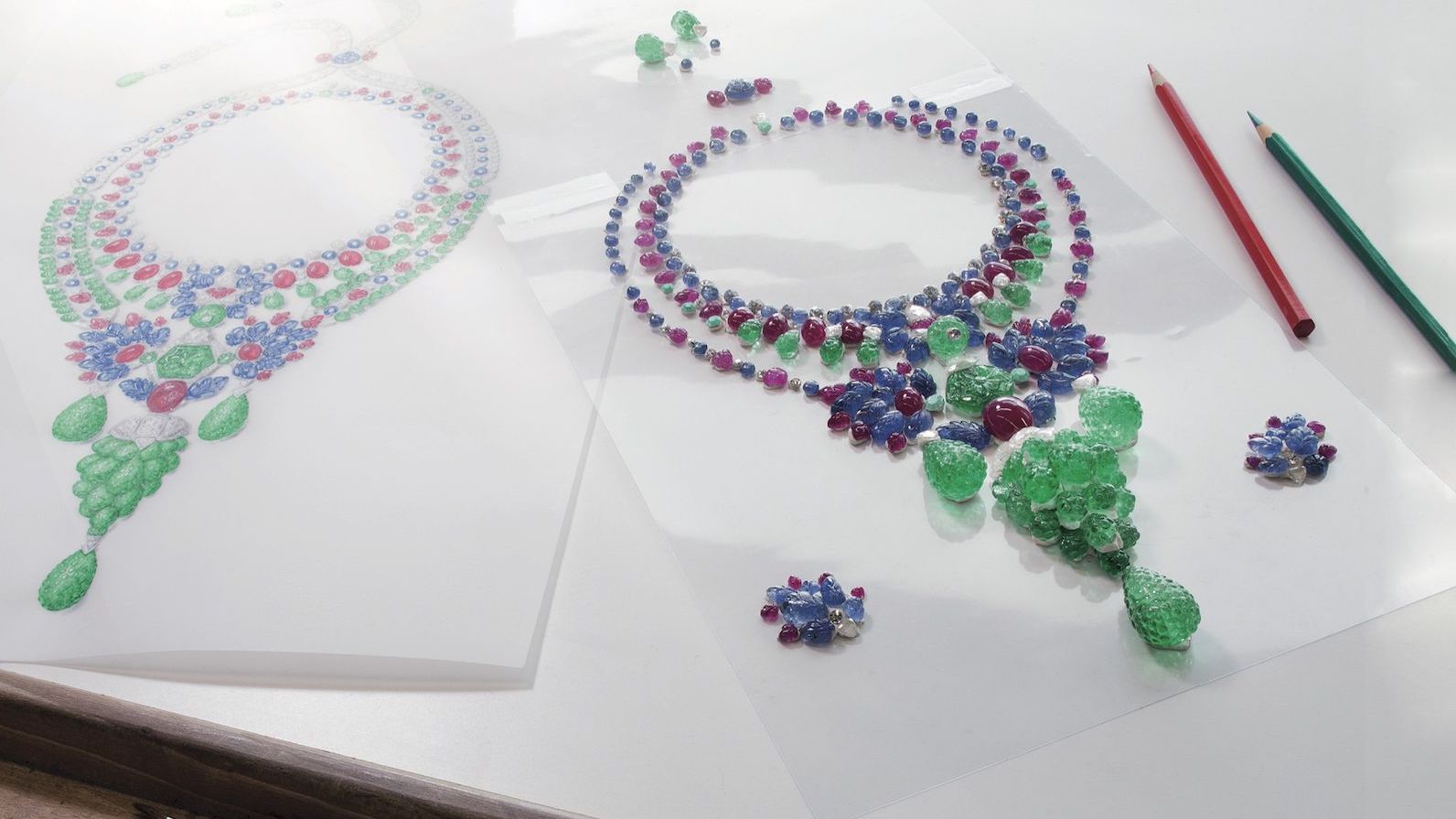 How the Tutti Frutti designs became a signature Cartier style

In 1911, Jacques Cartier boarded the Polynesia and set sail on his first voyage to India. His trip coincided with the with a two-week-long spectacle known as the Delhi Durbar, which celebrated the coronation of George V as Emperor of India. Taken by the richness of the Indian civilisation as well as its jewellery culture of vibrant colours and traditional craftsmanship of cabochons set in local designs, the Parisian jeweller soon sought out established gemstone merchants in Bombay, Calcutta and Delhi.

The Mughals indulged their love of adornment and precious gems in the imperial workshops of Rajasthan, where skilled Indian artisans employed unique techniques in relief cutting and hollowing out emeralds, sapphires and red spinels, which were also known as “Balas rubies”.

Brown diamonds are the next jewellery trend to watch
Style

An Indian love affair
The trip also led Cartier to cultivate contacts with a few maharajahs across the subcontinent, from Kapurthala to Mysore. Fabulously rich with an insatiable appetite for opulent jewellery, they were fascinated by the Parisian styles Cartier presented them. It wasn’t long before the maison became the favoured jeweller of Indian royalty, resulting in many flocking to Paris to entrust the house to reset and design the extremely precious jewels from their vast treasuries.

The Art Deco period saw a close bond between Cartier and India being forged. Two types of jewellery designs were the product of this relationship. The first was redesigned Indian gems in the Western style of Cartier for the maharajahs, while the second was the India-inspired pieces presented to the maison’s Western clientele.

The latter, an exotic reinterpretation of traditional Indian jewellery, was met with rapturous reception throughout the period, mostly appealing to a refined clientele with an inclination for arts and fashion. As described in the Cartier archives, foliage jewellery broke with the fashion of the day. Carved gems in a whimsical riot of hues went against conventions of jewellery designs of the time, reigniting the Europeans’ taste for floral motifs. This led to the birth of Tutti Frutti, a style that would eventually become one of the major elements in the Art of Cartier.

The rise of Tutti Frutti
The craze got a firm hold on the wife of the Viceroy of India, Lady Mountbatten (1901-1960), and also fashion icon and socialite Daisy Fellowes (1890-1962), who was the daughter of Duke Decazes and sewing machine heiress, Isabelle Singer. Both women became ardent patrons of the unique jewellery style. Lady Mountbatten acquired a bandeau tiara made by Cartier London that could be transformed into two bracelets. The historic piece adorned with emeralds, rubies and sapphires has been housed in the Jewellery Gallery collections of the Victoria and Albert Museum since 2008.

In 1936, Fellowes commissioned Cartier to create a stunning “Hindu” necklace. Embellished with leaves of ruby, emerald and sapphire, the necklace boasted incredible suppleness, thanks to an articulated platinum structure. She most famously wore the extraordinary necklace to what was hailed as the “ball of the century”, hosted by Carlos de Beistegui at Venice’s Palazzo Labia in 1951. The magnificent necklace has since joined other exquisite pieces in the Cartier Collection that tours the world’s finest museums.

Termed “savage” jewellery in those days, it was only in the 1970s that the creative vein formerly known as “Hindu” was renamed Tutti Frutti. By then a Cartier signature, it was patented by the maison in 1989. An icon of Cartier style, Tutti Frutti continues to inspire its High Jewellery collections to this day.

The legacy continues
Created in 2016, the Rajasthan High Jewellery necklace is named after one of the most splendid states of the Mughal Empire. Taking 5,220 man-hours to complete, it is the largest High Jewellery necklace ever produced in the Tutti Frutti style. At the heart of the piece, which can also be worn as a brooch, is a spectacular 137.97-carat carved Colombian emerald bearing a slightly convex cushion shape and engraved with an intricate floral design.

The choker comprises 46 melon-cut emerald beads sourced from the Panjshir mines of Afghanistan. The modular bib, which can be worn three ways, is composed of rubies, sapphires and emeralds carved in organic forms and engraved with floral motifs as well. A matching ring with a 20.44-carat engraved Afghan emerald bead, brilliant-cut diamonds as well as engraved rubies, sapphires and emeralds completed the set.

As a homage to such great ceremonial necklaces worn by Indian nobility, Cartier in 2019 created the Maharajah necklace, which is set in accordance with ancient Indian jewellery-making techniques. Embellished with an exceptional assembly of emeralds, it showcases masterful cutting work and a dynamic composition in which colour contributes rhythm and tempo, like the notes of a musical piece.

The remarkable creation also perpetuates the great Cartier tradition of transformable jewellery, revealing eight ways of wearing the necklace and two variations for earrings. Extremely rare in Cartier High Jewellery, the engraved emeralds are set in a cluster that ends in a voluminous tassel of 19 gemstones. The ensemble is completed by two emeralds totalling 86.96 carats and a 43.73-carat central stone. All sourced from Colombia, they flaunt stunning colour, brilliant intensity and delicate crystallisation. Accompanying them are an 18.58-carat engraved hexagonal Zambian emerald, a 23.24-carat engraved Burmese ruby and eight Burmese ruby cabochons weighing 46.34 carats.