The Latest Collaboration Between Roger Dubuis and Lamborghini 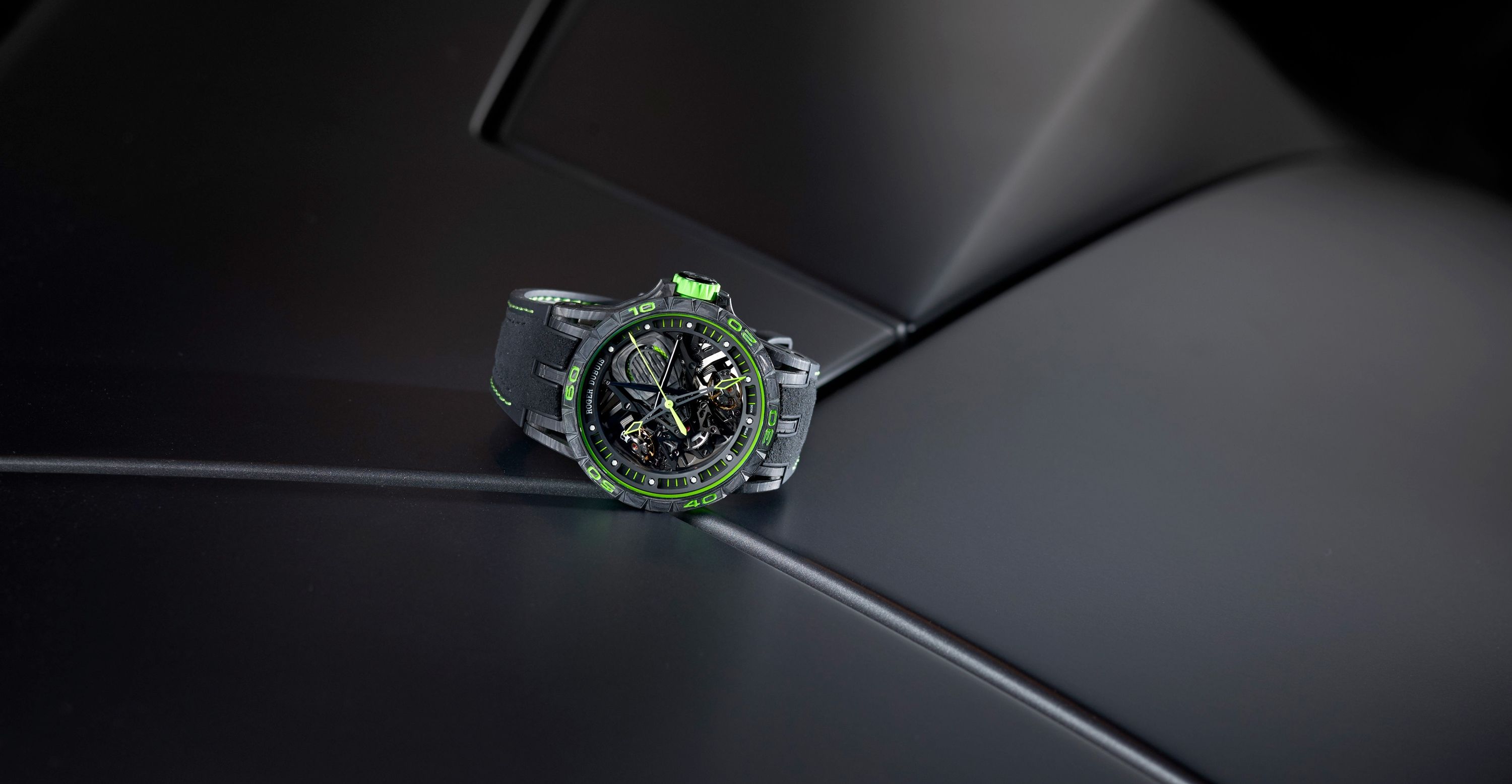 At the start of each year, Salon International de la Haute Horlogerie (January) and the Geneva International Motor Show (March) are the venues of a litany of dazzling debuts. This year, Roger Dubuis, known for intrepid complications like its skeleton double flying tourbillon and Hommage Millésime pocket watch, and Lamborghini Squadra Corse, a championship supercar builder with its own dedicated museum, unveiled a veritable head-turner.

Secured to the wrist by a black bi-material Excalibur Spider Pirelli strap (Pirelli is a long-time Lamborghini partner) accentuated by a neon green Pirelli thread profile, the Excalibur Aventador S Green RD103 that was rolled out at the Geneva International Motor Show 2018 is armed with five unique innovations for which patents have been filed.

Just like how sports cars are repeatedly thought through and have their components minimised to reduce their overall mass, this eight-piece limited-edition timepiece’s Weight-Reduction Mechanism with distinctive power reserve has had an entire gear train removed in the name of greater chronometric efficiency.

What’s more, the Autonomous Stability Program (ASP) from the world of supercars was also applied to the Excalibur Aventador S, so that a more accurate average of two non-resonant balance wheels (“balanciers non-resonants”) could be achieved.

The watch is equipped with the Double 45° V-Shape Balance Wheel to compensate for the debilitating effects of gravity on a movement’s accuracy; it also reflects the geometry of high-performance V10 or V12 engines. The Excalibur Aventador S is further equipped with a Quick Friction Optimisation, which ensures that each toothed wheel is adjusted to minimise energy lost when its barrel drives its regulating organs, as well as by its G-force Anti-Ejection Reinforcement, a motor racing innovation that uses a cotter pin cap (“bouchon de clavette”) to self-lock each nut and bolt.

Complementing these five engineering firsts, the Excalibur Aventador S also brandishes a jumping seconds mechanism that makes for a more thrilling indication of time. Safeguarded within a fluted titanium black DLC skeletonised case that is over-moulded by Pirelli’s championship-winning rubber, these ground-breaking feats of engineering reflect the relentless pioneering spirit of Monsieur Roger Dubuis and certainly do the recently departed watchmaker extraordinaire proud.