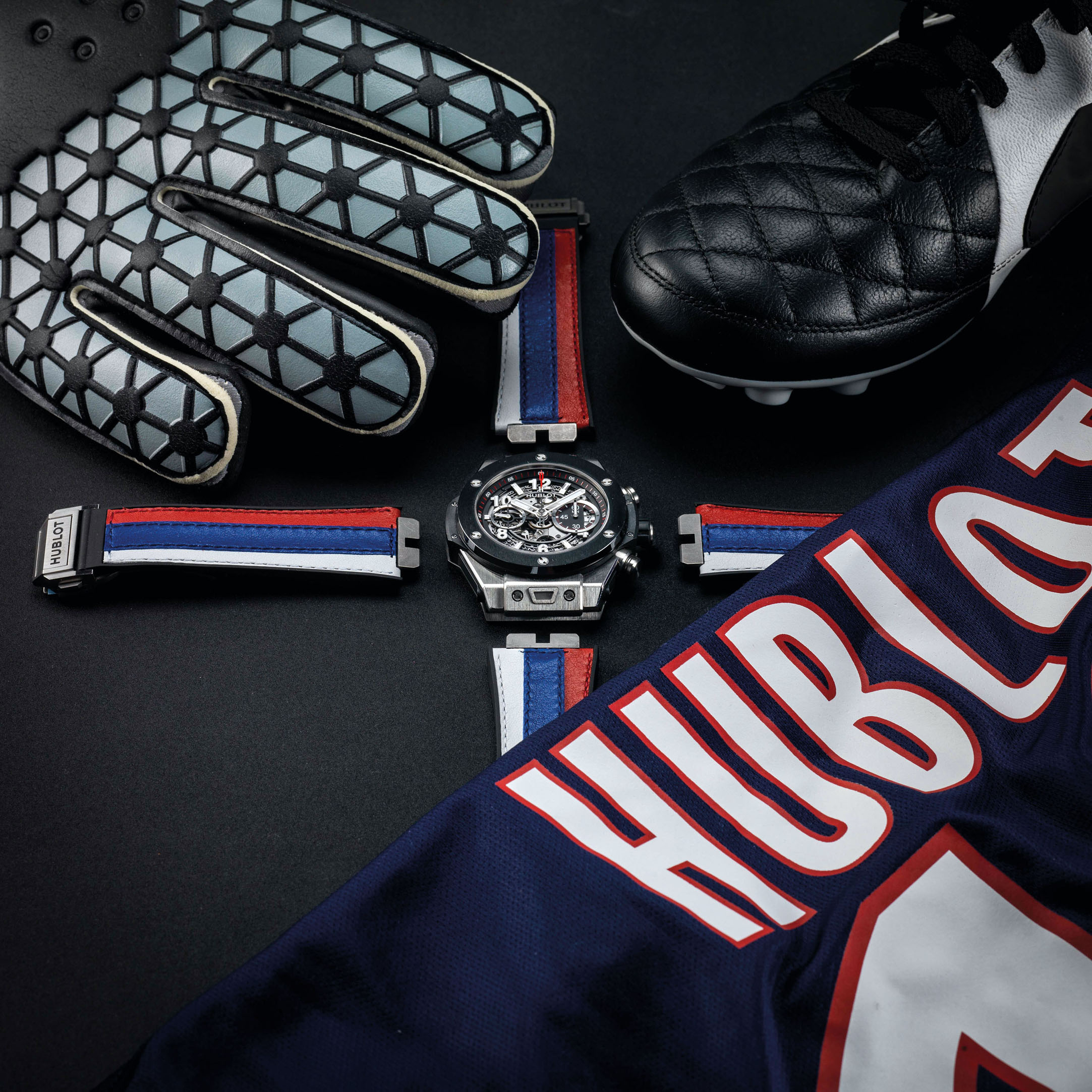 A look at Hublot’s football alliance

Style
A look at Hublot’s football alliance
Share
Next article

Few moments are as emotionally charged as the victorious roar of a 50,000-strong crowd rallying behind a home team. And there in Krestovsky Stadium, we were right in the middle of it, witnessing the exciting first play-off of the FIFA Confederations Cup between host nation Russia and New Zealand, winners of the 2016 OFC Nations Cup. Seated among patriotic football fans young and old, and some 200m away from Russian president Vladimir Putin, everyone was in a deliriously heightened state of being as the score edged in favour of the Russians. This is what soccer does to people. And having been part of this soccer mania for some 11 years, Hublot fully understands the allure of the sport.

It seemed implausible that prior to 2006, soccer, the world’s most watched sport, had no links to any luxury brand. Tennis, golf and motorsports were supported by several big names “But in soccer — there was nobody,” as pointed out by Ricardo Guadalupe, CEO of Hublot. An opportune meeting between then-CEO (now President of LVMH Watch Division) Jean Claude Biver and Michel Pont, former assistant coach of the Swiss national football team, changed all that: In spite of Biver’s initial reticence, 2006 saw Hublot become the first watchmaker and luxury brand to enter the football stadium.

The alliance of two Swiss entities was a perfect union. In that same year, all 60 members of the Swiss team donned the Hublot Big Bang ASF (Association Suisse de Football) limited-edition watches when they went to Germany for the World Cup.

A knack for successfully aligning itself with the right partners became part of Hublot’s recipe to success. It adheres closely to “The Art of Fusion” motto, a philosophy upon whch it has built its business and brand. Although this ethos is more commonly applied to the brand’s prowess over material science and alchemy, resulting in proprietary materials such as Magic Gold (a combination of ceramic and 18k gold; also the world’s first scratch-proof gold) and Hublonium (an alloy of aluminium and magnesium), it also refers to the rewarding partnerships that continue to shape the brand’s identity. Linking luxury timepieces with soccer may be unchartered territory but for Hublot, it turned out to be the golden ticket to its rapidly growing popularity.

In 2007, barely a year after it signed on with the Swiss football team, Hublot chose to deepen its commitment to the sport by signing on as the Official Timekeeper for UEFA Euro 2008. In addition to having its logo on timekeeping scoreboards, the watchmaker also produced a limited-edition watch to commemorate its official role at the tournament. “Our goal was to create brand awareness through football: We talked to billions of people who eventually learned that Hublot is a watch brand. They might not be able to afford to buy the watch but at least they knew it was a watch brand,” says Guadalupe.

Over the next few years, Hublot’s branding became synonymous with football. It was the first official timekeeper for the FIFA World Cup 2010 in South Africa and served as the official timekeeper for several top-notch football clubs, the first of which was Manchester United. The multi-year and multi-million pound partnership deal made in 2008 between Hublot and the Red Devils led to a series of limited-edition watches with cool features such as a 45-minute counter (the duration of a half-match) as well as hour markers embedded with actual blades of grass from Old Trafford. Other clubs that Hublot has aligned itself with include Bayern Munich (2012), Juventus (2012), Paris Saint-Germain (2013) and Chelsea (2015); each with their own series of limited-edition watches.

The brand’s unwavering commitment to the sport reaped its biggest reward at the 2014 FIFA World Cup in Brazil, when FIFA allowed Hublot to redesign the referee boards into the familiar shape of the Big Bang, complete with its brand name, the recognisable bezel with “H” screws, and the protruding case accents. That was the first time in FIFA’s history that the format of referee boards were adapted to the requirements of a sponsor — and it  became Hublot’s most invaluable marketing tool.

“The new referee board made it easier for consumers to make the link between the watch and the brand. We had 21 minutes of visibility during the World Cup and this was seen by billions of people. We’re talking about hundreds of millions in advertising returns that we could never afford if we were to do it in every country,” says Guadalupe.

The appointment of legendary football player Pelé as a brand ambassador came also in 2014. Widely regarded as the greatest football player of all time, Pelé has won three FIFA World Cups and once held the title as the highest-paid athlete in the world when he was playing. The Brazilian is hailed as a national hero and was an obvious choice as ambassador because of his glorious accomplishments in the field as well as his support for humanitarian causes. “When we appoint ambassadors, we want legends who have succeeded in their field. To me, a legend is someone who has done everything and achieved everything, unlike active players who have not completed their careers. A legend is really undisputable — he is someone loved by both the football players and fans. Pelé is also someone associated with values of generosity and humility. He is passionate about the sport and I think that corresponds well to the brand,” explains Guadalupe.

At the FIFA Confederations Cup this year, Pelé joined Hublot in Russia to start the one-year countdown to next year’s FIFA World Cup, where Hublot will mark its third term as Official Timekeeper. The watchmaker also used the occasion to road-test a watch designed to benefit referees at next year’s World Cup. Although a few close-up pictures of what looks like a smartwatch have surfaced on various online watch forums, Guadalupe remains tight-lipped about this exciting development. “All I can say is that we are testing it by putting some watches on the referees at this year’s Confederations Cup. At the FIFA World Cup next year, the referees will wear a Hublot watch that incorporates goal line technology,” he reveals.

Hublot’s deeply entrenched relationship with football has also led to a sense of responsibility to improve the sport. It has used its official timekeeper status to support anti-racism campaigns and contribute to fundraisers and social initiatives that benefit the community and the sport. In 2014, together with Pelé, it helped build a concrete football pitch in the Jacarezinho neighbourhood in Rio de Janeiro; similar plans to lend a helping hand to needy local communities are underway as the brand prepares for Russia next year. “We try to cover a social aspect in all our partnerships and we’re going to do something next year in Russia…We are working with the FIFA to do something different but that’s dedicated to youths and linked to football,” Guadalupe says.

From being its biggest marketing ally to becoming a test bed for the watchmaker’s avant-garde technology, football will soon play an important role in Hublot’s strategy to penetrate the China market, currently one of the biggest consumers of watches. With China’s football-mad President Xi Jinping publicly declaring his intentions for China to host the FIFA World Cup in 2030, Guadalupe sees this as an avenue to woo and conquer the Chinese market.

“China is an important market for the watch industry but because Hublot is a young brand, we are still not at the level of recognition that we should be. I see potential for us…I believe that our partnership with FIFA will speak, in the future, to the Chinese consumer.”

From a natural and strategic coalition between two Swiss entities to a symbiotic marriage celebrated on a global scale, Hublot’s relationship with football has certainly evolved tremendously.

“Brands think that football is only popular with people who cannot afford to buy watches — that is not true. When we started, we thought there might be an opportunity for us to really create something through a platform of communication that’s not been used by other luxury brands. It was a good opportunity and a good idea that 10 years later has also proven to be successful and very efficient,” says Guadalupe.