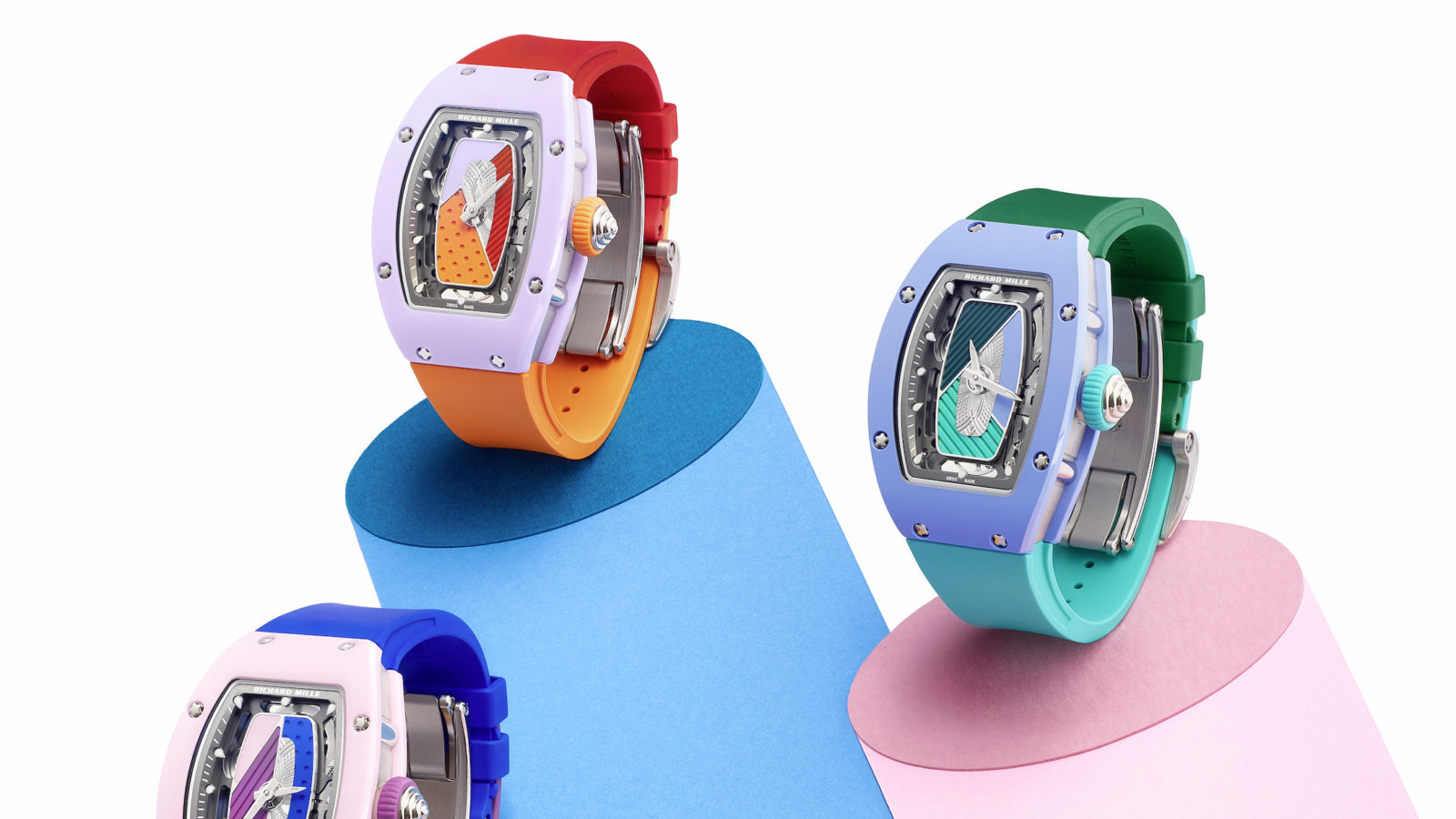 10 new watches to wear this month

Style
10 new watches to wear this month
Share
Next article

From sea-inspired colourways to quartz-powered timepieces and more, here are ten of our favourite new watches to wear this month.

For a purported “racing machine on the wrist”, Richard Mille’s latest novelty, the RM 07-01 Coloured Ceramics, is unusually playful. Although the ladies’ capsule boasts the hi-tech materials and construction methods you’d expect from the Maison — you’ll have fun telling friends the skeletonised movement is in micro-blasted grade 5 titanium, while the front and back bezels are made from Tetragonal Zirconia Polycrystal — the Pastel Blue, Pastel Pink and Pastel Lavendar colour schemes, and the “part-botanical, part-sunburst and part-Art Deco” dials are delightfully whimsical. This late summer stunner comes in a limited run of 50 pieces each.

Breguet’s feminine Reine de Naples 8938 comes in two new versions. Especially flamboyant is this model in rose gold, with 3 carats of diamonds on the snow-set dial, bezel, lug and crown, an offset hours chapter in mother-of-pearl and self-winding rotor in — what else? — platinum.

Inspired by the Côte d’Azur and first created in the early 1970s, Baume & Mercier’s Riviera has been re-interpreted for 2021 in radiant greens, a darker hue for men (in a 42mm case and automatic movement) and a lighter shade for women (in a more petite 36mm size with quartz calibre). Both feature a satin-finished wave pattern dial, as well as easily interchangeable rubber straps that match just about any summery mood.

Harry Winston’s Emerald ladies’ watch collection has been enlivened by four new models, each in a vibrant colour: turquoise, orange, champagne or, shown here, violet. Each quartz-powered timepiece comes in a white-gold case set with 53 diamonds and all feature a coloured dial and matching cabochons in mother-of-pearl, set with a further 20 diamonds. A matching satin double-tour strap completes the ensemble.

Although a 42mm case is on the large side, we can still see the ladies queueing up to get their hands on Hublot’s Big Bang Unico Summer. No, it’s not in ceramic as you might have suspected but anodised aluminium, which is not only lightweight but also gives a gorgeously metallic glint to a shade that’s said to be inspired by the colours of a Pacific lagoon. As just 200 are being made — and are available only at [email protected] — if you want this seasonal stunner on your wrist you’d better move fast.

Earlier this year we brought you news of the tie-up between Bell & Ross and the Patrouille de France display team of the French air and space force. Well, here’s the first fruit of the collaboration, in the form of the new BR 03-94 chronograph, which bears the squadron insignia on its handsome blue dial. Available in just 500 pieces, the watch is powered by an ETA-based automatic calibre, though interestingly the team’s pilots will receive an otherwise identical quartz edition.

Tag Heuer’s Aquaracer has been a default dive watch choice for some four decades. The latest 43mm professional 300 iteration brings the watch bang up to date with new materials — including grade 2 titanium and ceramic rotating bezels — dial colours and ergonomic features.

Until now, the ultra-exclusive British car-maker Rolls-Royce has resisted collaborations with watch brands, but its recently announced tie-up with Bovet 1822 could hardly be more logical. The first result is a pair of astounding his-and-hers tourbillon timepieces, which are designed either to be worn on the wrist or slotted into a dashboard housing on the one-off Rolls-Royce Boat Tail — one for the owner and the other for his wife.

Cool and relatively understated for what is, after all, a 43mm watch, the new MB Savanna is the latest offspring of Bremont’s long-term association with aircraft-ejection-seat manufacturer Martin-Baker. Designed to withstand the extreme G-forces generated when ejecting, the Savanna is a classic pilot’s watch featuring twin crowns, an internally rotating bezel, a black and yellow loop device on the central second’s hand and a desert-inspired sand colour for both dial and case.

With Breitling wrapping up its partnership with Bentley after almost 20 years, the Swiss watch brand is striking up a relationship with another British automotive brand — and this time it’s moving from four wheels to two. In a tie-up that’s described by both parties as “long-term” Breitling will now be working closely with motorcycle manufacturer Triumph, whose products will feature prominently in the watch brand’s showrooms — and doubtless vice versa. Although the two sides have nothing concrete to show quite yet, both say they’re working hard on cross-branded watches and bikes, with first reveals scheduled for early next year.