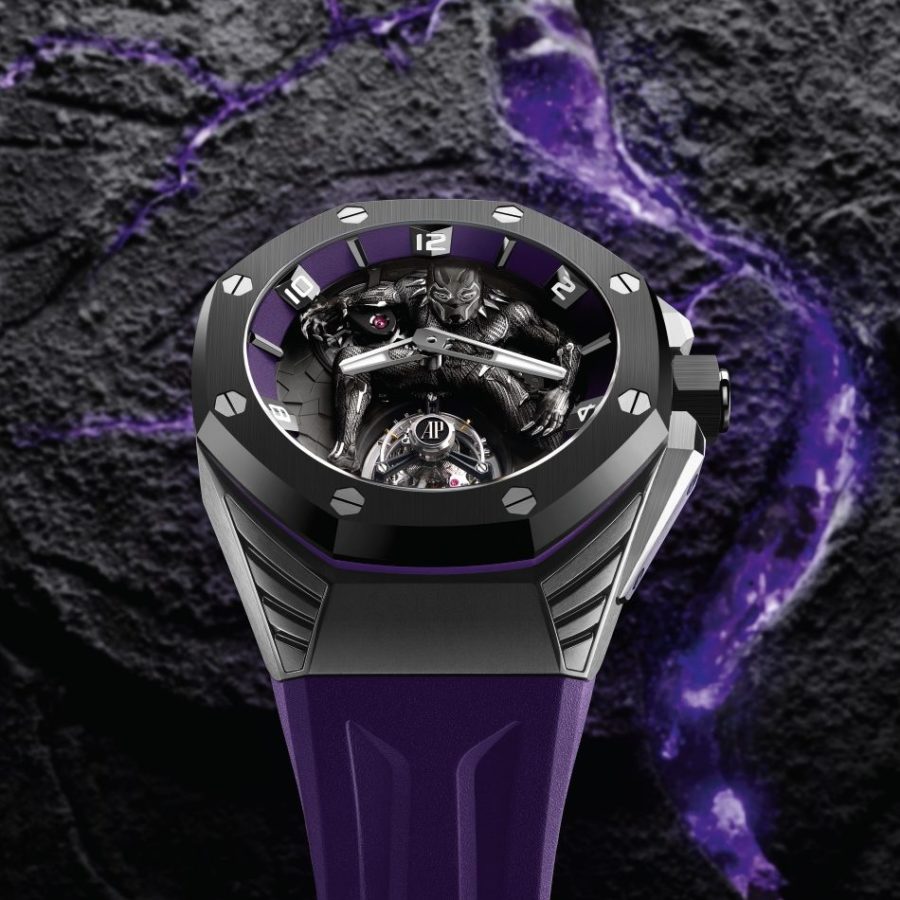 Audemars Piguet x Marvel: What we know about the collaboration watch

Style
Audemars Piguet x Marvel: What we know about the collaboration watch
Share
Next article

Ever since Audemars Piguet CEO François-Henry Bennahmias appeared with Don Cheadle in a virtual presentation to tease an upcoming Audemars Piguet x Marvel collaboration, the internet has been ablaze with what this could be. Was it a War Machine-inspired Offshore model? Or an Iron Man? Was it a unique piece? A limited-edition? The secret’s finally out and there’s much to unpack here.

Unveiled on Saturday, the collaboration watch is revealed to be a Royal Oak Concept “Black Panther”, featuring what is quite literally a detailed, hand-painted white gold effigy of the superhero on the dial, with a flying tourbillon complication at 6 o’clock. Beating inside the watch is the manual calibre 2965, ticking at 3hZ with a power reserve of 72 hours. The piece, a limited edition of 250 pieces, is presented in a newly redesigned 42mm titanium case with a black ceramic bezel on a purple rubber strap.

The announcement was made far from the remote valleys of the manufacture in Le Brassus, but instead, in a swanky star-studded event in the heart of L.A., hosted by comedic superstar Kevin Hart and featuring virtual appearances by friends of the brand, real-life superheroes you could say, from Serena Williams to Ian Poulter and even LeBron James.

A live auction even took place, with the highlight lot being the Royal Oak Concept Black Panther unique timepiece in white gold with a hand-engraved bezel and case that hammered for US$5.2 million, over 30 times the retail price of the standard model, setting a new highest record for an AP watch sold at auction. But it was all for a good cause — 100 percent of the proceeds went to charities First Book and Ashoka.

Right off the bat, and rather unsurprisingly (the internet is a harsh critic), the Black Panther watch immediately drew ire online, with people putting in their two cents regarding everything from the design to the delivery.

Design-wise, the watch was never going to appeal to everyone — there’s only a small percentage of people who would rock a superhero watch on their wrist. But to those who have seen the watch up close, there’s no denying the flawless execution of the engraving and finishing on the watch. Bennahmias had mentioned that his starting point was the Gerald Genta Fantasy watches of 1990s with the painted Mickey Mouse dials. The Black Panther isn’t far off in approach, and there’s little doubt that the outcome, although not subtle in the least, was probably what AP was going for in the first place.

But more than just a release of a Marvel watch, and possibly setting in motion a series of Marvel-related watches, the launch of the AP Royal Oak Concept Black Panther was significant in more ways than one.

While it’s not a complete departure from the brand’s core values and seemingly a natural evolution from Bennahmias’ own close ties with the entertainment industry, the launch has in a way established Audemars Piguet as the brand to the stars, officially worn by athletes and celebrities alike, now with a comic book franchise and Hollywood’s support to boot. It really isn’t every day you get to see such a star-studded line-up in a launch of a watch.

But more importantly, the Black Panther watch and the manner of its launch made it quite clear that there’s a shift in where Audemars Piguet has set its target demographic — the younger generation. This makes absolute sense as today’s buyers view Marvel the same way the last generation of buyers did with Mickey Mouse. There’s no doubt Mickey Mouse is an icon, a classic, and Marvel surely has that same enduring appeal.

If you think about it, taking risks has always been what AP does. No one had anything great to say about the Royal Oak when it first debuted in 1972 either and look where it is now. AP has already shown that it can do heritage, and do it justice. The launch of the [Re]master watch, the new museum, and the beautiful tome on all of its complicated wristwatches are some recent examples. But there’s also another part of AP, a part of its DNA really, that really just wants to do things differently, take risks, and offer a value proposition that’s uniquely their own. And no matter how you slice it, Audemars Piguet is still one hell of a fine watchmaking manufacture.

Which leaves us with this one last thought: is it possible for Audemars Piguet to open its arms to a whole new demographic while still keeping its brand equity with its longtime collectors? We’d like to think so.

More answers as to AP’s direction may be on the horizon, as we anticipate the follow-up to the Royal Oak Jumbo Extra-Thin Ref. 15202, now that the iconic reference is announced to be discontinued beyond 2021. If anything, the latest edition of the Ref. 15202 in platinum with the ombré green dial might be a telltale sign of bolder and more disruptive things to come.