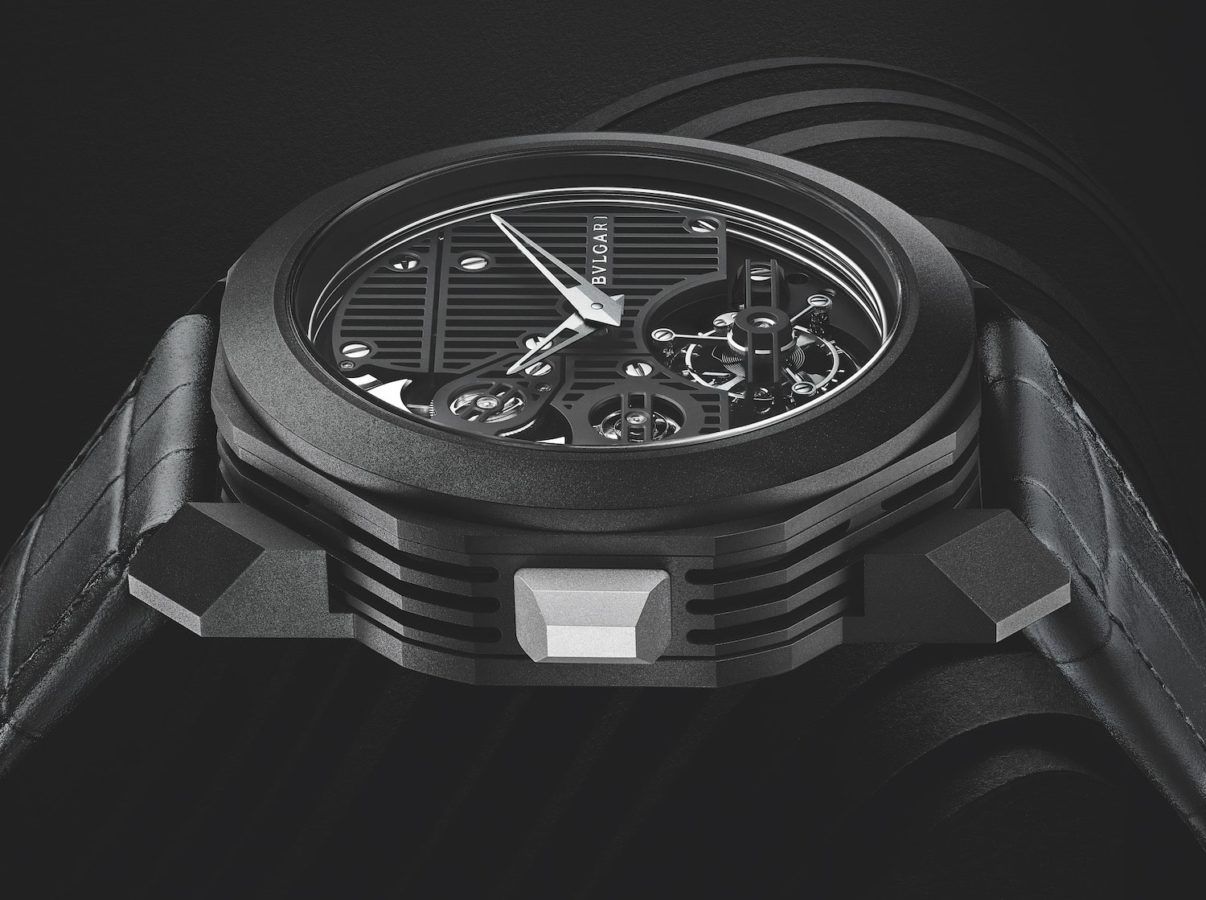 With an impressive string of record-setting timepieces under its belt – seven in seven years to be exact, Bvlgari has shifted the paradigm of modern-day haute horlogerie. Highlighting its watchmaking prowess in a deft balance of savoir faire and innovative aesthetics, the maison has undoubtedly established itself as a Master of Estetica della Meccanica – Italian for Aesthetic of Mechanics.

The unique fusion of cutting-edge design and unparalleled technical expertise of Swiss watchmaking is evident in Bvlgari’s mastery of hyper-complicated watches, which includes an exquisite range of chiming timepieces.

Further cementing its leadership in this field, the house presents another Sinfonia della Meccanica (Symphony of Mechanics) with the Octo Roma Carillon Tourbillon. The creation is a beautiful combination of two of its predecessors – the minimalist and austere two-hammer Octo Finissimo Minute Repeater Carbon, and the opulent yet complex Octo Roma Grande Sonnerie Perpetual Calendar that is equipped with four hammers.

Antoine Pin, managing director of the Bvlgari Watch Division, explains the reason behind creating the new timepiece, “We wanted to develop a very modern look, a look that doesn’t reflect the past like most of the current chiming watches do. Instead, we want to project the watch into the 21st century because we see our chiming collections as an extraordinary platform for future modern product developments.”

A tremendous undertaking requiring utmost precision and technique, a symphony is a large-scale orchestral interlude in which a maestro coordinates every instrument. Expressing the emotion of music with the tiniest complex mechanics is something that can exist only in the watchmaking universe.

In creating the Octo Roma Carillon Tourbillon, the Bvlgari master watchmaker assumes the maestro’s position as he selects, finishes and assembles hundreds of micro components to produce the perfect mechanism. A challenging technical and engineering feat that only the best in the field can execute, Bvlgari chiming watches can require up to 1,200 parts, as in the case of the Grande Sonnerie.

Sound was the main priority when it came to the construction of the calibre BVL428. Manufactured entirely in-house, the all-new manually wound movement is 8.35mm thick and comprises a total of 432 components. As power and clarity of the sound are imperative in a striking watch, the generous proportions of the 44mm watch case are designed to maximise sound reproduction. This allows for increased torque of the three-hammer construction as well as increased power of sound generation.

“While developing this piece, we concentrated our efforts on the magnification of the sound. We started from a white sheet of paper, and we identified some fields to address to optimise sound propagation. We fixed the hammers onto the case of the watch in order to facilitate the transmission of sound waves, we used titanium for the case (a very good transmitter of waves) and we emptied the case itself as much as possible. We also designed the bridges of the calibre to make the propagation of the sound wave easy inside the case as well. You can see this very special grid delivers a unique impression of an engine,” Pin adds.

The openworked titanium middle or caseband was specially conceived for maximum sound resonance. Resembling ventilation slats, the case sides are hollowed out to reduce the amount of metal. Additionally, three openings that correspond with the three chimes allow more sound to exit the chamber. The caseback is also hollowed out and revamped with a meticulously crafted titanium grid that protects this resonance zone and allows sound to be carried to the outside. Meanwhile, the function of the sound mechanism is ensured by a spring contained in a barrel-shaped container drilled directly into the bridge.

While showcasing traditional complications in an ultra-modern setting is something Bvlgari excels in, the maison kicks things up a notch here by reversing the conventional arrangement of a chiming watch movement in the Octo Roma Carillon Tourbillon. This means that the three hammers and three gongs that are usually hidden on the side of the wrist are now on the dial side, so that they can be seen in action without the wearer removing the watch. The movement is equipped with one classical barrel to ensure a power reserve of 75 hours for the movement at full charge. This can be tracked via the exhibition caseback where the rack and snails are displayed as well.

It takes time to create a complex movement for a timepiece as special as this, as Pin points out, “We speak here of a few years to develop such a movement. This time, we’re lucky to be able to base our development work on a historical calibre from the Daniel Roth portfolio. However, it still took us three years to modernise the structure and add our own developments to it. In this case, high technologies are central, but the traditional manual work is mandatory to fine-tune the performance. Thanks to our watchmakers, we can adjust components individually, especially for the chiming system.”

The gongs of the watch are created in multiple stages. First, they are folded and formed by hand before being annealed, or hardened, at a temperature of 900 deg C. Next, they are cleaned before they’re “ironed” in the oven at 500 deg C to impart crystalline resonance to the metal. Like certain components of the striking mechanism, they are lengthened with a file to refine the ringing chords. The melodic sequence of this three-hammer carillon sounding three tones plays the note C for the hours, followed by the mid-re-C notes for the quarters, and the mid-note for the minutes.

The black DLC-coated titanium case with its matte finish, architecture of the movement and slatted bridges come together like a well-orchestrated symphony to reveal the true beauty of the mechanism. Hammers, gongs, tourbillon cage at 6 o’clock and perforated surfaces are crafted in alternating polished steel, while the finely wrought mainplate and bridges have been treated with PVD. The high-tech carbon-based vacuum deposition is elegant in a sleek deep black. Its construction is protected by a titanium case fitted with a push-button on the left side for the carillon.

While Pin agrees that the timepiece is one for collectors and connoisseurs, he hopes to pique the interest of more enthusiasts, “We also wanted to create a product that would raise the interest of watch amateurs, who won’t usually consider this product category. This was why we went for a very modern design with the titanium with a black DLC treatment.”

Available in a limited edition of only 15 pieces, each Octo Roma Carillon Tourbillon is engraved with a number from 1 to 15 on the crown to indicate its singularity within the edition. Water-resistant to 30m, the watch is presented on a black alligator leather strap with a DLC-coated titanium folding clasp.