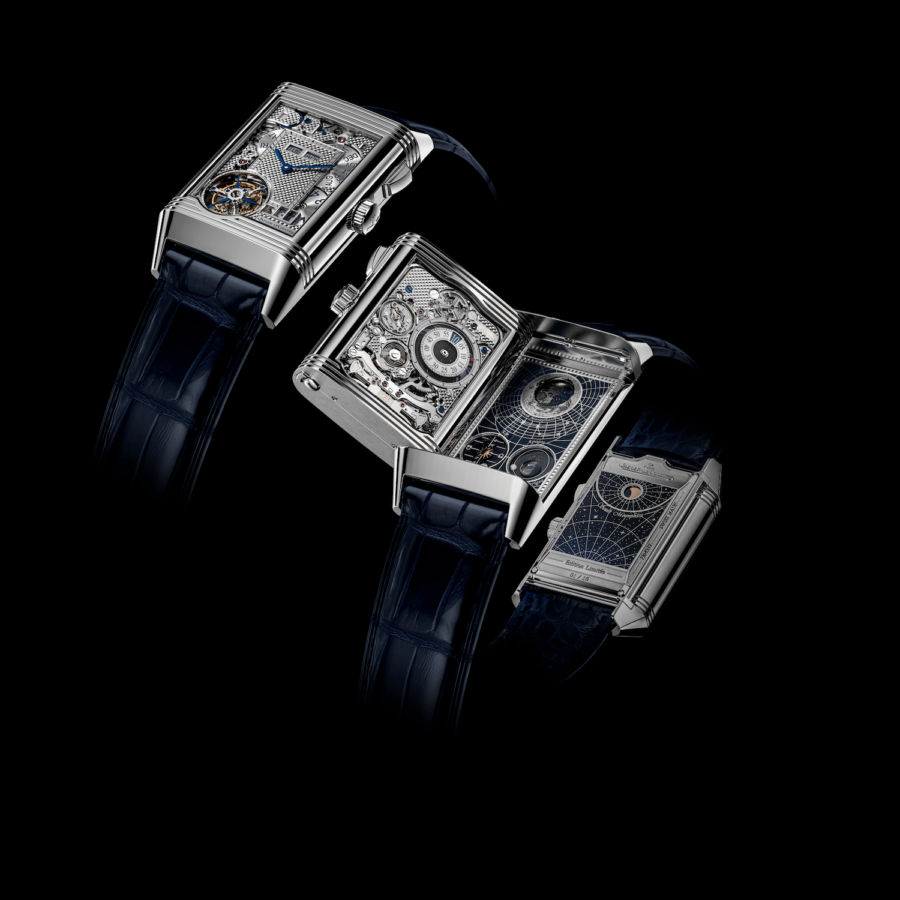 A combination of Jaeger-LeCoultre’s unparalleled mastery of chiming watches, precision mechanisms and astronomical complications, the Reverso Hybris Mechanica Calibre 185 Quadriptyque is easily one of the most phenomenal novelties launched at Watches and Wonders 2021. Commemorating the Reverso’s 90th anniversary this year, its unique design has enabled the manufacture’s watchmakers to build the world’s first wristwatch with four faces.

Lionel Favre, Jaeger-LeCoultre’s product design director, credits the stunning showpiece to teamwork: “We’re really proud that it’s a very collaborative project. We have 180 skills under one roof at Jaeger-LeCoultre, so the watch is a testament to what we can do when the teams are able to discuss, contribute ideas and challenge themselves.” As the timepiece incorporates three displays of lunar information on the interior face of its cradle, it can predict the next global incidence of astronomical events such as supermoons and eclipses. Never have all these complications been presented together in a wristwatch, which makes the Quadriptyque the world’s first to provide such a deep reading of the cosmos.

Its dual-faced case is powered by the in-house Calibre 185, while a double-faced cradle showcases indications that are synced and updated by the primary movement every day at midnight, with the use of an ingenious mechanical system proprietary to Jaeger-LeCoultre.

The result of six years of development with 12 patents, the masterpiece boasts an incredible 11 complications that tell the story of cosmic and terrestrial time, all within the confines of a 51.2mm by 31mm by 15.15mm white gold case. However, a watch with a multitude of complications is pointless unless they are legibly and comprehensibly displayed. Featuring user-friendly design and construction, the most complicated Reverso to date fulfils all the requirements and is extremely easy to wear. 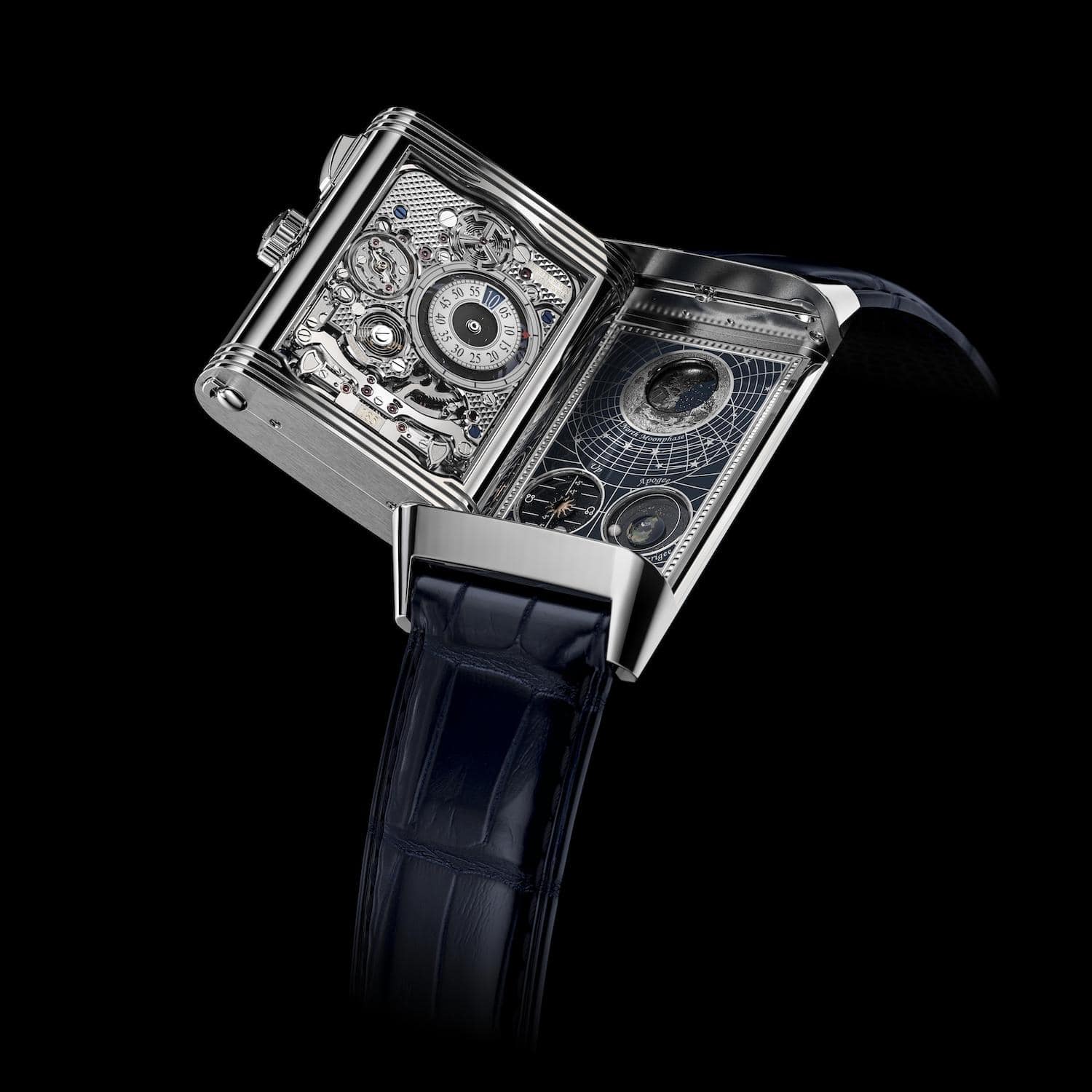 Matthieu Sauret, the maison’s product marketing and heritage director, reiterates: “At Jaeger-LeCoultre, we always try to create watches that are meant to be worn. We’ve improved a lot since the 2006 Triptyque model because the Quadriptyque is much thinner at a very wearable 15.15mm with more complications. It is for lovers of watchmaking art that includes incredible displays of complications and finishings alike. It’s also really for people who want something historical because this is a piece of history as far as our maison or even watchmaking is concerned.”

The first face of the watch features an instantaneous perpetual calendar with grande date and indications for the day, month, year, leap year and day/night indication. A flying tourbillon is visible at 7 o’clock via an aperture in the dial. On the flip side is a secondary time display with digital jumping hours and peripheral minutes. But the beauty of this face is the exposed components of the minute repeater – a complication only a few manufactures such as Jaeger-LeCoultre can develop and produce in-house. While there usually is a slight gap of silence between each set of chimes for minute repeaters, the maison has succeeded in entirely eliminating these gaps for uninterrupted acoustic excellence.

Housed on both sides of the case cradle are the other two dials. For the first time in mechanical horology history, the maison unites three displays of lunar information on the inner face of the cradle. Favre reveals that this was the most complex part of the watch to create and also his personal favourite face: “It was really challenging for the craftsmen to manage all three cycles on this lunar dashboard, as each one has a different length of days, which creates a higher mechanical complexity. 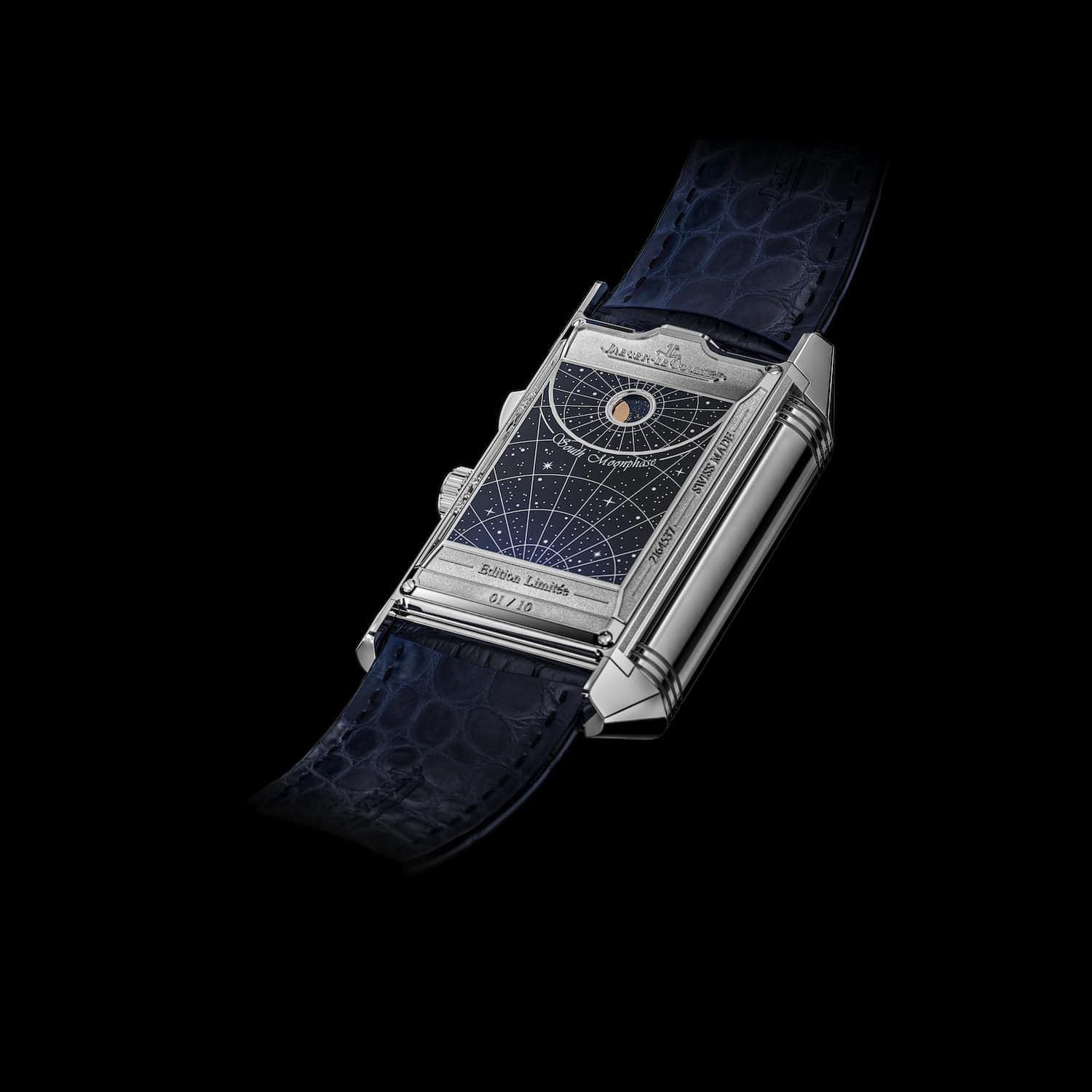 “In terms of design, we wanted to connect people with the cosmos. The idea was not to make a display with hands or numbers, but one with realistic elements like the earth and moon. I’m really proud because this is not only an engineering feat, but an artistic one.”

On the display’s top half is a laser-engraved moon that is progressively covered and revealed by a mobile blue lacquer disc with gold glitter decor, which corresponds to the age of the moon in the synodic or lunar cycle. On the bottom left is a counter with a three-dimensional micro-sculpted pink gold sun orbited by a tiny hemispherical moon. This showcases the draconic cycle, when the path of the moon intersects with the orbit of the earth around the sun (known as the ecliptic). To the right is a domed representation of the earth, micro-painted in enamel with a hemispherical moon in eccentric orbit around it. This counter represents the anomalistic cycle, which shows the varying distance between the earth and moon. Lastly, the fourth face on the caseback depicts the moonphase as seen from the southern hemisphere.