Jet-set in style with these world timers and GMT watches 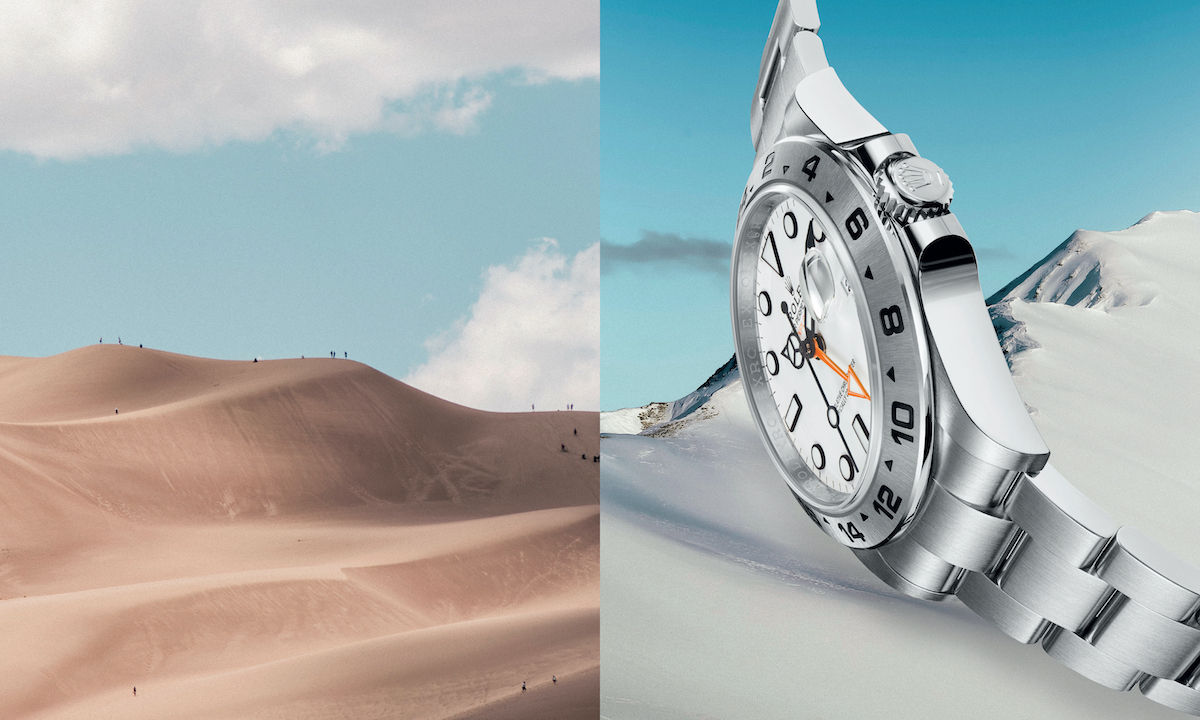 With more international borders opening up, a world timer or GMT watch is a travel essential.

A world timer or GMT watch allows you to take note of various time zones from across the world. No Google search needed here, so this makes a handy travel tool when you find yourself without data. These travel watches boast ingenious complexities and complications for effortless globe-trotting. Ahead, we have a selection of world timers and GMT watches from Rolex, Ulysse Nardin, Tag Heuer and more. 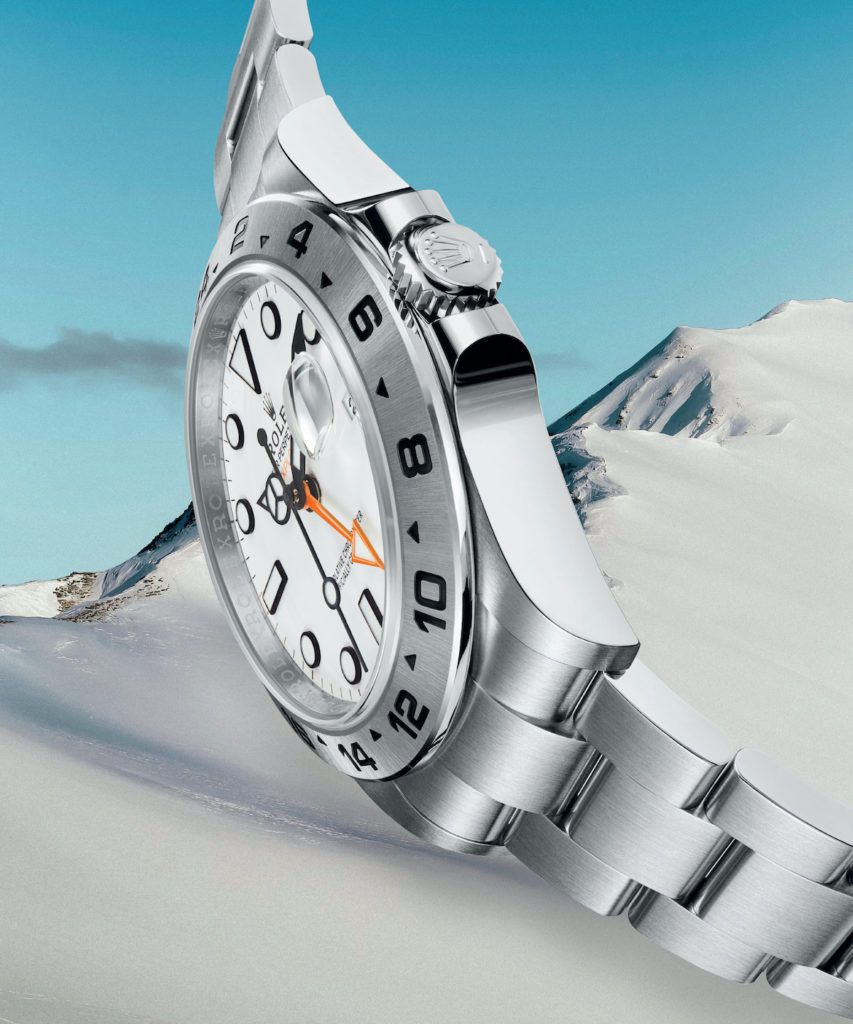 Created for the intrepid explorer, this new-generation Oyster Perpetual Explorer II in Oystersteel features an updated case and bracelet for enhanced visual harmony. And thanks to its 24-hour display comprising an additional orange hour hand and engraved bezel, day- and night-time hours can be easily distinguished, which is useful if the wearer is in a location like the polar regions during certain times of the year. The 24-hour display can also be used to show a second time zone. Courtesy of innovative and exclusive luminescent material, the optimised Chromalight display sees a longer lasting blue glow intensity emitted by the hour markers and hands in dark conditions. In daylight, these display elements boast a brighter white hue. The 42mm model is powered by the calibre 3285, a self-winding mechanical movement with a 70-hour power reserve, and carries the Rolex Superlative Chronometer Certification. 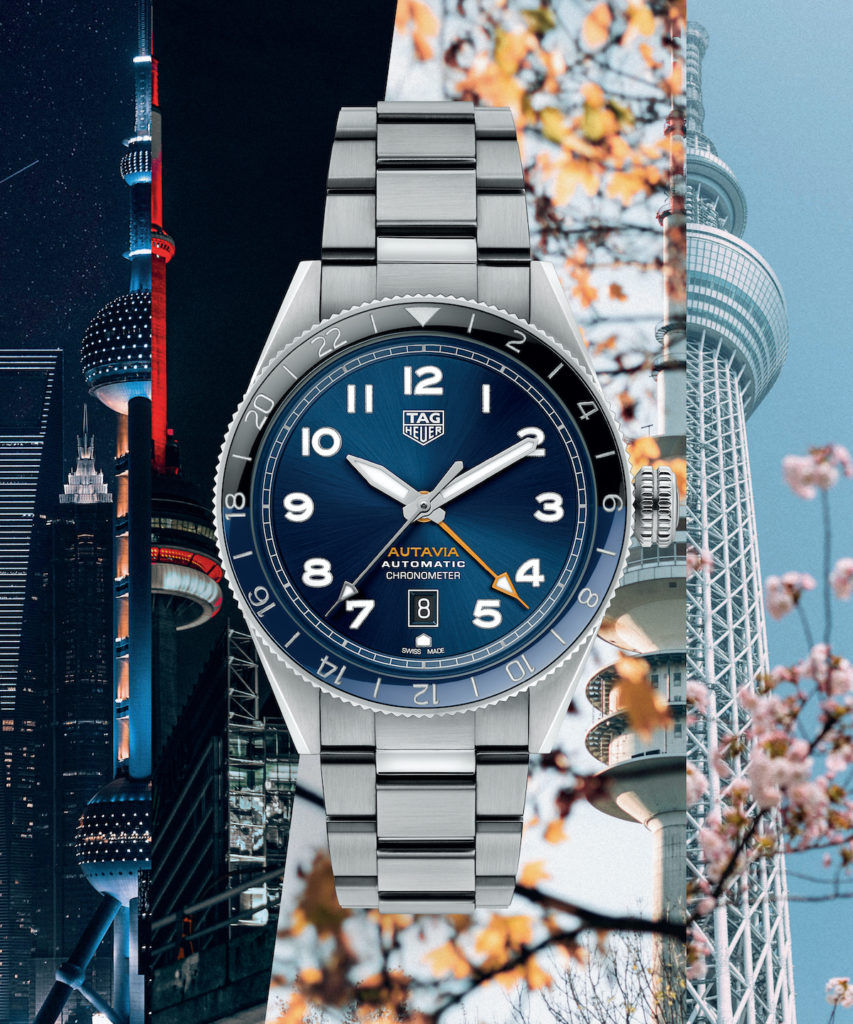 The manufacture marks the 60th anniversary of its legendary Autavia collection with three new models, including the line’s first three-hand GMT pictured here. Equipped with the Calibre 7 COSC GMT movement, the handsome 42mm model immediately captures attention with its radiant blue sunray-brushed dial, alluring blue and black ceramic bezel set against a polished stainless steel case, as well as numerals and hands coated with Super-LumiNova for perfect legibility. All three new Autavia iterations
are presented either on a stainless steel bracelet or an alligator leather strap fitted with a double push-button deployant clasp. The easy strap interchangeability on all the models offer wearers more style options as they can purchase additional straps if they wish – perfect for the style-conscious traveller. 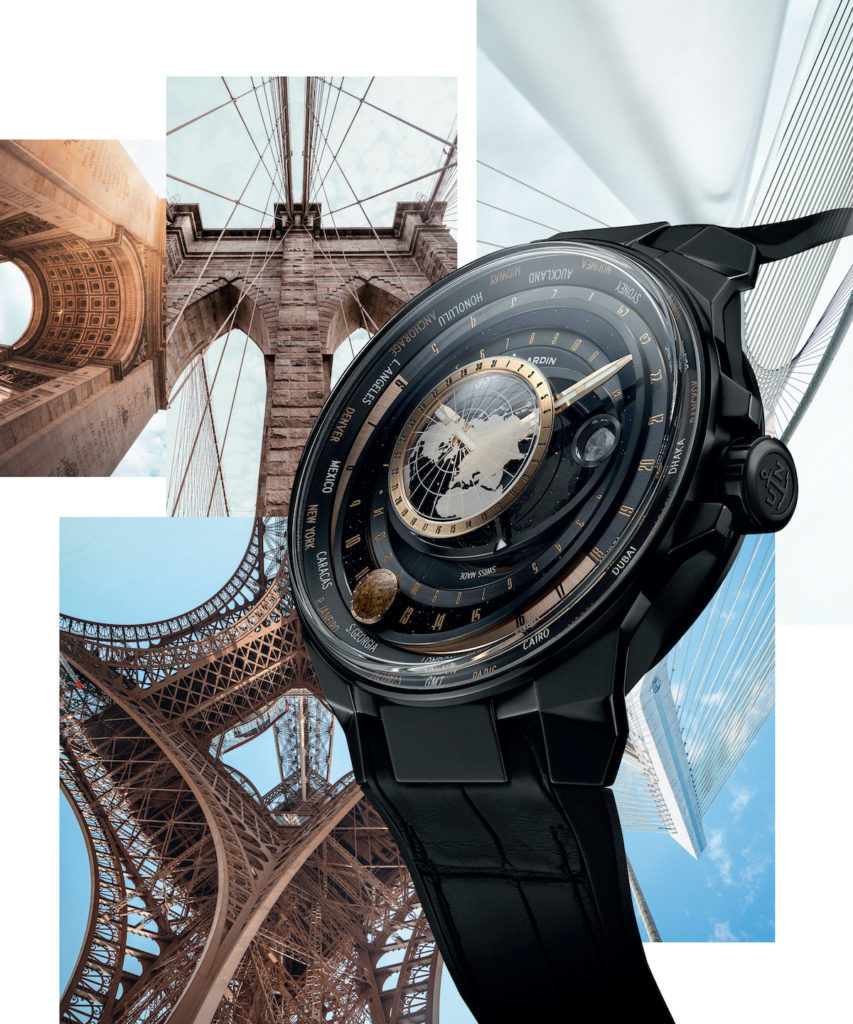 Feast your eyes on the maison’s ultra- cool version of one of its astronomical complications – the Moonstruck. To accentuate the sensation of being at the heart of the universe, astronomical watch designer, Ludwig Oechslin, placed the part of the northern hemisphere as seen from the North Pole, at the centre of the sapphire crystal. Increasing the 3D effect is a domed crystal – with land masses micro-engraved on the inside – set in the sapphire crystal box encircled by an engraved date ring in rose gold. Apart from the time display set against an aventurine disc representing the night sky, times around the world can be read with the fixed flange featuring reference cities in 24 time zones. Also displayed on a rotating disc is a sun in relief and time indications from 1 to 24 hours. Housed in the geometrical 45mm case of a Blast timepiece, the watch also has a dual-time mechanism. A moonphase adds relief and visual interest to the dial in black ceramic and black DLC-treated titanium. The astronomical creation is presented with three black straps in alligator, velvet and rubber to suit any mood or occasion. 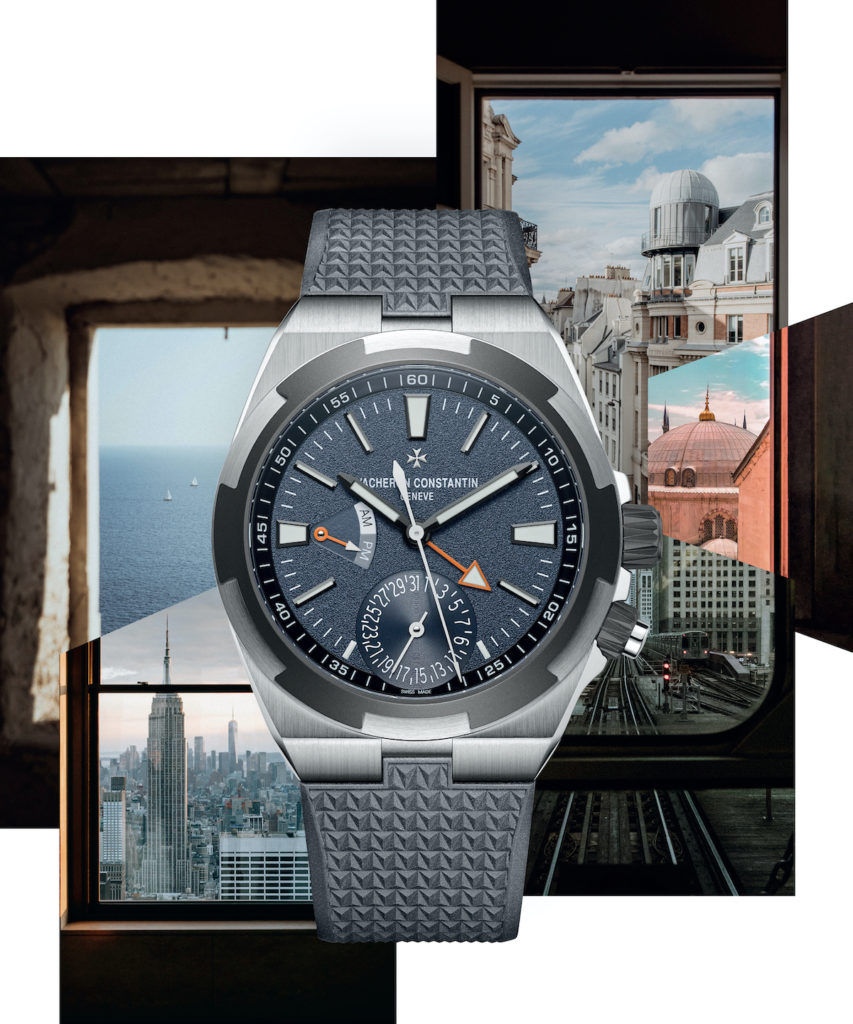 The manufacture’s Overseas collection welcomes two new models: the Overseas Chronograph Everest and, shown here, the Overseas Dual Time Everest. Boasting rugged, dashing looks, both numbered 150-piece limited editions are ideal for everyday wear and the most daring feats. Flaunting a 41mm case made from a combination of titanium and stainless steel, the Overseas Dual Time Everest is driven by the self-winding 5110 DT/2 movement, which enables the simultaneous reading of two time zones. In addition to classic local-time indications, a fourth arrow- tipped orange hand displays the home time. This is coupled with a day/night indicator in the same bright hue. The pointer-type date display at 6 o’clock is synchronised with the local time, which can be adjusted by a dedicated pusher. The two time zones at 12 o’clock can be corrected by turning the crown in either direction. Visible through the exhibition caseback, the anthracite grey NAC treatment on the baseplate lends the movement a contemporary aesthetic. Adding the finishing touch is a 22k pink gold oscillating weight adorned with an engraving of Mount Everest that draws from a photograph by American mountaineer, Cory Richards. 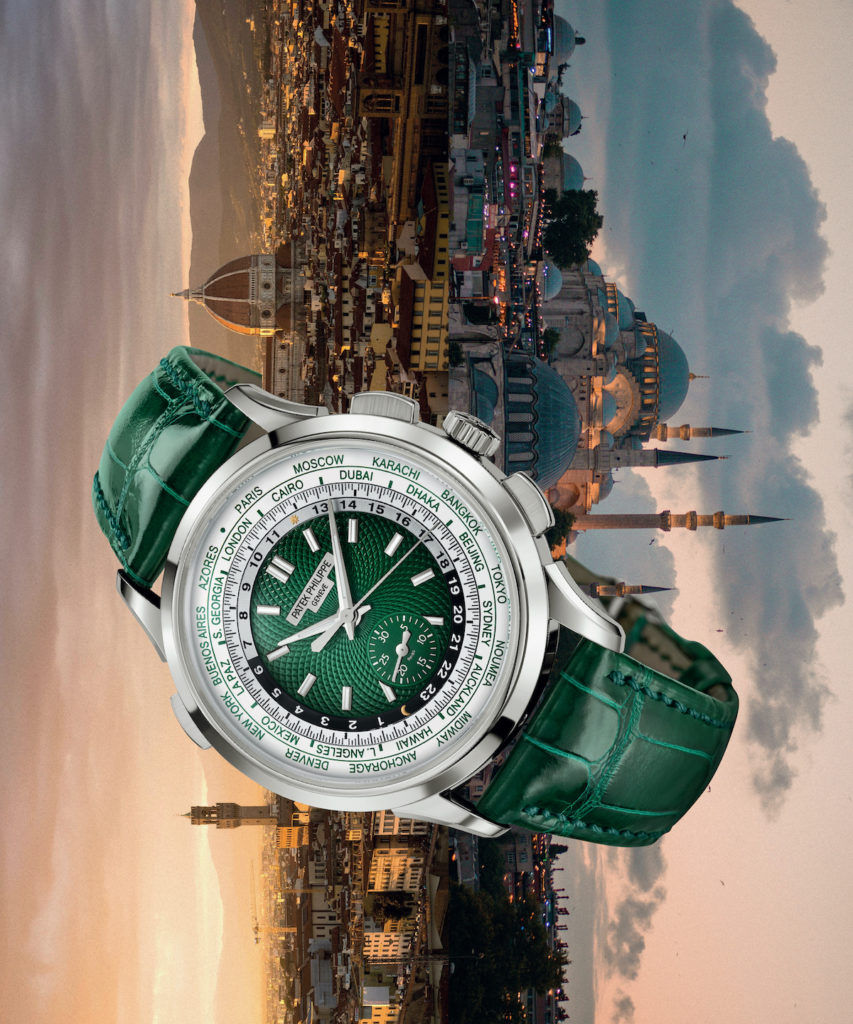 The ref. 5930p-001 self-winding world time flyback chronograph is available in a new iteration combining the brilliance of platinum with a vivid green dial and strap. It is an unexpected blend of classicism with a cosmopolitan spirit and boldness that endows the singular personality of this cult model, which is inspired by a one-of-a-kind timepiece from 1940. The dial centre bears testament to patek philippe’s mastery of fine craftsmanship through a circular hand-guilloched pattern. Since calibre ch 28-520 hu is equipped with a column wheel and the modern disc-type vertical clutch, the central chronograph hand can also be used as a running seconds display. The world time function simultaneously displays the time in 24 time zones, with the names of reference cities printed in green on a corresponding disc. To change time zones, an exclusive patented mechanism enables correction of all displays by pressing the pusher at 10 o’clock without affecting the accuracy of the movement. 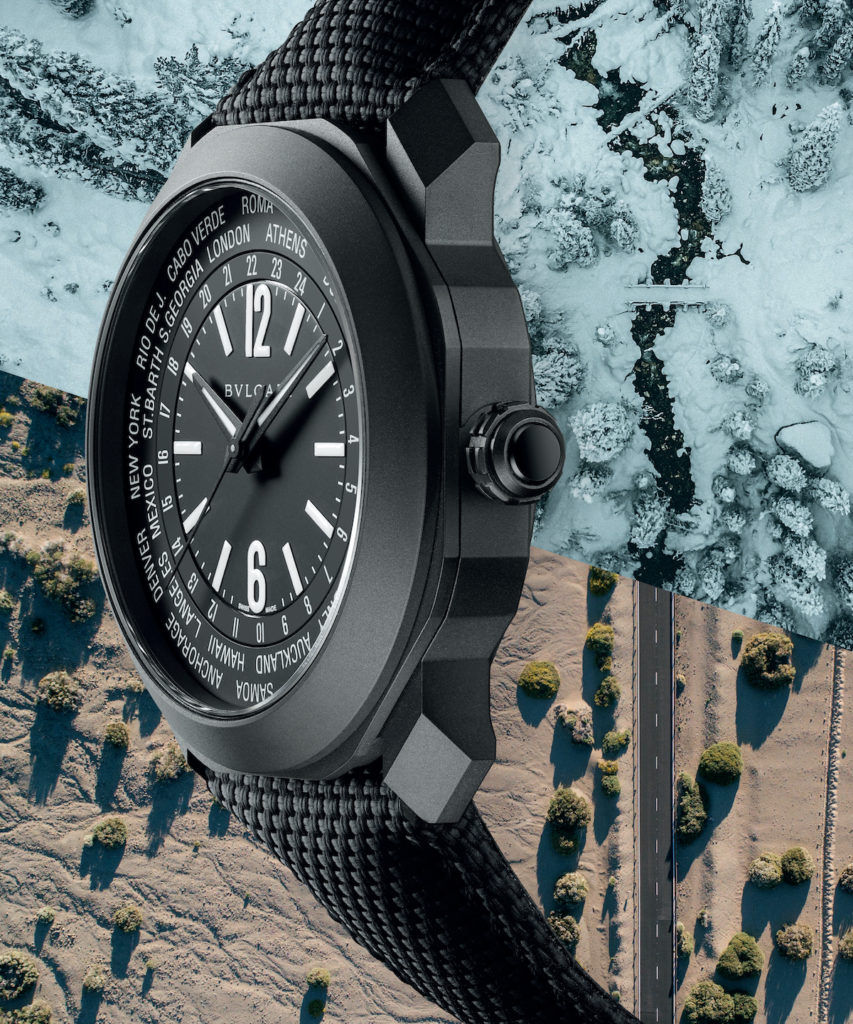 The Octo Roma WorldTimer renews the genre of a classic function and propels it into the contemporary world. Dressed in the unmistakable Octo Roma case, the timepiece is designed for globetrotters as it allows for the instant reading of 24 time zones. This version of the world time function is driven by the BVL 257, a new integrated movement developed and produced by the brand’s manufacture in Le Sentier. The dial features a central display of the hours, minutes and seconds combined with a double rotating disc on the outer edge: one for 24 reference cities and another with a 24-hour graduated scale. Together, they enable simple and immediate reading of the time. The Octo Roma WorldTimer lets you travel the world in lavish Bvlgari style as it features certain cities where the brand has a hotel or plans to open one. The elegant, understated model is offered in satin-brushed and polished stainless steel, or black steel livery with sandblasted surfaces as seen here. 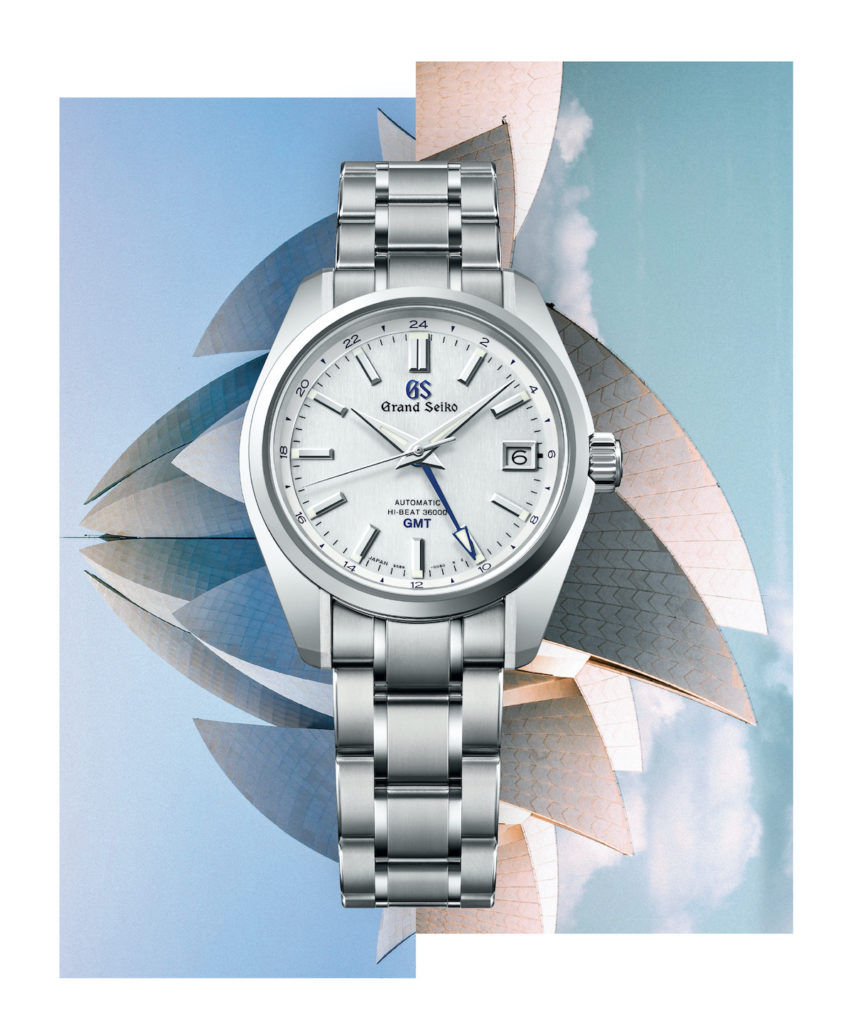 The iconic 44GS turns 55 this year and Grand Seiko is marking the occasion with the new Hi-Beat 36000 GMT 44GS 55th Anniversary edition (SBGJ255), which joins the manufacture’s Heritage Collection. Issued in a limited edition of 1,200 pieces, the lightweight titanium model features a white dial with a soft sheen that contrasts perfectly against the blue letters of “GS” and “GMT”, which match the blued-steel GMT hand. Driving the 40mm timepiece is the hi-beat 9S86 automatic movement with 55 hours of power reserve. The GMT hand and the 24-hour inner bezel ring allow the time in a second time zone to be read easily, while the hour hand can be adjusted independently without stopping the watch. In honour of this special anniversary, the model bears the iconic Grand Seiko lion emblem on its titanium oscillating weight in a gold tone that is achieved via anodic oxidation. 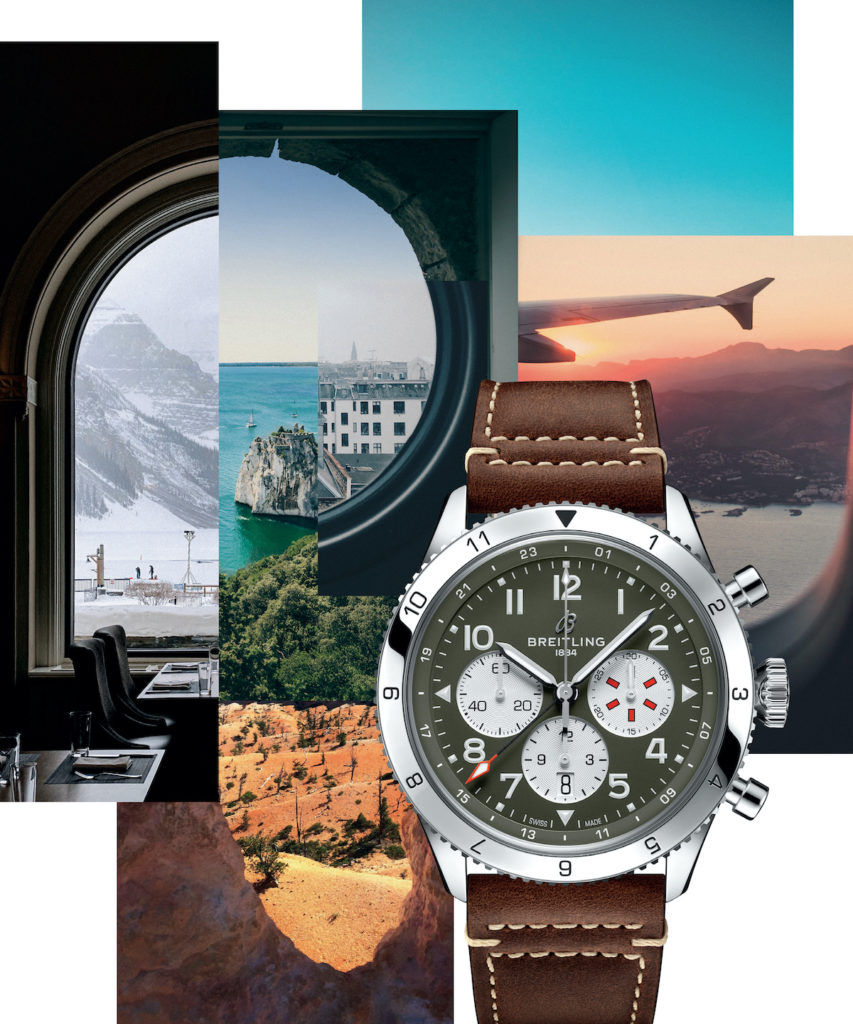 Super AVI, the newest watch series from the Swiss manufacture, celebrates aviation history with designs inspired by the original 1953 Co-Pilot Ref. 765 AVI aviator’s watch and four legendary planes: the North American Aviation P-51 Mustang, Vought F4U Corsair, Curtiss P-40 Warhawk, and the de Havilland Mosquito. The range offers five unique chronograph GMT variants that pay tribute to the four iconic aircraft, whose silhouettes adorn each of the watches’ exhibition casebacks. Pictured here is the the Super AVI Curtiss Warhawk. Apart from a military-green dial and white contrasting chronograph counters, the red accents play on the model’s namesake plane’s famous shark-mouth art on its nose that gave it its unmistakable identity. The rugged 46mm timepiece is powered by the manufacture Calibre B04, a self-winding, COSC-certified movement with a 70-hour power reserve. 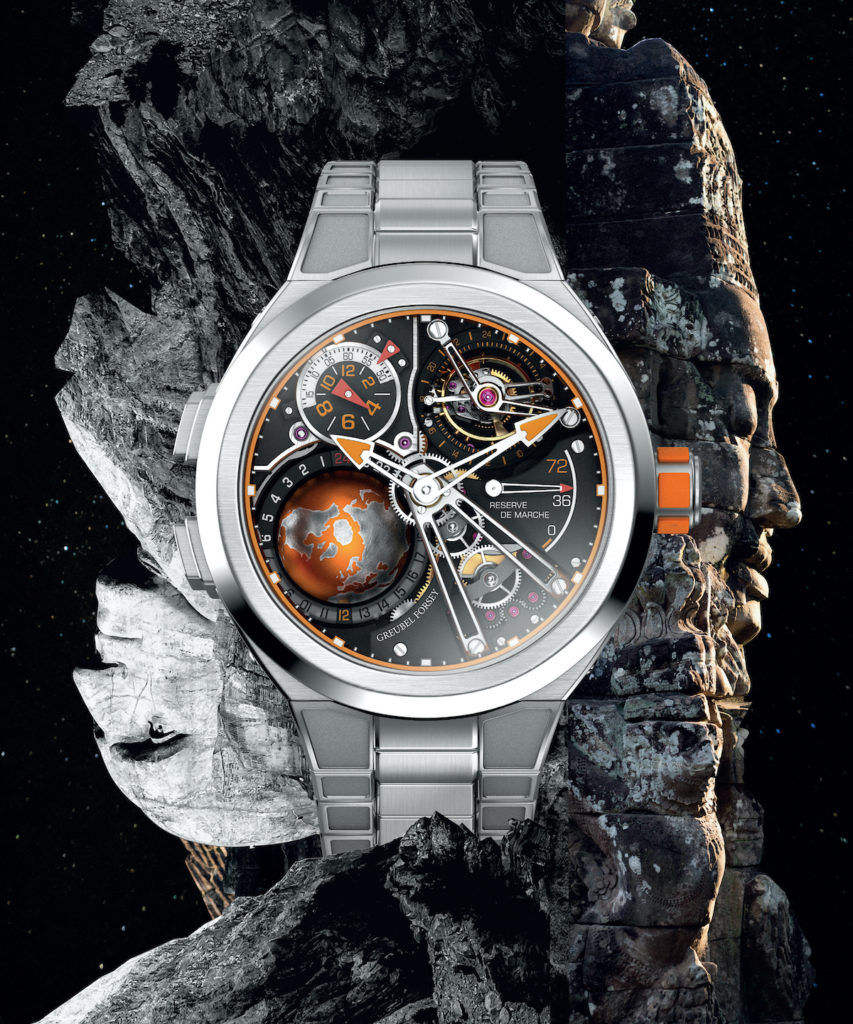 It takes a strong personality to carry off the imposing GMT Sport “Sincere Fine Watches Special Edition”, developed by the Swiss maison in a contemporary and edgy orange version. The new case features a horizontal satin finish, highlighting the distinctive profile of the GMT Sport’s bezel: an elliptical shape that is slightly curved to fit the wrist contours. Despite the complex looks of the 45mm titanium GMT, its functions are arranged in an intuitive order with central hours and minutes, and second time band at 10 o’clock, power reserve at 3 o’clock, and globe at 8 o’clock. A key visual element of the watch, the globe offers a three-dimensional time display patented by Greubel Forsey. It performs a complete rotation in 24 hours, allowing universal time to be read easily. As if seen from above the North Pole, a ring with 24-hour markings allows local time to be read for all longitudes, while also acting as a day/night indication. On the caseback, a disc displaying city names surrounded by two rings allows the wearer to read Universal (UTC) and summer time for 24 cities in 24 major timezones. For this five-piece special edition reserved for the Sincere Group across Singapore, Malaysia and Thailand, straps are presented in three options – traditional black, textured orange rubber, and an all-new ultra-light titanium integrated bracelet that is a first for Greubel Forsey.